What is AMD Smart Access Memory – And Is It Worth It? 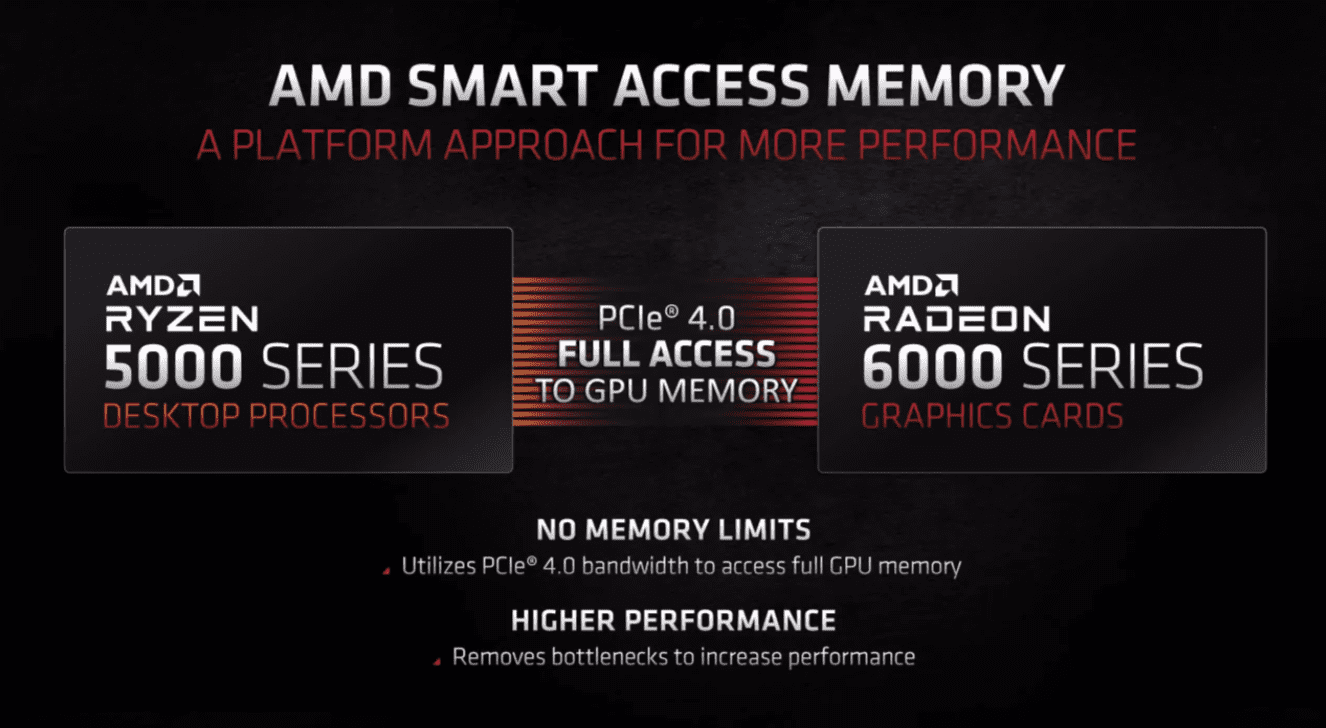 Despite being diehard PC fans, we believe that the best way to begin this article is with a video from a console title. Specifically, one of the first “boss fight” in the PlayStation 2 classic God of War 2:

This might not look impressive by today’s standards, but it was awe-inspiring at the time of release. More powerful consoles were available (OK, the Xbox). The almighty PCs already had much faster CPUs, heaps of RAM, and more advanced dedicated GPUs. Still, both were struggling to produce similar combinations of graphical fidelity, full-screen motion of high-poly models, and dynamic lighting.

However, what’s really impressive is that this 14-year-old game was running on over 20-year-old hardware. For, yes, it’s been over two decades since the PlayStation 2 was released. Why are we ranting about consoles and their games? When will we touch on the actual topic at hand? Well, we already did!

One of the primary reasons God of War 2 was possible on the lowly PlayStation 2, whose GPU ran at around 145 MHz and CPU at 299 MHz, was that they both had access to the same RAM. The same is true for many of the consoles that followed. It’s one of the reasons their frozen-in-time hardware manages to keep up with the ever-evolving hardware in our PCs. And that’s precisely what AMD (and “friends”) bring to PCs with Smart Access Memory.

Have we piqued your interest? Let’s dive deeper and see what this means for our computers and, more importantly, gaming on them.

Contents hide
1 What is Smart Access Memory?
2 Why Should You Care?
3 Does It Work?
4 What About Nvidia/Intel Fans?
5 Is It Worth It?
6 Related

Have you ever heard the famous quote “640 KB ought to be enough for anybody” that’s misattributed to Bill Gates? Well, just like old PCs had to deal with that limitation, it turns out that a similar bottleneck existed in our PCs for years.

Although it’s been eons since GPUs broke the GB barrier, our CPUs can still only access up to 256 MBs of that memory. It would be simplistic to say that out of your GPU’s multiple GBs of VRAM, the CPU can only “use” 256 MBs. However, in some regards, it’s true.

When playing a game, both the CPU and GPU work to produce what we see on our screens. If they both need to work on the same 1 GB of data, the bottleneck in the communication between them means that the CPU can only “push” 256 MBs of data to the GPU and store the rest in system RAM. When the GPU is done with them, it has to ask the CPU to fetch more data from the system RAM. Rinse and repeat.

This bottleneck restricts the amount of data on which our PC’s CPUs and GPUs can, for lack of a better term, “collaborate”. On top of that, the continuous back-and-forth introduces lag and puts some extra load on the CPU.

AMD’s Smart Access Memory (SAM) is (part of) the answer to that problem. SAM was initially advertised as a feature of AMD’s Ryzen 5000 CPUs. Soon after, AMD announced it would also bring the feature to Ryzen 3000 CPUs. However, SAM also demands a 500-series motherboard and either an RDNA2 GPU by AMD or an Ampere GPU by Nvidia. Yes, Nvidia.

Despite being advertised as a Ryzen feature, SAM isn’t an AMD-only solution. Quite the opposite, SAM is AMD’s take on what’s best known as Resizeable Address Register or, for short, Resizable BAR. What might sound strange, though, is that Resizable BAR isn’t something new. It’s even older than the PlayStation 2 we talked about earlier, and a part of the PCI Express 3.0 standard from back in 2008.

Why Should You Care?

Admittedly, we exaggerated a bit. PlayStation 2’s unified memory approach wasn’t the sole reason God of War 2 looked so impressive on it. However, without it, games like God of War 2, Shadow of the Colossus, or Metal Gear Solid 3 would be impossible on Sony’s ancient by today’s standards console.

A unified memory approach means that both the CPU and the GPU can access the same RAM and work on the same datasets. This immediacy eliminates the push-pull relationship they had in the PC space up to now.

The result should be increased framerates and maybe even perceptibly reduced stuttering/latency on resource-intensive modern titles. Still, that’s for current titles, and increased framerates are the given but not sole benefit. Future games that take advantage of the closer, quicker collaboration between CPU and GPU, could also show more impressive graphics.

Yes, we know it sounds too vague, too general. That’s because the only examples we’ve had up to now of how such a feature could be best utilized was from the world of consoles. It’s a new approach for PCs, and how (and if) each dev will take advantage of it is up to them.

Although we presented it as such, we admit we lied: SAM/Resizable BAR isn’t an equivalent to unified memory. It’s not like the system RAM and GPU’s VRAM suddenly become a whole from which the developers can choose how much memory to allocate to either depending on the workload. It’s also different than SoCs and embedded GPUs, where it feels as both the CPU and GPU are fighting for the same piece of memory pie.

SAM/Resizable Bar allows the CPU direct access to the GPU’s VRAM through a virtual tunnel created between them. Its sole purpose is to minimize the barriers between them, not to combine their different memory types in one pool. Its goal is to enable more efficient communication between them, leading to increased performance. And, from what we’ve seen up to now, it delivers.

People all around the Internet, from trusted outlets like Techspot and PC Gamer to users on Reddit, claim performance gains that in some cases exceed 10%. Not bad for a feature that, despite AMD’s original advertising, will soon be an industry standard, available to everyone.

Still, you might have noticed we said “in some cases”. That’s because the 10% improvement is not a given. Just like in many cases SAM/Resizable BAR lead to improved performance, in many others they don’t lead to any visible difference. Even worse, some report performance regressions on titles like Battlefield V (on DirectX 11 and Ultra Quality) when enabling SAM at lower-than-4K resolutions.

AMD was at the privileged condition of controlling all aspects of the Resizable BAR equation for its hardware: CPUs, GPUs, and motherboards. So, although Resizable BAR “was a thing” for decades, it lay dormant, unused, waiting for the stars to align.

With AMD releasing the cat from the proverbial bag, everyone else jumped on-board. They might not have adopted AMD’s new name, but the feature is the same, and all hardware that supports it is compatible.

You can take advantage of Smart Access Memory on all-AMD systems with modern motherboards, Ryzen CPUs, and Radeon GPUs. However, you can also use Resizable BAR on an Intel-based system with either an AMD or Nvidia GPU. The results are similar for both AMD-based and “hybrid” setups: many games see a small but sometimes perceptible improvement in performance. Even more titles don’t, and the difference is negligible. And there are also the admittedly more fringe cases of games where the performance drops (although not significantly) after enabling the feature.

As for why Smart Access Memory is presented as a golden pill that can work as a universal solution, the reason is almost fully irrelevant with the tech underneath. Instead, it’s defined by a single word: marketing.

Is It Worth It?

There’s no reason to ponder over the usefulness of Smart Access Memory. The feature has already been considered A Good Idea, accepted, implemented in the PCI Express 3.0 standard, and… Well…

That was where its story ended, the point in time where this Good Idea went into hibernation. Like a digital fairy-tale, decades later, AMD found itself in the perfect position to wake the sleeping beast.

Do note, though, that SAM/Resizable BAR isn’t a switch that you flip and everything goes faster. The increase in performance isn’t a constant. There are cases where Smart Access Memory/Resizable Bar doesn’t seem to affect a title drastically. Cases where there’s only an imperceptible single-digit framerate difference.

We’re sure that in the future, the situation will change. More modern titles will take advantage of the faster collaboration between CPU and GPU to produce stunning visuals. For current titles, though, it’s more of a nice-to-have bonus that gives a slight boost to framerates. Not an earth shattering must-have new feature for which you should rush to upgrade your rig.