Sudden FPS Drops: What Is Causing Them & How to Fix Them? 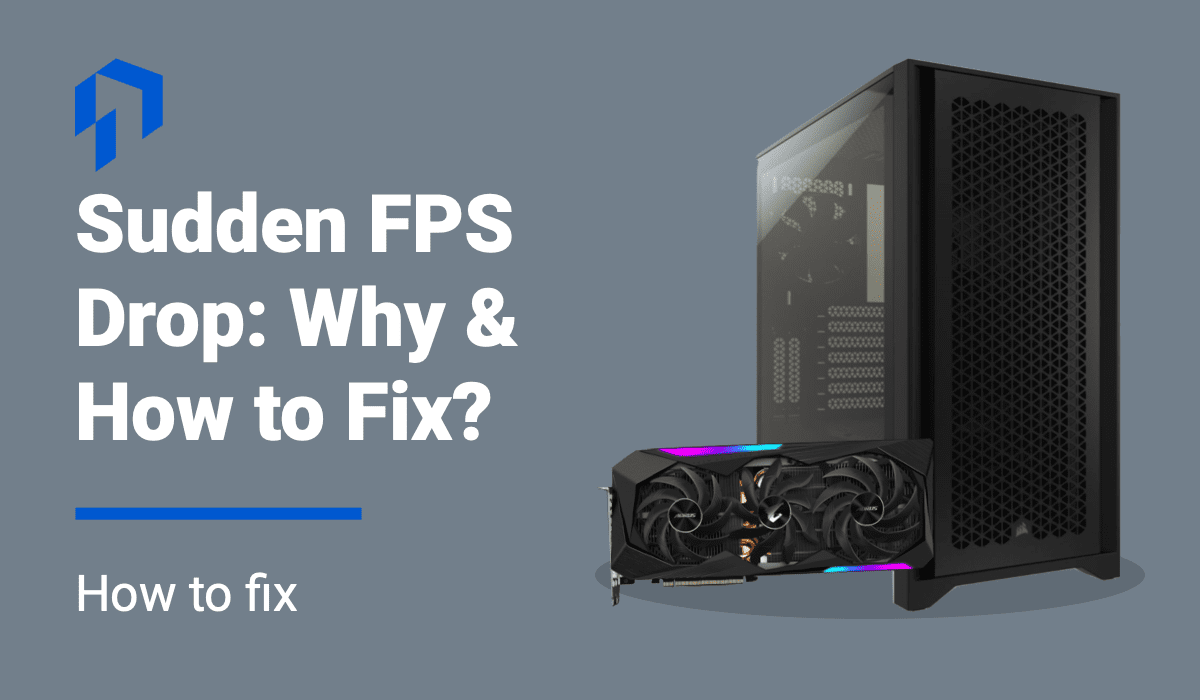 Sudden FPS drops or performance issues in games are frustrating. FPS drops that occur after some hardware change or game update are often easy to tack, but what about other situations? The possible causes are numerous and almost impossible to track, making fixing the issue particularly difficult.

The tough part is finding out what is causing the sudden drop in frames; most of the time, fixing the is simple, although some causes can be expensive to challenge. As with most computer issues, the problem will fit into one of two categories: software issues, or hardware issues.

Here, we will explore some of the more common reasons for FPS drops as well as how to fix them. Keep in mind that some of these may be temporarily out of your control; a game update that affects most people, for instance, will need to either be rolled back or fixed by the developer before changes are seen. Taking a moment to check if other people are also experiencing FPS drops after changes is a good way to save yourself a headache.

One of the more common issues that leads to FPS drops is an unknown driver change. Especially for gaming, the GPU is one of the most important components of a computer and directly affects performance. NVIDIA and AMD release consistent updates for most of their cards to better performance for new games as they release.

These updates are downloaded in the form of drivers; depending on how you set up your computer, these drivers may install automatically. While the companies obviously try to keep performance at its highest level, sometimes unforeseen issues can arise.

If you notice sudden FPS drops or spikes in games that previously ran fine, you should double-check your drivers. Issues can arise on both sides of the isle; a new driver may have released that negatively affected your game’s performance, or a game update caused old drivers to become out of date. If you are unsure of what driver you have, update to the newest available and see if problems persist.

Luckily, both NVIDIA and AMD’s driver software makes it easy to update or revert drivers in case this situation appears. NVIDIA users should use their GeForce Experience program to keep up to date with drivers or roll back to an earlier version that did not cause issues. AMD users can do the same with the Combined Chipset and Radeon Graphics Driver Installer. Alternatively, if you are not interested in automatic updates, you can download the newest drivers from their respective websites.

Other software updates can also cause issues to develop. Depending on the game, you may be able to revert to an older download for testing. If FPS drops continue, the issue is something else. If they stop, it means that the game’s update is the cause of issues – you can likely report the issue to the developers so they can work on a fix.

However, reverting game versions is impossible for online games and increasingly difficult even for single player experiences. In these cases, stick to other tests on the list and weed them out first.

Alternatively, other software running in the background may be the cause of issues. If you run multiple programs at a time, installed something new, or had an update to other software on your computer, they may cause issues. Try running the game without other software and see if problems persist.

Thermal throttling can affect any PC component. When temperatures raise too high, parts such as the CPU or GPU will automatically hold back their performance to stay within safe parameters. This is a hardware issue that is most often fixed by improving the cooling within your computer.

You can confirm that issues are caused by thermal throttling by monitoring your CPU and GPU temperatures while in-game. Many modern games include options to display these numbers while you are playing; otherwise, you can easily download a third-party application that gives real-time readings.

How to Find Out If You Are Experiencing Thermal Throttling

Temperature maximums can vary between devices, but in general, most components operate best under 80°C. Due to variances in temperature thresholds, however, it is often best to measure thermal throttling using frequency monitoring.

Frequency monitoring measures the CPU or GPU’s speed at certain intervals. One or two second intervals are most common, but some third-party applications let you alter the timing. Most programs take this number and compare it against the speed that Windows says the component is operating at. Given as a percentage, you want them to be as close as possible, with 90% or higher representing no issues.

Only a select few games support frequency monitoring, so a third-party application is likely required. Notably, most Valve games have a command line that does display this information. You are in luck if your issues occur in CS: GO or Portal!

Frequency monitoring is most applicable to CPU issues, but the process also applies to graphics cards. If you are using a third-party application and have a second monitor, have a graph of temperature changes open while you play. When you notice an FPS drop, look at the charts. If the operating temperature raises during that time, you are likely experiencing thermal throttling.

Due to the nature of overheating issues, there are plenty of potential causes for thermal throttling. For an in-depth guide to fixing it on your CPU, check out our guide to fixing CPU temperatures. To quickly cover some common causes, however:

Higher thermals in one component will likely raise the temperature of your whole computer over time, so it is best to fix throttling issues early on. This is especially true for expensive components like the CPU and GPU because high thermals can reduce their lifespan.

Modern gaming requires access to a significant amount of RAM. Due to how operating systems store information and run background processes, you want to have at least 1GB of RAM left available even while your game is running. If less is available, Windows may run into issues and begin writing directly to your hard drives. This can cause significant hiccups and even lead to game crashes.

While you are cleaning out your computer from the last step, it is worth taking the extra minute to re-seat your RAM and ensure it works properly. If you have multiple sticks of RAM, try running with just one to ensure that neither is broken. Refer to your motherboard’s manual to make sure you have the RAM in the correct slot as well.

Window’s Resource Monitor tab can track total memory use. Keeping it open while you game and checking to see how much you use is a good idea; if the number gets too close to maximum, it may be time for an upgrade.

How Disk Drives Can Also Cause Hiccups

The speed, age, fullness, and fragmentation of your hard drive can also influence game speed and cause sudden FPS drops. This is true of any drive, whether it is an SSD, HDD, M.2 drive, or any other form of data storage. As games write data, it inevitably causes a small hitch in gameplay. Most of the time, this is unnoticeable, as it is done in small amounts and handled quickly.

However, if a drive is facing issues, these common, small hiccups get out of hand. This is common on older, slower drives, as they cannot write data as quickly as new ones. Doubly so for drives that have seen significant use thanks to fragmentation.

Even some newer drives like SSDs run into these issues, most frequently due to space requirements. SSDs automatically reallocate files to free up some space; if this happens consistently while gaming, it may cause FPS drops.

To test the health of your drive, you can use Window’s Resource Monitor and track disk usage and response time. The higher these numbers are, the more likely it that you are running into issues with the drive. You can attempt to defragment the drive using Window’s built-in utility, or free up space.

Sudden FPS drops can be caused by all sorts of things. For your first, early steps, it is best to identify whether the problem stems from a hardware issue or a software issue. While it could be both, problems developing suddenly often only have one cause. Most occurrences are usually caused by thermal throttling, outdated or recently updated drivers, or failing hardware.

Third-party tools or in-game settings can help you identify when the FPS drops happen and what happens to your system at the same time. Keep an open mind and approach problem solving by focusing on the easy to fix problems first.