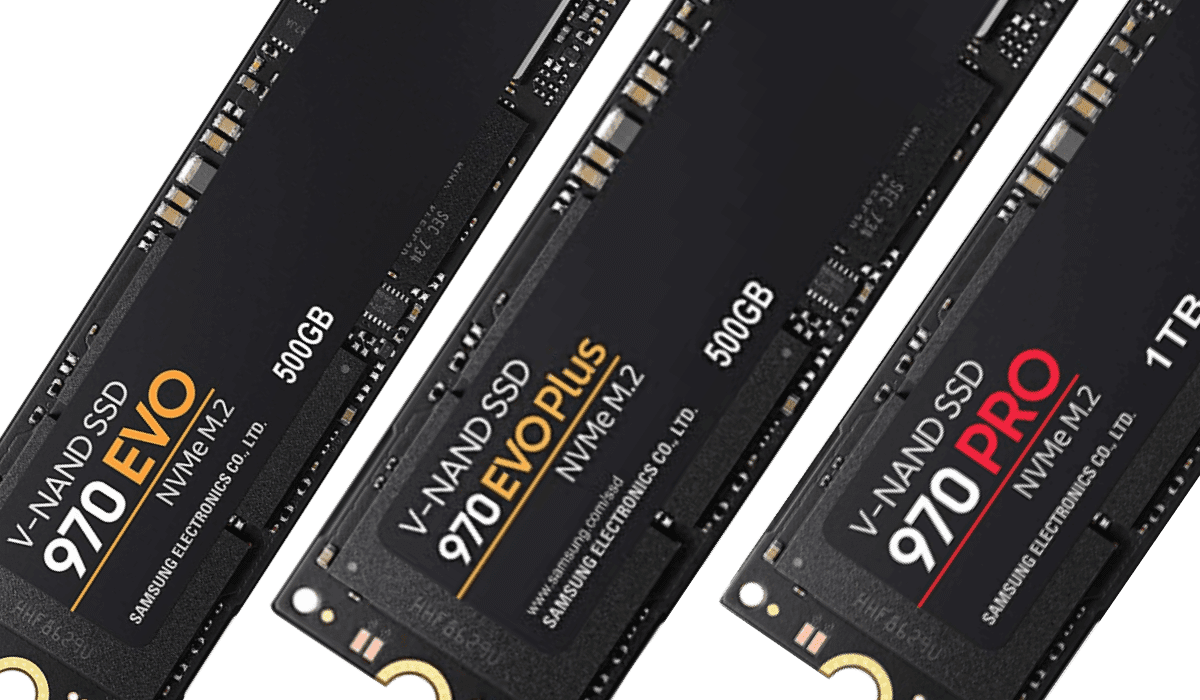 If you’re looking to buy a M.2 NVMe SSD in order to sufficiently run demanding applications, or move large masses of files, all while keeping your PC case uncluttered, then Samsung is a time tested, reliable, company to shop from.

Samsung has a wide range of SSDs, and in regards to M.2s in particular, things can get pretty confusing with their models. The specs that companies put out for sequential read and write speeds are known to be unreliable, so distinguishing between which model is better and which is worse can be tricky. The fact that there is no regulating body to ensure that proper SSD speeds and overall specifications are properly displayed, only exacerbates any problems associated with market research for purchasing the right SSD for your needs.

In this article, we will be analyzing three different 1 TB SSDs put out by Samsung, and with the use of average user benchmarks, we will compare the company-listed specifications, the actual tested specifications, and the price-value relationship for each of the three listed models.

The three models that are to be compared are the:

But before we get into the comparisons of each of these devices matched up against each other, lets take a look at what these SSDs have in common.

Firstly, all three of these storage devices use V-NAND technology, which is a non-volatile flash memory that utilizes layers of vertically stacked cells; resulting in minimized space, faster read-and-write speeds, and even lower production costs.

Next, two of the three models have the same level of endurance, measured in TBW – Terabytes Written. This spec measures how many Terabytes you can cumulatively write into the SSD over its lifetime, and the EVO and EVO Plus 1TB drives measured at 600 TBW. The 970 Pro on the other hand, comes with a guaranteed 1,200 TBW. To put that in perspective, in an eight-year period, you would have to write 410 GB/day to reach the 1,200 TBW limit, or 200 GB/day for the 600 TBW limit. Also, all three SSDs do come with a 5-year warranty, so you will be covered for the years to come.

Of course, all three SSDs have the same 2280 form factor, including PCIe Gen 3.0 x4 (vs PCIe 4.0 NVMe SSDs) and NVMe 1.3, but in addition these drives also have Samsung’s Dynamic Thermal Guard for keeping consistent temperatures throughout, as well as Samsung’s “Magician” software which lets you keep track of your SSD’s speed and performance.

All that said, let’s look at how each of the three of these drives compares to one another in terms of advertised performance versus actual performance, and of course, the price versus value of these performance SSDs from Samsung.

To begin, we will evaluate the upgrade between the EVO, and the newer EVO Plus. In regards to the advertised read and write speeds, according to Samsung’s official site, we have: 3,400 MB/s, and 3,500 MB/s read speeds for the EVO and EVO Plus respectively, and 2,700 MB/s versus 3,300 MB/s write speeds.

According to the benchmarks, the differences are not that stark.

As is evident in the chart, the differences in sequential read and write speeds are minimal, despite the boasts by Samsung of the EVO Plus being “up to 53% faster than the 970 EVO.”

The main difference appears to be in the average sustained write speeds – which measures the sequential write speeds of large files on a 60 second continuous interval.

For a price difference of $30, is the EVO Plus worth it? It really depends on your needs. For the average user, not so much.

In regards to the official stats released for the Samsung 970 EVO Pro, we see a 3,500 MB/s peak reading speed, and a 2,700 MB/s peak writing speed. So, let’s see if the 970 EVO Pro is worth the price difference in comparison to the EVO or EVO Plus:

As is apparent above, if you compare the average, day-to-day, speeds that you are going to be working with, the answer is: not really. What we see is a 23% higher average sustained writing speed that the EVO Pro has in comparison to the EVO Plus, but other than that it basically lacks everywhere else.

Overall, one can argue that the EVO Plus is actually the superior SSD, even specification wise, in comparison to the EVO Pro.

Despite its higher price point, the Samsung 970 Pro does not seem to back it up with the appropriate higher-end benchmarks.

Depending on your usage, each card has their value, so if you’re in the market for a NVMe M.2 SSD, be sure to check each one of them out.