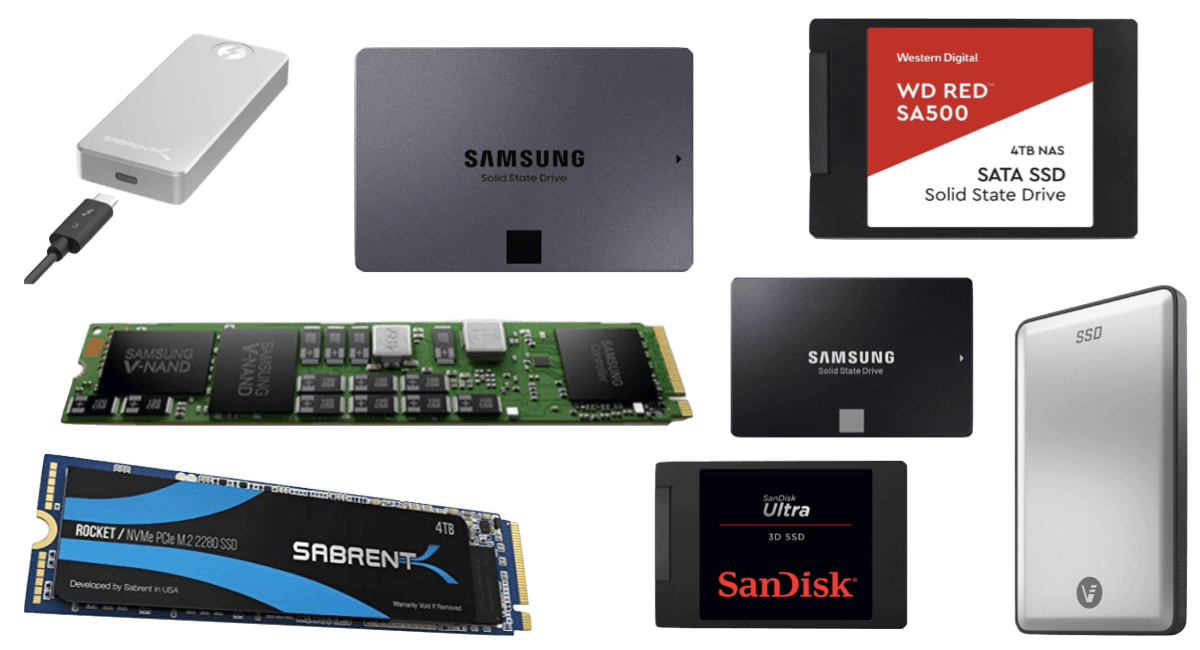 The advances in recorded audio and visual quality, with 4K and 8K resolutions becoming the new standard, together with the ever-growing graphical advances of the new generation of gaming, have made ultra-fast, high-storage units an absolute necessity for professionals and gamers alike. Though the options are limited, currently the highest SSD storage units you can get a hold of are four terabytes; and that includes M.2 NVMe SSDs, 2.5 inch SATA SSDs, and external SSDs – with either Thunderbolt or USB-C connectors. In this article you will get a run-down and comparison of the current best available options for your needs.

With most mid-to-high end mother boards, two M.2 NVMe slots are all you can get, so you are quite limited. Non-volatile memory accessing of the PCIe bus makes M.2 SSDs reach ultra-fast speeds of gigabytes per second, in both reading and writing speeds. Quite a leap to the approximately 520-560 MB/s speeds of 2.5’’ SSDs, making these 2 M.2 slots on your motherboard extremely valuable. That being said, you will want to get the most amount of space from there slots as you can, and in the 4TB range there currently are only two options of (approximately) M.2 NVMe SSDs to choose from:

The Sabrent 4TB Rocket NVMe PCIe M. 2 2280 is a high-performance M.2 SSD drive based on 3D NAND flash memory, and utilities a PCIe 3.1 x4 interface. It can reach extremely high speeds of 3.45GB/s (read) and 3GB/s (write) – with 580,000 iOPS 4KB random read, and 650,000 iOPS 4KB random write speeds. To complement its performance is its high value, as it has a MTBF (mean team between failures) of 1.8 million hours of operation. The Sabrent 4TB Rocket can currently be found for $849 and includes a 5-year warranty.

The Sumsung PM983 Series SSD utilizes a PCI Express 3.0 x4 interface, but does not include NAND flash memory, and has slightly less memory of 3.84 TB in comparison to the 4TB of the Sabrent Rocket. It reaches speeds of 3GB/s for sequential reads, and 1.4GB/s for sequential writes, with 480K iOPS of random read speed and 42K iOPS of random write speed.  What makes it a bit more enticing, is the fact that it has an increased MTBF of 2 years, and it comes at the lower price $729, together with a 5-year warranty.

As most mid-to-high end motherboards will have upwards of 6 SATA slots, if you run out of M.2 slots, you can always rely on 2.5’’ SATA SSDs. Though up until recently Samsung was the only provider of such high capacity SSDs, currently Sandisk and Western Digital have both entered the competition.

At the lower price range of 449-459$ we have Samsung’s 860 QVO 4TB SSD, and the Sandisk  ULTRA 3D 4TB SSD, both utilizing NAND technology. In comparing speed, we have:

The speed differences are quite small, but there is quite a difference in regards to their TBW values. Terabytes Written (TBW) directly measures how much you can write cumulatively into the drive over its lifetime, and though the Samsung 860 QVO comes with 1440 TBW, Sandisk’s comes with only 600 TBW. Though most uses will hardly come close to 600 TBW, many may find this as an overall turnoff to the otherwise great 2.5” SSD Sandisk has to offer. On the other hand, note that the Samsung QVO comes with a 3-year warranty, whereas the Sandisk ULTRA comes with a 5-year warranty.

In the slightly higher $579-599 price range, we have Samsung’s 860 EVO 4TB SSD, and Western Digital’s Red SA500 4TB SSD. Again, both utilize 3D NAND technology, with speeds and prices of:

Again the price and speed differences are quite small, but this time Western Digitial comes to trump the impressive 2,400 TBW of Samsung’s EVO, with its own 2,500 TBW, and an impressive 2 million hour MTBF. Both units come with a 5-year warranty.

Finally, we have the 4TB external SSD options, in case you’ve either run out of SSD slots, want to keep your storage separate and secure, or want to collaborate on projects with your colleagues.

The one and only true Thunderbolt 3 utilizing option, is the Sabrent Rocket XTRM 4TB.

This remarkable external SSD utilizes NVMe paired with a Thunderbolt 3 connector to deliver speeds of up to 2400 MB/s (read), and 1800+ MB/s (write), for sequential transfers. As of the writing of this article it is the only external SSD of its kind, and does come at quite a steep price range of approximately $962 (with only a 2-year warranty). Still, with its high-capacity and ultra-high speeds, it’s a great buy for anyone looking to fully utilize their external SSD drive.

If you don’t have a Thunderbolt 3 connector, or don’t want to spend over 900 dollars for an external drive, worry not, as there is another option – the VectoTech Rapid 4TB External SSD:

With read and write speeds SATA 6 Gbps speeds that reach 540mb/sec, this respectable alternative to the Sabrent Rocket XTRM comes at a price range of $599 and includes a 3-year warranty.