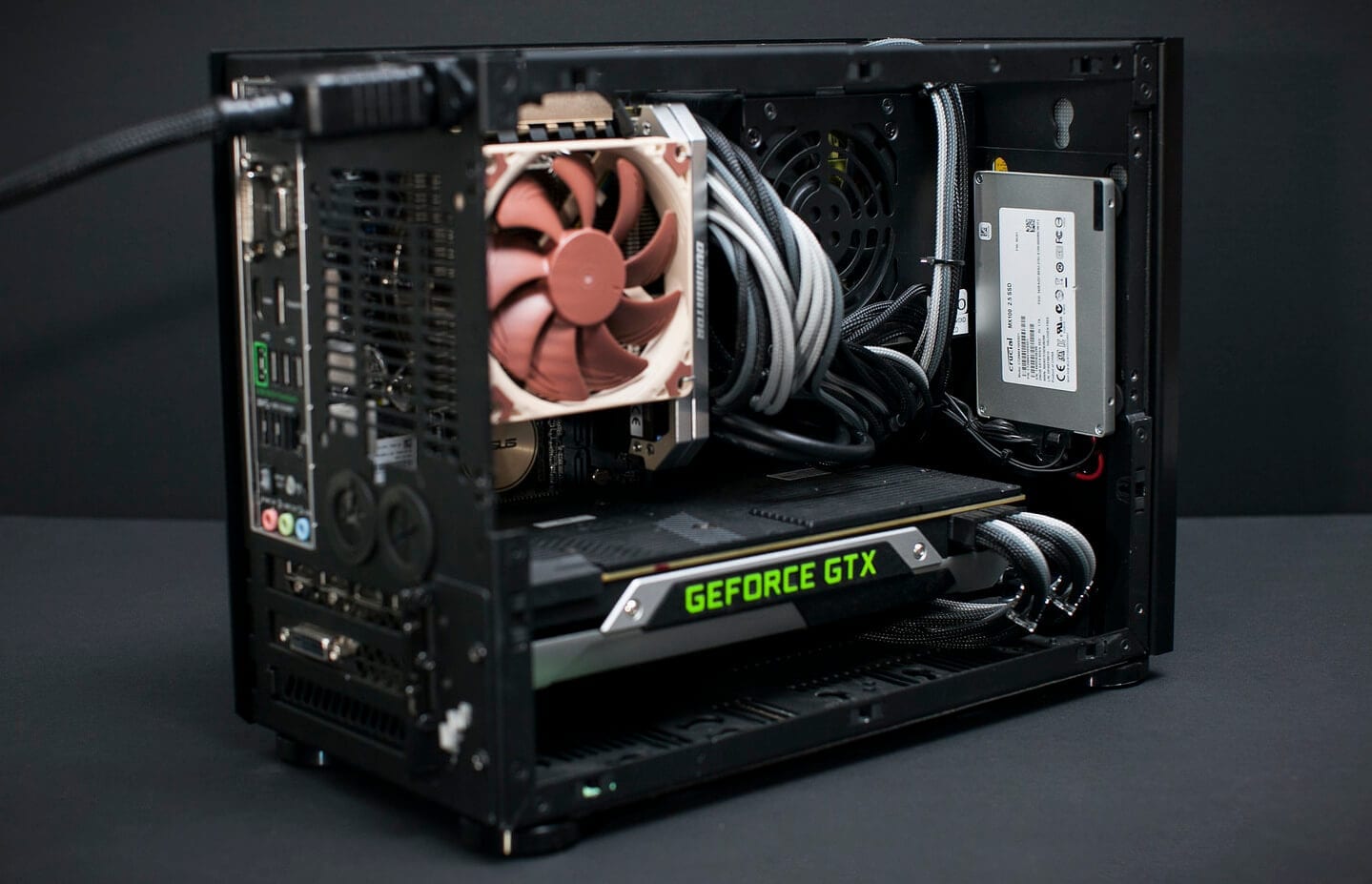 The NCASE M1 is one of the most popular case options for those looking to enter the world of small form factor (SFF) builds. Used by hundreds, if not thousands of SFF builders, there has been much trial and error by the community on which components fit, don’t fit; work and don’t work effectively with this case – such as CPU coolers, case fans and power supplies.

Choosing the right cooling components for the NCASE M1 is imperative for getting the most out of your graphics card and CPU, as the right CPU cooler, case fans and ultimately case thermals and airflow will dictate what your temperatures are and how far you can push your SFF system.

In this series of guides we will recommend the best components for various popular SFF cases, with this particular article focusing on the popular NCASE M1 mini ITX case.

Before we begin on which components to pick, we want to show the optimum cooling setup for the NCASE M1. We recommend using a total of 3 case fans, 2 will be used for the graphics card intake whilst the third being used on the front side bracket also as an intake.

This is by far the simplest yet most effective cooling configuration for the NCASE M1, and we don’t recommend adding an additional 92mm exhaust fan since airflow is already moving towards the rear of the chassis from the CPU cooler.

The NCASE M1 has an official max CPU cooler height restriction of 130mm, and within this height, the most recommended cooler (on forums and Reddit) is the Noctua NH-U9S – a low profile cooler that offers the best overall performance and compatibility for popular Intel and AMD sockets.

This is a super quiet cooler with a small 95x95mm footprint, allowing for total RAM clearance on most motherboards of all sockets. The height is 125mm, just below the NCASE M1’s recommended CPU cooler height of 130mm – so there should be no worries about the NH-U9S not fitting.

This CPU cooler has won countless awards from the likes of TweakTown, Modders INC and Eteknix, and all with good reason. This is the absolute best CPU cooler for the NCASE M1, hands down.

Alternative coolers we would also recommend if the NH-U9S isn’t for your liking is the Cyrorig M9 that offers great value for its performance, as well as the Noctua NH-C14S – but you will have to consider opting for low profile RAM is you go with this cooler due to limited RAM clearance.

The NCase M1 supports PSUs of up to SFX and SFX-L form factors, so ATX power supplies unfortunately won’t fit in this small form factor chassis. Therefore, looking at SFX power supplies that are extremely reliable, best in class and are gold or platinum rated, we recommend no other than the Corsair SF600 PSU. This PSU has fantastic electrical performance and regarded (alongside the SF450) to be the quietest PSUs for the NCase M1.

If price of the SF600 is an issue for your next NCase M1 build, or perhaps you simply don’t need that much wattage, then we also recommend the equally great Corsair SF450.

In terms of fan orientation of the SF600/SF450 power supplies for the NCase M1, we recommend for the fans to be facing out, since fans facing inwards would simply be pulling in hot air, rather than facing outwards would pull in fresh air for the power supply.

For the NCase M1 you will want to go for the setup we mentioned early, 2 fans used for the intake and 1 case fan on the side back towards the front to be used as the third intake fan.

There are a number of decent case fans we recommend, and if budget (and design) is not of an issue for you, and looking for absolute best cooling, performance, then we recommend the Noctua NF-A12x25 for the NCase M1. This is Noctua’s next-generation design that offers super quiet operation and best-in-class performance. This does come at a price, though, with the NF-A12x25 being one of the most expensive 120mm case fans on the market – but if budget is not an issue for you – then this is the case fan to get for the NCase M1.

Of course this distinctive design isn’t to everyones liking (we actually like the design), and if this applies to you, then other worthy case fans for the NCase M1 we would recommend include the Corsair ML120 – a great value 120mm case fan that provides a high RPM range (although some curve adjustment will be required) and impressive cooling performance in the three fan orientation described earlier.