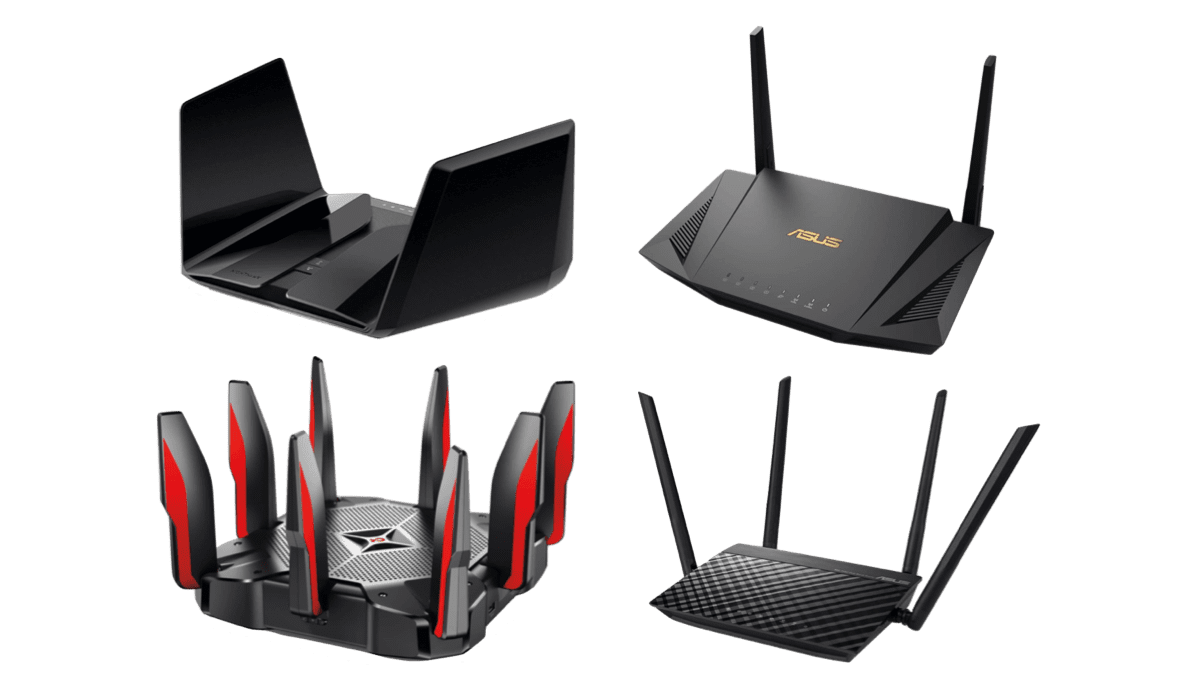 You can build a beast of a PC, with the latest 10th gen Intel or Ryzen XT CPU and a GeForce Ampere RTX 30 series GPU, but if you don’t have a good connection to the internet it will all go to waste when it comes to online gaming. Of course, online multiplayers of any kind do not typically need high-level PC hardware components, as the games are made to be less hardware intensive in an effort to attract as many players as possible. Instead of aiming to purchase the best PC hardware available, gamers that focus on online multiplayers will usually prefer to spend that money on high-end peripherals, such as mechanical keyboards, gaming mice, game-specific controllers like arcade sticks for fighting games, and, of course, gaming routers.

Now, online multiplayer games can be classified into two categories: latency dependent player-versus-player (PvP) games, and non-latency dependent PvP or player versus environment (PvE) games. The former would include genres like competitive first-person shooters, such as Counter Strike: GO, and, especially so, fighting games. The non-latency dependent category includes massive multiplayer online games (MMO), such as World of Warcraft, massive online battle arenas (MOBA), such as DotA or League of Legends, and other casually competitive games, like the recently released, and ever-so popular, Fall Guys. For latency dependent games, a wired ethernet connection to the internet is absolutely necessary. Fighting games, for example, even have UI indicators that show you if your opponent is using Wi-Fi so that you can avoid the match – that is how much Wi-Fi users are shunned upon in that genre. This is due to the fact, that fighting games are extremely timing precise, so a less than optimal connection really hinders the experience for both players. For FPS games Wi-Fi is acceptable, just not optimal. For all other games, a Wi-Fi connection can work just fine if the signal is good.

Whether you use a Wi-Fi or a cabled connection, gaming routers are made to help you get most of the internet connection you are already paying for. Especially for Wi-Fi connectivity, these routers make sure that the signal is amplified enough through any area in your home which houses the device you are using to connect to the internet. Gaming routers are also great for when you have multiple people accessing internet from the same connection, as these routers can send the appropriate amount of signal to each device without interrupting your gaming. In addition, they also have several safety features that can be useful, such as parental controls, guest Wi-Fi access, firewalls, and VPN server creation. Network management is also a key element for gaming, as you can see which device or application is hogging up your internet connection, potentially causing latency issues. Some routers will even allow you to place gaming applications into designated express lanes which bypass network congestion, so you never have to worry about stuttering or lag spikes.

To help you find the proper router for your needs, we’ve compiled a list of the best gaming routers available for those looking to game on a budget, at an entry-level, a mid-range option for gaming enthusiasts, all the way to a high-end gaming router for professional esports players or even teams.

Best Routers for Gaming – Our Recommendations

Whether or not the games you prefer rely heavily on an internet connection, or whether you are just looking to find a router on a budget, the ASUS RT-AC1200 V2 is a respectable option that offers high-speed wireless performance without costing you a pretty penny.

This router uses four external antennas, two of which are utilized for a 2.4 GHz (300 Mbps) band, while the other two are utilized for a 5 GHz (867 Mbps) band. Therefore, the RT-AC1200 V2 has dual-band compatibility, for a combined total speed of up to 1,167 Mbps. Additionally, the RT-AC1200 V2 is capable of Dual WAN connectivity, so you can have two separate connections via the same, or different, ISPs, managed through this single router. It also has QoS standards, that allow you to choose bandwidth prioritization for different applications, whether it be video streaming, downloading, or gaming. These applications can also be monitored via the ASUS-WRT UI, from which you can also setup and control network apps for multiple devices. ASUS-WRT can even be accessed via a mobile application (the ASUS Router App) which can also be used to diagnose connection issues, update the router’s firmware, or access advanced parental control features. Note that this router is Wi-Fi 5 compatible, using the 802.11ac chipset and 256QAM Wi-Fi acceleration, so it is not Wi-Fi 6 compatible – though it still offers more than enough speed for the majority of internet connection plans. What is best about the RT-AC1200 V2 is its price, as you can enjoy high-quality internet, wired or Wi-Fi, for only $49. It may not be the most advanced router, or have the word “gaming” in its name, but for under 50 bucks, it’s hard to find an option that can match the capabilities and features of this ASUS model.

If you are looking for an entry-level router, but still want it to have compatibility for the new generation of Wi-Fi and its new 802.11ax standard, then ASUS has an excellent option that offers both next-gen Wi-Fi compatibility, together with a host of features, so you can maximize your internet connectivity.

The ASUS RT-AX56U supports an 80 MHz bandwidth and 1024-QAM with a total networking speed of 1,800 Mbps, outdoing the previously mentioned RT-AC1200 V2 by over 600 Mbps. It is able to achieve these speeds while utilizing a combination of the OFDMA (orthogonal frequency-division multiple access) digital modulation scheme and a multi-user multiple input multiple output (MU-MIMO) technology for four times greater the network capacity and efficiency, even in environments where multiple devices are connected and in use. This is accomplished through the task of dividing each network channel into multiple sub-channels which bundle signals from multiple devices so that they can be transmitted simultaneously; resulting in less latency and a more responsive connection. Also, because of the reduced bandwidth of these sub-channels, they are able to travel further than the conventional 802.11ac channels by up to 80%, so the coverage increases as well.

Additional useful features included with the RT-AX56U are: ASUS and Trend Micro’s AiProtection Pro, which automatically protects your devices by regularly updating security signatures, while also providing advanced parental controls which can block specific websites or mobile app types. Target Wake Time and ASUS AiMesh are also included, the former being a feature which schedules designated intervals for data transmission, so that devices that are “sleeping” do not waste battery seeking router signal, while the latter allows for connectivity between multiple ASUS routers with a central control for larger living spaces. Finally, the router is equipped with two USB port: one being a USB 3.1 port, the other a USB 2.0 port. You can currently find this excellent WiFi 6 compatible entry-level option for just $129.

Competitive gaming, whether it be actual tournament competition or just scrims with friends, means that internet spiking or stuttering must be eliminated. You simply cannot have other devices, apps, or background programs suddenly hogging your internet connection, causing you lag-spikes and an annoying stuttering or delay. Whether you are using a wired connection, or Wi-Fi, the TP-Link AC5400 is a must for competitive gamers and enthusiasts alike.

This oddly shaped, spiderlike, router offers tri-band frequencies: one at 2.4 GHz, and two at 5 GHz (1,000 and 2,167 Mbps respectively), so you can allocate one band for gaming traffic and have the other two bands for all other home devices. If you don’t want to get into the trouble of doing so, the router also has a Smart Connect feature which will detect and deliver the proper Wi-Fi band to each device respectively. The use of intelligent traffic prioritization, MU-MIMO, and Airtime Fairness are all utilized in order to optimize throughput and, in turn, lessen the latency burden on your gaming applications. In order to achieve this, the AC5400 uses a 1.8 GHz, 64-bit, quad-core CPU, with three co-processors and 1 GB of RAM, all working to balance the Wi-Fi demand and deliver services to applications related to the allocation of network demand. When it comes to wired connectivity, the router uses two router speeds (1 Gbps and 2 Gbps) for its total of eight Ethernet ports; so you can connect the router to both a PC, a console, as well as combine the WAN port with a LAN port to connect a modem with DOCSIS 3.1 compatibility.

Added features include TP-Link (and Trend MicroTM) HomeCareTM antivirus, QoS and parental control software, as well as a built-in VPN server; incredibly useful for when you have to connect to a public Wi-Fi server. VPN Acceleration is also used to speed up OpenVPN connections to your home router, so that the connection doesn’t drag. Two USB 3.0 ports are also available on this router. The current price of the TP-Link AC5400 sits at $229; not cheap, but definitely worth the cost for the overall utility it provides.

For those that don’t mind spending the extra money to have an all-encompassing device with over 2,500 square-foot coverage, the NETGEAR Nighthawk RAX200 is a beast of a router that is Wi-Fi 6 ready, capable of 12 simultaneous Wi-Fi streams, and tri-band wireless speeds of up to 10.8 Gbps.

The RAX200 can support internet plans of up to 2 Gbps – though to do so you would have to use one of the only five Ethernet LAN ports together with the WLAN socket. Still, a nice option to have, though not very many ISPs are offering 2 Gbps internet connections. The RAX200 makes use of three bands (one 1.2 Gbps and two 4.8 Gbps) so no matter which band you appropriate to gaming it will more than suffice. Four of the five LAN ports support 1 Gigabit Ethernet, while the other is a 2.5 Gigabit ethernet port – and you can aggregate two 1 Gigabit Ethernet LAN ports in order to achieve faster file transfers as well. In terms of its processing power, the NETGEAR Nighthawk RAX200 has a 1.8 GHz quad-core processor, capable of OFDMA, MU-MIMO, Dynamic QoS, 1024-QAM, Beamforming technology (directional signal transmission toward specific receiving devices), WPA2 and WPA3 wireless security protocols, DoS protection, and firewall/VPN support.

In terms of additional features, the NETGEAR Nighthawk RAX200 includes Amazon Alexa voice support, guest Wi-Fi access, Smart Connect (which automatically redirects devices to the most appropriate network band) and personal cloud storage. In fact, you can plug in a USB storage device into one of its two USB 3.0 ports and have the RAX200 transfer files among devices like a server, or you can choose to simply keep them in a personal cloud which you can access from anywhere. Where the Nighthawk RAX200 falls short is its anti-virus and parental control software. Despite its price, in order to use NETGEAR Armor (a data and network protection software powered by BitDefender) you have to pay $69.99 a year – only receiving one free month trial with the purchase of the router. Same goes with the parental controls, which will cost $4.99/month if you want to continue to be able to use them after the first month. For professional gamers, e-sport team managers, or those who simply want to game without being affected by the internet usage of family members, you can purchase the NETGEAR Nighthawk RAX200 for $789 – a steep price, yet a definite must-have for professional-level users.