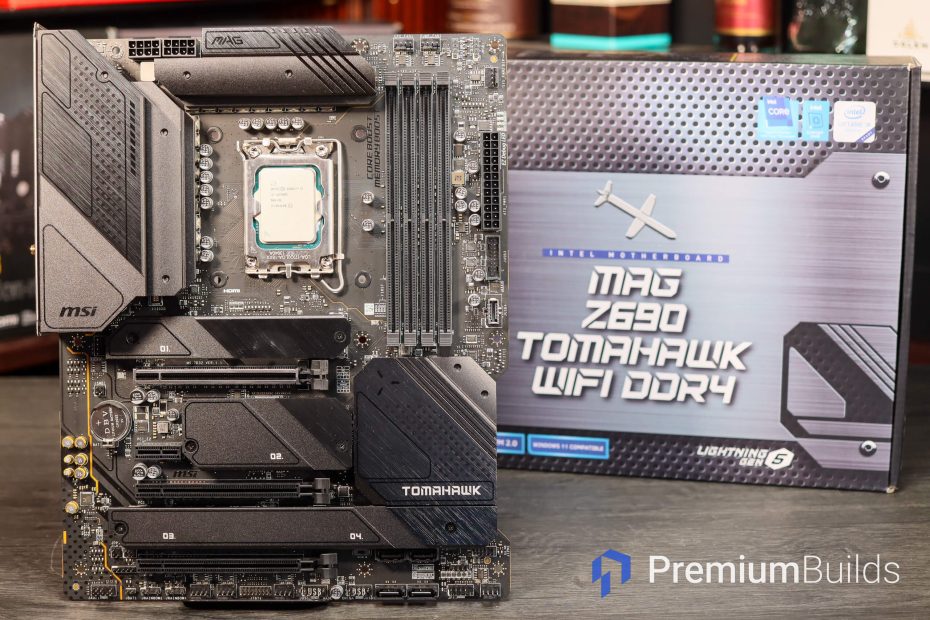 The MSI Tomahawk brand gained a huge reputation with its B450 AMD offering, at the time a good value motherboard that supported high-end Ryzen CPUs at a lower cost. Each iteration since has grown in both price and features, and today we have the Z690 Tomahawk DDR4 Wifi. This board makes the most of the Z690 platforms innate strengths with a wide range of connectivity, storage options and expansion slots, as well as a good foundation specification. But it’s $300 and that’s a lot of anyone’s money.

We’ve used this board throughout our evaluation of the Intel i7-12700K, giving us insight into the performance and features of this motherboard, so let’s discover whether it’s the right board for your Intel 12th generation PC build.

The MSI Tomahawk sits right in the middle of the Z690 specification. Overall this is a ‘high end’ chipset, and most boards have four M.2 slots at PCIe 4.0, six SATA ports, plenty of USB connectivity, and strong Voltage delivery circuitry.

The MSI Tomahawk is unremarkable in this regard, including all the features you’d expect to find.

There is a pleasing lack of conflicts, all M.2 Slots and SATA slots can be utilised at the same time. Whilst the additional PCIe slots do not boast the fastest specification, they also do not conflict with any other ports or slots. Whilst this Motherboard is not suited to multiple GPU setups (Except in rendering or non-bandwidth intensive applications where the PCIe 3.0 X4 slot is no hindrance to performance), for all common usage including gaming, production and general workloads it’s well configured and well-appointed.

The features notably missing really relate to more focussed overclocking usage: There’s a Flash BIOS button, but no Clear CMOS, power or reset buttons. A simple array of LEDs indicate boot problems (which we did not encounter at any stage) rather than a more informative segmented display. As for looks, there’s no RGB at all on this motherboard, although there is a handy switch to enable or disable attached RGB devices. Really these are features you wouldn’t expect to find on a mainstream board but at $300 we are looking for places MSI could have offered more value.

Our other slight criticism is the lack of USB ports at the rear and the fact that only a handful of them are high speed. Ideally on a board at this price point, we’d like to have seen a couple more USB A ports there.

The Tomahawk is pretty well laid out, maximising your ability to fit a wide range of additional cards and storage options into it.

The second main PCIe slot is 3 slots below the primary GPU slot, meaning it’s still accessible even with one of the larger latest GPUs fitted. The PCIe X1 slot does get obscured by any GPU larger than pure 2 slots though. And that lowest PCIe Slot is handily placed for an audio or network interface card, but be aware it is just at PCIe 3.0 X1 bandwidth, so it’s not suitable for high bitrate capture cards, for example.
Our one misgiving is the slightly awkward SATA port placement, four of them are at 90 degrees to the board and down in the lower corner. Whilst it’s not a deal-breaker, it’s not the tidiest of solutions. We prefer to see them flat along the edge of the board.

Everything else is conventionally and conveniently laid out with no major oversights or issues.

MSI use the ‘Click BIOS 5’ which is a relatively intuitive segmented BIOS with both ‘easy’ and ‘advanced’ modes. There’s not much to say here apart from that the BIOS is functional, practical, and depending on your affinity and familiarity, you’ll be able to do what needs to be done here without too much searching around. That said, the Alder lake CPU is complex, and there are a lot of options listed out and not all of them are intuitively titled. MSI claim a useful ‘legacy gaming mode’ which allows disabling of E-cores by using Scroll Lock. This can help in running some titles when anti-cheat or DRM software sees the unequal cores of Alderlake as two separate systems and refuse to run. However, we were unable to get this feature working within Windows 10.

We also noted that after setting XMP the board likes to boot cycle once, before coming back up for a second boot with the settings and presumably memory training applied. This could be disconcerting for new builders but did not interfere with applying an XMP profile. Fan control is well laid out and easy to tweak. Memory overclocking is straight forwards and assisted by a number of saveable presets. Whilst these can be backed up to USB, sadly they get wiped in a CMOS Reset, which is a common occurrence during Memory overclocking. At least once you’ve settled on a set-up, it can be saved and applied as you please.

Overall, amongst BIOSes, MSI is still the one we get on best with, but we acknowledge that this is likely down to familiarity with the layout and settings on offer.

No BIOS update or tweaking of TPM, GTP, Boot modes or anything else was required to build this PC and in install and boot windows. Note that BIOS updates in future are likely to disable the ability to enable AVX512 following Intel’s mandate that this ‘quirk’ be erased in future BIOSes.

Performance was tested as stock, without enhancement or ‘game boost’ mode applied. This board adheres to Intels Power limit specification of 190W PL1 for long term power limits, and the CPU performs accordingly. That is to say it’s bang on the performance of this CPU in any other board, including the more expensive MSI Z690 Carbon. Power limits can be removed entirely although the CPU itself will limit power draw.

CPU overclocking was intuitive, and relatively successful, with a 5.0GHz all P- core clock easily applied along with a 50mV undervolt. This raised CineBench performance about 1,000 points to 23,000 and there was no detriment to stability.

We spent considerably more time exploring memory overclocking and found this board a flexible and stable platform to tune our Samsung B-die test kit. 4000MHZ CL16-16-16-36 was easily obtainable in Gear 1, without adjusting Memory or IMC voltages. The features and flexibility of this motherboard, and Alderlake, impressed us and with fast RAM being a big performance modifier it’s nice to be able to optimise with ease.

Overall, we had absolutely no concerns over the performance of this motherboard. It’s an excellent pairing with an i7-12700K, it has the power headroom to run an i9-12900K, and there’s plenty of latitude for some overclocking too.

This motherboard is available in both DDR4 and DDR5 formats. It retails at $300 in the US, Around 300€ in Europe, and a more attractive £249 in the UK at present. The DDR5 version ruins any sense of value by requiring RAM kits that currently retail for at least the same amount again, and confer no real performance advantage vs the DDR4 version with well-specified and readily available RAM.

We feel that this board marks a watershed price point for Z690. With the high performing and versatile i7-12700K costing $400, moving towards that price point for a motherboard does not feel like a sensible allocation of budget. From $200 upwards boards like the MSI Pro Z690-A, and Gigabyte UD or Gaming X provide a rock-solid platform for an i5 or i7 K series CPU.

As we approach $400, not only do boards add a few features besides Thunderbolt connectivity that seems worthy of the price, they also require DDR5 RAM. By that point, we’re looking at a $400 or more premium for very little return in performance or functionality.

Therefore, given the feature set of the MSI Tomahawk, we feel that $300 marks the absolute threshold price for this motherboard. If it’s more expensive, look at better value alternatives. If it’s closer to $250 in bundles, deals or sales, then it represents good value.

In terms of MSI’s own products, the notable competitors are the MSI Z690-A Pro which sacrifices the Audio codec to an ALC 897, has a slightly weaker but still capable 14 phase VRM design, and makes do with fewer high-speed USB ports, but otherwise offers the same performance and feature set at around $80 less. The MSI Gaming Edge WiFi is $20 or so more and has a slightly more jazzy aesthetic, along with some onboard RGB and two of the rear panel USB ports are upgraded to the faster 10gbs spec. Otherwise, again, it’s identical.

The ASUS TUF Z690 Gaming offers a slightly reduced specification, with key features on par with the MSI Z690-A PRO. There’s a 14 phase VRM, Four M.2 Slots, Just 4 SATA slots, and an array of PCIe Slots consisting of two full length, two single length, and one X4 length slot. It’s got just 6 rear USB A ports and one USB C, and decently specified Realtek Audio. It’s a little light on fan headers for a board in this price range, with just 3 Chassis fans in addition to the CPU and pump fan headers. It’s a decent board and offers everything you need, but we feel the price point is more $250 than the $300 current asking price. The Gigabyte Aorus Elite is better specified and lower-priced, and the Tomahawk is better specified at the same money.

Gigabyte Z690 Aorus Elite AX DDR4 –This board is MSRP at $269 and offers a very well rounded specification. The VRM is on a par with the MSI Tomahawk, And it boards 2 more USB 2.0 Ports at the rear. It has an ALC 1220 Codec and a cut down 3 port rear audio output configuration. There’s some subtle RGB. Whilst early boards had some issues caused by the pre-release BIOS, these have now been rectified with the ‘F6’ BIOS update, and there’s a BIOS Q-flash function to allow easy updates. At a $30 saving over the Tomahawk, it’s a compelling motherboard for a PC built around the i7-12700K CPU.

Overall then, there’s a lot to like about the MSI Z690 Tomahawk. It gets most things right, is a great pairing with the i7-12700K, and makes full use of the most attractive features of the Z690 chipset. The question really comes about value, and whether you’re better off with a cheaper board with near-identical features and specifications like the Gigabyte Z690 Aorus Elite DDR4, Or perhaps even the Gaming X or MSI’s own Z690-A. Those are the boards we’d choose to pair with the i5-12600K in order to get maximum value. The Tomahawk meanwhile makes the most sense with an i7-12700 or as a cost-effective platform for an i9-12900K.