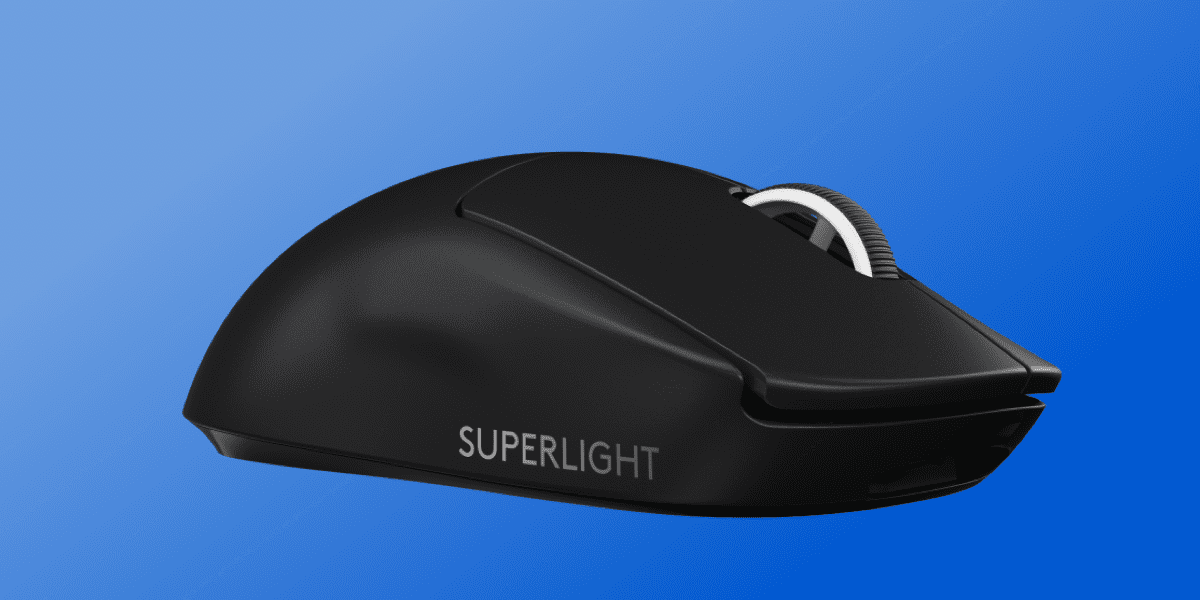 Hey everyone! DogLogic here with my first review for PremiumBuilds. I’m a competitive FPS player of 14 years with a passion for being overly-opinionated about gaming mice. Be sure to follow us on the blog or YouTube to be notified of future reviews!

Ah, the G Pro Wireless. The original was a historic entry into the world of gaming mice: a disruptive surprise in the world of mice whose wake can still be felt today.

By launching a high-performance wireless mouse in an industry that was still scoffing at the technology, and then proceeding to sponsor athletes to win tournaments with it, Logitech solidified their foothold and garnered a mass-market appeal that has gone unshaken.

However, in the interim two years, a rift has grown. Heavy-hitters like the Razer Viper Ultimate challenged Logitech’s wireless technology, with other companies launching lighter mice with specialized shapes. Logitech seemly refused to keep up, appearing content to ride their presence in the pro scene as the only real form of ongoing consumer encouragement they needed.

That is, until now. It turns out Logitech was biding their time. Unwilling to drill holes in their mice, they were secretly engineering a marvel: a solid-body wireless gaming mouse under 63 grams. But is it enough to make up for 2 years of lost progress? Let’s see.

Let’s get the obvious out of the way. The Superlight uses the Hero 25K Sensor that we already know is amazing. In the 100+ hours I’ve used the Superlight, not once did I experience a stutter, delay, or spinout. The differences are truly imperceptible when compared to a wired option, and it’s only getting better with time.

If you’re traumatized from the early days of wireless technology, it’s time to embrace it. Let’s move on.

Logitech’s advertised weight for the Superlight is “less than 63 grams”. To actually hit that weight would require using the PowerPlay puck, which is frankly not something you are going to be using if you care about performance. Without it, the mouse actually weight as little as 57 grams.

Achieving this weight on a solid-body wireless mouse is nothing short of incredible. As a point of comparison, the Razer Viper Ultimate weighs in at 74.

While not universally embraced, I’m a lightweight mouse believer. The reduction of inertial forces that slow down flicks and complicates stopping the mouse in-place has significant performance impact on my own gameplay. The Superlight feels like air in my hand, never standing in the way of what I want to do and where I want my mouse to go.

One might hazard a guess that in order to drag the weight down so low, Logitech shucked internal reinforcements. And, you’d be right to an extent.

Miraculously, the mouse body feels just as solid. There isn’t a centimeter of flex to be found in the top or sides, nor a decibel of rattle. There is some minor flex in the bottom if you really try, but I don’t consider that worthy of any further reading. Logitech apparently kept what mattered, and removed the rest.

The Superlight touts ~70 hours of constant-motion battery life, which aligns with my experience. This is actually better than the original, which advertises 48 hours with RGB and 60 without. This is especially impressive considering an easy way to lower weight is to make the battery smaller.

There is some room for improvement, but at this charging frequency it’s far from a pain and easy enough to do overnight when you notice it getting low.

Some have expressed grievance at Logitech’s decision to go with Micro-USB charging instead of USB-C. I, however, really don’t feel this is worth a penalty, as 99% of us will simply be using the included cable every 2 or so weeks and never thinking about it otherwise.

Mouse coating is chronically overlooked. A grippy feeling allows you hold the mouse more lightly, granting a degree of agility and confidence even with sweaty hands.

I was really pleased that Logitech has updated it on the Superlight. It checks all the boxes, feeling perfectly grippy and holding up under sweat. An underrated but appreciated improvement.

Mouse reviewer OG Rocket Jump Ninja is known for the adage ‘Shape is King’, and I’m in agreement. While we have a million things to critique a mouse by, the one that matters most is shape.

The form-factor of the Superlight is virtually unchanged from the original. It’s a potato-like thing that sits tall in the middle and fills out the entirety of your grip. The right side buttons have been replaced (sorry left-handers) with a small ‘lip’ that replicates their presence, which isn’t something I ever noticed, despite being a somewhat confusing addition.

The G Pro Wireless shape is one of the safest in existence. Regardless of how you hold a mouse, you’re going to find something serviceable in it.

But, there ain’t no free lunch. By being so generalized, the Superlight’s shape ends up being kind of mediocre. Palm grippers could find more comfort in a Zowie EC2-esque shape, claw grippers will find something more tailored in (e.g.) an Endgame XM1, and fingertip grippers might find more precision in a smaller mouse like the Razer Viper Mini.

I primarily fingertip grip. While the shape wasn’t a huge hindrance to my gameplay, my aim immediately improved when moving back to a fingertip-oriented mouse. The shape just never felt maximally performant, even after weeks of use. In off days especially, this can end up making a big difference in-game.

One of the most visually striking features of the Superlight is the massive front mouse foot. The three disjoint rear mouse feet of the original have been melded into one, and a removable footed mouse puck is included in the box, allowing you to fine-tune the friction by choosing whether or to install it.

While the material is better than the original, it still pales in comparison to aftermarket feet. In addition, Logitech has cut costs by making them incredibly thin, prompting some concerns about durability and the need to replace them after they’ve been worn down.

Overall, I still felt slowed down by these mouse feet. Even without the puck there was a bit too much scratchy friction between my mouse and mousepad, even after break-in. Logitech was certainly attempting to restore some of the control lost when shedding weight, but went a step too far for me.

Fortunately, replacing mouse feet is the easiest mod imaginable for those who care enough. I myself replaced them with aftermarket skates made for the original, which was a noticeable upgrade as the better material and smaller profiles unlocked some missing speed.

It’s a scroll wheel; probably the least important part of the mouse. The steps are light but defined. The middle mouse click is light enough to actuate easily, but a little on the mushy side. No wobble.

Some might prefer more defined steps or a more tactile click, but I’d be surprised if anyone felt that was the deciding factor to pass on this mouse.

The Not so Great

This is where we see the sacrifices made to the mouse’s internal reinforcements start to manifest.

But, if you palm grip or have large hands and are prone to clicking at the front of mouse button, you’re in for some pretty sub-par clicks. They feel crunchy, wobbly, hollow, and have significant post-travel.

Whether or not this manifests as impactful in-game is a matter of debate. At the very least it’s annoying and distracting, and not at the level of quality one should expect from a $150 price tag.

It’s not all bad, though. Logitech has replaced their notorious double-clicking Omron 50m’s for custom Omron 20m’s that have yet to demonstrate the same problem. They’re also ever so slightly stiffer then the original – a welcome change for me, who would frequently actuate the right click by relaxing my finger just a bit too much.

The side buttons don’t fare much better, and might be the worst side buttons I’ve seen on a mouse in years. Their shape and placement is awful, requiring a significant change in grip to actuate which can be disruptive if needed in the heat-of-the-moment. They feel incredibly mushy, with a lot of post-travel.

Fortunately, this doesn’t matter all that much. This will be a personal call, but for me it’s far from being enough of a problem to harp on it, as they still get the job done and in the moment you aren’t going to be overly concerned with side-click mushiness.

So, did the Superlight re-capture that disruptive energy of 2018? In my opinion: yes, absolutely. In fact, it’s a dead-ringer, including all of the same weaknesses as before.

To achieve this weight on wireless is a feat worth recognizing. The experience of using this mouse is special. It’s not perfect, but the flaws of the mouse fail to detract from the bigger picture. The feeling of freedom this mouse grants is presently unrivaled.

… with emphasis on ‘presently’. The Superlight is positioning itself to be usurped in the exact same ways the original was. It’s a certainty that other companies will follow suit, offering wireless mice that are just as light, with more performant shapes and honed-in features. The landscape is much more competitive now than it was in 2018, and time will tell how long the Superlight reigns King.

For now at least, despite its flaws and due to its general appeal, it’s the King indeed. A more than a worthy upgrade for lovers of the original.

In case you aren’t feeling the Superlight but still want some wireless alternatives, these are worth checking out.

The G305 has a sort of cult following due to its ‘egg’-like shape enjoyed especially by claw and fingertip grippers. It’s also the top budget options for wireless gaming mice, floating around $50. It’s a bit on the heavier side at 89-99 grams (depending on the battery you use), but still a great mouse all things considered.
See also: Nothing. Sorry, not too many worthy wireless budget options!

For palm grippers or anyone looking for an ergo option, you can’t go wrong here. It has the same flawless wireless tech as the Razer Viper Ultimate, with a bit more weight behind it and a comfier shape.
See also: Pwnage Ultra Custom Ergo

It’s worth pointing out that for the really hardcore, a market for custom 3D-printed wireless mice has begun to take shape. Designers like Piranha Mouse Mods sell wireless, ultralight versions of popular shapes. Beware that these can come with a hefty cost and potential wait. For those with access to a 3D printer, files are also available for purchase.