How Much RAM Do I Need for Gaming in 2021? Overview of CAS Latencies, Timings & RAM Size 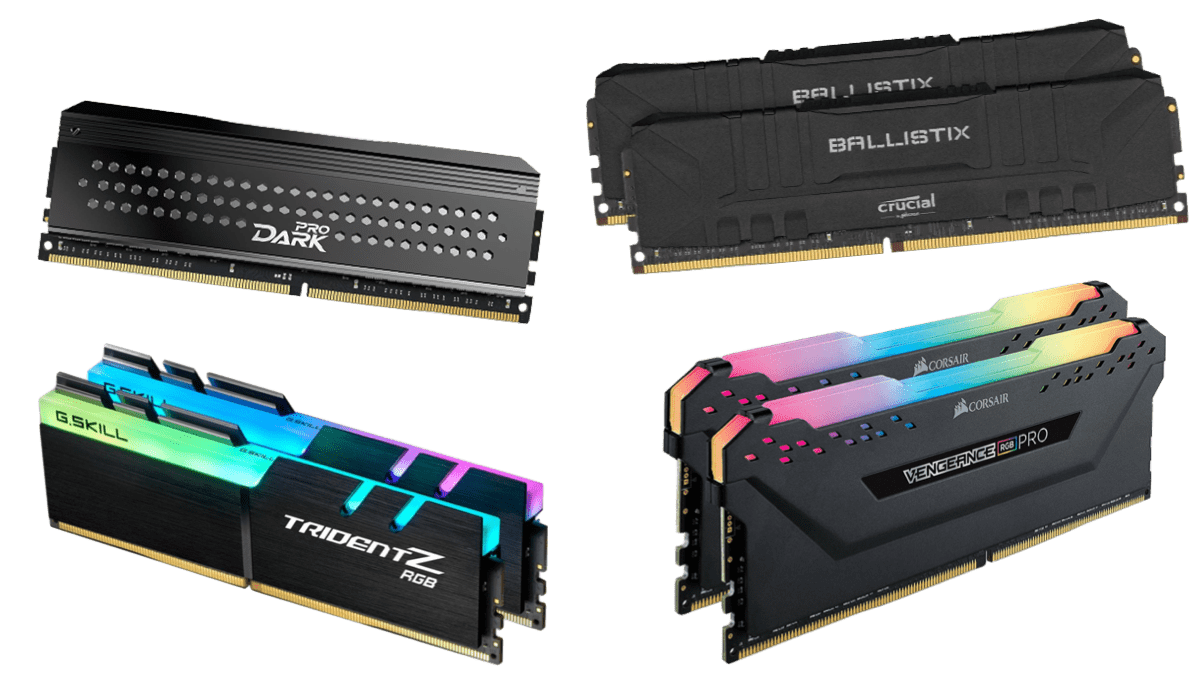 The release of Intel’s 10th generation ‘Comet Lake‘ CPUs, which are optimized for gaming, the release of AMD’s Ryzen 3 3300X and XT series CPUs, the soon to come Nvidia Ampere 3000 series GPUs, and, to top it all off, the release of new generation games for the Xbox Series X and Playstation 5, make it so that there hasn’t been a better time to build a gaming PC in quite a while.

Other than the CPU and GPU, another crucial component in realizing your setup’s full potential is the random-access memory. If the storage size of the RAM is insufficient, you can get frame-drops, stuttering, or even system crashes. Next, if the speeds are insufficient of the latency of the RAM is too high, you can end up bottlenecking your CPU; as shown through Gamers Nexus’s YouTube channel, where the i5-10600K ends up outperforming the i9-10900K in a gaming benchmark. So, before we get to the question of how much RAM is necessary for each intended build, let’s talk about what level of RAM speed and latency you should be aiming for.

First off, if you aren’t planning on building a high-end workstation, then you generally won’t be needing RAM with speeds above 3000 MHz. Not only does RAM become disproportionately expensive at speeds above 3200 MHz, but the resulting performance also experiences diminishing returns, making the RAM hardly worth the extra cost. For high end gaming, streaming and content creation, 3200 MHz will suffice, while mid-range options will work just fine with 3000 MHz, and entry level PC RAM should not exceed 2400-2666 MHz.

What is arguably even more important than the speed of the RAM is its inherent latency. Column Access Strobe (CAS) latency is the measure of how many clock cycles are necessary for the memory module to access data from a column address; and the less the clock cycles, the better. CAS is an extremely important metric that pertains to RAM, since having a high latency will end up bottlenecking any overclocking the RAM is capable of. In fact, when you compare similar branded RAM with identical frequencies, you can notice that the average benchmarks will display an increase of 6-19% in regards to overall speed for the RAM which has a CAS of 14, versus the other with a CAS of 14. Therefore, if you are looking to make a high-end gaming rig (i7-19/R7-R9) then you will need a CAS of 14, whereas a mid-end build can do well with 15-16 CAS, and entry level builds should not have worry about CAS all that much.

Now, in regards to storage size, the answer will ultimately depend on your intended use. Not all gaming is equal, and therefore not all gaming rigs will have the same hardware demands. Online multiplayer games like League of Legends, DOTA 2, or Fortnite are far less hardware intensive – in order to attract a wide audience of users – while, on the other hand, recently released triple-A games, single player and virtual reality compatible games have far higher hardware demands. When looking at the specifications of the next generation consoles, the Xbox Series X and the Playstation 5, we see that both consoles carry 16 GB of RAM, so that should also be enough for desktop gaming, right?

Well, a main difference between PCs and consoles, at least in regards to gaming, is that PC you can adjust resolution and framerate for just about any game. Though both Microsoft and Sony state that their consoles will be able to run games at 4K and 60 FPS, this will most likely not be the case for certain, more hardware intensive, games. If you plan on playing in 1440p or 4K resolutions, or at 100-144hz framerates, then you will probably need more than just 16 GB of RAM. Same goes if you plan to game and stream from the same PC, or if you intend to edit your streams into shorter, streamlined videos.

Now let’s check what storage size is best for each type of gaming setup. To help you navigate to RAM options for your intended type of use, we’ve separated our recommendations into four categories: an entry level online multiplayer rig, a mid-range high resolution and framerate multiplayer setup, a high-end triple-A gaming build, and a gaming-workstation hybrid PC.

If you are building an entry-level gaming PC, or just a rig where you can enjoy games that aren’t so hardware demanding like competitive multiplayer games or emulators, then you don’t need to worry much about buying the fastest RAM there is. In regards to storage size, 8 GBs will suit your needs just fine, as you can always add more down the line if you decide on upgrading in the future.

Crucial’s Ballistix RAM fits this category well for multiple reasons. Firstly, it comes equipped with a thermal solution, so you never have to worry about increased temperatures, secondly, because it has a low-profile form factor, installing them will be a breeze, and thirdly, they allow for overclocking so if you ever want to experiment with the process, or just need some extra power, you’ll have the option to do so.

The Ballistix model we recommend is the 8GB, 2400 MHZ, CL16 DDR4 DRAM kit, which comes with two ranks of 4 GB sticks. The speed of this RAM may seem a bit low, but for the intended use if will work just fine. With their low, 16 CAS you can always overclock the RAM to boost the initial frequency and not have the results hampered by latency, and the extruded aluminum heat spreaders give you some leeway in regards to temperatures; as long as you have a decent amount of airflow cooling within your case.

Given the quality of this RAM, the $34.99 price tag for the 8 GB RAM-kit is exceptional. If your motherboard only has two RAM slots and you want to make sure you have some extra space to upgrade in the future, then be sure to check out Corsair’s Vengeance LPX 8GB (2400 MHz, CL16) RAM, which comes at the same price but includes only a single 8 GB stick.

Just to be clear, 16 GBs of RAM may actually even be more than what’s necessary for this level of a build, but it is always better to have more memory than less. In regards to speed, 3000 MHz is actually the sweet spot where you receive the best value for the money expended, and with a low SPD latency of 15-15-15-36, you can rest assured that you will maximizing your RAMs potential.

Corsair’s Vengeance RAM is an exceptional model, not only because it has all the right specifications we are looking for, but also because this RAM is optimized for overclocking. It has a decent heat spreader, custom designed PCBs and ICs, and XMP 2.0 compatibility; meaning that both the software and the material quality necessary for overclocking are present.

For those that like taking style into account when shopping for hardware, this RAM is as stylish as it gets. The Vengeance RGB comes in black or white modules, and feature 10 individually lit RGB LEDs capable of dynamic multi-zone RGB lighting that can be customized via Corsair’s iCUE software. The best thing about the extra pizzazz is that it hardly influences the price of these units. The 16 GB kit (2x 8GB), with its high frequency, low CAS, and RGB flare currently sells for only $85.99. All in all, this RAM is perfect for a mid-end gaming PC build.

Stepping up a notch in terms of hardware capability, let’s consider builds made for playing triple-A games at their full potential. That means resolutions above 1080p, framerates solely between 60 and 140 FPS, virtual reality compatibility, and of course next generation gaming.

Though it’s unlikely you’ll ever need to use more than 16 GB of RAM solely for gaming purposes, we recommend going for 32 GBs. The reason being that most of us will rarely go into the trouble of closing out processes running in the background, including open web-browser windows with a myriad of tabs open. With 32 GB of RAM you have plenty of leeway to game at a high level, and also not have to worry about other applications limiting your memory storage.

The aluminum heatspreaders featured in the TridentZ are efficient in heat dissipation, and the casing has a stylish brushed aluminum exterior. The built in ICs are solid, and the custom designed ten-layer PCB ensures signal stability which is crucial for overclocking.

Like the aforementioned Corsair Vengeance RGB Pro, the TridentZ also features RGB lighting on the top of each RAM unit, which can also be synchronized via RGB syncing software.

You can currently find the G.Skill TridentZ RGB RAM for $219.99, which includes two 16 GB modules – saving you some some RAM slots if you want to upgrade down the line, or maximizing your RAM slots if you’re using an ITX motherboard.

If you want a PC for more than just gaming, then you are also going to need an increase in RAM storage depending on your intended use. Whether it be streaming, 3D content creation, or 4K video editing, these processes require a ton of RAM storage in order to operate smoothly, and quickly, so it’s not just the gaming aspect that needs to be considered.

We recommend 32 GB of RAM as the base amount of storage for high-end gaming and light video editing, or content creation – though, once again, depending on your use this number will increase respectively. In terms of frequency and latency, its best to aim for 3200 MHz and a low CAS of 14 cycles, so that you have with ample room for overclocking efficiently. Investing the funds, you would otherwise spend on RAM speeds of over 3200 MHz, into an increased storage size is the smart way to go.

The TeamGroup T-Force Dark Pro is a RAM model that cares little for RGB fluff, instead focusing on what matters most: performance. This RAM has a frequency of 3200 MHz and incredibly low CL timings of 14-14-14-31. The ICs are original, high quality chips, build with a Samsung B-Die (which is exceptionally good for AMD processors), and the heatsink features a five-piece build with a unique trench design and an aluminum heat-spreader. To boost the transmitting signal, the T-Force Dark Pro makes use of JEDEC RC 2.0 technology, which is a custom circuit board which keeps the power and signal layers further apart, thus eliminating interference between the signals and allowing for stable overclocking. The overall build is capable of data transfers of up to an impressive 25.6 GB/s. The T-Force Dark Pro is also XMP 2.0 compatible, so setting different overclocking profiles is an always an option.

The current price for 16 GB of the TeamGroup T-Force Dark Pro is $129.99, meaning it will cost $259.98 for 32 GB. This RAM is definitely not cheap, but given the low CL timings, the overclocking-optimized design, and the lifetime warranty included, it is definitely worth the extra cost.