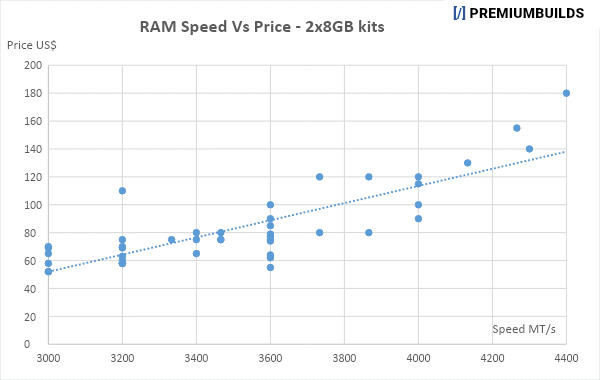 AMD have announced their Zen 3 CPUs and they’re set to release on 5th November. In this iteration they are claiming to have bested Intel in all metrics making these the most powerful consumer CPU’s available. With Ryzen 2 we found there was significant performance scaling with RAM speed increases and this is attributable to the architecture of AMD’s CPUs and the close relationship between RAM speed and the Processors internal clock speeds. In this article we’ll cast our attention to Zen 3 and examine how we anticipate the CPUs will react to RAM speed changes. We’ll use this information to make some recommendations about the best RAM for your Zen 3 based build.

We conducted extensive testing of RAM speeds on Zen 2 to ascertain a number of features of Ryzen CPU performance scaling. You can read that article here, but the summary is:

This investigation leads us to conclude that at current RAM pricing and availability, the compatibility, price and performance sweet spot is 3600MHz RAM. Timings and latency matter much less than stable clock frequency. But what can we infer from this information in respect of 3 CPUs?

The Zen architecture is a remarkably high performance and flexible CPU design from AMD and it has undergone a number of refinements and revisions since it’s inception in February 2017. By using multiple Core Complex Clusters (CCX’s) AMD is able to scale the chips to provide the full range from 4 to 16 core consumer offerings and the Threadripper chips for the HEDT market. These CCX’s share cache memory but communicate with the system and other CCX’s via a separate interconnect chip mounted alongside to form the CPU. AMD term this IO die ‘infinity fabric’. The infinity fabric proves to be the primary limiting factor in the CPU’s overall performance because it dictates the rate at which data can be passed into and out of the CPU as well as between cores within it. Much of the generational improvements in Zen CPUs have been down to reducing memory latency problems and optimising infinity fabric.

Zen 3 has taken a large step forwards in the layout of the CCX’s, with each CCX now having full access to the entire cache memory on the same die. The fundamental layout remains unchanged though and the infinity fabric die remains the same. This chip is fabricated on a 14nm process where the CCX’s use TSMC’s highly effective 7nm process. Therefore we can surmise that there are limited improvements in the infinity fabric speeds beyond normal production refinements that occur over time.

We can therefore safely deduce that infinity fabric speeds will not increase massively in Zen 3: AMD’s performance enhancements have come from other areas.

There is another major clue left by AMD: In their own benchmarks for the exceptionally high-performance RX 6000 series GPUs the test bench systems use 3200MHz RAM in combination with their Zen 3 CPUs: Clearly, AMD are not concerned about ‘slower’ RAM negatively impacting system performance even where their commercial interests are invested in showing their products in the absolute best light. This mirrors our own investigation where whilst frame rate improvements are observable, they’re at settings levels that artificially induce a CPU bottleneck. Whilst it’s nice to optimise your CPU’s theoretical performance limits you won’t actually see appreciable performance improvements in real-world usage except in very specific circumstances.

We can see from this graph the wide availability and affordability of RAM at 3600MHz, spanning CL 16 and CL18 timings and ranging from $60-$80 for the majority of 16GB kits. Between 3733MHz and 4000MHz there is a scarcity of RAM and prices increase with 4000MHz kits largely above $100. By this point we’re comfortably above the guaranteed compatibility speeds of Zen infinity fabric, meaning that XMP overclocks are much less likely to work and you’re more likely to have to dig into secondary RAM timings yourself to find stable overclocks. Finally, RAM at higher speed confers no performance benefit once you are forced to abandon a 1:1 infinity fabric ratio, so the additional spend doesn’t buy additional performance. The emerging picture is clear: 3600MHz is likely to remain the price to performance sweet spot for Zen 3.

Crucial is Microns commercial brand and this kit, the 16GB Ballistix DDR4-3600 CL16 Kit, uses Micron E-Die RAM chips to deliver the performance sweet spot at a very attractive price. 16GB is still ample for almost all games including multitasking. It’s been available for some time at the $75 price point making it a very worthwhile purchase and the best value of all the popular 16GB kits. The 3600MHz speed enjoys widespread compatibility with all Zen 2 and Zen 3 CPUs, whilst the quality of the E-Die chips lend themselves to tweaking and overclocking for even more performance if the mood takes you. If not the embedded A-XMP profile will ensure reliability and stability at the rated speeds. It is a 2x8GB stick for dual channel operation and any RAM kit you consider should be a dual-stick kit because of the large performance benefit that brings. The kit ships with discreet black anodized heat spreaders that integrates well with most builds but it is also available in white or red if that better suits your preferences. With this kit just $10 more than the most basic of RAM kits from less well-established brands we see no reason to opt for anything else.

RAM prices have dropped consistently throughout 2020 and we can now find excellent 32Gb kits at just over $100. If you need slightly more RAM for light video editing work, complex multitasking or some more demanding games then this Team T-FORCE Dark Za 2x16GB kit is an excellent choice. It uses slightly slower CL18 CAS ratings but maintains 3600MHz frequency which is the key metric to obtain the 1:1 infinity fabric ratio performance boost. It’s well supported on QVL lists from MSI, Asus and Gigabyte but check the specific motherboard you’re looking at to ensure compatibility. That said it’s almost certain to work at XMP profile speeds on any Zen 3 configuration but QVL compatibility brings peace of mind. At 32GB for $109 this kit is exceptional value and doesn’t require you to make performance compromises.

If you want to explore the limits of memory overclocking on Zen 3 then there’s no substitute for the Samsung B-Die RAM that makes up this kit, the Ripjaws V 16GB DDR4-4000 CL16 kit from G.Skill. It’s very fast RAM with exceptionally tight timings at the speed, and whilst it’s extremely unlikely to work optimally with the A-XMP profile applied there’s huge scope for manually tweaking timings and exploring optimizations. B-die kits can range from $100 to $500 or more depending on binning but it’s certainly not worth getting a top tier binned kit unless you’re intent on challenging world OC records. If you want to find out for yourself exactly what makes Zen 3 run sweetest, this is the kit for you.

We’ve got a soft spot for a set of four RAM sticks with synchronized RGB here at Premiumbuilds and the G.Skill Trident Z Neo 32GB DDR4-3600 CL18 kit certainly scratches that itch. The core specifications are solid with 3600MHz and CAS latency of 18 so your CPU will operate with a near-optimum 1800MHz infinity Fabric Clock. G.Skill offer a very useful reverse QVL list so it’s easy to ensure compatibility with your chosen motherboard. The RGB can be controlled via any of Gigabytes RGB Fusion, Asus Aura Sync, MSI Mystic Light or ASRock Polychrome software so it integrates well with the rest of your RGB and doesn’t require stand-alone software. The RGB elements are beautifully detailed and this kit will lend some real visual flair to your build.

If your primary concern is the quantity of RAM – be it for a video edit workstation or scientific computation – then the Corsair Vengeance LPX 2x32GB kit is an excellent choice. Our productivity benchmarks showed little to no improvement using faster RAM – RAM access latency simply doesn’t impact tasks like rendering in the same way as it does gaming – but this is still 3200MHz RAM with CAS latency of 16. As mentioned above if it performs well enough for AMD to showcase their new top tier GPU’s then it’s good enough for almost any usage case. Corsair is a long-standing brand and their LPX line is ubiquitous so obtaining matched RAM for future expansion won’t be a problem. Corsair does also offer a 3600MHz LPX kit but supply is patchy and with a CAS latency of 18 the actual memory latency is identical to this kit. If you need to pack as much RAM as possible then sacrificing a little speed for cost and capacity makes sense which is why this kit is a great buy.