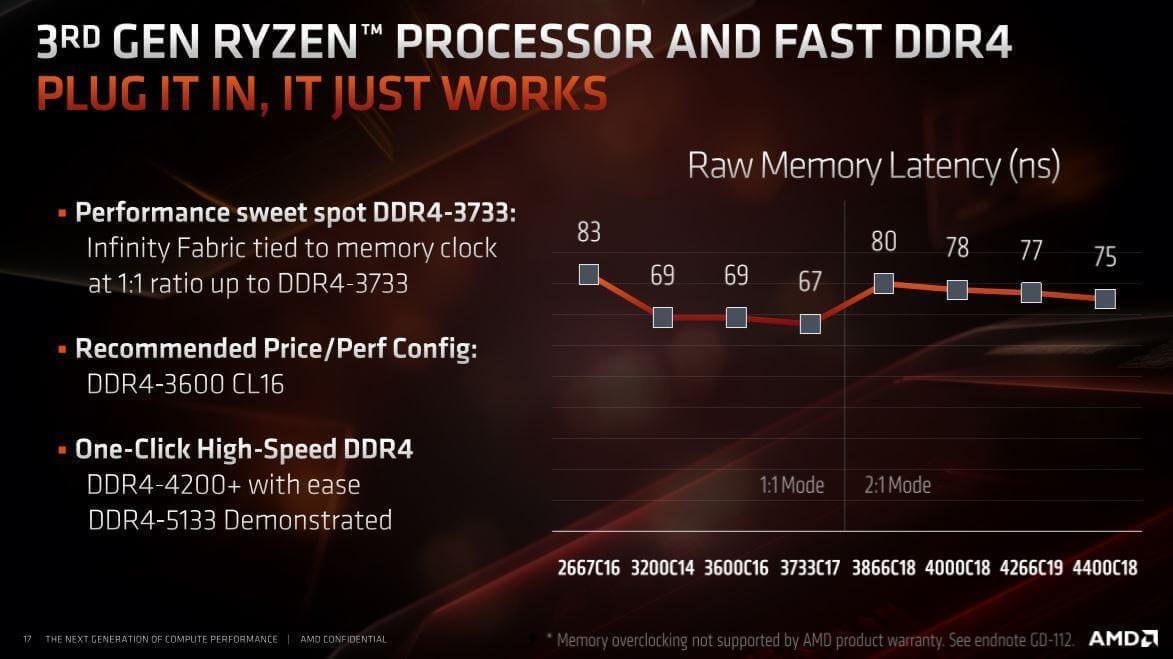 Now that AMD Ryzen Zen 2 has finally been released and PC builders are beginning to get their hands on this highly anticipated line of processors, many are asking the same question for their Ryzen 3000 build – what are the best RAM timings for the Ryzen 5 3600, Ryzen 7 3700X/3800X and Ryzen 9 3900X?

Impressively, the new X570 chipset motherboards for Ryzen Zen 2 support very fast memory clock speeds, in some cases DDR4 RAM is supported up to 4666 MHz! For most builders, however, what is important is getting the most performance and value for the money – and picking the right DDR4 RAM and memory timings to get optimum performance from the Ryzen 7 3700X / 3800X / Ryzen 9 3900X build.

Any RAM kit you do buy for the Zen 2, technically you will be able to overclock it past its claimed rating on the box, which is what the RAM speed guarantees to run at. If you download the Ryzen DRAM calculator it will be possible to manually overclock your RAM past its manufacturer’s rating, or use the XMP technology which makes RAM overclocking far simpler.

In this guide we will show you the best RAM timings to pair with Ryzen 3000 builds – and also offer some recommended DDR4 RAM suggestions for Ryzen Zen 2 builds in 2021. HardwareLuxx did a benchmark testing the Ryzen 7 3700X at different memory speeds, to see which memory timings are the best performing under different tests. We will be using these findings to recommend the best RAM for Ryzen Zen 2 builds.

It is important to note which RAM speeds your build will support is dependent on the chipset & motherboard you build you Zen 2 system with. For example, many B450 motherboards such as the B450 Pro Carbon AC will only support p to 3466 MHz RAM, but the new X570 chipset motherboards will support past 3600 MHz+ – even up to 4666 MHz!

If you’re deciding between CL14 and CL16 memory for Ryzen 3000 / Zen 2 – we would recommend opting for C14 as the best memory rating since it is optimised for tighter timings and utilises B-Die memory from Samsung, which have been known to have better compatibility with Ryzen IMC.

Best RAM for Ryzen 3000 – My Recommendations

According to HardwareLuxx’s recent test where they compared the performance of the Ryzen 7 3700X at different memory speeds, they concluded that DDR4-3600 with a CL18 was the sweet spot for Zen 2 builds, in terms of performance relative to its price.

According to AMD themselves, they recommend 3600MHz CL16 as the sweet spot for Ryzen 3000 series processors, in terms of price to performance ratio, and thanks to the Infinity Fabric technology, memory will scale up at a 1:1 ratio up to 3733 MHz, and above this clock speed it will begin to use dividers, and the performance effects of higher clock timings will become marginally smaller.

It was originally speculated that DDR4 3733 MHz was going to be the fastest RAM for Zen 2, but these tests showed that DDR4 3600 MHz outperformed the higher clock speed rating in many storage capacity tests (Cinebench) as well as in gaming situations, such as Battlefield V and Division 2 FPS tests.

In addition, these results go against the contrary of this Reddit thread discussing the best RAM for Ryzen 3000 – where 3200MHZ CL14 is theoretically the fastest memory when using memory featuring Samsung B-Dies.

Our recommended 3600 MHz CL16 Memory for Ryzen 3000 builds is the G.Skill TridentZ RGB, which features Samsung B-Die DDR4 that helps you overclock this further, timings of 16-16-16-36, and features one of the best-looking heatsinks on any DDR4 memory kit.

If you want maximum performance RAM for your Ryzen 3000 build, or want the best RAM for the X570 chipset – then we recommend going for DDR4 3600MHz CL16 RAM, with Samsung B-Die since these perform exceptionally well on Ryzen systems.

It has been noted that 3200MHz CL14 is theoretically the fastest memory timings for Ryzen Zen 2 compared to 3600MHz CL17 and 3733MHz CL17 on paper, but the recent test at HardwareLuxx goes against this – or at least for the Ryzen 7 3700X.

Thankfully, the test does show that DDR4 3200 CL18 performs (almost) just as fast as DDR4 3600 and 3733 in FPS tests and Storage tests such as Cinebench – and thankfully the 3200 MHz memory speed will be supported by many more motherboards including the B450 and X470 chipset.

3200Mhz CL14 memory kits are far cheaper than the other memory options I have mentioned for Zen 2 builds, and theoretically, you should be able to overclock your 3200MHz kit to 3733 MHz without breaking a sweat using the DRAM calculator.

(Table below has horizontal scrolling enabled – best viewed on a full-width desktop to see all data columns for the DDR4-3200 CL14 RAM. In addition, I have only included B-Die memory as these are by far the best performing on Ryzen systems. If I have missed any that should be included, let me know!)