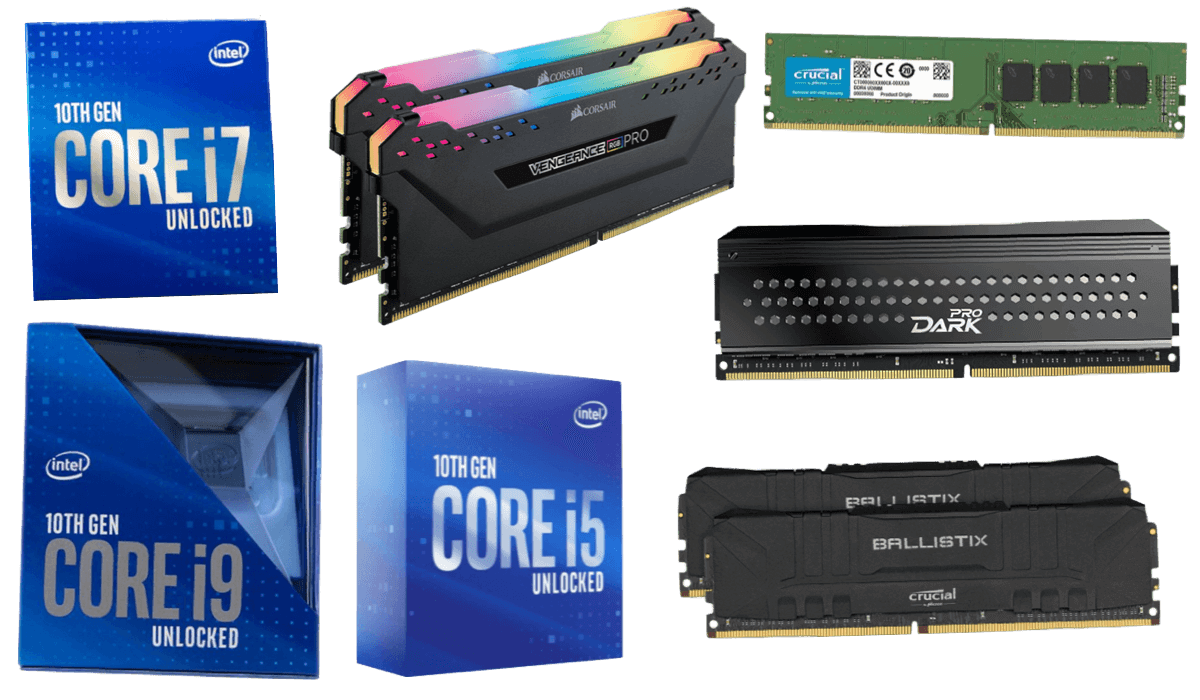 If you’ve bought into the hype of Intel’s newest 10th Generation CPUs, dubbed ‘Comet Lake‘ then you are going to need an LG1200 chipset compatible motherboard: The Z490. With the enhanced RAM compatibility featured by the new 10th generation processors, including the i3-10100, i5-10600K, i7-10700K and i9-10900K, it is a good opportunity to upgrade/purchase some brand new RAM to go with it.

The quality of RAM is many times overlooked, despite it playing a key roll in the overall quality of the build. The RAM enables the CPU to engage in data transfer, software and gaming applications, as well as prevent any occasional slowdowns, stuttering or system crashes.

There are some specific key aspects of RAM that need to be taken into account when planning a new build. Each component of a PC needs to work in harmonious synchronicity in order to avoid bottlenecking issues between units. You can purchase star components which will have a larger share of the allocated to the setup budget, but if the team is weak, that star will not have the opportunity to shine.

The first key component to take into account when purchasing RAM, is the size needed for the intended use. A computer for just desktop applications or video streaming – like an HTPC for example – (for those looking to purchase one of Intel’s new i3 series processors) will need no more than 8 GB of RAM; and even that may be too much. If you are a gaming enthusiast and want to build a PC worthy of the next generation of consoles set to release by the end of the year, then 16 GB of RAM will work out just fine. If you’re worried about this amount of RAM being too low to futureproof your build, worry not, as the announced specifications of the Playstation 5 and Xbox Series X show us that these consoles will also feature 16 GB of RAM. Of course, you can always purchase more if you feel the need to later on, though that money would be better allocated to purchasing better quality RAM, rather than quantity. If you are looking to stream in addition to gaming, or perhaps edit and render high resolution videos, then 32 GB would be a sufficient start. Of course, this number goes up depending on the line of work.

The next key aspect is the speed of the RAM. For workstations, the higher the speed the better, though 3200 MHz should work sufficiently for most applications. The same applies for gaming, as 3000-3200 MHz is more than enough. After 3000 MHz, diminishing effects begin to stack up on each other, and are generally not worth the extra cost. For desktop applications, video streaming, and light gaming use, speeds of 2400-2666 MHz will suffice.

The final key aspect, which is many times ignored when purchasing RAM, despite being of almost equal importance to the RAM speeds, is the latency of the memory. The Column Address Signal (CAS) measures the cycles necessary for the unit to access data from a column address; therefore, the lower the CAS, the better. Having high latency RAM will bottleneck its speed and overall performance. Benchmarks show that a 3200 MHz RAM with a CAS of 15 will outperform the same brand model with 3600 MHz and a CAS of 16. For gaming, a CAS 15 will suffice, while for workstations a CAS of 14 would be best. For streaming and desktop use the CAS will not matter, as RAM speeds for such light use will hardly be noticeable.

To help you choose the right RAM for you, we’ve included the best models for: entry-level i3 builds, gaming i5-10600K or i7-10700K builds, and i9-10900K workstation builds; taking in mind all the aforementioned key aspects, and, of course, pricing.

Crucial is a consumer brand from Micron Technology, an American producer based in Idaho that makes competitive, high quality, memory units and sells them at a fraction of the price of their competitors. For budget i3-10100, i3-10300 or i5-10600K builds, we recommend none other than the Crucial 8GB DDR4 2666 MHz RAM stick.

If you’re looking to build a mini-ITX setup, then you are most likely aware that mITX motherboards RAM slots are quite limited: usually only two slots. Despite Crucial’s $34 price tag, this 8GB of RAM comes in a single rank, so you can always have the option to upgrade further if need be – though 8GB should be more than enough.

Accordingly, the 2666 MHz speeds, and 19 CAS latency are respectable for such builds, as anything more would be overkill for the intended purpose. Another great aspect of this RAM is that it is free of the clunkyness of the heat spreaders of other RAM cards, instead of going for a smaller and thinner design to fit those tightly fit small form factor cases.

It may not have the best latency mark, or any stylish design fluff like RGB lighting, but this RAM is all about functionality, compatibility, and of course, an affordable price; making it a perfect fit for entry-level SFF, and budget, builds featuring the i3-10100 or i3-10300 series Intel CPUs.

Here we’ve chosen two different RAM models, as to better suit different types of gaming builds with the i5-10600K, i7-10700K or i9-10900K. If you want a tempered glass panel case to show off your RGB pizzazz, then the Corsair Vengeance RGB Pro is chosen for you, but if you want a silent case, care little about RGB lighting, or would rather save some money from the RAM purchase, then the Crucial Ballistix is better suitable for your Comet Lake setup.

For both these choices, we recommend the 3000 MHz C15 versions, with 16 GB being the smartest size for a first purchase. Both these RAM choices are very similar in their build: they both have respectable heat spreaders, they have the same speeds and similar CAS latencies, and they both come in different variations to choose from in regards to colors and designs.

The main differences are, that the Corsair option has RGB lighting which can be synchronized via Corsair’s iCue software and provide quite an impressive light show, lacking from the Crucial Ballistix, which otherwise has a low-profile suitable for SFF builds, and is considerably cheaper than the aforementioned option.

If the appearance of your system is important for you, then the price difference will cost you close to an extra $30, as the Corsair Vengeance RGB Pro currently costs $95.99. If you care little for appearances, but rather prefer a more practical or silent setup, then you can find Crucial’s Ballistix option for $69.99.

No matter what you choose, both RAM models are great for gaming builds; and are estimable companions for Intel’s i5-10600 or i7-10700 series CPUs.

For most consumer-level workstations, nothing will beat TeamGroup’s T-Force Dark Pro RAM.

Team Group is a Taiwanese company founded in 1997, and is, for the most part, a manufacturer of memory units; hence why their products have earned them several awards for their price-quality ratios.

The T-Force Dark Pro features 3200 MHz frequencies, and an ultra-low latency of C14 cycles, with CL timings of 14-14-14-31, rendering it capable of data transfers of 25.6 GB/s. Enhanced by the use of JEDEC RC 2.0: a customized circuit board with an increased distance between power and signal layers, which boosts the transmitting signal by 35%. Additionally, this RAM is optimized for Intel’s XMP technology, allowing you to apply multiple memory settings to different profiles for a quicker change of overclocking settings. To dissipate the resulting heat from the application of such overclocking settings, the T-Force Dark pro has a five-piece heat sink with an aluminum heat spreader. Finally, the chips used are all original integrated circuit chips.

For the quality and specifications of this RAM, the T-Force Dark Pro’s $129 is exceptional – definitely the best price-value ratio available for RAM suitable for an i9-10900K workstation build. This price includes 16 GB (two 8GB ranks) of RAM, so for 32 GB the price will rise to $259, which is still exceptional, and will suffice for the majority of consumer-level workstation, and enthusiast i9-10900K setups.