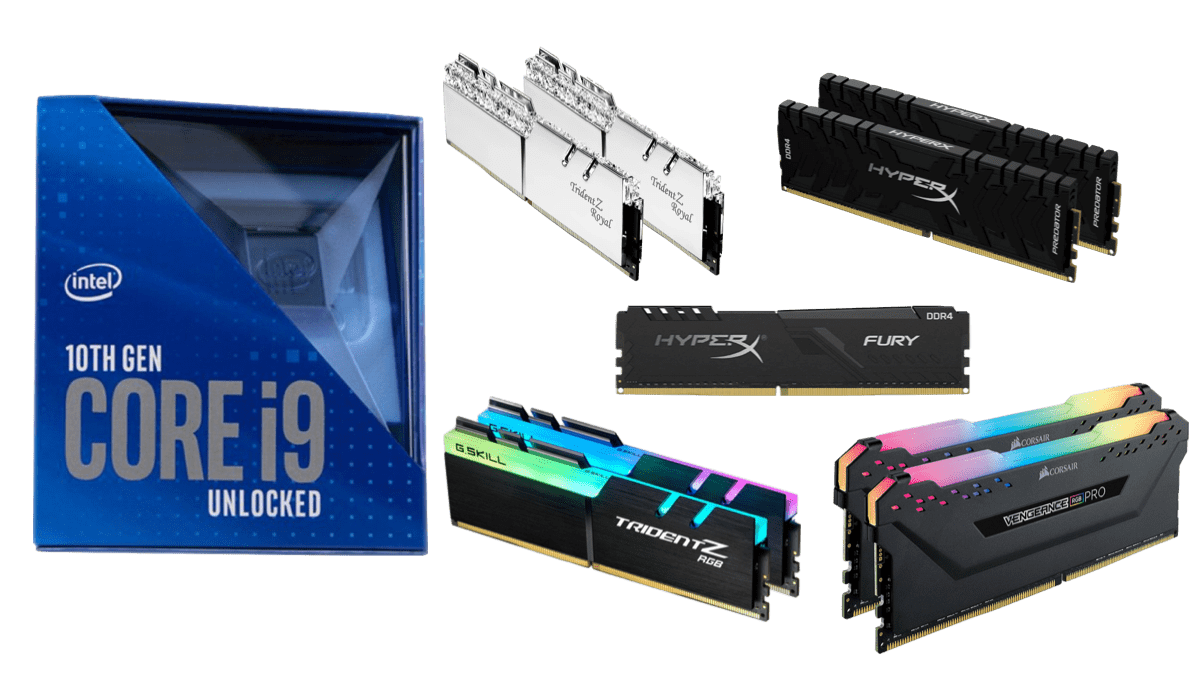 Intel has once again established their position at the top of the performance tree. The Core i9-10900K is a 10 core CPU with exceptional gaming performance and solid productivity capability. To get the most out of it you need to pair it with high-quality RAM. In this article, I’ll describe the attributes of RAM that make a meaningful difference to your PC’s performance and run you through our selections of the best ram for a number of common scenarios.

RAM is the temporary working space where your PC holds data as it’s being accessed by your CPU – any ‘live’ program will be held in RAM as it’s the lowest latency and highest bandwidth memory space available to your CPU. A number of characteristics dictate exactly how responsive RAM is to request for access by the CPU and these can dramatically improve your PC’s performance. Capacity is key and you’ll need enough RAM to complete the tasks you’re envisaging using your PC for. If you are strictly gaming then 16Gb is adequate although some demanding games and simulators do benefit from 32Gb. For video and music production 32Gb should be considered a minimum although big projects and high resolutions will use 64Gb. Finally, if you have a specialist usage case such as scientific modelling, machine learning or other highly data-intensive applications you may find that a full 128Gb is necessary.  The i9-10900K has a dual-channel memory controller meaning that in all cases you require a matched pair or matched set of four RAM sticks to obtain optimum performance. In this configuration, the CPU memory controller can access each stick via a parallel memory channel and this dramatically increases bandwidth over a single stick and single-channel configuration.

The features that deserve most attention are: Frequency and CAS latencies.

Frequency is the clock frequency that the RAM is rated to run at. DDR ram means ‘Double Data Rate’ and RAM of this type can be accessed on the rise and fall of the clock cycle – the faster the frequency the quicker the next read or write widow comes around, and the lower the access time. It’s worth noting that some diagnostic tools report the base frequency of RAM, but it’s always marketed using the doubled ‘DDR’ frequency. Ram rated at 3200MHz will, in fact, have a 1600MHz base frequency, accessible twice in each cycle.

CAS latency is a rating in clock cycles that indicates the time to response of a request to the RAM. There are a number of different requests that a CPU memory controller will make of the RAM, to move data, read, write and clear memory. The CAS latency ratings give an indication of the overall responsiveness of the RAM and lower numbers are better.

By combining these two characteristics, how often the RAM can be accessed and how quickly it responds to requests, we arrive at ‘First Word Latency’. This is a value in nanoseconds of how quickly after a request is made the ‘first byte’ of information arrives at the CPU and can be used for a calculation. The memory controller requests information in order from most to least critical so that the CPU gets to work as soon as possible. A lower first-word latency means more CPU time spent calculating, and less time waiting for input.

How does this information help you in your search for RAM? The questions you need to ask yourself are: How much capacity will I need, what performance am I looking for, and what other features do I want it to have?

In all cases for the i9-10900k, we’ve opted for at least 32Gb of RAM. It makes no sense to buy the top tier Intel CPU but limit its versatility through inadequate RAM capacity and 32Gb is adequate for a wide variety of tasks. Whilst speeds are important it’s not worth paying over the odds for the highest speed RAM unless you’re an enthusiast overclocker: You won’t see any performance benefit worth the increased cost beyond speeds of 3600MHz CAS 16. For that reason, in most cases, we’ve chosen 3200MHz speeds with CAS latencies of 16 or lower to ensure good performance without spending excessively. Here are our RAM recommendations by usage case for the i9-10900K.

If you’re on the lookout for RAM for a gaming build Corsair have you covered. This kit includes RGB with an attractive heat spreader design. Speeds of 3200MHz and CL16 latency mean fantastic performance can be obtained by the embedded XMP profile. It will integrate using Corsairs iCue software for integrated lighting effects across any other Corsair RGB peripherals including fans and lighting strips but it’s also compatible with MSI, Gigabyte and Asus RGB software so you can minimise the number of applications you need to control your lighting. 32Gb of memory is ample for all current games even if you mod them heavily or if you’re streaming and using background applications such as OBS or Discord.

RGB ram adds an attractive glow to your ranks of memory and the ideal configuration for looks is to fill all four slots with RAM sticks with addressable RGB. This kit from G.Skill has fast 3200MHz speeds and low CAS Latency of 16. It can be controlled from all the main motherboard manufacturers lighting software – Asus Aura Sync, Gigabyte RGB Fusion, MSI Mystic Sync and ASRock Polychrome sync. This gives you a free choice of compatible motherboards and prevents you from having to install additional proprietary software just to control your RGB. G.Skill have an established position with the result that their ram appears widely on QVL lists meaning compatibility at the rated speeds across a wide range of motherboards is assured.

If you want the showiest of RAM for a feature build then you need to check out the G.Skill Trident Z Royal line up. G.Skill have looked to all things bling for its latest heat spreader design and these RAM kits wouldn’t look out of place in a Rodeo Drive jewellers.  It is available with gold or silver heat spreaders so you can match it to water loop fittings, motherboard heat sinks or any other highlight themes in your build. The RGB light spreaders have an attractive crystalline pattern which set off the lighting effects very well. It’s available in a range of speeds from 2666MHz to 4800MHz depending on your goals and budget but for the maximum show, the 4 stick kit of 3200MHz ram is an excellent choice and has the go-to match the show.

If you’re looking for the ultimate performance from your RAM then this outrageous kit from Kingston should be high on your list. It appears on the Qualified Vendor Lists (QVL) of premium overclocking Z490 motherboards the Gigabyte Aorus Elite and the MSI MEG ACE. A pair of 8Gb single rank DIMMs place the least strain on the CPU memory controller enabling you to push the boundaries of overclocking speeds. Rated at a sky-high 4800MHz with CL19 CAS latency, it’s amongst the fastest performance you can buy with an ‘XMP’ profile making a one-click overclock possible. These speeds require 1.5V, at the normal 1.35V standard you will still obtain 4000MHz CL19 speeds. The only problem? The price. As is always the case if you’re looking for the highest performance you’re competing against enthusiasts with deep pockets to pursue their hobby: You’ll be paying around $500 for this RAM kit.

If you’re looking at the Intel i9-10900K for use in a productivity build, a 64Gb RAM kit may well be justified. Task such as video editing, music production, compiling code, CAD work or 3D rendering can all utilise this capacity. The low key looks of this RAM kit will blend well into a workstation PC whilst good speed of 3200MHz and CL16 ensure you’re getting excellent performance. Single rank 16Gb DIMM kits places less load on the CPU memory controller meaning more stable and higher speed operation, vs 32Gb Dual rank kits. The no-frills nature of the kit gets you maximum value for money letting you focus your budget on other important components of the PC.

If you’re a power user who needs to maximise the RAM capacity of their PC this kit is the most cost-effective way to get 128Gb RAM on an Intel 10th gen platform. The kit uses a matched quartet of 32Gb G.Skill 3200MHz sticks and will fully populate the 4 slots on any Z490 chipset board: If you need more RAM than this you’ll be raising a purchase order for an Intel or Ryzen HEDT system and spending thousands more on the system as a whole. The 3200Mhz speed and timings are good but it is worth noting that controlling 4 dual-rank DIMMs places a heavy load on the CPU memory controller. For that reason, it’s sensible to remain conservative with speeds for the sake of stability and reliability. G.Skill back this kit with a lifetime warranty so your investment is secure if you do encounter any issues although that’s exceedingly unlikely.

I hope this article has given you the guidance to choose the RAM to pair with your i9-10900K to give you the optimal solution for your PC build.