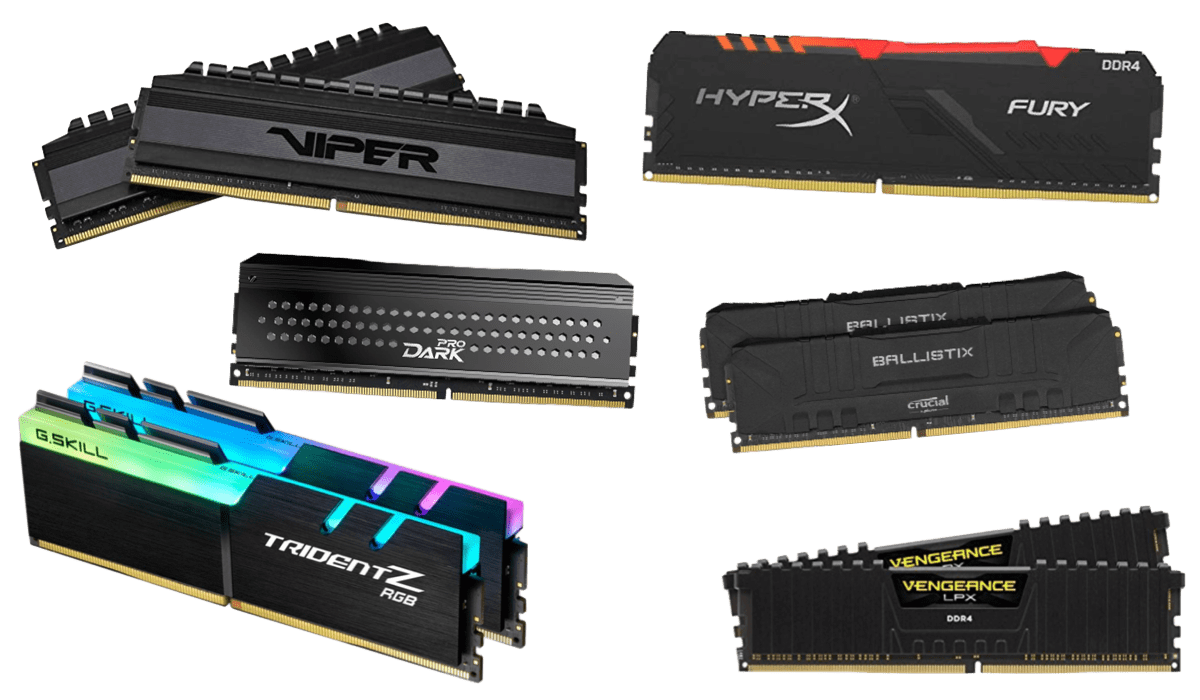 It’s time for another installment of our manufacturer comparison series! We’ve previously covered the most prevalent Graphics Card AIB (add-in board) partners, as well as the biggest Motherboard manufacturers on the market. Today, we’re going to take a look at the most popular Memory (RAM) manufacturers and offer a brief rundown of each one, their reputations, and when you might consider opting for a new memory kit from them. By the end, you should have a better understanding of the RAM market and be able to make a well-informed decision on which brand is right for your next PC!

Kicking things off, we have one of the world’s most premier PC hardware manufacturers: Corsair. Corsair is probably one of the most renowned brands for everything from PC cases, power supplies, and peripherals, to CPU coolers, high-speed storage devices, and, most importantly for today, system memory! Not only does Corsair consistently offer some of the best build quality, performance, and variety on the market, they have stellar customer service and excellent warranties for every product they provide as well. They’re very similar to the famous GPU manufacturer, EVGA, in that respect, on top of the fact that they’re also an American-based company.

Now, concerning their RAM, all Corsair memory kits are covered by a lifetime limited warranty and are guaranteed to come in a size and speed suitable for any build from the most conservative entry-level systems, to the most overkill workstation powerhouses worth thousands of dollars. Further, Corsair’s LPX series of low-profile RAM is essentially the de facto choice for anyone building a small form factor (SFF) PC, as they’re typically the best performing DIMMs to opt for in compact cases that have limited clearance. Corsair has undoubtedly earned its reputation in the DIY PC building market, so much so that you’ll be hard-pressed to find much fault with anything in their lineup, let alone their RAM offerings. However, despite the reliability and quality of Corsair’s DDR4 products, they can’t quite claim the performance throne since they share it with another company…

While G.Skill does have a handful of other products like a gaming mouse, some keyboards, a couple of headsets, some storage devices, and some power supplies, it’s primarily known for one thing: RAM. G.Skill is the other “top dog” in the RAM market that offers an insane variety of memory kits up to, and including, 256GB 8-piece sets of their gaudy Trident Z Royal series with gold or silver finishes and crystalline RGB light bars. Being such a highly specialized/focused company, G.Skill also gets to enjoy the benefit of binning the best DRAM chips to the point where they have a decent majority of the higher-quality Samsung dies wrapped up in many of their products. While the particular die manufacturer may not make or break a specific set of RAM, be it Samsung, SK Hynix, or Micron, Samsung is the largest company that creates the DRAM semiconductors that make our computers a possibility. Thus, with G.Skill basically having their pick of the litter, they’re able to eke out consistent performance leads by not only clocking their memory kits higher but with lower CAS Latencies as well.

G.Skill wouldn’t be particularly worthy of the phrase “top dog” if they only competed with Corsair in quality and performance, however. They also have excellent customer support that will go out of their way to help you in the event something goes wrong with your RAM, as a limited lifetime warranty covers all G.Skill memory as well. It’s here I can speak from experience, as I’ve gone through the RMA process with G.Skill and left nothing but satisfied. However, there is a stark contrast between G.Skill and Corsair being Taiwanese and American companies, respectively, and the English support for G.Skill is relatively small, so their turnaround is markedly slower. If you look hard enough, you can find horror stories regarding any number of companies’ customer service, but by and large, most simply want to help you to the best of their ability to keep your patronage!

Next up, while G.Skill and Corsair typically trade blows on price-to-performance, we have Kingston, specifically with their HyperX FURY and HyperX Predator series of RAM. As we go down the list of manufacturers today, we’ll start to notice less and less variety in the gaming/performance specific memory with which most PC builders are familiar. However, that doesn’t mean they’re significantly worse, nor that they’re inadequate for even high-performance workstation/gaming builds. The prime example being Kingston’s HyperX RAM, which is a stellar way to pay a little bit less and suffer no performance or reliability penalty in the long run given how well-reviewed they are across all e-tailer sites.

When it comes to their support, you’ll be pleased to know that there is a standard lifetime limited warranty for all of their modules. The guarantee even extends to the DDR3 kits that they still have to offer if you’re looking to breathe a bit of life into some older hardware instead of completely rebuilding. Kingston is another American-based company with stellar customer service to back up their value-packed offerings as well, so you can rest assured that if you ever run into any issues, you’ll be in good hands.

Our fourth primary memory provider is Patriot Memory, another American electronics manufacturer with stellar price-to-performance value courtesy of their Viper series. Since 2003, when the company released its first line of branded DDR SDRAM and actually helped popularize the use of bladed heat spreaders, even on memory modules that don’t run particularly hot to extend longevity and improve performance.

While they do have assembly lines in the US as well as Taiwan, Patriot can keep manufacturing in-house in America thanks to their highly efficient logistics processes and structure. As is customary with popular and reputable manufacturers like the others found on today’s list, Patriot Memory provides a limited lifetime warranty on all of their different Viper memory modules. While they may not have the absolute lowest latencies/tightest timings on the market, series like the Patriot Viper Steel DDR4 sets are an insanely economical way to nab some high-frequency RAM for ultra-cheap prices.

Crucial is the penultimate brand on our list, and quite the intriguing one at that, as it’s actually just a subsidiary of one of the “Big Three” DRAM producers on the market: Micron. Micron, and by extension, Crucial and BallistixGaming, is the final noteworthy US-based entity in the SDRAM market for regular use, enterprise deployment, and high-performance gaming PCs alike. Chances are if you’ve been given a laptop for school or work, it either has a set of Crucial memory installed, or it will if you decide to order an upgrade.

For most of us and our purposes, however, we’re concerned primarily with Crucial Ballistix performance memory. With Ballistix RAM, you’re guaranteed a certain level of quality since all Crucial memory is made with components directly from one of the top three SDRAM providers in the world. While Ballistix memory may not be the pinnacle of RAM performance, it’s certainly going to be capable of taking the heat from your most intensive gaming or productivity sessions and stand the test of time thanks to another solid limited lifetime warranty.

Last but not least, we have a Taiwan-based brand: TeamGroup. The youngest/most recent manufacturer on the list, Team Group Inc., which was started in 1997, and has only recently begun to make a name for itself with their T-Force series of DDR SDRAM. For many builders, T-Force presents the most bang for the buck in terms of realistic memory performance. Not to mention one of the cheapest options for vivid and flashy full-length RGB light bars integrated into the installed heat spreaders.

Regardless of how comparatively obscure TeamGroup and their T-Force memory might be, they’re far from the worst choice for builders interested in saving some extra cash on their next build. Especially considering the bountiful 5-star reviews for several of their mid-range T-Force RGB kits on both Amazon and Newegg. Finally, it wouldn’t be a proper recommendation without mentioning that Team Group joins the party in offering a lifetime limited warranty for all of their RAM modules.

There really hasn’t ever been a better time to become a PC builder. Aside from the impending release of new-generation GPU and CPU hardware, the level of freedom and choice available to DIY enthusiasts and prospectives alike is unprecedented. We’re at a point where there genuinely aren’t many choices you can make for something like your RAM that can indeed be considered “bad.” You may get unlucky and have to submit an RMA request and deal with customer support from one brand or another, but by and large, the very worst-case scenario for RAM in most systems nowadays would be “sub-optimal.” It’s unlikely we’ll see much change within the memory market until DDR5 becomes the new standard; and companies begin to compete for the highest-quality/highest-performance semiconductors for a completely new design.

What do you think? What have your experiences with these brands been like in the past or recently? Do you have a better understanding of the major players in the memory space? Let us know your thoughts in the comments below, and, as always, thanks for reading!