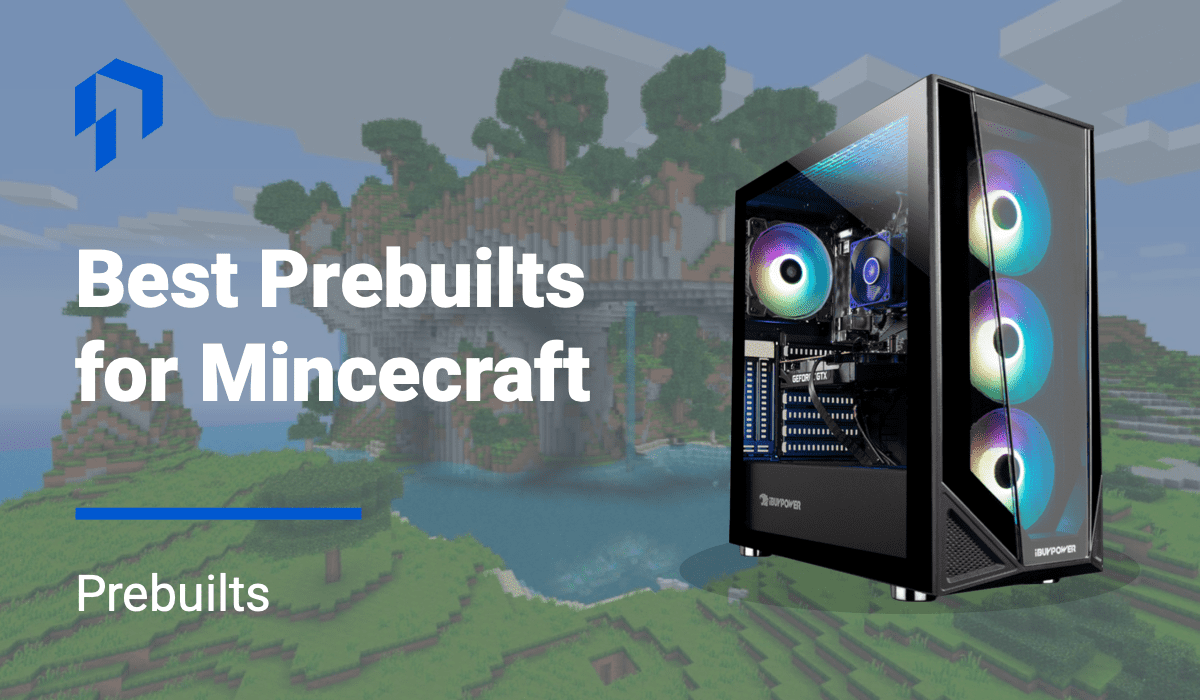 Unless you’ve been living under a rock for the past decade, a game like Minecraft deserves no Introduction. The blocky survival sandbox game became skyrocketed in popularity among kids and adults alike– and it only continued to grow in popularity since. In 2019, Minecraft was officially crowned as the best-selling video game of all time. Its not surprising, as Minecraft promises players to flex their creative muscles and explore stunning biomes to their heart’s content.

One of the main factors behind Minecraft’s immense fame is how easily accessible it is. Minecraft has very low system requirements if you just want to build and explore its vast procedurally generated worlds. This allows almost anybody to download and get right into playing without having to worry about their system’s specifications.

If you’ve been watching the Minecraft hype train chug along from the outside for the past few years, and wish to see what all the fuss is about, you may in need of a new gaming system. Or maybe you have a younger sibling who adores Minecraft in need of a new mining (pun intended) system. With the current state of the PC hardware market, its safe to say that building your own computer is downright impossible. However, you’re in luck! because buying a prebuilt PC has become an extremely viable– not to mention cost effective– alternative!

To make your lives easier, we have compiled a list of prebuilt gaming systems that can run Minecraft. These are all from reputable brands, at various performance tiers and under a variety of budgets. You are free to pick from any of these to suit your needs, and be confident that you can get a solid Minecraft experience.

If you’re on a tight budget and is looking for a no-nonsense PC that can reliably run Minecraft; meet the Dell Inspiron. By no means is this system a “gaming PC”. But that doesn’t mean that it’s totally incompetent either. The Inspiron runs an Intel Core i5 10400 processor with 6 cores and 12 threads. It’s a pretty solid midrange processor with plenty of cores and clock speeds to boot. The Inspiron also has 12GB of DDR4 memory running at 2666MHz. While its unconventional to see 12GB of RAM in a system, its certainly better than having just a single stick of 8GB memory.

For storage, you get a 1TB hard drive, which is expected at this price point. In terms of graphics, there is no dedicated GPU in the Dell Inspiron Desktop. Its solely running on Intel UHD 630 integrated graphics. Fortunately, since Minecraft is an extremely lightweight game to run, simply put; that’s all you will need! If you turn down the render distance a bit, this system is able to give you a surprisingly enjoyable Minecraft experience at 1080p with framerates over 60 FPS. Starting at $550, this system is truly a testament to Mojang’s amazing optimization of Minecraft. Of course, it goes without saying that you probably shouldn’t attempt the Minecraft TNT test on this system.

View on Dell.com
View on Amazon

by upgrading the budget slightly, you can actually get a proper gaming PC for a pretty great Minecraft experience. At $750, the iBUYPOWER Gaming RDY prebuilt system is a marvel in terms of value (especially in the current PC market). It packs an AMD Ryzen 3 3100 CPU with 4 cores and 8 threads. The included memory is only a single stick of 8GB RAM, but you can always upgrade to another 8GB down the line. An important thing to note is that iBUYPOWER uses off the shelf components for their builds. A fast 500GB SATA SSD is the storage solution, meaning that you will have plenty of space to store your games along with lower load speeds.

The real star of the show is the Nvidia GeForce GTX 1650 Super in the system. This is a great budget GPU that is quite frankly more than what the average or even the hardcore Minecraft player needs in order to run the game well. With this system, you will easily get over 200 frames per second in Minecraft at 1080p. The available performance headroom even allows you to play with mods and other somewhat demanding add-ons to Minecraft that you might fancy dabbling in. The system is powered by a very capable 500-Watt power supply, so you won’t need to worry about any power constraints.

If you’re someone who wishes to push their system a bit harder with Minecraft, this Cyberpower prebuilt is the perfect fit for you. It packs plenty of power, with its Intel Core i5 9600KF and the RX5600XT; meaning you will be hard-pressed to find a scenario in Minecraft where this system struggles. Due to the extra graphical horsepower provided by the RX5600XT, you can choose between running Minecraft at very high framerates at 1080p, or even running at 1440p without an extreme loss in FPS. You can even play around with Minecraft shaders and other intense graphical mods without diminishing your experience.

It’s also got 16GB of RAM running in dual channel mode at speeds of 3200MHz. For storage, Cyberpower has included a 240GB SSD for your OS, with another 2TB HDD for mass storage and games. Its safe to say that with these specifications, you won’t be having any complaints. The entire rig is powered by a 600W 80 Plus Gold certified power supply. And since Cyberpower also uses off the shelf parts, upgrading will be extremely simple.

View on Cyberpower
View on Amazon

Maingear has a history of making sleek and eye-catching builds while not slacking off on performance. This stays true for the Vybe Stage 3. This PC is more or less every Minecrafter’s Endgame setup. It’s got all the power you will need. Starting off with the Ryzen 5 5600X—a particularly fast 6 core 12 thread processor that leaves most other processors of the same calibre in the dust. For graphics, Maingear has chosen the Nvidia RTX 3060Ti. The recently released Ampere GPU is one of the best value-oriented graphics cards one could buy (alas, no one actually can). Its slightly more powerful than the last generation’s RTX 2080; which means you’re going to get insane levels of performance in Minecraft. If you want to play with maximum render distance, in 1440p or 4K—even the notorious TNT test—the Maingear Vybe is ready to do it all and more.

Its also got 16GB of fast 3200MHz memory, along with a 512GB Intel M.2 NVMe SSD. For mass storage you also get a 1TB hard drive, so you can keep your frequently used applications and games on the blazing fast SSD while delegating everything else to the HDD. The system is powered by an efficient 500-watt power supply. With off the shelf internals, a sleek build with plenty of flash and RGB for $1699; the Maingear Vybe Stage 3 is a performance PC unlike any other.

If you’re after the elite Minecraft experience, with levels of performance that the average player can only dream of; the Alienware Aurora R10 is tailor-made for you. With a price tag of $2919, it’s unapologetically elite. The Aurora sports an AMD Ryzen 9 5900 processor with 12 cores and 24 threads, meaning that being CPU bound in Minecraft will be a thing of the past. With the Nvidia GeForce RTX 3080, this is the first system where you can confidently run Minecraft RTX in its full capacity at 4K without worrying about the framerate. The Aurora is perfect for those of you who don’t mind spending as much as it takes to get the best possible Minecraft experience. And in today’s climate, getting a Zen 3 system with a RTX 3080 for a mere $2919 is an absolute steal.

The rest of the specs are no slouch either. The Aurora has 32 GB of dual channel memory running at 3200MHz, a super-fast 1TB PCIe NVMe SSD—all powered by a 100W power supply from Alienware. With its steep price comes a very impotent guarantee; this one-of-a-kind system is going to last you for many years of full throttle gaming.

That completes our roundup of the five best prebuilt systems that you can get in order to quench your thirst for some long overdue mining sessions. It’s quite surprising to see how the tables have turned in the PC industry; where prebuilt systems are now the default choice when it comes to obtaining a new system. Its very easy to overspend on a prebuilt where you get more frills rather than raw performance. But if you choose any of the above five systems, you can rest easy knowing that your money will be well spent on a competent gaming Minecraft system.

We can only hope that the market returns to normal (although there’s little chance of that happening anytime soon). Until then, follow along with our guides to get yourself a beastly prebuilt gaming PC that you won’t regret! Keep in mind that all of the above systems may be sold out at any given time, as well as their prices are prone to fluctuate.

Check out some of our other prebuilt guides below: