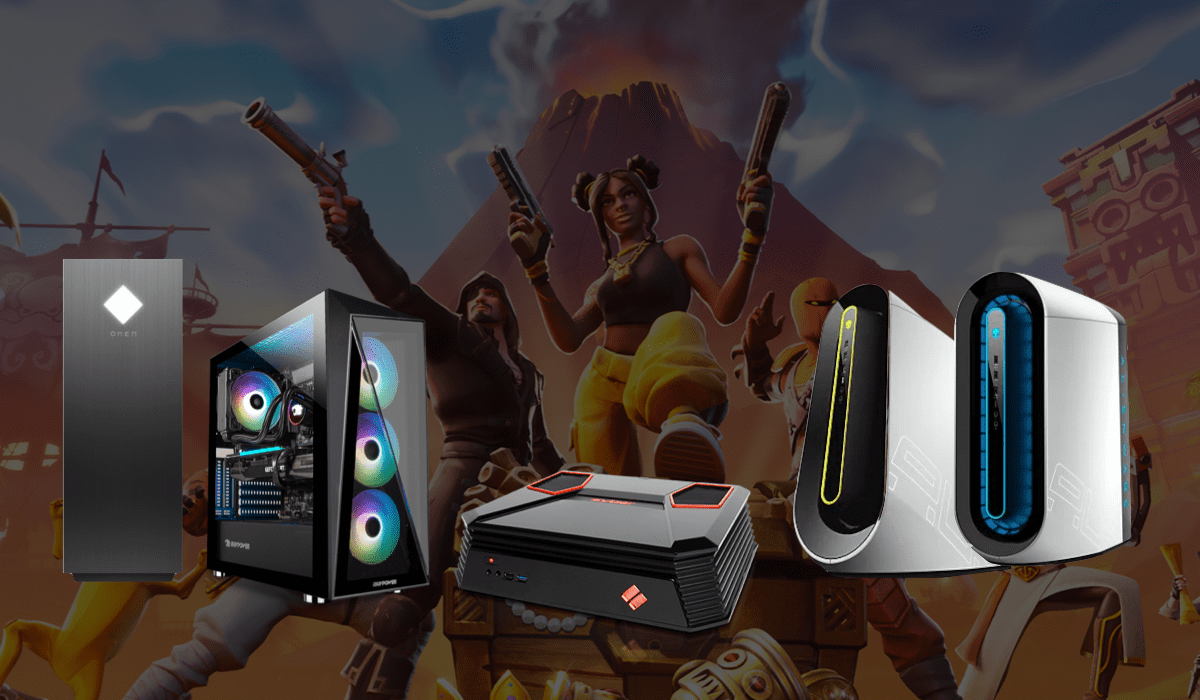 It’s no secret that Fortnite is a monstrously popular game. It’s been uber-popular since the launch of the free-to-play battle royale extravaganza way back in 2017. Fortnite has constantly been among the top ten most-played video games in the world. Its simple yet addicting playstyle, combined with its never-ending drops of new cosmetics are a few reasons behind its popularity.

One of the biggest reasons for Fortnite’s rise to fame is its ease of accessibility. The game is very well optimized to the point that even pretty low-end hardware is able to run it. This means that little Johnny can get some dubs using grandma’s old OptiPlex without having to break a sweat.

But a prebuilt PC tailored for Fortnite will be your best bet if you need something stronger. Plus, given the abysmal state of the PC hardware market right now, you can forget about building your own unless you wish to spend thousands of dollars on a graphics card alone!

To make your life easier, we went ahead and compiled a list of the best-prebuilt PCs for Fortnite in 2021 that will get you all the frames you need. And remember; frames win games. So, read on to choose the prebuilt Fortnite machine that fits your budget. Maybe you want to surprise your little brother (or son) with a brand-new gaming PC. We’re confident that you will find exactly what you need from our comprehensive list!

We categorized our curated selection of the best prebuilts for Fortnite into different tiers of resolution, and target framerate. This will further help you narrow down the exact specifications you want for your budget. Additionally, Fortnite’s super-low asking price means that the entry-level prebuilts will be very affordable.

If you really have to scrape the bottom of the barrel in performance, this selection is for you.

At $432, the Dell Inspiron desktop is nothing special, but that doesn’t mean you should completely disregard it. If it’s strictly Fortnite you wish to play, this unassuming machine can handle it, albeit at low settings at 1080p.

It runs a 10th Gen Intel Core i3 10100 processor. With 4 cores and 8 threads, this is a very competent gaming CPU. The other specs include a single stick of 8GB DDR4 memory at 2666MHz and a 1TB 7200RPM SATA HDD. For graphics, the Inspiron Desktop runs solely on the onboard Intel UHD graphics 630. It’s certainly no gaming champ, but Epic Games’ amazing optimization runs Fortnite at a playable framerate at low settings.

But it does not end there. We suggest that you buy a low-end GPU from eBay and chuck it in there as well. This will net you a pretty decent performance boost. Since even the most barebones GPU will be a big improvement over Intel graphics, we recommend the Nvidia GT 1030. You can find these on eBay relatively easily going as low as $35 US Dollars. At a total of $462, you will be able to run Fortnite at 1080p and maintain frames of over 60. Not bad for an Inspiron!

Keep in mind that Dell uses proprietary components for nearly all of their prebuilt systems. So you won’t be able to upgrade this PC to your heart’s content. The limited wattage of the built-in power supply means that you won’t be able to fit a beefier graphics card without running into power limitations.

View on Dell
View on Amazon

It’s very easy to achieve a solid 60 frames per second in Fortnite when playing on all low settings. But it’s not going to be a pleasant experience. You won’t be able to take in the views or admire your flashy new skins. Which— let’s be honest— is one of the main reasons one plays Fortnite.

If you want to have a 60fps experience at higher graphical settings, iBUYPOWER has got you covered.

This flashy prebuilt comes with an Intel Core i3-9100F, which is plenty for most games including Fortnite. It’s got a single stick of 8GB DDR4 memory running at 2666MHz, a 500GB SATA SSD for fast storage, and a GTX 1650 from Nvidia. All this is powered by a 500-Watt power supply rated at 80 plus Bronze. For just $699, this makes for a very capable Fortnite gaming machine.

With most of the settings set to high, you will be able to enjoy a solid 60+ FPS while being able to take in all the details of your hard-earned cosmetics!

Unlike Dell, iBUYPOWER uses off the shelf components in all of their prebuilts, meaning that you are able to easily upgrade any component in this system in the future, if you wish to.

View on iBUYPOWER
View on Amazon

Unlike most other games, Fortnite doesn’t require you to spend ungodly amounts on a gaming rig in order to play at high framerates. If you’ve got a little over a thousand dollars, you will pretty much be able to enjoy Fortnite with zero compromises.

The Syber C Pro packs quite the punch for $1384. It’s got an Intel Core i5 10400F processor with 6 cores and 12 threads that allow you to game and multitask to your heart’s content, and an Nvidia GeForce GTX 1660 Super which will always give you over 120 frames per second in Fortnite with high settings, so you don’t have to miss a thing.

The rest of the specs are comprised of 16GB of 3200MHz memory running in dual channel configuration, a blazing fast 1TB NVMe M.2 SSD which gives you plenty of storage for any other games you may want to play.  It’s powered by a modest 650W Silverstone fully modular power supply which ensures that your system won’t have any unnecessary cables lying around.

View on Cyberpower
View on Amazon

If you’re aiming to be more of a professional, this build is just for you. Esports players consider running at well over 300 frames per second an absolute must in order to receive as much in-game information as quickly as possible. With that said, its very easy to overspend in this category as any competent graphics card will run Fortnite at these high framerates. But, with the following build, you can easily churn out tons of frames while saving some cash for that high refresh rate monitor you’ve been eyeing.

The Alienware Aurora R12 is a special kind of gaming beast. Its tailor-made for the type of gamer who wants to push his gaming performance to its limits. Esports players will be really happy with this sleek prebuilt due to its generous selection of high-performance components.

Starting off with the processor, the all-new Intel Core i7 11700F is the best that Team Blue has to offer right now. It packs 8 blazing fast cores and 16 threads that allow you to run Fortnite at very high framerates at 1080p; which is a notoriously CPU-intensive task.

The RTX 3060 Ti that comes with the Aurora allows you to run Fortnite (or any other games, for that matter) at the highest framerates possible without needing to compromise on anything. With that said, as an eSports player you will most likely run Fortnite at the recommended competitive settings, which will leave more graphical room for future-proofing.

The system is completed with 32GB of DDR4 memory at 3200MHz that allows the CPU to hold frames at well over 300 FPS, along with a 256GB M.2 NVMe SSD as the boot drive paired with a 1TB HDD for your games. The whole system is powered by a 550W power supply from Alienware, which is generally of good enough quality to last you a very long time. At $2100, you are definitely paying a premium, but this framerate focused gaming rig is equipped with just the right parts that make it worth every penny.

Moving up to 1440p resolutions means that you will be needing slightly beefier hardware. But don’t worry, you still can experience high fidelity Fortnite at 1440p without spending too much. Since 1440p is slowly but steadily making its way to becoming the most commonly used resolution by gamers, it would serve you well to have a solid prebuilt system that allows for a hassle-free gaming experience.

Starting at just $1499, the OMEN 25L desktop gaming PC is the perfect mix of looks and performance. It packs an Intel Core i7 10700 processors with 8 super-fast cores and 16 threads. The Nvidia RTX 2060 Super will be all you need in order to run Fortnite at high settings at 1440p while maintaining well above 60 frames per second. The rest of the components include 16GB of HyperX DDR4 memory clocked at 2666MHz running in dual channel mode, a 512GB NVMe M.2 SSD and a secondary 1TB SATA HDD. It’s powered by a 500W power supply that’s capable of easily running your system without any hiccups.

The OMEN 25L Desktop is the perfect prebuilt system for those of you who want to strike the balance between resolution and framerate.

In order to play at 1440p resolution at over 144 frames per second, you’re going to need a pretty strong gaming rig. But even then, a smart choice of a midrange processor paired with a stronger graphics card allows us to keep our prices from going overboard

Starting at $1699, iBUYPOWER returns with another killer gaming prebuilt. This time sporting a Ryzen 5 5600X processor, and a Nvidia RTX 3060 Ti; an extremely cost-efficient duo that can easily take on Fortnite at 1440p. the rest of the specs include 16GB of DDR4 3200MHz memory running in dual channel configuration and a 500GB NVMe M.2 SSD by Western Digital coupled with a 1TB HDD for mass storage. The whole system is powered by a 650 Watt 80 Gold certified power supply. Just like the earlier selection from iBUYPOWER, this gaming rig has exceptional upgradability due to its off the shelf components.

View on iBUYPOWER
View on Amazon

Our final prebuilt is for those who want the absolute best of the best, both in terms of visual quality and framerate. 4K gaming is a luxury in among the PC Masterrace, but for those who can afford it, there’s no going back.

The Alienware Aurora R10 Ryzen Edition offers best in class performance for those who only want the most elegant of gaming PCs. It packs an AMD Ryzen 7 5800X; one of the best gaming processors currently in the world, along with Nvidia’s latest and greatest RTX 3080. This elite combination allows you to play Fortnite in a way only a very few has ever gotten the chance to. The rest of the system is no slouch as well. With 16GB of fast DDR4 memory at 3200MHz, a whopping 1TB of NVMe storage, and a 1000W power supply to boot. This balling gaming system is not for mere mortals. But if you have $2669 burning a hole in your pocket, then the Aurora R10 will quite possibly be the best possible way for you to spend it.

That about sums up our roundup for the best prebuilt gaming PCs for Fortnite in 2021. With the crazy prices that PC hardware is selling for, it’s very fortunate that the prebuilt industry has not been hit as severely with the same curses.

Do keep in mind that you can always set Fortnite to the competitive performance mode graphical settings in order to get a boost on your fps on all these systems. Another method to get a sizable boost in performance for your RTX cards is by turning on DLSS, which is what we recommend that you should always do (unless you cannot bear the thought of running below native resolution).