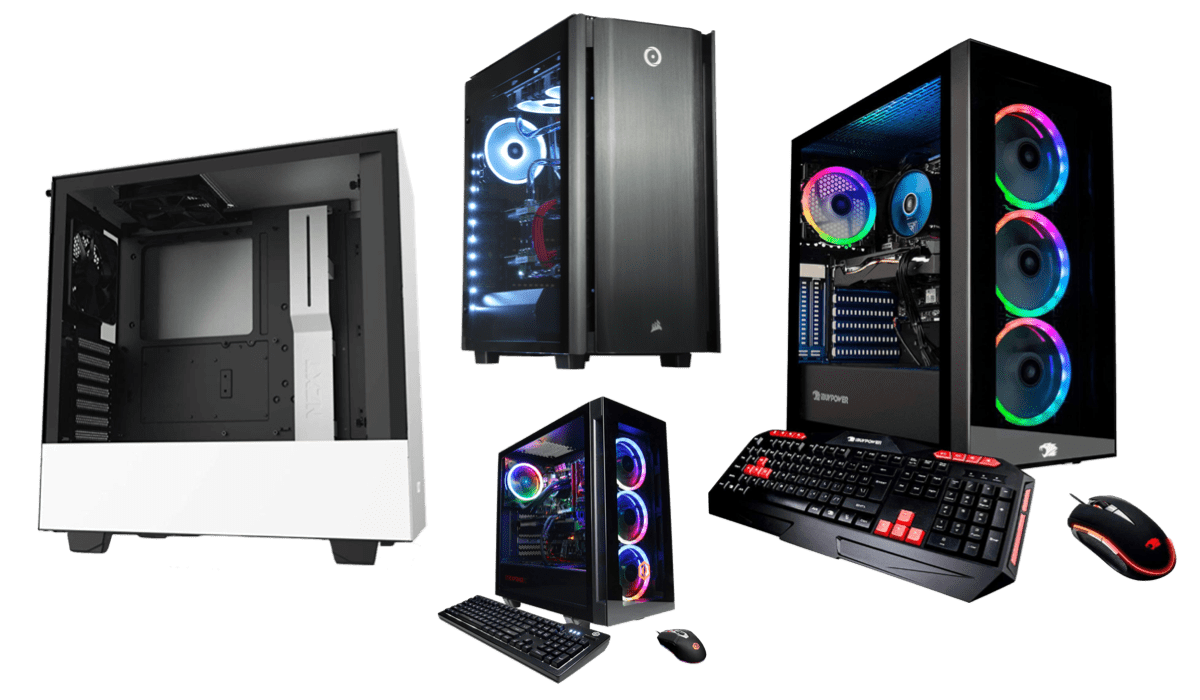 With the current focus on pre-built or custom-built PCs, including here at PremiumBuilds where we’ve written about the reasons to build yourself or to buy a prebuilt rig, many buyers are asking the first question when choosing a pre-built PC: who should I have build it?

Part of the reason you are letting a professional build your new battlestation is because you want to make sure it’s done right! You want a builder that knows exactly what he’s doing, but that still offers competitive pricing and good support in case things go wrong. Like any choice, there are advantages and disadvantages to each of the major producers. Depending on what is most important to you, we want to make sure you have a chance to choose the right builder of your next baby. There are probably hundreds of PC builders selling on places like Amazon/eBay, but we chose four of the most well-known and largest to compare. Most of them sell through their own website, but often also through retailers like Best Buy or Amazon if you prefer buying from one of them (or have a gift card from the holiday season!).

Each offers a slightly different experience, so let’s take a look at the four major pre-builders: CyberpowerPC, iBUYPOWER, ORIGIN PC, and BLD by NZXT:

We are starting with one of best known and probably largest pre-building company: CyberpowerPC. CyberpowerPC has been around for years, building first on its own and then expanding into retailers like Amazon and Best Buy. The site maintains a somewhat unwieldy configurator, but nothing too bad, that contains more options than any but the most hardcore specialist could need. We absolutely love the large selection of parts, the competitive pricing, and the rotating sales that can help save a little extra cash. Even better, despite the shortage of GPUs and CPUs that seem to have struck the DIY market, CyberpowerPC has managed to keep a decent stock level of all parts and has shipped plenty of recent systems with Ampere series GPUs, no mean feat!

We would like to see a better tech support and faster shipping, but if you are patient, the PC is well-built when it arrives. The warranty offering is adequate (1-year parts, 3 years labor) but nothing to write home about. Overall, if you enjoy doing some research and finding a great deal, CyberPowerPC offers a great selection of very customizable builds that can get very close to DIY level pricing. For an enthusiast gamer looking for a particular pre-built, that’s just about perfect.

Sometimes seen as the little brother to CyberpowerPC, iBUYPOWER is probably the second-largest prebuilder, after its ‘big bro’. Similar in many ways to CyberpowerPC, iBUYPOWER is an established custom builder that sells through its own site as well as retailers like Amazon and Best Buy and has a reputation for solidly built PCs.. The two are in many ways the same, but still have slight differences to set them apart. Where CyberPowerPC really offers the whole range of parts, iBUYPOWER seems to have a slight focus on budget and mid-tier builds, offering some very strong options in those price ranges with still plenty of customizability. Perhaps due to its slightly lower popularity, shipping times are faster than its main competitor, which is great for people looking to get their new PC as quickly as possible. On a somewhat subjective note, we also like the configurator better on the actual website, it feels easier to navigate and understand. However, this could also be in part due to the fact that there are a few less customization options.

Much like the advantages are similar, the disadvantages of iBUYPOWER are similar as well. The warranty is the same mediocre 1-year parts/3 years labor that is not particularly great, and the focus on budget/mid-tier means that the fewer high-end offerings seem to be more expensive than necessary. There are fewer rotating deals (although still some!) which can be nice in that you don’t have to check back every day, but also means there are fewer opportunities for savings for a patient buyer. Overall, iBUYPOWER is really very similar to CyberpowerPC and when choosing between the two, it should come down to who has the build you want at a better price and in stock. Once you have that information, the rest is relatively unimportant.

Our next prebuilder starts to move in the opposite direction of iBUYPOWER and CyberpowerPC. Still a well-established company with a strong reputation, Origin PC has chosen to move toward the mid-tier and higher-end offerings and away from budget builds. Origin was started by some former Alienware employees in 2009, so this focus on higher-end shouldn’t be a surprise considering the market segment Alienware focused on. This means that some of their more expensive builds can be very interesting, but if you are looking to spend under $1000, one of the first two is likely a better choice. Origin has also gone for a more curated strategy, offering few configurations and rotating deals in favor of strong archetypes for each build format (SFF, ATX, mATX, laptops, etc.). Within those archetypes are some custom options, but not to the extent of CyberpowerPC or iBUYPOWER. We also appreciate the lifetime tech support, which tends to be a bit better than some of the other competitors.

Origin is an interesting company because of this mix of higher-end focus and more curated builds. For someone that wants a powerful PC and has an idea of what that means, but isn’t interested in doing research on hundreds of parts to find the perfect combination, Origin has a lot going for it. The more directed approach is sometimes nice, especially since one of the main reasons many buyers choose a prebuilt is to save themselves from doing all the legwork. Unlike some of the other builders, Origin also focuses on selling through its own site, so don’t try and find any of their builds on Amazon for example. If you are ok giving up on the rotating deals/sales and don’t need to customize every part of a budget build, Origin PC is a great place to look next.

At the opposite end of the spectrum from our first two builders and even further along the curated strategy than Origin PC is our fourth building company, BLD. And actually, BLD is actually more than just a building company, they are the prebuilt arm of the components producer NZXT, which is best known for its cases like the H510 or coolers like the Kraken x63 (common choices for custom builders). As you can imagine, this comes with a few advantages and disadvantages. The main advantages to BLD are the backing of a major company like NZXT, which means the customer service and tech support is top notch, and they are backed by a longer 2-year warranty than other builders. We also really like that the first step to a BLD machine is a questionnaire that helps both you and BLD understand exactly what you’re looking for. This is a nice first step, especially for newer PC owners that are looking for some help. The builds themselves are slightly on the pricey side, but they are very high quality and also well-designed with a nice BLD/NZXT aesthetic.

The biggest disadvantage is probably not a surprise to anyone: BLD locks you into certain NZXT parts, like the cases. The customization options are just not there as BLD only sells NZXT components in certain categories. For someone that was already looking at an NZXT case for example, this isn’t necessarily a bad thing. But for someone that wanted a bit more choice, that can be a dealbreaker. So, if you are already interested in NZXT components or don’t mind using them, and you want a guided prebuild that focuses on quality and customer service, going through BLD by NZXT is definitely a viable option.

As with any decision, an absolute is hard to give (we aren’t Sith after all!). And while these four prebuilders and custom PC sellers are amongst the biggest, there are plenty of other companies that provide a similar service and might have interesting deals from time to time. But if you have decided that going with a custom-built PC or prebuilt is your choice for your next machine, this advantages and disadvantages comparison should help you pick the prebuilder that fits your needs and gets you the next premium build of your dreams.

Looking to build a PC? View our top PC builds for 2021

If you are looking to do a build, why not check out our fully-vetted, recommended build guides for 2020? We have a range of builds to choose from – depending on budget, form factor, function or specific component-orientated builds!