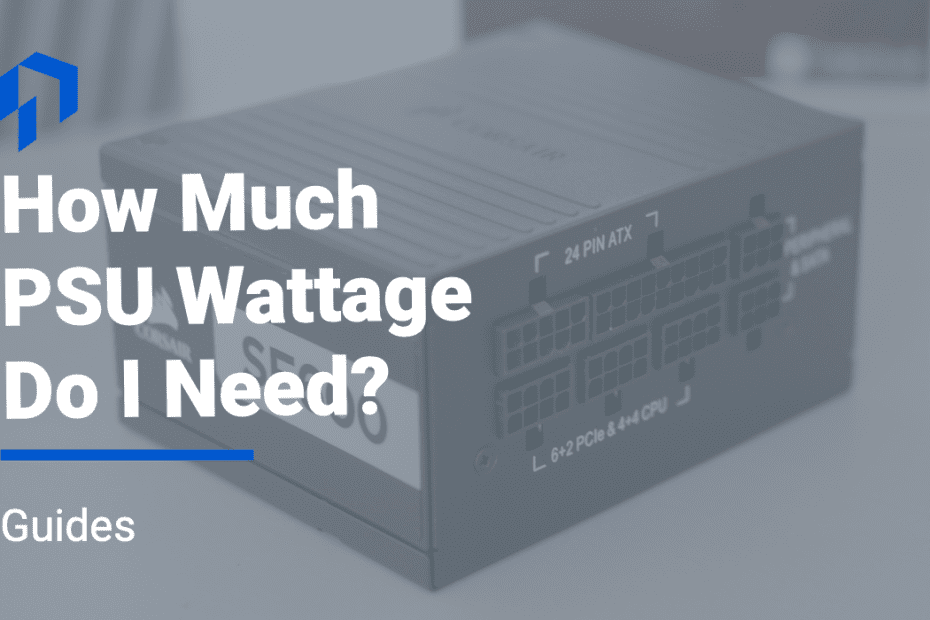 One of the most prominent specifications of a Power supply is its ‘wattage’, normally quoted as 500W, 600W and so on. Calculating how much wattage you need vs how much the power supply can provide can become a headache. This article will help you work out the best option for your PC build.

How much power can a Power Supply (PSU) deliver?

When components, particularly power-hungry GPUs, experience a demanding workload they draw a significant amount of power for a very short period of time. This power demand has to be met by the power supply – and this normally occurs by drawing power from capacitors in the power supply which exist to smooth power delivery and supply these transient spikes in power. This is where lower quality power supplies often fail to deliver: they use cheaper, lower quality and lower capacity capacitors. They may also have ‘over current protection’ set at lower limits to protect a less robust design or to keep within limits of parts with a lower specification. If you demand too much of these power supplies, they will shut the system down to protect themselves. If you encounter a situation where your PC shuts down when loading a game, or after an extended period when things have heated up, the power supply is a likely culprit. This is why GPU manufacturers tend to ‘over quote’ recommended power supply wattages, to account for there is no guarantee of the quality of the power supply the end-user has in their system.

Working out how much power your system can draw

The power your PC draws depends on the components you choose. The most power-hungry components are the GPU(s), the CPU and then items like the Chipset itself, RAM, SSDs or Hard drives, and fans and any water pumps themselves also consume in the order of 10 Watts maximum each. Inefficiencies are inherent in all components causing energy to be wasted as heat, but these are accounted for in the total power draw given for any component.

Components come with a nominal power draw, which can be equated to ‘TDP’. This is a less than perfect analogy because it’s really about the thermal design of the components, and also because the manufacturers sometimes misrepresent the actual power draw of components to appear more efficient.

Allowing a 200W buffer gives you enough headroom to add multiple drives, more complex cooling solutions, or a more powerful CPU or GPU in future upgrades without having to replace the power supply as well. More powerful PSUs also tend to offer more PCIe and CPU power connectors, allowing you to run devices that require those connectors – two separate runs from power supply to the GPU for example, or an additional 4pin CPU EPS power connector to support CPU overclocking.

If you intend on Overclocking the CPU or GPU you will want to calculate significant headroom and consider the peak power draw of your components when overclocked, and this can be significantly higher than those run at standard settings – as much as double in some instances. High-end cooling solutions can also demand more power than a more basic PC set-up.

A rule of thumb to calculate your Power Supply needs:

You can find the maximum power draw by searching for reputable reviews that indicate peak power draw during testing. As a rule, GPUs tend to closely follow their TDP power limits unless overclocked, and so do AMD CPUs. Intel CPUs frequently misrepresent their TDP and have a significantly higher peak power draw under demanding loads, so it’s wise to look at tests that demonstrate actual power use. Whilst an i9-10900K is nominally a 125W CPU for example, it can draw over 220W under all-core load and more when overclocked. An intel i5-11400 has a ‘TDP’ or 65W but will draw just over 100W under a demanding all core load.