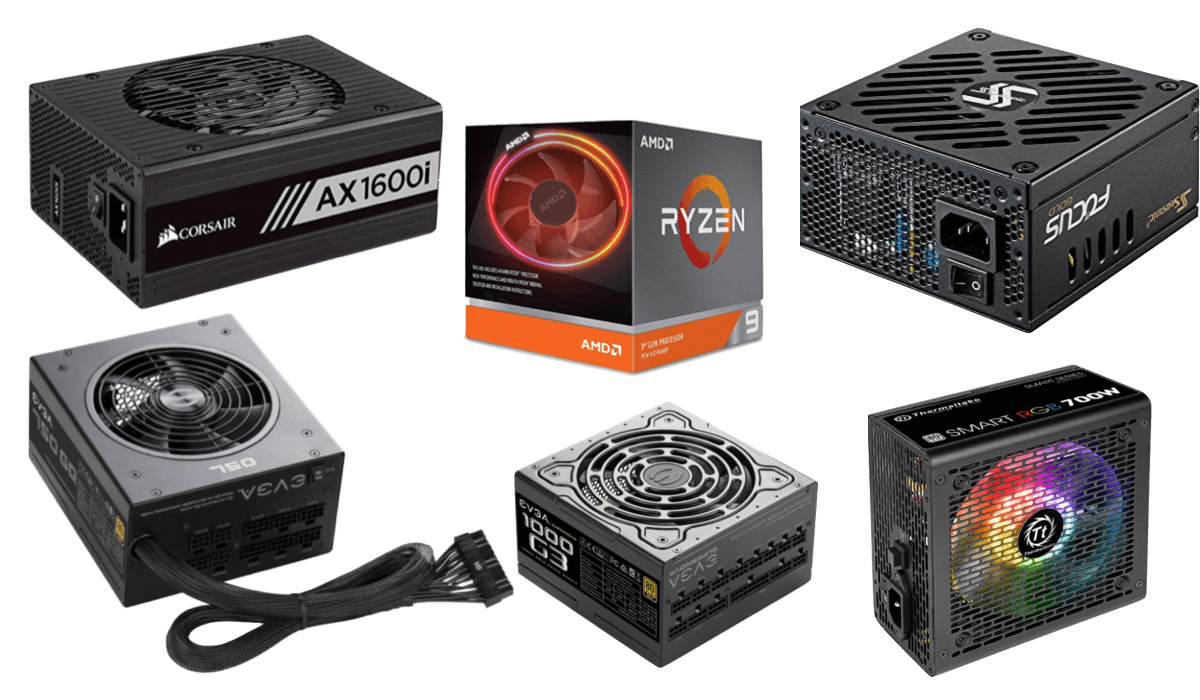 With 12 cores and 24 threads, a turbo clocking speed of 4.6 gigahertz, and a competitive retail price range of $499, the Ryzen 9 3900X is a processor worthy of its praise, and a must-buy for any mid-to-high end PC setup. But if the processor is the “brains” of your device-to-be, the power supply (PSU) is definitely its “heart”. And in order to be able to pump the right amount of wattage to all of your hardware adequately, you are going to need a PSU that can not only supply the right amount of power, but also operate at a high power-efficiency level, maintain a low noise exposure, and last the wear and tear of the years of usage to come.

Now the Ryzen 9 3900X has a TDP (Thermal Design Power) of only 105 Watts, which may seem quite low, but there are many other components to factor in when it comes to choosing the proper PSU. From SSD storage, the motherboard, the GPU, and any overclocking features of the CPU and GPU, there are considerable power demands that must be taken into account when it comes to choosing the correct wattage values for your new setup. Keep in mind that not all power supplies can deliver their rated wattage, as most of the power load falls onto the 12V rail, where the rated wattage may be considerably less. Not having enough supply to power these units can result in random lock-ups, system reboots, or even start-up inability.

This article will show you the best, most cost-effective, and compatible PSUs to pair the Ryzen 9 3900X processor for five distinct set-ups. Hence, no matter how you go about building your computer, this article will help guide you to make the best choice for your future PSU.

Naturally, when building a gaming computer, you want to allocate most of your budget on a killer CPU and GPU, and many times the power supply is wrongfully neglected. That is why first on the list we have a low-cost PSU that can still cover the high-power demands of a modern-day gaming computer.

The Thermaltake Smart 700 PSU is a great entry-level power supply that can run most PC builds with ease.  A Ryzen 9 3900X paired with an Nvidia RTX 2070 Super, 32GB of RAM, and 1TB SSD, all mounted on an ATX motherboard, would require around 500 Watts of power, so with the 700 watts that the PSU offers, you will have enough leeway to overclock your system without having to worry about the power supply’s output being inadequate. The Thermaltake Smart 700 is also designed for low volumes, meaning that it runs relatively silent, without that low-frequency hum that can be quite annoying when trying to listen for audio-clues in a game.  This PSU comes with an 80 Plus Standard rating, meaning an 80% efficiency.

Given the fact that you’re going to be making a gaming PC, you may also want that added pizazz of RGB lighting that the Thermaltake Smart 700 includes, all at a price range of $70. With such a low-price range and an added 5-year warranty, this is an amazing budget PSU for your gaming setup.

If you are looking to do a bit more than just gaming with your new Ryzen 9 3900X, like for example: stream, edit videos, or utilize other demanding programs, the EVGA 750 GQ is surely your choice. With 750 watts of power, you can pair your CPU with an Nvidia RTX 2080 Ti, 64 GBs of Ram, 4TB of SSD storage, and an ATX Motherboard, all while still being within range of your power supply’s maximum wattage output.

With an 80 PLUS Gold rating, the EVGA 750GQ has an efficiency of 91.16% at a 50% load and an 87.52% efficiency at a 100% load (!) – making it an extremely efficient build. Also important is the fact that the EVGA 750 GQ is almost completely silent. Like the Thermaltake Smart, this PSU is also designed for low volumes; meaning that the dull, monotonous, droning sound that comes from lower-quality PSU’s is pretty much non-existent from the EVGA 750 GQ – and its built-in fan does not spin unless necessary, making the overall noise emanating from the hardware negligible. Another great aspect of this PSU is its fully-modular nature.

As of the writing of this article, you can find the EVGA 750 GQ for $150, together with its 5-year warranty, making it the most power-efficient PSU for your money; a worthy pairing for the Ryzen 9 3900X, and your ideal new setup.

Now you may be in the market for a spatially smaller device to plug your Ryzen 9 3900X in, and this way minimize your computer’s volume and footprint. You may want to build a mini-ITX, small form factor (SFF) gaming PC, or even a home theater PC (HTPC). If that’s the case, then the Seasonic Focus SGX-650 PSU is the perfect fit for an overall high quality-and-performance system that can run high-end graphics with a silent and efficient PSU.

So, depending on your needs, you will want to maximize every ounce of processing, and overclocking, power the Ryzen 9 3900X gives you. Be it you’re building a machine based on function, or you just want that sweet satisfaction of owning an overpowered beast of a computer, the stakes will be higher for your power supply and you are going to need an equivalent high-end PSU. For that case, what better than opting for the Corsair AX 1600i 80 Plus Titanium.

256 GB of RAM? Over 6 TB of SSD Storage? How about an SLI of two Nvidia RTX 2080 Ti’s? Well, this beast can handle it all. With 1600 watts of available power the Corsair AX 1600i will be able to supply power even to the most demanding of home PCs. And this power comes with the highest 80 Plus rating: Titanium – meaning you are getting over 90-96% efficiency at any given moment, with incredibly stable voltages and ultra-low ripple noise, no matter what percentage of a load it has to handle.

It comes with a patented FDB 140mm cooling fan which includes a zero RPM mode, for a near silent experience at under 50% loads. It also has Corsair’s LINK software compatibility, meaning that you can monitor and adjust the power supply unit’s settings directly from the screen of your device. Finally, of course, it is a fully modular unit. You can own the Corsair AX 1600i for $430, including a 10 year, hassle-free, warranty.

Let’s say you don’t want to go too extravagant, but you want to take full advantage of your Ryzen 9 3900X CPU and keep it for as many years as you possible can before upgrading it. That means that you may still want to upgrade your GPU, your RAM, and of course your storage’s memory. SSD storage space does take a significant toll on your available power-supply wattage. Each terabyte of SSD space will take up nearly 80 watts of additional power, and a high-end GPU can take up to 300 or more watts. If you are looking to have the ability to crossfire (use two-to-four GPUs simultaneously) then you will definitely want to plan ahead and have the required wattage from your power supply to sustain your Ryzen 9 3900X well into the future.

For such a case, the EVGA SuperNOVA 220 G3 1000X1 power supply is perfect for you. With 1000 watts of power, an 80 Plus Gold rating, a fully modular design, and a ten-year warranty, the EVGO SuperNOVA 220 G3 is an all around, high quality, efficient, and powerful choice for a build that can last well into the future. Featuring a hydraulic-dynamic 130mm bearing fan, it guarantees a quiet PSU operation and longer lifespan both for the fan and unit itself.  The 1000 wattage gives you plenty of leeway to add extra RAM, SSD storage, or even a second GPU to your device, without the fear of overloading your PSU. It even comes in a smaller and more compact 150 mm size, so you don’t have to worry about cluttering your case.

For $180, the EVGA SuperNOVA 220 G3 is a great deal, even if it costs $30 more than the EVGA 750 GQ (the best current overall PSU for a gaming PC mentioned earlier) it is arguably worth the extra dollars to future proof your PC, so that you can upgrade it at will without the worry of having to replace your PSU. If you like to plan ahead, the EVGA SuperNOVA 220 G3 1000X1 is definitely your match and can be beautifully paired with your Ryzen 9 3900X so you can enjoy it for many years to come.