80 Plus Gold vs Platinum PSUs: What are The Differences? 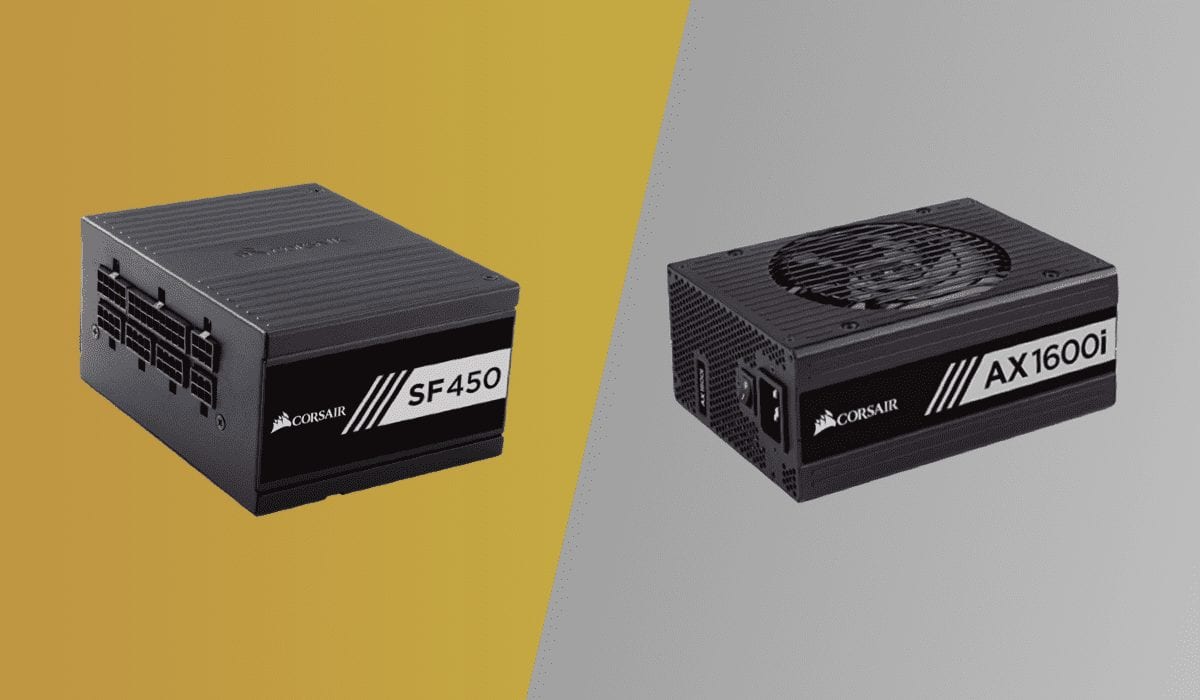 With the launch of Intel’s 10th generation ‘Comet Lake‘ CPUs, as well as AMD’s new Ryzen 3000XT and Ryzen 3000 WX Threadripper Pro series processors, now is one of the best times to build a brand-new PC. But if the CPU is the “brain” of your setup, the PSU is its “heart”, and in order to ensure that it will sufficiently pump the proper amount of electrical power to your hardware components there are certain factors that need to be taken into account.

One of the more important aspects pertains to the wattage output of the PSU. Each PC hardware component will have a TDP (thermal design power), which is a measure of the wattage that the unit will demand. Most CPUs will have a TDP of 65-125 W, going as high as 280 W for higher-end Threadripper CPUs. Every other component will also have thermal demands, from the SSD, the GPU, and the motherboard. Therefore, the required wattage will depend on the hardware composition of the PC.

Other than the wattage, other factors for choosing a PSU include: its noise emissions, the size of the PSU (whether it be for a full tower to a small form factor PC), and perhaps even its external appearance – like whether or not it has an RGB light display. However, the most important aspect is the PSU’s energy efficiency, and this is where the 80 Plus rating becomes a factor.

80 Plus is a certification program made to promote efficient energy use, certifying PSUs that have an efficiency of 80% and above, at 20%, 50%, and 100% loads. This means that of the energy that is input into the PSU, at least 80% of it will be output and transferred to the hardware, while the rest will be converted to heat. There are four specific categories for this specification, but for commercial desktops only two are relevant: the 115V and the 230V EU internal power supplies. Depending on the efficiency percentage above 80%, there are additional certifications a manufacturer can attain. These are: 80 Plus Bronze, Silver, Gold, Platinum, and Titanium. The Titanium rated PSUs are more so intended for PCs that work around the clock, like servers or high-power workstations, and not as much for most home desktop setups. Additionally, anything below a Gold rating will end up costing more in the long run, due to the accumulated loss of energy and the resulting higher monthly electric bills. Of course, it is always worth investing in a proper PSU, since it can continue to be of use even after any subsequent upgrades to the hardware.

The answer to the question above ultimately depends on the intended use of your build, as well as the actual model of the PSU, for if most of the power-load falls onto the 12V rail, and the 12V rail doesn’t output the same amount of wattage as the unit is certified to output, then both the efficiency rating and the listed output will be of little value. Additionally, to attain the 80 Plus certification the PSUs are tested at room temperature, and since any resulting heat from the PC hardware that effects the PSU can considerably diminish its efficiency, we must also take into account the space and cooling conditions of where it will be housed.

In order to help you choose the right PSU and 80 Plus certification for your needs, we will list the best ratings for different setups, as well as a recommended PSU model for each task.

With the ever-growing technological advancements, small form factor builds can nowadays be used for anything: from workstations to gaming, to even home theatre PCs (HTPC). To optimize each recommendation, each unit will be suggested depending on these three main categories of operation.

For a HTPC, the Gold rating will surely suffice, for the tasks of such a build are far less hardware intensive. Hence, for HTPCs we recommend the Corsair SF450 Gold, which is perhaps the best SFX PSU for a majority of mini-ITX builds. This PSU is fully modular, meaning that all its cables are detachable, has 100% all Japanese premium 105-degree C capacitors, and features a zero RPM fan mode – which translates to near-silent operation on low to medium loads. You can find the Corsair SF450 Gold for $124 currently.

For gaming and desktop use, the proper rating will depend on the amount of daily use the PC will operate at. If you intend to use the PC for several hours daily, then a Platinum rated option is recommended. This is due to the fact that SFF PCs have limited space, and therefore heat can quickly become an issue. The more the temperature of the PSU rises, the less efficient it becomes, and therefore having an 80 Plus Gold rated PSU in an SFF case can quickly turn itself into to a Silver or even Bronze rating and below, despite using some of the best cooling available. Though slightly more expensive, with a $172 price tag, Corsair’s SF450 Platinum is a great option that is definitely worth the extra cost for high-performance SFF builds. Like the aforementioned SF450 Gold, this PSU is also fully modular, has all Japanese 105-degree capacitors, and has a zero RPM fan mode. Additionally, all of the cables are sleeved with a flexible paracord for easier routing and cable management.

If you plan on using your SFF PC for a few hours a day, or for a few days a week, then the Corsair SF450 Gold will suffice for your needs.

Note: The 450W PSUs mentioned will work for the majority of SFF builds, though, for higher power demands, 600W and 750W variants of both Corsair models do exist.

Once again, whether the Gold or Platinum rating will best suit your needs depends on your intended use. If your build focuses around less demanding, online multiplayer games which are usually played at 60 FPS and 1080p resolutions, then a Gold rating PSU will suit your needs just fine.

A great such unit is EVGA’s 750 G3 which is designed for low volumes, is almost completely silent at low to medium loads, and is fully modular. The EVGA 750 G3 also has high-quality Japanese brand capacitors and a five-year manufacturer’s warranty. Currently, you can find the 750 G3 for $129, which is a great price for its efficiency and overall value.

If you are looking to make a beast of a gaming machine that can handle current generation games, or even the soon to arrive next generation of games, at high framerates and high resolutions, then you are going to need both the extra wattage, as well as the higher efficiency rating. Purchasing a PSU with a high wattage means that the load it operates under will be lower, which is optimal in terms of efficiency for PSUs to run at around 50% loads. In addition, it also means that you will have leeway to add more components (like extra storage or even a second GPU) without having to worry if your PSU can handle the extra power demand.

To fill these needs, we recommend the Thermaltake Toughpower iRGB 1200W Platinum PSU. This PSU has it all: from a massive 1200W of output, 12 addressable RGB LEDs with seven different lighting options, high-quality Japanese capacitors, a fully modular design, and tons of software that allow you to control the PSUs RGB lighting effects, its fan, and even optimize power management; all manageable through your smartphone. Though this PSU normally sells for $319, you can currently find it for a reduced $255, together with an impressive 10-year warranty.

For most workstations, a Platinum-rated PSU is pretty much a no-brainer, since workstations are built to operate under high load for upwards of eight hours per day. Lest we forget, they are also meant to turn a profit, so their cost of operation should be as low as possible. For such cases, it is always best to purchase a PSU with a higher wattage than what may be needed, so it doesn’t operate at or near 100% too often.

An excellent Platinum certified PSU is the EVGA Supernova 1600 P2. This PSU can output 1600W at a 92-94% efficiency and comes fully modular, with a single +12V rail. Once again it also makes use of all Japanese capacitors for better reliability, and it features a larger, 140mm, fan with double ball-bearings. Together with its 10-year warranty, you can currently find this PSU for $479.

If you want to go a step beyond, and invest in the best PSU possible for your high-end workstation, then there is an option that exceeds the 80 Plus Platinum certification: The Corsair AX 1600i 80 Plus Titanium.

With a Titanium level certification, expect over 90% efficiency even at 10% loads, going up to 96% for 230V Eu internal non-redundant 50% loads. This unit is fully modular, with 100% Japanese capacitors, an MTBF (mean time between failure) of 100,000 hours of operation, and features a 140mm fluid dynamic bearing cooling fan that does not operate at low to medium loads for more silent operation. In addition, Corsair’s AX 1600i is the only consumer PSU to feature gallium nitride transistors, which it uses to maintain its Titanium grade efficiency in its smaller form factor. This PSU also uses Corsair LINK software, which allows you to monitor and control your PSU’s power settings directly from your PC monitor. The Corsair AX 1600i currently sells for $549 and includes a 10-year warranty.