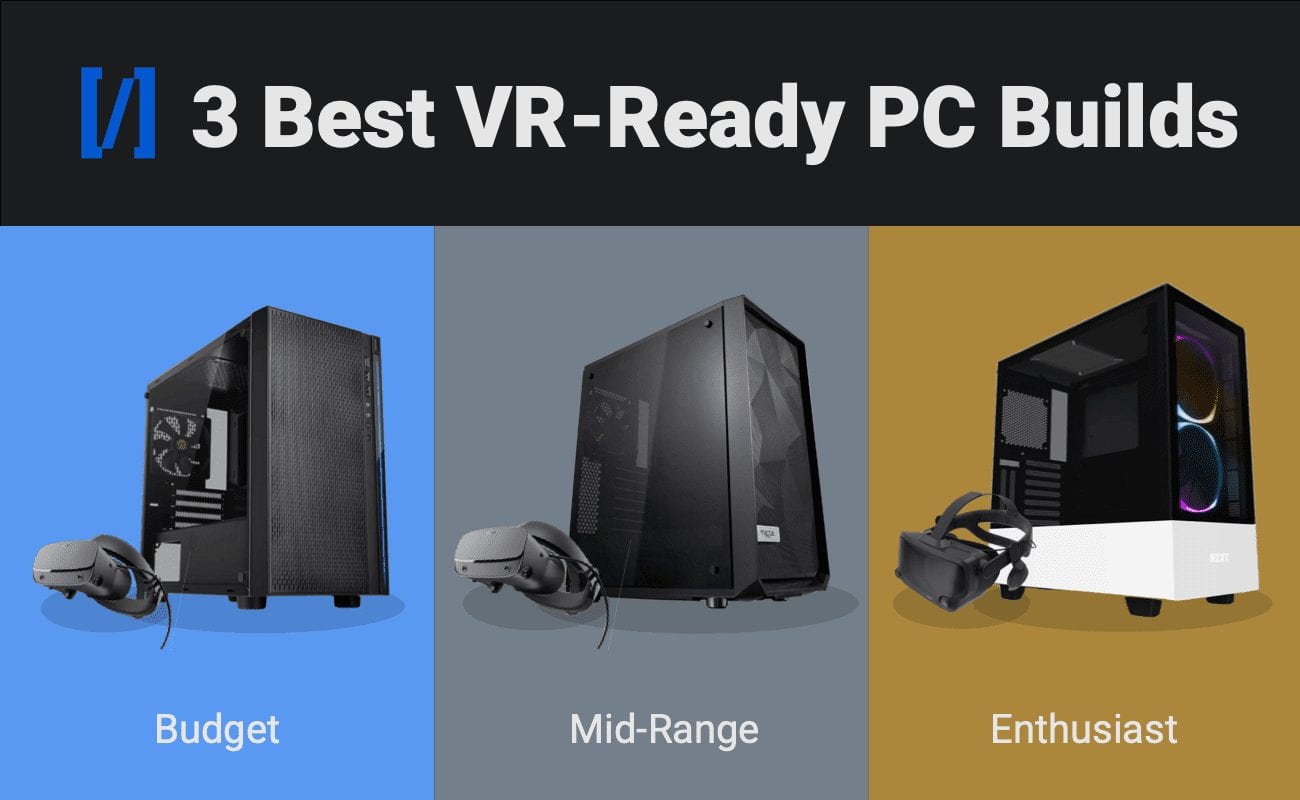 Virtual Reality (VR) has come of age in 2020 and now is a great time to build a VR capable rig. With immersive titles like Half-Life: Alyx, sims with full VR support such as Project Cars II and DCS World and a host of innovative ways to use the immersion of VR there’s a wealth of software to experience. GPU’s have finally become powerful enough to render smooth detailed scenes at a frame rate and resolution that maintains immersion and good quality headsets have become affordable.

In this article, I’ll explain what features make for the best VR experience and recommend entry-level, mid-range and high-end VR gaming rigs to suit any need or budget in 2020.

VR Builds: What to prioritise.

A gaming build capable of VR isn’t hugely different from any other gaming PC. It requires adequate CPU power and RAM for a smooth consistent gameplay experience but the main area to focus on is the GPU: to generate an immersive VR world the GPU must render each frame twice from different viewpoints, one for each eye. Immersion requires smooth consistent frame rates.

Because of these demands, a VR gaming PC should have a higher tier GPU than normally considered adequate for monitor-based gaming. In terms of the PC itself, this is the only additional spend to ensure great VR performance.

The other major expense is, of course, the headset itself. The Oculus Rift S represents an excellent entry point to VR gaming at around $300, whilst the Valve Index is a $1000 cutting edge headset that boasts very high resolution and refresh rate. You can read our VR headset roundup here.

This build represents a fantastic entry point for VR gaming with a comparatively powerful GPU, very capable CPU and adequate supporting hardware. It’ll game well at 1080p alongside demonstrating that experiencing VR in the home needn’t break the bank! With good headsets starting at around $300 you should be able to obtain this set up for under $1000 all in.

The newly announced Ryzen 3300X is an excellent entry-level gaming CPU. Whilst it has 4 cores multithreading helps pick up the slack in any games that require more CPU threads. Benchmarking shows it performing admirably and it’s on a par with the more expensive Ryzen 5 3600 in almost all titles. Using the supplied cooler helps keep costs down.

The MSI B450 Pro M-2 MAX is an entry-level B450 motherboard but it’s Ryzen 3000 compatible and offers good basic functionality. There are 4 USB 3.2 Gen 1 ports and an additional 2 USB 3 ports. There’s a spare PCIe 1x slot to add a wifi card if you require it but this motherboard will have no problem extracting the maximum potential out of the CPU.

Given the 2 memory slot capacity of the motherboard, it makes sense to start out with 16Gb Ram which is adequate for almost all current games. This Aegis 2x8GB stick kit from G.skill, and is clocked at 3000mhz.

3600mhz is generally considered optimal but performance gains aren’t going to be apparent in games where the GPU is the limiting factor so we’ve opted for the lower clock speed and $20 savings here.

A budget 500Gb SSD from PNY, the CS900, gives us plenty of space to get started and costs just $55. It’s DRAM-less which isn’t optimal but it’s still far faster than any Hard Disc. If you have some extra to spend a 1TB Crucial P1 SSD would be a fine upgrade over this at around $100, or else pair this drive with a 2Tb HDD if you need more space.

The GPU is the key to VR performance and we consider a GTX 1660 Super the start point to a consistent and enjoyable VR experience. This GPU has the Displayport output required to run a VR headset such as the Oculus Rift S and benefits from a dual-fan design for quieter operation. The AIB model of the 1660 Super we have opted for is the highly-regarded ASUS TUF Gaming OC.

The Thermaltake H18 is a good budget offering with decent airflow and looks at the price point. With a sleek black design that is certainly non-intrusive, a tempered glass side panel and ergonomic cable management make this micro-ATX case a great bargain at just $55.

We’ve stuck with Thermaltake SMART M for the 650W Bronze certified PSU for this budget VR-ready build. Case and PSU availability and pricing have been pretty chaotic in recent months due to trade wars and then the Covid-19 pandemic so it pays to be on the lookout for bargains.

In the mid-range territory, a budget of $1200 for the tower gives you a very strong VR gaming PC – thanks to the value and competitiveness of AMD’s CPU and GPU advances over the last year.

At the mid-price point for our VR build, we decided to opt for the much-lauded Ryzen 5 3600 CPU. This 6 core 12 thread CPU redefined what we expected from mid-range CPU’s when it launched. The Zen 2 7nm architecture achieves high clock speeds whilst keeping power consumption and temperatures low, boosting performance. This CPU performs more than adequately across a wide range of titles.

The MSI B450 Tomahawk Max has been the go-to recommendation for Ryzen 3000 series CPUs and with good reason. It has strong voltage delivery circuitry and a host of features such as USB-C on the rear panel, and BIOS flashback making updates possible even without a compatible CPU. If you’re looking to utilise PCIe 4.0, it may be worth looking at the newly announced B550 motherboards.

G.Skill offers their Ripjaws V RAM at 16GB 3600Mhz with tight CL16 timings for a reasonable $84 – the optimum RAM speed and latency for Ryzen builds. This ram allows a 1:1 timing ratio between the RAM and the ‘infinity fabric’ memory controller in the Ryzen 5 3600 lowering memory access latency and optimising performance. At the price, it’s a good way of ensuring you’re getting the most out of your Zen 2 CPU for virtual reality.

1Tb of SSD storage comes courtesy of the Crucial P1 M.2 NVME drive. At $115 it’s a great all-round NVMe SSD drive and well suited to gaming, workloads and running your OS. It is QLC nand which is slower than the more expensive TLC NAND but the controller masks performance deficits well in day to day use. We consider this drive an excellent choice for a VR gaming machine giving a lot of fast storage at a very reasonable price.

At the mid-range, the AMD Radeon RX 5700XT makes a compelling case. 8gb VRAM and very high performance combines with great pricing at $400. Sapphire is a well-respected brand and their Pulse model of the 5700XT hits the sweet spot of price, performance and cooling. Whilst initially there was concern over AMD’s drivers these have been well and truly addressed through driver updates now that this GPU is nearly a year on the market so you can buy it confident that it will provide an awesome gaming performance in VR and even driving a 1440p monitor if you choose to.

The Fractal Design Meshify C ATX case represents a great choice at $105. It includes a PSU shroud, tempered glass side panel and a mesh front panel for great airflow to help keep the 5700XT cool. It includes magnetic dust filters throughout and provides a pleasant building experience with integrated cable routing and good build quality.

The power supply is again a Cooler Master unit but we opted for the gold-rated MWE Gold 650W PSU on this occasion. It’s fully modular for a clean build and ships with a 5-year warranty.

Ready for the most demanding VR titles for $2000

The Ryzen 7 3700X brings huge power to this build. The 8 cores with simultaneous multithreading ensure a consistent experience in even the most demanding titles whilst also excelling in productivity and workstation tasks for demanding users. Whilst higher core count AMD CPUs are on offer and may make sense for power users the 3700X hits the sweet spot of value and will remain capable for years to come.

We’ve opted to pair it with the NZXT Kraken X53 240mm AIO cooler. This unit fits perfectly with the case for a hassle-free build and has ample cooler capacity for the relatively efficient CPU.

Asus’s TUF line of motherboards adds features and aesthetics without the very high cost of their ROG Strix X570 motherboard line up. The TUF Gaming X570 is Ryzen 3000 compatible and offers native Pcie 4.0 support, strong voltage delivery circuity and inbuilt Wifi and Bluetooth. It also has gigabit LAN and USB 3.2 Type-C support on both the rear panel and via an internal header for the Case USB-C port. This is a fully-featured motherboard that will support expansion in the future, but delivers excellent performance now.

This build boasts a two-tier storage set up. The Adata SX8200 Pro gives 1Tb of exceptionally fast and durable NVME storage for the Operating System and key programmes. The additional 2Tb SATA SSD from Crucial’s MX500 line up is plenty fast enough for game and data storage. Whilst the motherboard supports PCI-e 4.0, the price premium for compatible NVME SSD’s isn’t justified for anything less than full workstation builds – so we’ve kept prices down but maintained performance here.

Finally, the GPU which is the cornerstone of this enthusiast VR-ready build. Whilst it’s always tempting to opt for the highest-end card spending over $1000 on an RTX 2080 Ti isn’t necessary for a truly high-end VR experience. Instead, we’ve let our head overrule our heart and chosen the $700 RTX 2080 Super.

For our high end build we’ve opted for the clean lines and integrated RGB of the NZXT H510 Elite. This recently refreshed case features USB C on the front panel, RGB fans and lighting strips and a straight forwards build with the compatible and matching NZXT cooler we’ve selected.

Powering the system is the Cooler Master MWE Gold 650W PSU due to it’s attractive pricing when other PSUs have risen in price or disappeared from the shelves.

I hope that this article has demonstrated that VR is now well within reach for those considering a new build in 2020 and given you some inspiration to go hunting for your own Premium VR build!

If you have any questions or want any feedback on your upcoming VR-ready PC build, feel free to get in touch with us here and we will do our best to help out!