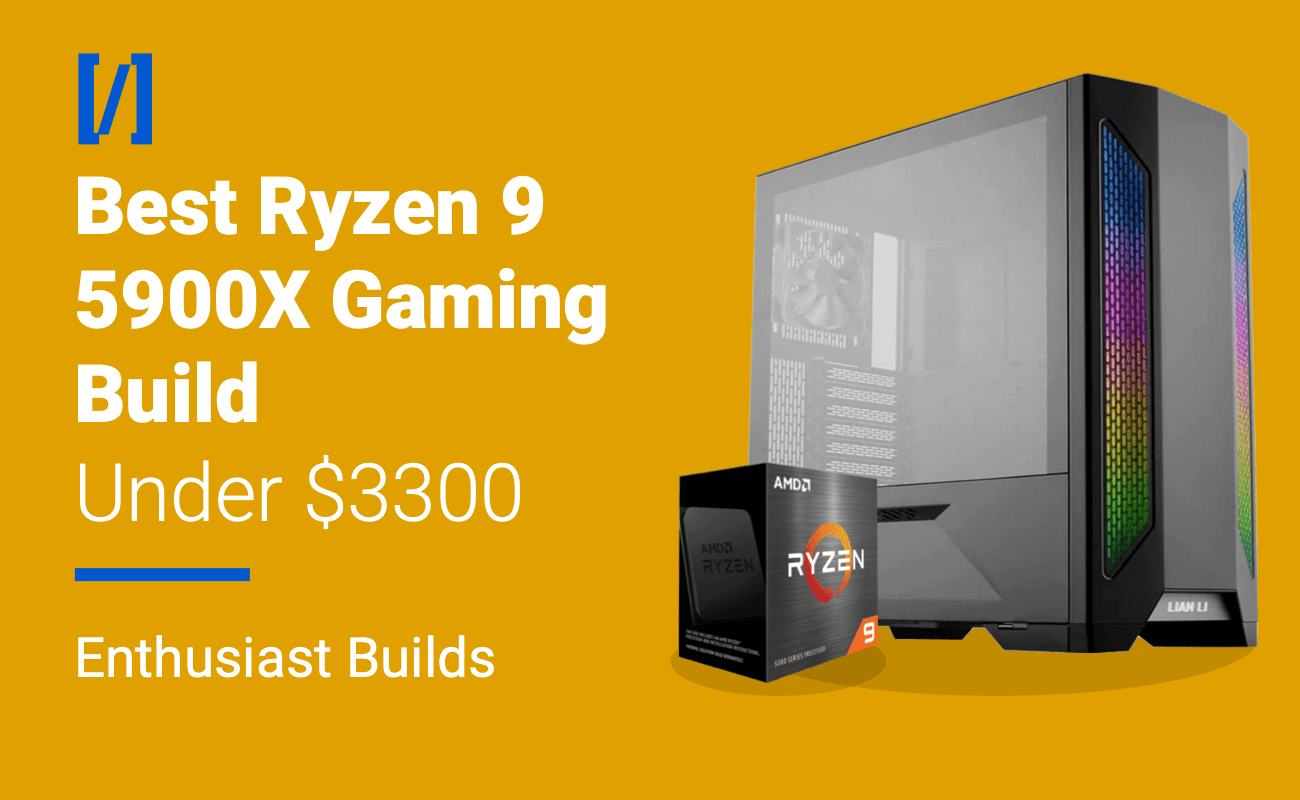 AMD’s initial Zen 3 lineup has finally been revealed, and it may very well have the new gaming CPU champion among its ranks! The Ryzen 9 5900X is shaping up to be a serious contender for gaming enthusiasts and users in need of some powerful productivity performance. Across the board, Zen 3 processors enjoy the benefits of AMD’s new architecture and unified L3 cache and core complexes (CCXs). These two changes allow for boost clocks up to 4.9GHz, and up to eight cores to share simultaneous access to 32MB of L3 cache within a single CCX.

Translation: Zen 3 brings a 19% boost in instructions per clock (IPC) and, according to AMD, a 26% performance uplift over Zen 2, all while remaining at or below the TDP of Zen 2. Even if you’ve recently procured yourself a Zen 2 processor, Zen 3 offers compelling upgrades to what could be the best CPUs on the market for quite some time. Furthermore, if Zen 3 is capable of even slightly more overclocking than Zen 2, Intel may have a rough time even trying to compete in gaming performance, which they’ve been clinging to for so long.

The fact of the matter is that AMD has had Intel’s feet to the fire for nearly two years, and it’s only been getting hotter. Thanks to Team Red, there has never been a better time to upgrade your current system or build a brand new one. While we may not yet have an idea of what’s in store for their upcoming Big Navi Radeon GPUs, Zen 3 is a safe bet to make while we await new technologies like DDR5 memory, Quantum Dot displays, and a process from Intel smaller than 14nm 😊.

Today’s crown jewel: The Ryzen 9 5900X. Poised to sit atop most gaming benchmarks with its older brother, the 5950X, the $550 5900X is likely the more sensible option for the majority of builders to still crush performance in multiplayer arenas as well as in scrubbing through chunky timelines. With 12 cores, 24 threads, a 105W TDP, a 4.8GHz boost clock, and the improvements offered by AMD’s Zen 3 architecture, the 5900X earns its slight price uptick in our book.

Zen 3 will be the last series of processors to drop into the AM4 socket (barring any refreshes), so if you’re looking to make the most of your build and avoid upgrades for the next several years, it might be wisest for you to save up and spring for a Ryzen 9. Worst case scenario, AMD refreshes the 5000 series sometime next year, and your build ends up a half step down from the top! You’ll still have a beastly processor with incredibly tame thermal performance. Unless Intel can work some genuine technological wizardry, there’s not likely to be much competition in the CPU market from the elderly 14nm process.

Again, here’s to AMD and their ability to keep TDPs very much inline despite the beefy performance uplift with Zen 3. With such a relatively low 105W power draw expected from the 5900X, most users’ best bet will be air cooling, and when it comes to air cooling, there are few better options than Noctua. Today we’ll be recommending the Noctua NH-U12A, a nifty little heat sink that’s capable of competing with the monstrous NH-D15 dual-tower unit within a few degrees while also ending up a few decibels quieter.

With two of their specialized NF-A12x25 Sterrox© bladed fans, seven heatpipes, and a compact fin stack with an impressive amount of surface area, the NH-U12A has the cooling capabilities of even most 240mm AIOs in a 140mm single-tower. Unless you’re dead set on liquid cooling, there are very few other air or liquid coolers that can compete with the thermal and noise performance on top of this level of hardware compatibility. You shouldn’t have trouble fitting this beauty in nearly any compact, mid-sized, or full-sized ATX PC enclosure.

Now, if we’re still talking regal headwear, the MSI MEG X570 Unify is the crown that holds your 5900X gem. At this stage, the X570 Unify is one of the most tried and true AM4 motherboards released to date. While you might see some new entries from companies like Asus with the new ROG Crosshair DARK HERO and STRIX B550-XE, the X570 chipset is going to be the best home for your new Zen 3 CPU. Updates and refreshes are always welcome, but that doesn’t suddenly deprecate the long-standing benchmarks for build quality and performance, which the X570 Unify most certainly is.

The MSI X570 Unify boasts 60A Power Stages, a 15 Phase VRM (12+2+1), support for up to 128GB of DDR4-5000MHz memory, 3x M.2 slots, Intel AX200 Wi-Fi 6 + Bluetooth 5.0, Realtek 2.5G LAN + ALC1220 Audio CODEC, 4x USB 3.2 Gen 2 (1 is Type-C) + 2x USB 3.2 Gen 1 + 2x USB 2.0 ports, 4x SATA III 6Gb/s ports, an integrated I/O shield, Clear CMOS + BIOS Flashback buttons, onboard Power/Reset buttons, and a POST code readout for $300. For the most part, there’s not too much reason to look outside of the X570 Unify for mid to high-end Ryzen builds nowadays. MSI essentially created the perfect AM4 motherboard at damn near the perfect price. While it may not exactly be cheap, you’re buying one of the sleekest and most well-rounded options on the market with extremely competitive VRM performance and stellar component/build quality. (Plus, it’s a nice change of pace to have an option without the superfluous RGB lighting that’s all too common nowadays 😊).

For our system memory, we have chosen a G.Skill 32GB (2x16GB) DDR4-3600MHz CL16 kit, which should be available for about $145. Not the bleeding edge of memory performance, but as Jon discovered in the PremiumBuilds Test Lab™ for Zen 2 memory performance, there is a point of diminishing returns. Thus, 32GB of 3600MHz DDR4 allows us speeds that are plenty fast enough for gaming, with enough capacity for serious multi-tasking in addition to some relatively hefty productivity workloads. Whether you’re gaming with dozens of browser tabs and other programs open on your second display, or if you end up needing to do a bit of photo/video editing, 32GB in a 2x16GB kit gives you room to breathe and the opportunity to upgrade in the future should you so choose.

The end is nigh for spinning drives in gaming machines, folks, especially if the next generation consoles are any sort of barometer for the future. Game developers are beginning to actually take advantage of storage transfer speeds for things like streaming game assets directly from the drive. In fact, consoles might even perform tasks like that better than PCs for a while, thanks to some proprietary hardware that’s been developed to facilitate such operations. Regardless, you’re going to want to consider not only investing in SSDs for most of your storage (especially for games) but also setting aside some money for PCIe 4.0 SSDs as they continue to mature and come down in price.

That said, we’ve chosen two storage devices for today’s build: a 1TB Samsung 970 EVO Plus M.2 SSD for your OS and favorite games/programs and a 2TB Samsung 860 EVO 2.5” SSD for your bulk library storage. There’s not much to say when it comes to SSDs; there are many fantastic options, but the most fantastic tend to come from Samsung. Programs, and especially games, seem to be getting bigger and bigger, so not only do you want the fastest storage devices possible, but you want as much space as you can get for a reasonable price. Thankfully, SSDs have long since fallen from their astronomical highs a few years ago and only start to get ridiculously priced past 2TB or with PCIe 4.0 support. However, if you’re concerned about price, or perhaps just don’t need quite so much space, consider dropping the additional 2.5” SSD and investing that money in a stack of premium case fans or some new peripherals!

Consider this the halo above your aforementioned crown, the EVGA RTX 3080 FTW3 Ultra Gaming. (IMPORTANT NOTE: We strongly recommend holding out on purchasing any 3000 Series RTX cards for the moment. There’s a good chance that Nvidia is planning to release updated 3070s and 3080s with double the total VRAM to compete with AMD’s upcoming Big Navi Radeon cards).

The 3080, despite Nvidia’s slightly troubled launch thus far, is a truly magnificent specimen, and the EVGA 3080 FTW3 Ultra Gaming pushes it to the bleeding edge. Where the reference TDP for an RTX 3080 is a mindblowing 350W, the EVGA FTW3 can easily hit 420W (😊) with enough metal and fan speed to spare. EVGA has done a phenomenal job in taming this particular power-hungry beast and has undoubtedly crafted one of the most competitive third party overclocking cards to date. If ever you were considering gaming at 4K but held off due to concerns of performance? The one-two punch of a 5900X and RTX 3080 should properly dash any last reservations and will scream through any gaming benchmarks you can throw at it. If you plan to game at less than 4K? Forget about it; you’ll be stomping on 2080 Ti performances all day, and at a massive discount. Just a final reminder, do your best to hold off until Nvidia confirms they’ll be releasing an updated version with 20GB of VRAM!

Next, we’ll look at the bones of your new beautiful beast: the Lian Li LANCOOL II-X ATX Mid-tower. Lian Li has been responsible for some great enclosures over the years, and the LANCOOL II-X is no exception. Simple, clean, a tasteful amount of RGB, and the premium build quality and materials many of you might be familiar with.

The Lancool II has hinged tempered glass side panels, cable shroud panels to hide your nest on the underside of your motherboard tray, a shrouded PSU and hard drive basement, well-thought-out cable management throughout, not to mention excellent ventilation and a reasonable amount of RGB lighting for the front panel. If you’ve been struggling to pick out your next case, or maybe you’ve grown just a little weary of my incessant Fractal Design recommendations, then the Lian Li LANCOOL II-X is an outstanding choice.

To wrap things up for our 5900X build, the PSU: the EVGA SuperNOVA G3 850W 80+ Gold. Your power supply is the most crucial component of your computer, and we’re just now starting to come out on the other side of severe availability issues due to recent global events. Prices are beginning to normalize, and the more reliable picks are becoming more readily available.

Enter the SuperNOVA G3 850W. EVGA has earned its reputation for more than just GPUs, with many of their power supplies being the affordable go-to choices thanks to their excellent build quality, performance, and warranty/customer service that’s second to none. For clean and stable power and stable power where you need it most, EVGA is always an excellent option!

Zen 3 has raised the bar for consumer electronics relatively high from the looks of AMD’s initial lineup. With so many new technologies on the horizon, we can’t help but reiterate that there won’t be a better time to upgrade your machine or build a new one after Zen 3 finally launches this winter. Today’s build should get you pretty close to the cream of the crop for a reasonable sum and leave you plenty of breathing room to upgrade down the road. Are you planning on buying a Zen 3 CPU? Are you excited to see what kind of performance you can squeeze out of the new RTX cards? As always, be sure to let us know your thoughts in the comments down below, and thanks for reading!