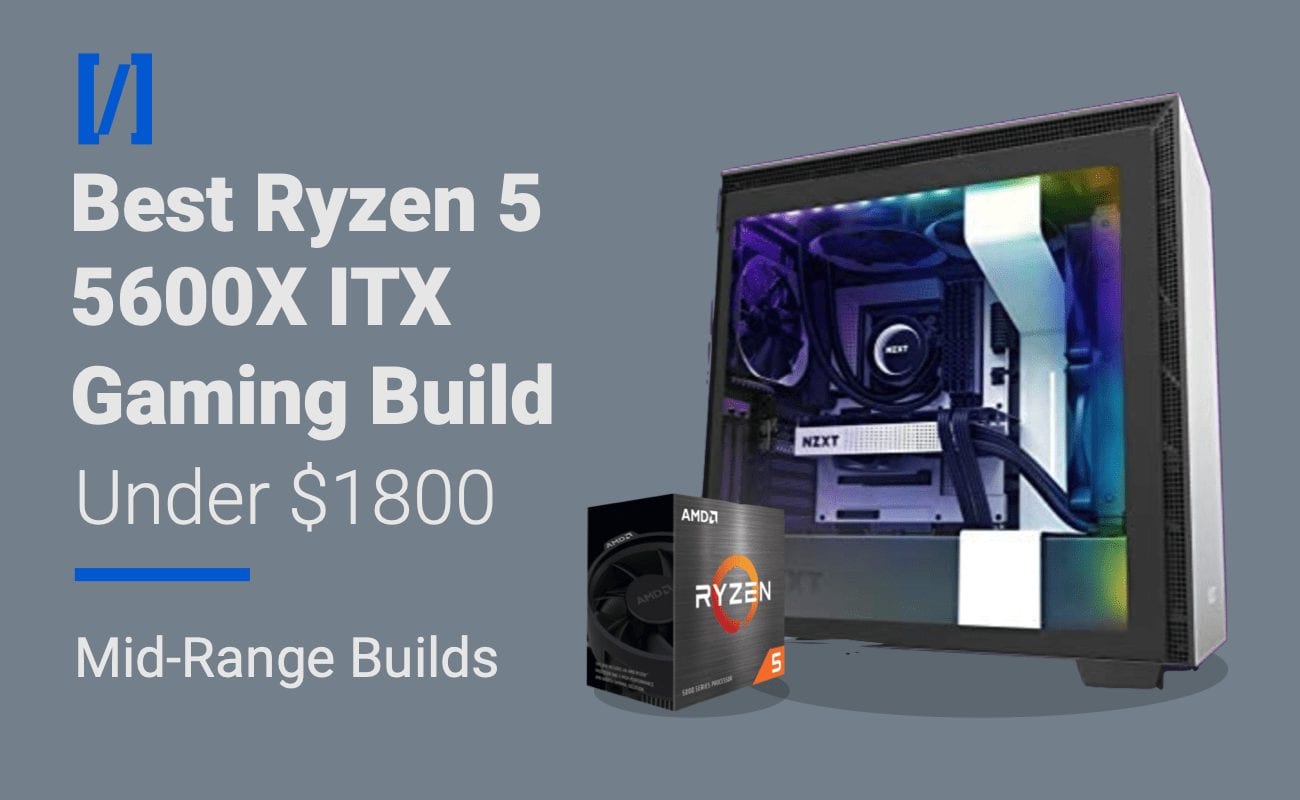 Fans of ITX systems should be chomping at the bit to either build or upgrade their machines because both AMD and Nvidia are soon to deliver options that all but guarantee incredible gaming performance in relatively small packages!

First, AMD’s upcoming Ryzen 5 5600X is shaping up to be the go-to pick for affordable PC luxury with six cores, twelve threads, a unified 32MB of L3 cache, and default turbo clock speeds up to 4.6GHz with only a 65W TDP! This insane level of efficiency is due to the generational improvements we’ve come to expect of the Zen architecture and the aforementioned unified L3 cache. Thus, up to eight CPU cores per core complex (CCX) now have direct and simultaneous access to the L3 cache. So while the 5600X enjoys one of the lowest TDPs possible for excellent FPS performance, builders with more budget to play with might be able to take advantage of up to sixteen cores, thirty-two threads, and 64MB of L3 cache with something like the Ryzen 9 5950X, and at only a 105W TDP. These new CCX capabilities mean that Zen 3 should serve as a massive upgrade, with a 20% instructions per clock (IPC) uplift, no matter what price bracket you’re in.

Next, we’re just about a week away from Nvidia’s new GeForce RTX 3070 8GB. While the 3000 Series cards aren’t the most power-efficient with TDPs starting at 220W for the 3070, only the ultra-expensive 3090 Founder’s Edition is still a triple-slot card! Both the RTX 3070 and 3080 Founder’s Editions are dual-slot GPUs that offer phenomenal performance, where the RTX 3070 is neck and neck with last generation’s FPS king, the RTX 2080Ti, for less than $500!

Anyone considering a Mini-ITX based gaming PC will soon have access to an incredible one-two punch of FPS performance that should make even some of the smallest ITX enclosures a force to be reckoned with. Today, we’ll be outlining $1800 worth of gaming gold based on these two upcoming releases to make sure you get the most for your money. Upon assembling these parts, you’ll have a machine under $2000 that will make short work of even the most recent titles at 1440p and 1080p Ultra settings and modest performance at 4K with Medium-to-High settings.

Kicking things off is the Ryzen 5 5600X. To reiterate, the 5600X sports six cores, twelve threads, a 4.6GHz default turbo clock, and 32MB of L3 cache with only a 65W TDP. Because of the new Zen 3 architecture and unified cache, the 5000 Series Ryzen CPUs offer roughly 20% higher IPC across the board, which, thanks to the higher boost clocks, should translate to some fierce competition in single-threaded performance against Intel.

The main reason the 5600X’s modest TDP is such a huge deal is the nature of ITX machines and the importance of system thermals. Airflow and good temps are at a premium in ITX builds because of how cramped things can become in such small enclosures. The more manageable a components’ thermal performance, the more viable it becomes in “shoebox” PCs, and regulating 65W is nearly effortless for even some of the more mediocre motherboard VRMs out there.

To virtually guarantee our 5600X stays ice-cold, we’ve selected the $100 Noctua NH-U12A, a single-tower air cooler that goes toe-to-toe with the likes of its bigger brother, the dual-tower NH-D15, and nearly any AIO liquid cooler less than 360mm.

The 140mm tall NH-U12A fits perfectly in our build and is capable of guaranteeing impressive temperatures thanks to its seven heatpipes, dense fin stack, and two ultra-quiet NF-A12x25 120mm fans. Some customers have referred to this as “the Rolls Royce of air coolers,” and that stands to reason given Noctua’s rich history of premium air cooling performance and excellent engineering. Unless you have to have liquid cooling in your machine, there are very few options that pack such quiet cooling in such a small package.

The mainboard for our tiny powerhouse today is the Gigabyte X570 I Aorus Pro (Wi-Fi). Despite its popularity, the ITX form factor doesn’t have a remarkably vast array of options to choose from. The battle for the best itty bitty board typically comes down to just one option from every major manufacturer, with the results usually ending too close to call an undisputed winner.

We mentioned that space is at a premium when building an ITX system, so we’ve chosen a set of Corsair Vengeance LPX 32GB (2x16GB) DDR4-3600MHz DIMMs with an 18 CAS Latency rating for $150. Mini-ITX boards are almost exclusively limited to two DIMM slots and 64GB of total memory but, even playing the latest AAA games while multi-tasking across two or more displays, 32GB of RAM is still more than enough.

Because higher capacity RAM has been consistently getting cheaper, plus the two DIMM slot restriction inherent to the ITX form factor, 32GB grants us enough headroom to have as many browser tabs and other background programs open while we game. Additionally, we’re sitting comfortably enough to do some light photo/video editing and other workstation tasks.

Everything keeps getting smaller, and thanks to solid-state drives, all of your data can now fit on something near the size of a pack of stick gum! Enter the $300 2TB Samsung 970 EVO Plus M.2 SSD. Our build is primarily for gaming, and even the most multi-faceted gamers out there should struggle to fill two terabytes with titles they actively play.

Regardless, M.2 SSDs have arguably played one of the most considerable roles in the viability of high-performance ITX PCs as higher capacities continue to get cheaper and cheaper. They’re some of the fastest storage devices available, eliminate the cable management that comes with 2.5” and 3.5” drives, and are incredibly easy to install and replace. If you have the extra money, you can populate the second M.2 slot on the X570 I Pro with another 2TB 970 EVO Plus or a 1TB version for ~$165.

The Nvidia GeForce RTX 3070 8GB Founder’s Edition; this is the peanut butter to AMD’s 5600X jelly. Perhaps it’s in anticipation of the upcoming “Big Navi” Radeon GPUs, or maybe Nvidia expected even bigger sales with the RTX 2000 series cards; either way, gamers are approaching the release of a dual-slot GPU that directly competes with the RTX 2080 Ti…for nearly a third of the cost. $470 may not exactly be cheap, but it’s a proposition that could potentially lead to a flood of new PC enthusiasts who might have been turned off by the price-to-performance of the entire RTX 2000 series. Either way, it’s excellent to see that Nvidia decided to ease up on their price gouging.

It remains to be seen just how competitive the next generation of AMD’s cards is, but the performance offered by the RTX 3070 has flat out been unattainable for many gamers for almost two years. Now many of them can heave a sigh of relief and start getting excited to begin playing their favorite games at blistering FPS in 1080p or 1440p.

Housing today’s component selection is the NZXT H210i Mini ITX Tower for $110. NZXT is known for its clean and simple case designs, excellent build quality, and good airflow, and they’ve given that treatment to this ITX tower. It may not be a small form factor (SFF) case; the H210i provides ample room for up to 2.5 slot GPUs and can even accommodate dual-tower heat sinks like the Noctua NH-D15!

Considering our 3070 Founder’s Edition is only a dual-slot card, despite its beefy 220W TDP, it should be nice and cozy with the ventilated panel between it and the power supply basement. The H210i also includes a pair of great NZXT Aer F 120mm fans, one front intake/one rear exhaust, which you can leave untouched or replace and expand upon with additional fans should you so choose. The full tempered glass side panel allows you to view your finished build in all of its glory and will let you appreciate the tasteful RGB lighting channels around two of the edges. We’ve got to give it to NZXT here; they make truly slick-looking cases.

Finally, powering our system is the EVGA SuperNOVA 650GM 80+ Gold. PSUs are still recovering from the recent global disruption (we hope you’re all continuing to stay happy and healthy!). While many are still relatively overpriced and unavailable, thankfully, this little SFX beauty is available on Amazon for less than $120!

The NZXT H210i can support a full-sized ATX power supply; however, opting for an SFX unit leaves more space beneath the ventilated panel, which separates the PSU and GPU, allowing the GPU significantly more room to breathe. At most, the total wattage for today’s build is only 500W, which means we’ve plenty of headroom leftover for overclocking (if Zen 3 actually can, to any reasonable extent compared to Zen 2) and several external device connections that require additional power. Alongside Seasonic and Corsair, EVGA is arguably one of the “Big Three” when it comes to PSUs for popularity, build quality, and performance, and they provide a seven-year warranty to back this one up. However, if you plan to get an RTX 3080 or 3090 or plan to upgrade later, consider a 750W PSU like the $185 Corsair SF 750W 80+ Platinum instead!

Compact machines keep getting more and more capable as time goes on. We can only hope that gaming performance continues to shrink until devices the size of our phones are as powerful as the chunkiest and most power-hungry Nvidia 10090 Ti Super 😊. Are you as excited to see high-end gaming performance continue to come down in price? Let us know your thoughts in the comments section below and, as always, thanks for reading!