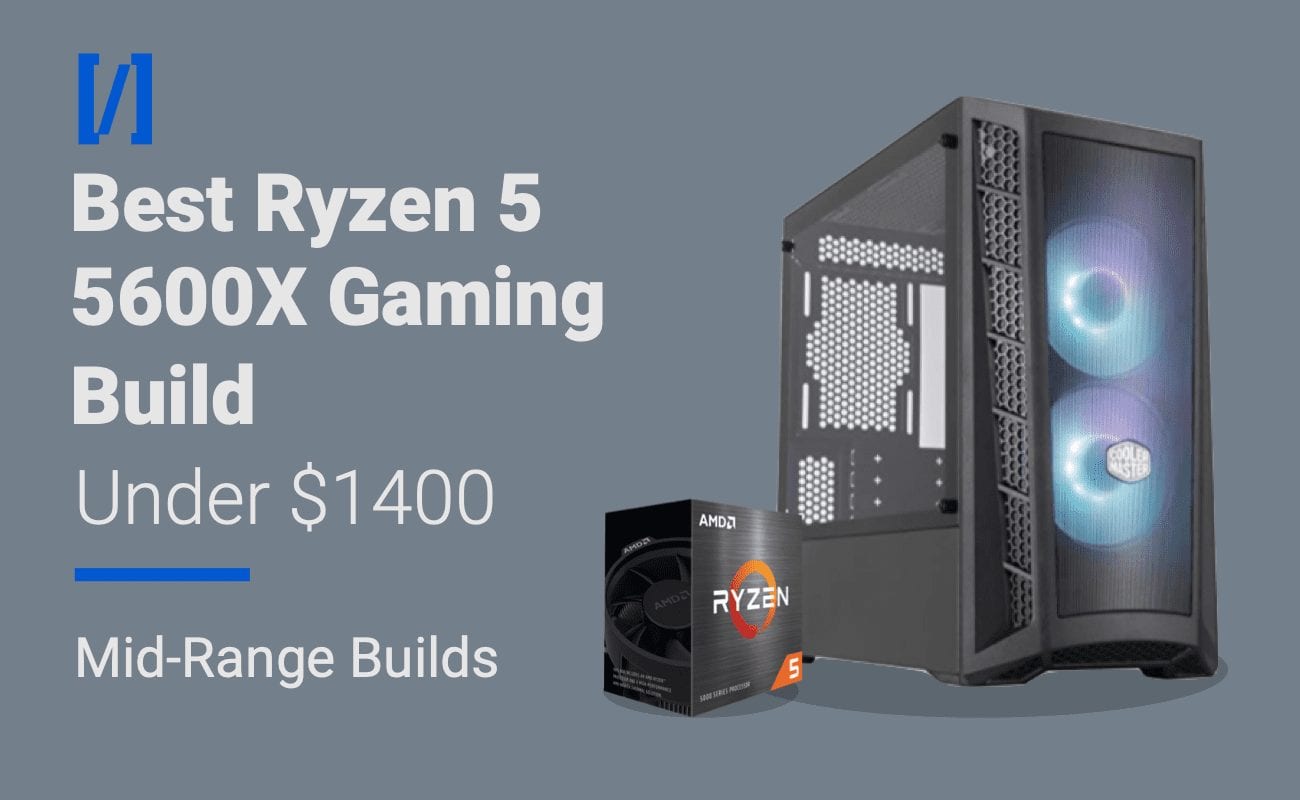 AMD’s Ryzen CPUs have come to redefine what we expect from a processor in terms of performance and value. Using higher core counts to achieve versatile CPU whilst pricing them competitively saw AMD build a strong market. They still excelled in-game though, with more than enough performance for all but the most demanding competitive players. This month AMD made a bold statement with their Zen 3 release. They’ve announced that they’re out-performing intel across the board but especially in gaming which was traditionally Intel’s strongest suit. The six core ‘Ryzen 5’ CPUs have always been the mainstay of this line of products and the 5600X looks like it will continue this trend offering top-drawer gaming performance and versatility too. In this article, we’ve built a PC that takes full advantage of this $299 high-performance processor. This PC will excel in high FPS gaming, but also has a powerful enough GPU to allow glorious AAA titles to shine at 1440p. However, the strength of the 5600X will be in its value, so the build is carefully balanced to keep performance high but costs under control. Every part represents the best value component for this class of build, so let’s dig in!

AMD claim to have made big strides with this generation of their Zen Architecture. The CPU core layout has been redesigned for better access to the cache memory on the CPU and reduced memory latency overall, as well as slightly higher clock speeds. The Ryzen 5 5600X is a 6 core 12 thread CPU with a boost clock of 4.7Ghz, 300Mhz higher than the outgoing Zen 2 parts. It still uses AMD’s ‘PBO’ technology that opportunistically raises boost levels to take advantage of thermal and power delivery headroom and maximise the potential of your chip. All of this adds up to a CPU that should exceed the capabilities of the current gaming value champion, the $279 Intel i5-10600K but at a much lower power draw. This CPU will excel in fast-paced shooters and more complex titles alike, whilst the six cores mean it’ll be perfectly capable in tasks like occasional video editing or photo processing. It supports the latest specifications such as PCIe 4.0 so you can adopt these technologies as they mature. The Ryzen 5600X is set to become the standard core of mid-range gaming systems owing to its touted performance advantage and lower platform costs over an equivalent Intel CPU.

Whilst AMD includes a stock cooler with the Ryzen 5 5600X, it’s a noisy affair and not really suited to getting the most out of the CPU. We’ve opted to include a more appropriate aftermarket cooler for the 5600X, the Cooler Master Hyper 212 Black Edition. This tower cooler uses a 120mm fan and four heat pipes to pull heat away from the 5600X with minimal noise. Lower temperatures equate to higher boost clocks and the ability to sustain them for longer, improving the performance of your CPU. With PBO on hand to take advantage of a better cooler, the $35 outlay is easily justified for both performance and quality of life via lower noise levels.

There is no motherboard revision for the Zen 3 CPUs and they will all work on B550 and X570 motherboards –although has the specification of the CPU is unreleased, if you buy prior to the CPU release you may have to flash the BIOS to gain compatibility. In terms of Value B550 is more than enough for almost all gamers. This chipset offers PCIe 4.0 support for the GPU and one NVMe SSD, along with a full suite of CPU and RAM overclocking facilities and multitudes of USB connectivity options. We’ve selected the Gigabyte AORUS B550M owing to its well-judged balance of features and pricing at just $130. It has a strong voltage delivery configuration with 10+3 phase design to ensure that the Ryzen 5600X is able to perform optimally and boost to those high clock speeds. There are two M.2 slots with the main slot offering PCie 4.0 compatibility direct to the CPU. The audio codec is a high-quality ALC 1200 chip, and gigabyte Ethernet is plenty for almost all home settings. There are 5 fan headers and a suite of 6 temperature sensors to allow you to monitor the thermal performance of your build and tweak adjustments if needed. Overall this motherboard is an excellent backbone to the system and keeps costs down with an attractive $130 price point.

Whilst we will have to wait for performance testing of RAM on Zen 3 CPUs, what we know about the design allows us to make informed decisions. The IO chip that acts as an interconnect between the CPU cores and the outside world remains unchanged, axnd it’s this that dictates the infinity fabric speeds and optimal RAM specification. Therefore it seems very likely that 3600Mhz RAM with tight CAS timings will be optimal, and given our testing it will certainly remain the price to performance sweet spot for this new processor with 3600MHz RAM being relatively affordable. We’ve chosen this Crucial Ballistix 2X8GB kit with RGB highlights for a little extra visual flair. It offers good timings and uses Micron E-die chips which are high quality and overclock well if you want to try your hand at optimising speeds and timings further. 16GB is plenty of RAM for almost every game, and there are 2 slots left free for a hassle-free upgrade should you need more RAM in future.

2020 has been a great year for SSDs and we’ve seen storage prices drop making high capacity SSDs affordable for all. There’s also been competition for performance however the benefits for gaming and general-purpose PC’s really aren’t made out. There’s minimal difference in boot or loading times and only really specialist usage cases need to consider the higher performance SSDs for tasks such as high-resolution video editing or manipulation of large files. We’ve used the Western Digital SN550 in our test bench for over 3 months now and remain impressed with its performance. This SSD offers 2400MB/s sequential read and 1950MB/s write speeds and uses 3D TLC NAND for good endurance and sustained write speeds. It lacks DRAM but doesn’t let that put you off: WD uses an SRAM cache combined with their proprietary controller to ensure performance doesn’t suffer.  It ships with a 5-year warranty and at $105 represents excellent value for money.

We’ve gone out on a limb here because this is an unreleased GPU featuring in a build for an unreleased CPU – however, we’re confident that the October 29th release of the RTX 3070 will be the best price to performance offering for a mid-range PC. Listing at around $499 the RTX 3070 has 8GB VRAM but Nvidia tout performance equalling the RTX 2080 Ti. We’ll have to wait and see exactly how that stands up to scrutiny but nevertheless, we can expect at least RTX 2080 Super class performance at a much-reduced price. This combines with Ray tracing and tensor cores to leverage AI technologies. Chief amongst these is DLSS 2.0, a super-sampling process whereby AI is used to upscale images using a library of super-high-resolution 16K renders from games. This allows for dramatically improved visuals and performance and is a game-changer in the way GPUs process in-game graphics. At $500 this GPU represents the current best in class 1440p solution, with ample power for the most demanding titles. Be warned: Demand is likely to be high and supply limited, so get in the queue early to secure yours!

We’ve opted for a slightly more compact mATX form factor for this build and chosen the excellent value Cooler Master MB311L. This case comes with 2 pre-installed 120mm Fans with RGB lighting behind the mesh front panel. The PSU shroud hides the uglier bits of the build whilst a tempered glass side panel displays the rest of the components to best effect: Your RGB Ram and the motherboard heatsinks will look great. We’ve also opted to add another 120mm fan matched to the front to act as an exhaust. Meanwhile, there’s a pair of additional front panel USB ports and the usual flexibility of a drive cage in the ‘basement’ of the case. At $60 this case is a great way to keep costs lower without reducing performance, and also keeps the size of the PC manageable being mATX mid-tower format.

The PSU market is still reeling from supply troubles in 2020, but this unit from Antec represents a great buy. With 650W output and Gold efficiency rating it’s more than up to the task of powering the efficient components in this build without overspending. It’s semi modular so you only need to use the cables essential to the build, keeping clutter to a minimum. We use this PSU in our test bench and can vouch for its capability and stability as well as quiet operation and good build quality.  It uses high quality Japanese capacitors and ships with a 7 year warranty for your peace of mind. This PSU is an excellent choice for a mid range gaming build and rounds out the components for the PC itself.

A PC of this calibre demands a monitor capable of showing its capabilities to best effect. Gigabyte has recently released the excellent G27QC at a very attractive $280. This 1440p QHD monitor has a 165Hz refresh rate and uses Freesync premium adaptive sync to eliminate screen tearing and give a smooth consistent gaming experience. 165Hz allows lighting quick reactions in first-person shooters, whilst the monitor has fast response times and low input lag so it’s crisp and responsive. The VA panel gives vibrant colours and deep blacks. This monitor is specified to excel in almost all gaming situations and take maximum advantage of the high refresh rates that this Ryzen 5600X and RTX 3070 gaming PC is capable of.

This PC uses carefully selected parts to allow the Ryzen 5600X to achieve its full potential. It will give exemplary performance across a broad range of titles for years to come. We hope you’ve found this build inspirational, and we know you’re as excited as we are about the new Zen 3 CPU’s and Ampere GPU’s on the horizon.