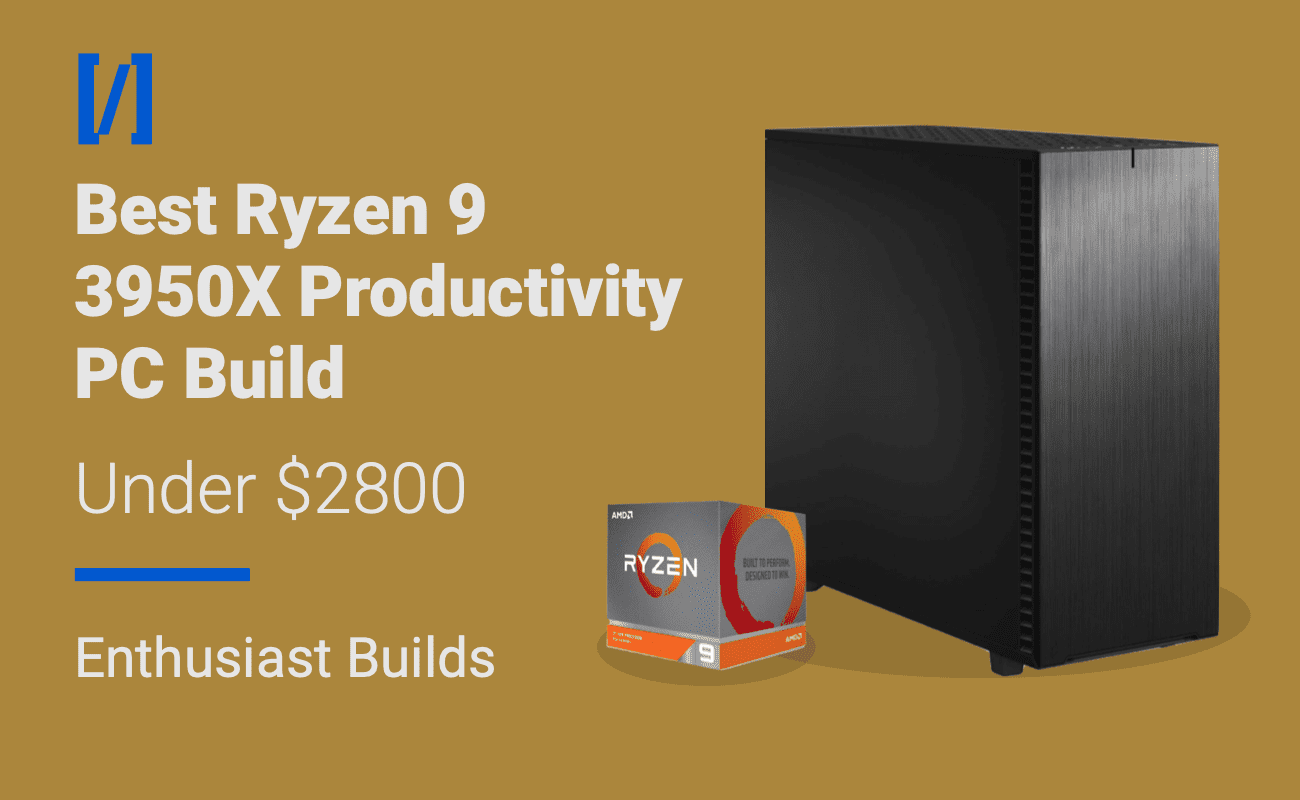 The Ryzen 3950X brought 16 core CPUs into the realm of a mainstream PC build. Prior to the Zen 2 release of these productivity focussed CPUs, you had to buy into a high end desktop or ‘HEDT’ platform to obtain similar performance. Intel’s Cascade Lake X and AMD’s ‘Threadripper’ CPUs required specialist motherboards and attracted a truly premium price if you wanted to build a high core count rendering rig. The Ryzen 3900X and 3950X changed all this, enabling massive performance on a standard X570 chipset motherboard.

There are some compromises to be made: X570 motherboards don’t boast the same number of PCIe lanes as the HEDT chipsets can offer. This means that quad GPU set ups for serious rendering or computation are still best left to much more expensive workstations. However, for everything from 4K video editing, 3D graphics production, high-end music production and editing and most other tasks you can conceive a Ryzen 3950X and a high-quality X570 chipset motherboard will have you covered.

In this article, we’ll demonstrate a Ryzen 3950X build that’s extremely powerful, versatile and easy to upgrade as your needs expand. By leveraging the Ryzen 3950X you’ll be more productive than ever with more time spent creating and much less time sat waiting. What’s more, the entire PC comes in under $3000 meaning that a professional workstation is within reach of anyone in need of a creative powerhouse.

AMDs Ryzen 9 ‘Zen’ CPUs have always been the hallmark of extreme performance but with the 3950X they outdid themselves. This CPU uses 2 separate 8 Core CPU dies (CCX’s) connected by a joint I/O and memory control chip to offer 16 physical cores. Multithreading makes this a 32 logical core CPU. The CCX’s are selected for high performance allowing a boost clock of up to 4.7Ghz. By using TSMC’s 7nm FinFET process the thermal design power for this processor is remarkably low at just 95 Watts making it easy to cool – but note that demanding all core loads can drive power consumption up towards 150W and AMD recommend liquid cooling to ensure reliable and consistent performance. For reference, it will render a 4K video in Adobe Premier under 8 minutes where an intel i9-9900K will take 11 minutes to perform the same process. To significantly better it takes an intel i9-9980XE, an 18 Core CPU that retails at $1200 on its own – and that buys you 1 minute faster rendering times. In 3D rendering in blender the Ryzen matches that intel CPU, and only a 32 core AMD Threadripper 2990WX costing $1450 beats it, reducing a 10 minute process to 9 minutes 30 seconds. Put simply: if you do work that can be meted out to multiple cores then there is no more cost effective CPU on offer at the moment than the Ryzen 9 3950X.

Whilst the 3950X is remarkably efficient long rendering sessions and heavy workloads still demand a premium cooling solution. This 360mm Radiator AIO from Fractal Design, the Celsius S36 Blackout, maximizes the surface area to dissipate heat and lower temperatures give the CPU maximum headroom to boost clockspeed and perform. Spreading the airflow across 3 fans allows them to be driven slower for less noise overall. It matches the case being from the same manufacturer making install a breeze. Mounted in the front location it doubles as the intake fan for the whole system.

The motherboard is the next key component and we’ve chosen the Asus ROG Crosshair VIII Hero. This motherboard fully utilizes the X570 chipset specification to provide exceptional input/output flexibility and expansion capability without costing the Earth.

To support the CPU it uses 16-phase 60-Amp power delivery components which are overkill even for this flagship CPU. The benefits are cool running and stable operation with extensive heatsinking ensuring temperatures are well under control even during extended computation sessions.

The board makes use of the high-end SupremeFX audio chip which offers the best sound this side of a dedicated external DAC – useful for video editing as well as music production purposes. The board has dual Ethernet connectors, with 2.5Gbe and 1Gbe respectively making high speed networking plug-and-play. The back panel boasts a host of USB ports including 4 USB 3.2 Gen 2 ports and USB C. For expansion the board offers 2 M.2 PCIe 4.0 SSD slots and 8 SATA connectors giving you a diverse range of storage options. 3 full-length PCIe 4.0 slots allow Dual GPU’s to accelerate rendering, and also support high-speed Ethernet cards, SSD expansion cards or dedicated sound cards with an additional PCIe x1 slot for smaller expansion cards.

At $350 this motherboard offers a great balance of performance and expandability.

Workstation tasks can be memory intensive so we’ve opted for 64Gb of RAM in this build with the G.Skill Ripjaws V kit. G.Skill has an excellent reputation and a good range of options for high capacity RAM kits. In this instance we’ve chosen the 3600Mhz CL18 set to optimize the RAM timings with the Infinity Fabric of the Ryzen CPU. This minor tweak in BIOS tunes the RAM, Memory controller, and Interconnect in the CPU to the same frequency which lowers latency and increases performance.

The pair of 32Gb sticks mean that even if your needs progress to the maximum 128Gb supported on this platform you only need buy an additional kit to fully populate the 4 memory slots. That said, 64Gb is sufficient for the most complex 4K video editing tasks, photographic manipulation, large 3D renders, massive music projects and much more: only data analysis with large data sets is likely to exceed this RAM capacity.

It’s difficult to specify a single solution for all usage cases when it comes to storage so we’ve recommended an excellent starting point. The ADATA SX8200 Pro NVMe SSD maximises the utility of one of the motherboards M.2 Slots.

Benchmarks show this drive performing on a par with the much more expensive offerings from Samsung but at a fraction of the price. It also has a 5-year warranty and is rated at 1280TB write capacity over that time. 2Tb capacity is ample for operating system, productivity software and several large projects. With another M.2 slot and 8 SATA 6Gb/s ports still free you can fill out the storage needs to your own requirements.

You might want to consider a RAID array of large hard discs to act as long term storage, or perhaps a host of SATA SSDs such as 2Tb Crucial MX500’s to provide fast access to working files or datasets.

The GPU is a powerful ally to the CPU in a workstation build. Many productivity programmes are able to leverage the immense computational power of modern GPU’s to accelerate processes like 3D rendering, video manipulations and encoding and CAD modelling.

Whilst there are nuances depending on the exact nature of your anticipated workloads, the RTX 2080 Super is a sound choice as a do-it-all GPU. 8Gb of VRAM is ample for most tasks. NVIDIA’s CUDA acceleration is the industry standard across a range of products and disciplines, gaining far more performance than AMD’s GPUs in similar tasks. Should you require more rendering power you can pair up RTX 2080 Supers using NVlink and in most cases, this gives a near doubling in performance – it’s a more cost-effective solution than a single RTX 2080 Ti and the motherboard and PSU in this build are ready to support it. Meanwhile, developers continue to improve processes that use tensor cores and RTX cores to extend the GPU’s capability so this GPU is well placed to take advantage of emerging software advances in future. EVGA have a reputation for excellent build quality and customer support bringing you peace of mind.

If you’re building a CAD workstation you may want to look at Nvidia QUADRO RTX cards. This is particularly relevant if you need certification in AutoCAD or you believe that the models you are working with will exceed 8Gb VRAM use (which means they’re exceptionally complex). For a CAD workstation, the Quadro RTX 4000 is a direct 8Gb GPU replacement at $870. In some highly demanding 3D rendering scenarios you may find the Nvidia RTX Titan GPU with 24Gb VRAM necessary– however, the $2500 price tag means you’ll want to be very sure of your requirements before making the investment.

We’ve selected the Fractal Design Define 7 XL Dark case due to its exceptional build quality and wide range of configuration options – which will support a high-performance workstation as it evolves over time. This case has ample cooling configurations and is directly compatible with the Fractal Design 360mm radiator which we’d recommend installing in the front intake position. There is a discreet and professional brushed aluminium aesthetic and good sound suppression characteristics to ensure that it is as unobtrusive as possible. A complete set of dust filters minimise cleaning and maintenance for a system designed to operate all day, every day.

Finally, we move to the power supply which is the backbone of this 3950X productivity build. The Seasonic Focus Plus Platinum is a very high-performance power supply rated at 92% efficiency at 50% system load. 850W will run the CPU and GPU combination with ease and has enough headroom to power a second GPU if required. The PSU has a high-quality fan but can operate fanless-ly in low load situations for minimal acoustic signature. Seasonic supports it with a confidence-inspiring 10-year warranty.

Conclusion: A powerful workstation for $3000

We’ve demonstrated how you can maximize the incredible power of AMD’s 16 Core Ryzen 3950X in a versatile workstation build. Just a couple of years ago a PC of this specification would have cost double but advances in CPU, SSD and GPU technology have coincided to allow gifted creators unrivalled power in a home or small office PC.