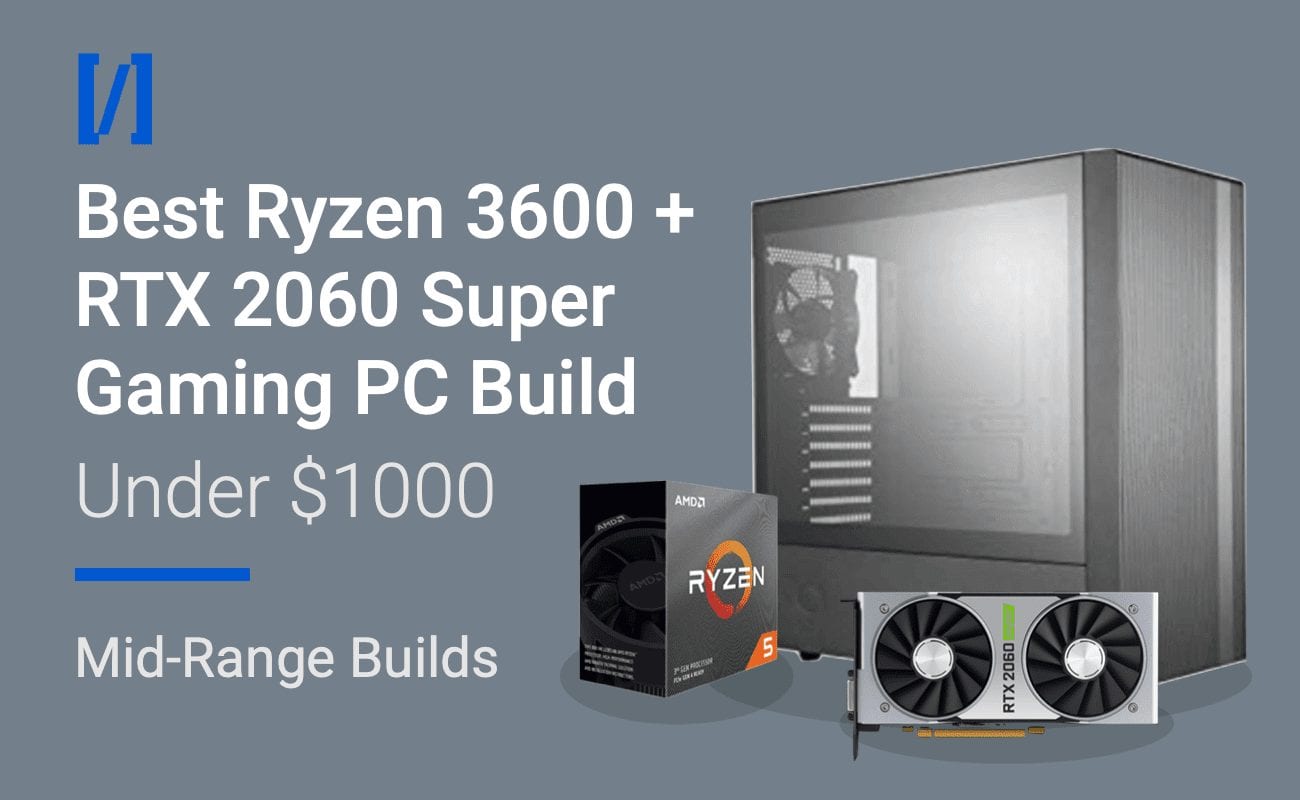 With the recent releases of AMD’s new Zen 2 lineup, AMD’s new Navi graphics cards, and Nvidia’s new Super graphics cards, now is as a good a time as any to build a new PC. We previously recommended both the Ryzen 5 3600(X) and the Nvidia RTX 2060 Super. This guide will center a value-oriented build around these two components, providing you with some recommendations if you’re not sure where to start or overwhelmed at the plethora of options you have to choose from. This build will include core components only and leave decisions regarding peripherals (keyboard, mouse, monitor, etc.) up to the reader.

As mentioned in the title, this guide centers around AMD’s new Ryzen 5 3600 offering. This 6 core, 12 thread CPU is a price-to-performance beast. In this value build, we’ve opted for the non-X SKU to cut the price down as much as possible – long story short, the 25% price hike for the 3600X over the 3600 isn’t worth the single-digit performance gains you would see – HardwareUnboxed did a great video on this that can be watched here. See our article comparing Intel’s i5-9600K and the 3600X for more specifics on this processor.

Falling right in line with good value is the use of Wraith Stealth Box Cooler that comes included with the Ryzen 5 3600. Sure, it won’t be the quietest cooler out there, and you might have to upgrade if you’re really looking to max out an overclock on the 3600, but for value purposes it will do just fine

The MSI B450 Tomahawk fits right into this value-oriented build as it has been held in high regard as one of the best bang-for-your-buck AM4 motherboards. A big factor here is the presence of the BIOS Flashback feature, which allows the user to flash the BIOS without a CPU, memory, or GPU. This is a big advantage when pairing a B450 motherboard with the Ryzen 5 3600, as older BIOS versions may not recognize the newly released CPU. In addition to BIOS Flashback, this motherboard offers other notable features including (but definitely not limited to) a healthy I/O, above average VRM components and extended heatsinks for overclocking and customizable RGB lighting.

Note: There have been widespread complaints with MSI’s new BIOS versions and the Ryzen 3000 series. Based on the massive praise MSI’s B450 lineup has received as well as the current lack of availability of their most recommended boards (B450 Tomahawk and Gaming Pro Carbon AC), it’s safe to say that a lot of MSI B450 motherboards are populating the PC building space at the moment. This makes it difficult to determine whether the high frequency of reported issues with MSI B450 boards and the Ryzen 3000 series is because MSI’s support for the 3000 series is objectively worse than other motherboard manufacturers or just because there are more MSI B450 boards being used for the 3000 series compared to B450s from other manufacturers. With that on the table, there are a few options. First, you can stick with the Tomahawk and choose to accept the risk that you may encounter issues. Second, you could wait for MSI’s upcoming B450 MAX motherboards. These B450 MAX versions come with out-of-the-box support for the Ryzen 3000 series as well as 256 Mb BIOS chips compared to the existing 128 Mb BIOS chips on a majority of MSI B450 boards. You can read more about the upcoming MAX motherboards here. Lastly, you can choose to go with a different manufacturer. The downside of this is that you lose the BIOS flashback feature, requiring you to update the BIOS using a previous generation Ryzen CPU or taking the board to your local computer store or retailer.

DDR4-3000 was considered the price to performance sweet spot for Zen+, and while AMD recommends DDR4-3600 for optimum performance when paired with Zen 2, it does come with a bit of price jump. This specific GeIL EVO POTENZA kit was the cheapest DDR4-3000 2×8 GB kit on PCPartPicker at the time of writing.

My philosophy regarding storage is that you can always add more down the road. Along with memory, storage is one of the easiest upgrades to make. That said, trying to keep budget as tight as possible, it’s my opinion that you should dump all the initial budget for storage into the largest, most reliable SSD you can find. Sure, you could opt for a smaller 120 or 240 GB SSD and pair it with a larger mechanical drive, but what happens when your smaller SSD fills up? Games are getting larger and larger these days, and 120-240 GB fills up quicker than you may realize.

500 GB SSDs are a decent size and provide good value. Yes, there are cheaper 500 GB SSDs out there in comparison to the MX500, but your data isn’t something you should play around with. The Crucial MX500 is a top-tier SATA SSD, performing essentially the same as Samsung’s top of the line 860 EVO for cheaper.

Other points to note are the choice of the SATA protocol over NVMe, and the M.2 form factor. NVMe SSDs are more expensive than their SATA counterparts. This is because they boast faster read and write speeds, but unless you’re looking to do some professional video editing or similar workloads that require frequent movement of large files on a daily basis, NVMe speeds often aren’t noticeable, and therefore aren’t worth spending money on. The M.2-2280 form factor is about the size of a stick of gum, and slots directly into an M.2 slot on your motherboard. This saves you the hassle of dealing with SATA power and data cables to the drive, making cable management easier.

Again, as mentioned in the title, this centers around the selection of Nvidia’s new RTX 2060 Super. Typically, Nvidia’s Founders Edition is cheapest following a recent release, but the EVGA SC ULTRA model can be found for the same price, which makes it a no-brainer. See our article about the best graphics cards to pair with the 3600 for more specifics on the RTX 2060 Super.

When it comes to the case, aesthetics plays a major role. The case is the first component of your PC that you see, and it is important to take personal preference into account. However, aesthetics isn’t the only thing to take into consideration. Factors such as airflow, cable management options, and hardware support are all important aspects to keep in mind. My recommendation would be the Cooler Master MasterBox NR600 (without optical disc drive).

The NR600 embraces a minimalistic aesthetic that is quite popular these days (evidenced by the popularity of NZXT’s S340 and H500 lines). While the H500 is a great case, I feel the NR600 has a leg up on it due to the full mesh front which allows for better system airflow. GamersNexus gave the NR600 an excellent review which you can read or watch here and here respectively. It’s worth mentioning that GamersNexus recommends purchasing a 120mm fan to add to the two that come stock to really start taking advantage of the cooling potential the NR600 has to offer.

Never cheap out on the power supply. This is advice you hear thrown around PC-building resources all the time. The power supply (aptly named) supplies power to all your components. If you choose to gamble on a cheap, obscure brand model, you could end up with dead components and money wasted or even something worse, like a house fire for example.

Personally, when I’m choosing power supplies, I only look at what I refer to as “the big three” manufacturers: Corsair, EVGA, and SeaSonic. They all have some models that aren’t as good, but in general their power supplies are well reviewed. SeaSonic’s FOCUS Plus line is extremely highly regarded, and this particular 550W 80+ Gold Fully Modular model received a stellar 9.8/10 from the PSU Gurus over at jonnyguru.com. You can find their review here.

What do you think of our suggested build? Feel free to share your new Ryzen 3000 builds and your thoughts in the comments section down below!