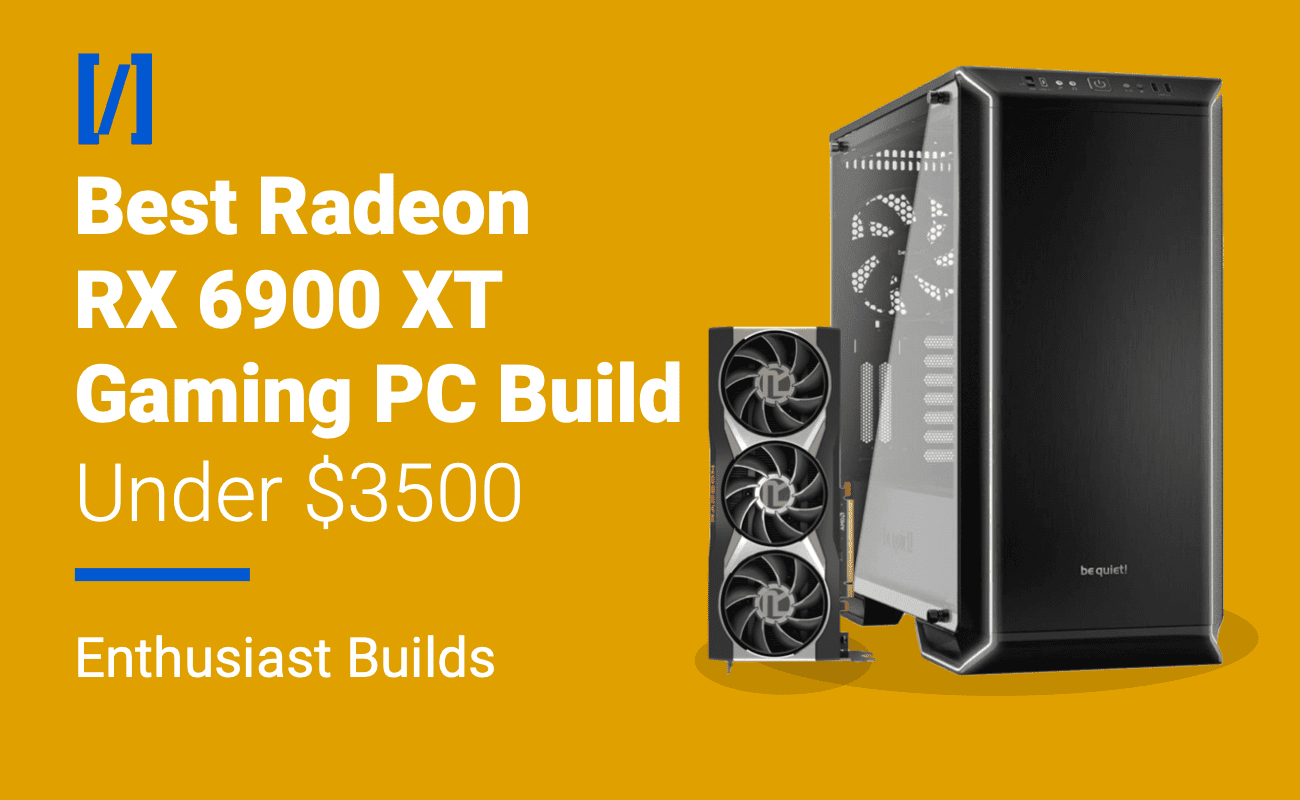 Next-gen Radeon and Ryzen are… just on the horizon 😊. Zen 3 and RDNA 2 represent some of the most impressive and affordable generational performance improvements that AMD has been promising for years since the launch of the original Zen architecture. They made a fantastic showing last generation for mid-range GPU performance with their Radeon RX 5700XT, which, understandably, made numerous gamers question whether they really needed to shell out the extra dough for immature Ray-Tracing features from Nvidia’s roughly equivalent RTX 2070 Super. Now, builders are facing an even more challenging question. Will RDNA 2 be worth the cheaper price tag in the face of Ampere’s incredible Ray-Tracing support?

DLSS (deep learning super sampling) was honestly a bit of a joke when Nvidia first developed it. Only a handful of games supported Ray-Tracing, and usually with limited application. Depending on the title and implementation, Ray-Tracing only offered minor visual improvements for a significant FPS penalty no matter how robust your build was. DLSS was initially intended to offset this penalty by rendering games at a lower resolution and upscaling them with Nvidia’s AI technology, but it simply wasn’t very effective. However, DLSS 2.0 has grown into a force to be reckoned with. Games like Control, F1 2020, Death Stranding, Minecraft RTX, Wolfenstein: Youngblood, Anthem, Metro Exodus, Battlefield V, Shadow of the Tomb Raider, Final Fantasy XV, and Monster Hunter: World, to name a few, all support DLSS and receive insane performance benefits with anywhere from 20-200% higher FPS by merely having it enabled. Whatever your opinion on any of those titles might be, free FPS is always welcome. That’s not even considering the plethora of upcoming games that will also support DLSS, like Cyberpunk 2077 and Call of Duty Black Ops: Cold War.

AMD has discussed RDNA 2’s Ray-Tracing support and their answer to DLSS, but they’ve yet to reveal any official benchmarks compared to Ampere, and, rumor has it, Ray-Tracing may not be the reason you want to opt for Team Red when it comes to the GPU for your next gaming build. Of course, we’ll have to see how things play out when AMD’s new hardware launches over this holiday season, so keep an eye for our latest updates and results!

Regardless of the Radeon RX 6900XT’s Ray-Tracing performance, one thing is certain, AMD is competitive at the high-end again, and for a deep discount. Compared to the $1500 RTX 3090, the RX 6900XT is only going to cost $1000. Translation: for $50 less than the cost of just Nvidia’s top-tier gaming GPU this generation, you can purchase the Radeon RX 6900XT and the Ryzen 7 5800X. We’re going to go out on a limb and say that even if the rumors are true and RDNA 2’s Ray-Tracing performance leaves a lot to be desired, AMD still makes a more compelling offer for the majority of gamers looking to build a new rig this year. Not to mention the uphill battle that Intel is facing in the wake of Zen 3’s reveal!

It’s likely that no matter how clever Intel manages to be with 11th Gen Rocket Lake, another 14nm process is going to struggle to compete with Zen 3 across the board, especially considering AMD’s incredible power efficiency. The top-tier gaming CPU from the new Ryzen lineup will be the $550 Ryzen 9 5900X. Just over $500 is about the tail end of what most gamers are willing to spend for optimal FPS performance if Intel’s Core i9 series has been any indication.

The 5900X is poised to not only trounce the current gaming champion, the Intel Core i9-10900K but with Rocket Lake maxing out at eight cores, the 5900X should still readily compete against the 11th Gen Core i9 series CPU as well. The new Ryzen 9 5900X sports twelve cores, twenty-four threads, boost clocks up to 4.8GHz by default, and 64MB of L3 cache. With technologies like Smart Access Memory and the new RAGE mode, an auto overclocking feature, pairing Zen 3 and RDNA 2 should see incredible benefits by opting for the beefy, if not slightly overkill for games, 5900X. The best part is that you’ll have more than enough processing power to tackle the most demanding creative workloads as well as max settings in the latest AAA titles at up to 4K resolution, each with buttery smooth performance.

Sitting atop our new 5900X will be the Noctua NH-U12A. There’s nothing wrong with liquid cooling, be it a custom open-loop or AIO unit. If you prefer the look of liquid cooling solutions, and if you’re willing to accept the maintenance and potential points of failure that come with them, you’re welcome to dive right in. However, I personally stand by air-cooling considering the level of performance that companies like Noctua, be quiet!, and Scythe can offer. A well-engineered air-cooler brings airflow and thermal performance on par with even some of the best 240mm AIO units on the market, and the 105W TDP of mid to high-end Ryzen Zen 3 CPUs isn’t exactly demanding. Thus, one of the most recent and well-rounded air coolers from the world’s premier heat sink manufacturers seems to make the most sense for our build today.

The NH-U12A essentially brings the thermal and noise performance of Noctua’s renowned dual-tower NH-D15 in a more compact, single-tower package. A dense fin stack, seven heatpipes, and two NF-A12x25 fans virtually guarantee cool CPU temps and spectacular case and RAM compatibility to allow you the most freedom when selecting the other components for your build. Finally, Noctua’s included NT-H1 thermal compound means you don’t have to spend any extra money to ensure you get the most out of the NH-U12A.

For nearly half the price, the Crosshair VIII Hero readily competed in VRM thermal benchmarks with the Gigabyte X570 Aorus XTREME and the MSI MEG X570 GODLIKE. That’s a respectable showing from a motherboard with teamed power phases, which was more than capable of handling last generation’s Ryzen 9 3950X. If you plan to see just how much headroom AMD has left with Zen 3, there are few better options for less than $700!

Just because our focus is gaming doesn’t mean we need to restrict ourselves to 16GB of RAM, especially nowadays. With multiple monitors, dozens of programs running in the background, inefficient browsers, and memory leaks, even if you don’t plan on doing any photo/video editing or 3D rendering, 32GB allows you the freedom to use as much of your machine as possible, simultaneously. Further, since DDR4 has matured incredibly over these past several years, pricing for DRAM has dropped considerably, meaning you have access to 32GB kits of high-performance memory for less than $200!

That is where the G.Skill Trident Z Neo 32GB (2x16GB) DDR4-3600 CL16 memory kit comes into play. While leaving you space to upgrade down the line should you choose to dabble in more intensive creativity/productivity programs, you’ll have ample memory to push your multi-monitor display setup, games, comms programs, and media consumption at the same time without worrying about memory usage.

Ding dong, spinning drives are dead… For the most part. Unless you have reason to store massive amounts of documents, photos, videos, and project files, solid-state storage is the way of the future. SSDs have come down so far in price, even for high-capacity (2TB) options, that gamers in particular need to consider making them their primary and secondary storage options for their libraries. Next-gen consoles having SSDs as their standard storage devices means that game developers have already (i.e., finally) started to take advantage of the speeds available with solid-state storage to stream assets directly to the GPU. The best example of this process in action is the Ratchet & Clank: Rift Apart trailer, where you see the dynamic duo traversing portals to different, incredibly diverse worlds instantly and seamlessly.

Thus, we have chosen two 2TB Samsung 970 EVO Plus M.2 SSDs for our OS and bulk storage drives. M.2 drives mean no cable management and some of the fastest transfer speeds outside of PCIe 4.0 SSDs. If you don’t play many games at once, utilize cloud storage for most of your general files, or just want to save some money, feel free to pick up only one and worry about upgrading later when you need the extra space!

The piece de resistance of our build: The Radeon RX 6900XT. Performance comparable to a card that costs $500 more and uses an additional 50W is borderline miraculous, and AMD is rightfully proud. Ray-Tracing aside, RDNA 2 looks to not only be gunning for the performance crown at 4K resolution but also for gamers’ wallets as they offer numbers that some users couldn’t even dream of shelling out for just a short year ago.

The Dark Base 700’s modular internals allow for completely inverted ATX builds, riser cards, and storage drive capacity with removable side panels. There’s even a removable panel on the PSU shroud for a bottom intake fan, which we’ll take advantage of in the next section! With two included Silent Wings 3 140mm fans and case-mounted fan controller, thermal and noise performance are great by default. The overall build quality is immaculate with a beautifully machined motherboard tray and exterior, and a tinted tempered glass side panel, making this one of the sleekest cases on the market.

To fortify our thermal performance and airflow, we recommend picking up four be quiet! Silent Wings 3 140mm High-Speed PWM fans. Two are for additional front intakes, one for the bottom intake below the PSU shroud, which we mentioned earlier, and one is to assist the included rear exhaust at the top of the case. This setup will maximize the performance we get from the NH-U12A and provide ample airflow for all of your components while keeping noise levels down and saturating the included fan controller.

Finally, the delivery of clean and stable power to our enthusiast build will be handled by a Corsair AX1000 80+ Titanium power supply. With the AX1000, we receive full modularity for easy cable management, the highest efficiency rating possible, plenty of overclocking headroom, and a total wattage that should put us in the optimal peak load efficiency range (where your system’s combined TDP equals ~50% of your PSU’s total). The team at PremiumBuilds will always stress just how vital your PSU is to your system. Ensuring a stable and clean supply of electricity to your components should improve their longevity and overclocking results, meaning you should always opt for the best possible option for your power supply. If there are two things you shouldn’t ever skimp on, it’s this and your motherboard. Buying the best you can for each component means that you can use them in builds for years to come, and Corsair’s 10-year warranty means some of you PC parents might be able to hand the AX1000 on to your next generation of enthusiasts!

Ray-Tracing or no Ray-Tracing, RDNA 2 is going to be marvelous, especially if AMD is capable of satisfying their demand even slightly better than Nvidia has been able to since Ampere launched. We might be looking at a typical case of the tortoise vs. the hare, and Nvidia might end up seriously regretting rushing the 3000 series out the door to try and crash AMD’s party. If you’ve got 4K or high-refresh 1440p gaming aspirations, AMD looks like a snack this holiday season 😊!