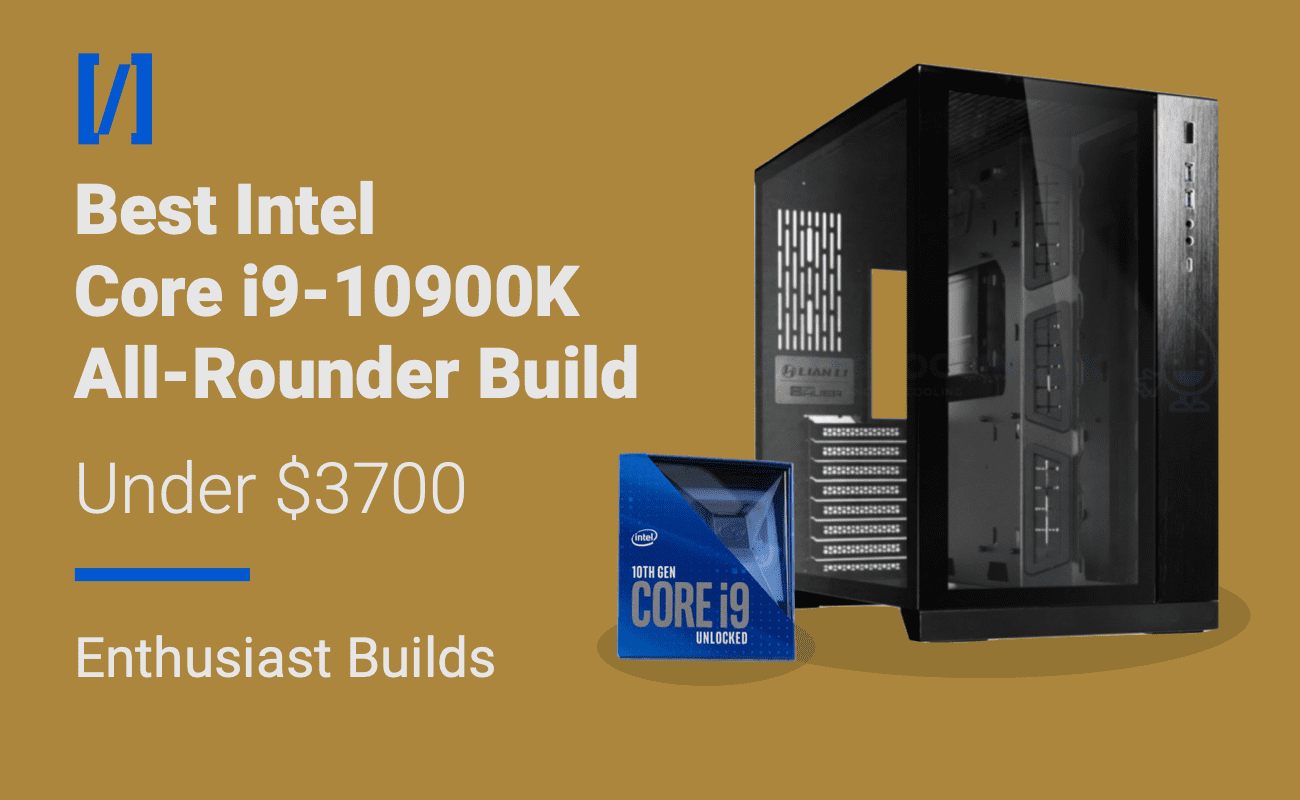 Intel has risen to the challenge of AMD’s onslaught on the CPU market. They have long since boasted of producing the ‘best gaming CPUs’ and so the new flagship CPU, the i9-10900K, pulls out all the stops to retain that accolade. This CPU has 10 cores and 20 threads with hyperthreading enabled. It boasts new technologies in the form of Thermal Velocity Boost and Turbo Boost Max 3.0 to enable peak core speeds of 5.3Ghz. Turbo Boost max acts to identify the highest quality cores in your CPU and ensure they are utilised in the most demanding tasks. On top of this ‘Thermal Velocity Boost’ acts to add 100mhz clock speed boost where the CPU temperature is under 70C and power delivery allows it. Intel is still stuck on the now ageing 14nm ‘core’ architecture so it takes this kind of optimisation to eke out their advantage – similar technologies have been deployed by AMD in the form of Precision Boost Overdrive and eXtreme Frequency Range to ensure that the end-user gets the best out of their CPU with minimal effort.

There is a downside to forcing a 10-core CPU on a 14nm architecture to run this fast and that’s power draw and consequently heat: This is not an efficient CPU. Whilst it’s listed as 125 Watt thermal power design that refers to the continuous power load. When conditions demand it, different power limits are defined by intel and implemented by the motherboard manufacturers, and of course, if you’re an enthusiast overclocker you can throw those limits in the trash and draw as much as you want. The CPU will happily draw 180W in the high demand ‘PL2’ state, whilst if you’re looking for an all-core overclock approaching 5.3Ghz then testing indicates the CPU alone can draw well over 300W in total. Those are huge numbers and indicate the need for an excellent cooling solution as well as a motherboard and Power Supply with capacious power delivery limits. Indeed looking at the high-end motherboard options in the compatible Z490 chipset it’s evident that the manufacturers have heeded the demands of this generation of Intel CPUs. You’ll see them adorned with power stages that wouldn’t be out of place in a power grid distribution facility with ranks of 14 and 16-phase voltage regulation MOSFETs with up to 90 amp capacity.

So what does this mean for our build? Well, to obtain the maximum benefit from this class-leading CPU, we’ll need to ensure that cooling and power delivery are up to scratch. We’ll also need a class-leading GPU to ensure that we’re generating as many frames as possible with current technology, and supporting parts that demonstrate the current cutting edge of technology and leave the CPU free to perform optimally.

So let’s take a look at the PremiumBuilds ultimate i9-10900K gaming & productivity build, showcasing the best parts currently on offer and maximising the potential of this class-defining CPU.

As outlined above the motherboard is critical to unlocking the performance of the i9 CPU. This high-end offering from MSI, the MEG Z490 Ace, straddles the line between extreme overclocking and all-round enthusiast performance. The power stages are a best in class 16 phase 90 AMP set up ensuring the CPU never wants for clean voltage, whilst MSI’s heritage boasts of extreme memory overclocking results. It has an understated and classy aesthetic, with heavy heatsinking and a bracing backplate strengthening the board. I/O is good, with dual 2.5G LAN and Intel Gigabit LAN and Wifi 6 integrated to the board as well as a host of high-speed USB connectivity and 3 M.2 slots of which we will populate just one: that makes future upgrades easy. A high current CPU pump header, CPU fan header, and 6 additional PWM chassis fan headers give the full control over the cooling solution.

The i9-10900K needs a top tier cooling solution to deal with its prodigious heat output: here we’ve taken advantage of the 360mm radiator capacity of the Lian-Li case to fit the EVGA CLC 360 all in one cooler. Three fans provide a 75 cubic feet/minute throughput to pull heat out of the coolant and keep the CPU performing at its best, and testing shows the EVGA CLC 360 performing equal to or better than counterparts like the Corsair H115i and NZXT X72. The neat branding matches the GPU and RGB helps set the look of this build. The fans can be swapped for RGB fans if desired, depending on if you want to turn the Lian Li Case into an RGB showcase or keep it discreet and functional.

For a high-end gaming system capable of streaming, gaming, and productivity work, 32Gb RAM ensures this all-rounder 10900K build can tackle it all. We’ve opted for 4 matched sticks of G.Skill Trident Z RAM with RGB to really highlight the build. This kit uses SK Hynix produced RAM and is listed on the QVL compatibility chart of the MSI Z490 MEG Ace motherboard meaning it’s guaranteed to run at the rated speeds, and enabling the overclock is no more trouble than selecting the XMP profile in BIOS and the motherboard handles the rest.

For storage we’ve opted for one f the eager competitors to Samsung’s throne: The Adata SX8200 Pro 2TB is a high-performance NVME drive using PCIe x4 lanes for read speeds in excess of 3,000Mb/s. The Silicon Motion SM2262EN 8-channel controller handles all tests with ease and despite the attractive pricing this drive performs alongside the very best available. The use of TLC nand means there’s no concern over longevity: This drive has a 1,280 Terabyte write endurance and a 5-year warranty. 2Tb gives ample space for the Operating system, day to day programmes, and a host of AAA titles to show the systems full potential.

When you’ve opted for the highest performing gaming CPU available, the Nvidia GeForce RTX 2080 Ti. the only other component holding you back is your choice of GPU: This is still the component that makes the most impact on gaming performance. For that reason, we’ve brought out the big guns: the EVGA RTX 2080ti FTW3 Ultra Gaming.

With SLI officially dead in the water circa 2020, a single top tier GPU is the path to gaming bliss. This GPU uses the Turing TU102 GPU die with an unrivalled 4352 CUDA cores acting in parallel to provide the most rendering performance ever packed into a consumer graphics card, whilst opting for the FTW3 gets you a binned GPU that will hit a higher overclock. Whilst EVGA state that the boost clock is 1755Mhz on this card, that’s conservative: We’ll place money on you not being able to find an FTW3 card that won’t hold 2Ghz stable with an OC Scanner derived overclock curve. EVGA uses a gigantic 3 -slot, 3-fan cooler to keep this GPU cool (and like the CPU it can pull over 300W when overclocked) whilst ICX technology carefully manages fan speeds to ensure it never sounds unruly.

This aftermarket RTX 2080 Ti card is backed by an industry-leading 3-year warranty, extendable to 5, meaning you can enjoy this GPUs’ power for years to come. It’s also part of EVGA’s ‘step up’ programme, so if they release a superior GPU within 90 days you can part-exchange this card against whatever is waiting in the wings. That peace of mind means you can get to gaming right away and still own cutting edge technology as soon as it’s released.

The Lian Li O11 Dynamic is fast becoming the favourite high-end PC case of the discerning builder. Few cases can boast a layout as well thought out as this: The PSU sits behind the motherboard in a separate compartment whilst the Motherboard and components sit in a glass houses showcase. A 360mm Radiator mount point acts as a partition between the halves, ensuring that exhaust air is carried directly away from the GPU and CPU. Cable management is a dream with an entire compartment to work within, whilst fan and radiator options are multitudinous: You can use AIO radiators as we have here, build full custom loops with discreet radiators for CPU and GPU, in short, let your mind run free with innovative cooling options to support whatever components and overclocking regime you choose.

If you happen to exceed the capacity of one PSU, there’s space for a second meaning you can feed GPU’s and CPU from separate power sources if you desire. The front panel boasts a USB 3.1 Type C connection and the case benefits from dust filters throughout, to keep that impressive interior clean. The case is built from steel with brushed aluminium accents to complete the premium look. Given its unrivalled specification, it’s clear to see why this case is so popular with those building high-end systems.

The PSU market has suffered more turmoil than almost any other over the last 6 months, making choosing a PSU harder than ever. Many of the industry stalwarts are out of stock or selling at hyper-inflated prices, but that doesn’t mean you can’t build your PC: There’s plenty of excellent options so long as you’re prepared to step away from the usual suspects. For this 10900K, build we’ve selected the Thermaltake Toughpower GF1 850W. This is a Gold efficiency rated fully modular power supply with specifications that match those from the likes of Corsair, EVGA and Seasonic, but it has the advantage that’ it’s actually available for purchase. It operates in zero fan mode for silence at idle but exhibits clean and consistent power delivery even under extreme load. The 850W rated output provides ample headroom for our 300W a piece CPU and GPU combination. The unit is backed with a 10-year warranty to give peace of mind.

The system we’ve created is capable of driving modern games to very high framerates whilst generating gorgeous visuals. To do it justice you need a worthy monitor. We’re proposing two options depending on your preference: 1440p 16:9 or else 1440p 21:9 ultrawide.

The ROG Swift PG279QZ is the update to the hugely popular PG279Q. This 27” 1440p 165hz monitor has an IPS panel for the best balance of colour vibrance and response times, whilst G-Sync ensures that you’re getting the very best adaptive sync technology to match frame rates to the panels refresh rate. Reviews highlight excellent panel quality and low input lag. The resolution is well within the GPU’s capability to drive it to high refresh rates, giving you the competitive advantage in online gaming.

Meanwhile, if you want a more immersive experience with a curved ultrawide monitor, the LG 34GK950F-B has your needs met. This 21:9 aspect display won’t reach the heady refresh rate highs of a 16:9 monitor, but does offer more workspace for productivity and works fantastically well with AAA titles and sim games with the additional screen space filling your peripheral vision. A 144hz refresh rate pairs with Freesync 2 technology (now compatible with the Nvidia GPU) to smooth out framerates and deliver a stutter-free gaming experience.

So, in this article, we hope that we’ve demonstrated a cost-effective and very high-performance gaming PC build that will allow you to get the most out of Intel’s new flagship gaming CPU, the i9-10900K.