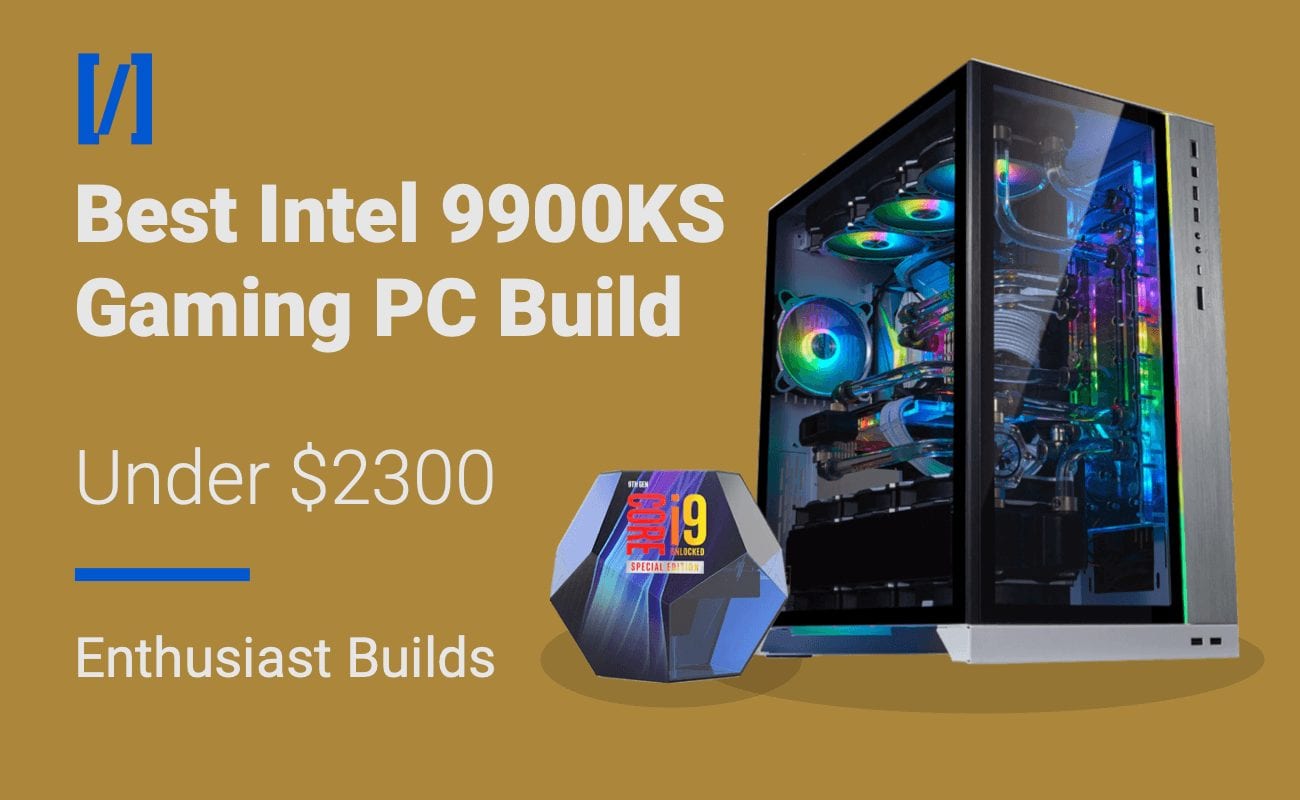 While gaming has become more and more accessible as manufacturers expand their product lines to include offerings at almost any price point, the enthusiast build still represents the near top-of-the-line components and holds a special place in the market segment. Enthusiasts are the ones that are serious about PC building, the ones writing reviews and judging products, allowing the rest of the market to benefit from their knowledge and passion. This build represents a great Intel-based enthusiast rig; it has great parts and sticks to a budget of $2300, because even enthusiasts have to draw the line somewhere. This isn’t quite the absolute best-of-the-best, as you’ll see when we discuss component choices, but it is very near the top and this rig will crush anything you throw at it. This is our guide for a $2250 Intel i9-9900KS Enthusiast Build in 2020.

The heart of this beast of a machine is the extremely powerful Intel i9-9900KS. The 9900KS is perfect for this rig: it has everything we want and nothing we don’t. In terms of things we want, the 9900KF has the 8 core and 16 threads that will allow it to excel at multitasking and provides some security that it will remain relevant for years to come. These cores have a modest base clock of 4GHz, but an absolutely incredible max boost clock of 5.2GHz (although sometimes not as a sustained all-core). It is also an ‘unlocked’ chip, as denoted by the ‘K’, meaning it is overclockable and tweakable for enthusiasts looking to get even more performance.

For an Intel enthusiast build, there really is no other option to consider for 2020. The 9900KS offers currently the absolute best-of-the-best, as well as great bang for your buck at $513.

If we want to get the most out of our CPU, and the 9900KF has a lot to give, then we need to keep temperatures cool. And the most important part of keeping a CPU cool is the CPU Cooler. Enthusiasts know that while AIO’s might look nice, they often under-perform for their price and when compared to top-of-the-line aircoolers. If this was a no-budget build, we might consider a custom water-cooling loop, but those would break our budget here. So instead, we’re going for the best aircooling solution on the market: the Noctua NH-D15 chromax.Black.

Noctua is known as the premier fan producer, and their CPU coolers use these fans coupled with beefy heatsinks to keep even the hottest chips running at peak performance. For years, people were turned off by the very odd beige/brown color scheme, but with the introduction of the chromax.Black line that sticks to a very elegant matte black, there is simply nothing to say about the NH-D15 that isn’t complimentary. The dual 140mm fan, six heat pipe set-up will keep your 9900KF running cool and quiet, even if you decide to delve into the world of overclocking. And to top it all off, the NH-D15 chromax.Black comes in at $100, less than many AIO’s that won’t offer anywhere near the same performance.

With the 9900KF being the heart of our build, the motherboard would be the brain. As the central unifier of all your components, the key to a strong motherboard is finding a feature-packed layout with strong VRMs to provide clean power to your CPU and RAM. A good motherboard will help your other components reach their full potential, and while something in the $200 or less range is more than enough for lighter CPUs, for our enthusiast build, we are going with something one step up. To complement our 9900KF, we recommend the Gigabyte Z390 Aorus Master to be the brain of your build.

Gigabyte knocked it out of the park with their Z390 line, offering some of the best performing motherboards at a bunch of different price points. For the 9900KF, we want something that has a great VRM set-up, plenty of features to connect m.2 NVMe drives and high-quality RAM, and the ability to control different aspects of the power supply at the BIOS level to help with overclocking. The Aorus Master offers all of that, and more: WiFi, USB-C connections, high-end built-in audio, and great heatsinks to help dissipate thermal buildup. Combining that feature set with the 12-phase VRM solution (which has performed brilliantly in online reviews) is a recipe for success. And at $290, while expensive, worth every penny to ensure your 9900KF and machine are able to perform at their highest potential.

If the CPU is the heart and the motherboard is the mind then the RAM is….well I’m not sure, the anatomy metaphor doesn’t work too well for RAM. If you have an idea, leave a comment!

In any case, Intel is not as particular as Ryzen when it comes to RAM, but for an enthusiast build, we still want to get as great as possible. And for RAM, that means B-die for the combination high clock speed and low CAS, giving us as low a latency as possible (and even better sub-timings with some adjustments). While any B-die will perform remarkably similar, for this build we selected a TEAMFORCE Dark Pro 3200MHz C14 2x8GB kit that looks good and has a nice heat spreader, without being too expensive. This RAM will let your PC run smoothly and support your CPU to the max, making sure that your other components run at full speed.

Alright one more anatomy metaphor then it’s done! If we have our heart as the CPU, and the brain as the motherboard, then the GPU is the muscle. When it comes to defining your power for gaming or modeling, the GPU is going to be the one doing the heavy lifting. And while CPUs aren’t cheap, it’s not uncommon for a GPU to cost between 40-50% of the entire build.

So for our enthusiast build (but not quite budget-less best-of-the-best), we are going for the newly released EVGA RTX 2080 Super XC Gaming. The Nvidia RTX 2080 Super is the successor the Nvidia RTX 2080, offering a slight performance boost for no additional cost. With 8GB GDDR6 VRAM, 1830MHz boost clock, ray-tracing, NVENC encoding, and the legendary EVGA warranty/support, this GPU is perfect for an enthusiast build. While AMD has some great cards in the mid-range, they currently can’t compete at the top. The 2080 Super will let you play 1440p 144hz in almost all games, and with some settings modified, 4K 60FPS. The 9900KF should let it fully stretch its legs, meaning you’ll have two powerful components helping each other perform better and not holding each other back.

For an SSD in an enthusiast build, we are going for an NVMe, premium SSD. We want something that is reliable, has TLC or better, and is at least 1TB. Many people will want to buy 2TB or more, but with the way storage prices are dropping, we would recommend buying 1TB now and then adding another once you fill it, because prices will likely be lower. Our choice based on the criteria above and the price is the Sabrent Rocket 1TB NVMe. This is a quality SSD that will give you plenty of storage and great speed without breaking the bank.

Choosing a PSU is about finding the highest-quality part you can afford, after taking into consideration the wattage you need. The PSU is the power supply, and you do not want your power supply to be the weak point in your rig. A bad PSU can not only cause reboots and crashes if it’s overwhelmed, but can fry parts if it is low quality. So for this enthusiast rig, we want enough headroom to overclock, and a top-notch PSU that has a great warranty and high reliability. To satisfy those criteria, we are going with the tried-and-true Corsair RM850x.

850W is more than enough for even an overclocked 2080 Super + 9900KF (the two most power-hungry components), and Corsair’s RMx line is known for being ultra-reliable (10-year warranty) and very efficient. For $125, there is no better PSU available.

The choice of case is of course subjective based on what type of aesthetics you like, but for an enthusiast build like this, we want something that will allow for plenty of airflow, leave room for water-cooling in the future we decide to go down that rabbit hole, has top-notch build quality/features, and shows off our beautiful build that we are sinking two grand into. Our case of choice that fills all these criteria is none other than the gorgeous Lian-Li PCO11 Dynamic XL, big brother to our favorite case. This is likely not a surprise for readers of the site, we always find a way to bring up this case when we are doing case reviews or builds, and the XL version ensures our great CPU cooler will fit, and adds a bit of RGB. Stunning aesthetics to show off your build (matte black with RGB accents in this case), allows for plenty of airflow, and keeps noise to a minimum. It isn’t the cheapest case at around $195, but you sure do get a lot of bang for your buck.

The only downside to the Lian-Li O11 Dynamic XL is that it comes without case fans. So to help keep your enthusiast build cool and maximize airflow, we are doubling down on Noctua and taking advantage of the variety of mounting options for the O11 Dynamic with 5 x Noctua 120mm NH-F12 chromax fans. The fans will mount well on the top for exhaust and on the front to serve as intake, complementing the CPU Cooler and creating a great airflow tunnel within the case.

This build represents a cutting-edge machine based around the beastly 9900KF. As an Intel enthusiast build, you are one step away from the ‘I-Have-No-Budget’ build that everyone dreams about, but you are getting 95% of the performance at a serious price reduction. This build will crush gaming at 1440p 144hz or 4K 60hz, and will complete productivity tasks as quickly as almost any CPU on the mainstream market. The case fans and CPU cooler will keep your components chilly, while the RAM and GPU will keep you moving fast. Plenty of storage from the NVMe, with spots to add-on later, and a beautiful motherboard to hold it all together. This ain’t yo’ mamma’s build, this is an Intel enthusiast build that will satisfy even the most power hungry users out there, and all for $2250 or $2000 if you find some good sales.