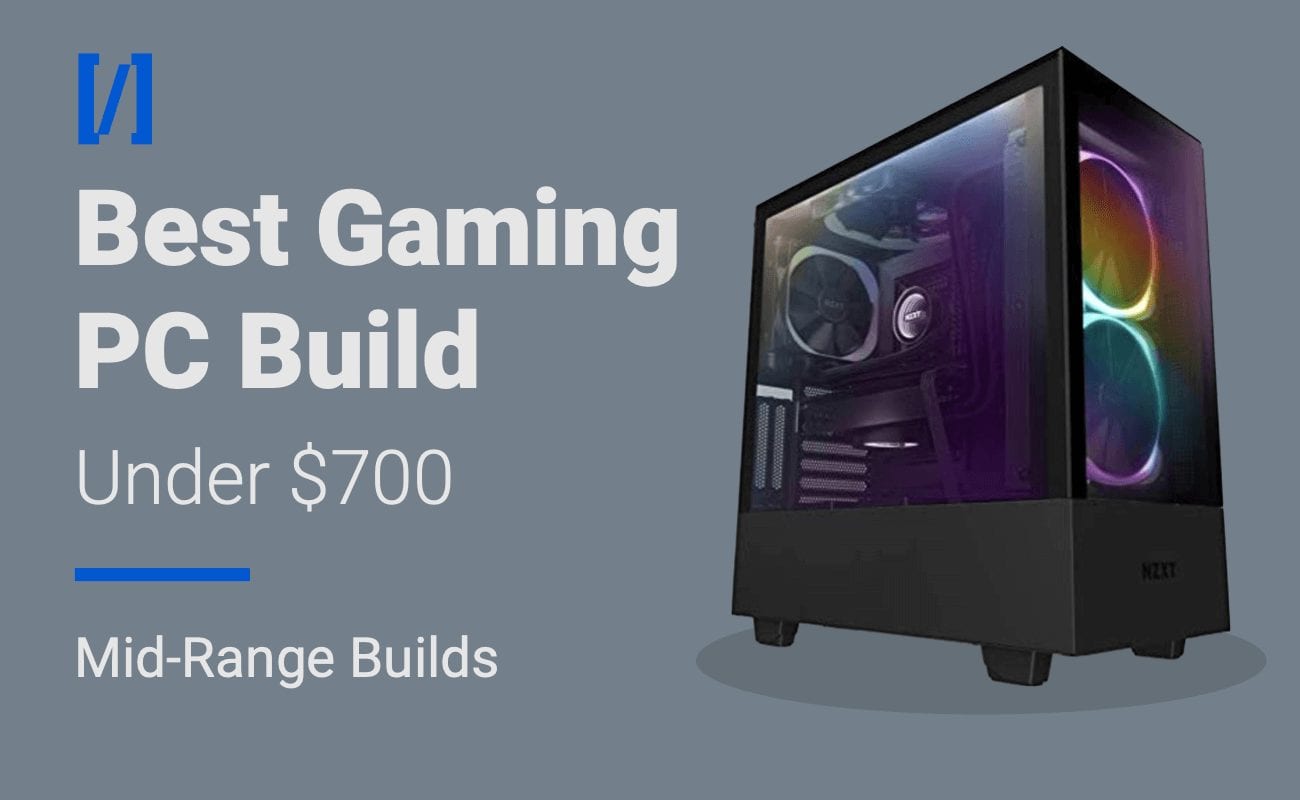 We’re entering the territory of strong gaming PCs with this $700 build. This build mainly improves on the GPU power of our $500 gaming PC build, needed for that extra gaming performance. The Ryzen 5 2600 CPU is still great for this type of list thanks to its unlocked 6 cores and 12 threads for a great price and (if needed) great upgrade path down the road. Its the only CPU that makes 2 of our build lists in different price brackets; it’s that good.

We’ve gone ahead and chose to pair the powerful RAM and CPU/motherboard combo with a GPU that currently dominates the $250 price bracket, the Nvidia GTX 1660Ti; though you can save a little bit of money without a big performance deficit by going with the Nvidia GTX 1660 SUPER.

This build will be enough to play every game at 1080p resolution and Ultra graphics, or if you fancy competitive games more, you’ll be happy to see 144 fps and more in many of the eSports games out there like CS:GO (this one will run over 250 fps surely), Fortnite, PUBG, Apex, CoD, etc. This $700 build is everything a 1080p gamer would want and should be enough for anyone that doesn’t yet want to step in the high-end class.

We’re going to use the same CPU as in our $500 gaming PC build since frankly, we’re going to mainly improve on the graphics aspect of the build, CPU power is more than enough at this price point of $700. 6 cores and 12 threads is still the sweet spot in 2020 and applications are continually optimized to benefit from more threads; thus, this processor punches well above its price and it’s well worth the buy to get into the Ryzen ecosystem. The Ryzen 5 2600 is a small and very power efficient workstation beast that is incredibly punchy for its price. It can game and stream at the same time and do some rendering on the side with very decent performance. In this $700 gaming PC build, you probably can’t find a more suitable and balanced CPU for a good gaming PC; a more expensive CPU wouldn’t allow enough budget for the GPU while a less expensive CPU would probably bottleneck the GPU in 144hz gaming.

The Nvidia GTX 1660 Ti GPU is a good upgrade from the RX 570 in our $500 gaming PC build; with its 60% performance uplift, this card is able to comfortably run the latest games with great performance at 1080p and will nicely drive 144hz monitors in at least all the eSports games out there. If you want to competitively game at 1080p, you need nothing more than this on the graphics front. Power consumption and noise levels are also on the low side, the card being very efficient even with overclocking dialled in.

Because we’re using the same CPU as our $500 build, there’s no reason to change the great motherboard that we chose for that build, the ASRock B450m Pro4. The power requirements didn’t change and the board will perform excellently here as well. Capable of pushing the Ryzen 5 2600 to its limits while looking clean, staying cool (thanks to its good VRMs) and boasting good I/O on its back are solid claims for this motherboard at this price range. Its BIOS is not the best looking in class but it still has all the options you need to run default or tweak to your heart’s desire. This motherboard is great to get even if you plan on upgrades later on because its ability to drive even the latest Ryzen 3000 CPUs and probably the upcoming 4000 series next year.

At this price point you have no excuse not to get the 2x8GB | 3200MHz memory. Fast RAM provides a significant boost in performance over the lower clocked memory in areas such as 1% and 0.1% low FPS – meaning that you will notice little to no stutter during gaming (which we know its always annoying). CPUs, especially the Ryzen series, love memory speed because it reduces access latency.

This results in improved loading and responding times, increased maximum FPS and minimum FPS; gameplay smoothness is big enough of a benefit to opt for fast RAM and 16GB is plenty for this $700 gaming oriented build. You may be inclined to want 32GB for future proofing (so two sticks of 16GB of RAM) but you won’t notice any great benefit from it without upgrading your CPU to higher tiers.

An SSD is mandatory for any price-range build 2020 and this $700 build has a great SSD to keep everything running fast and smooth. This particular implementation features fast storage with cache for even the most intensive transfers; in small words, this SSD never slows down.

For this list, we can afford a great looking case with tons of functionality. The Phanteks P300 will certainly ‘wow’ you in areas like cooling performance, all-around looks and ease of setting up.

For this build we chose a Corsair CXM 550W PSU thanks to its excellent value in the midrange market. 550W is a sweet spot that will be exceeded only by the most power-hungry builds and judging by other aspects such as great build quality, semi modularity and sleeved cables, this PSU is hard to beat in its price range and this is why it makes this list. The extra cables that your build doesn’t use can be saved for future upgrades.