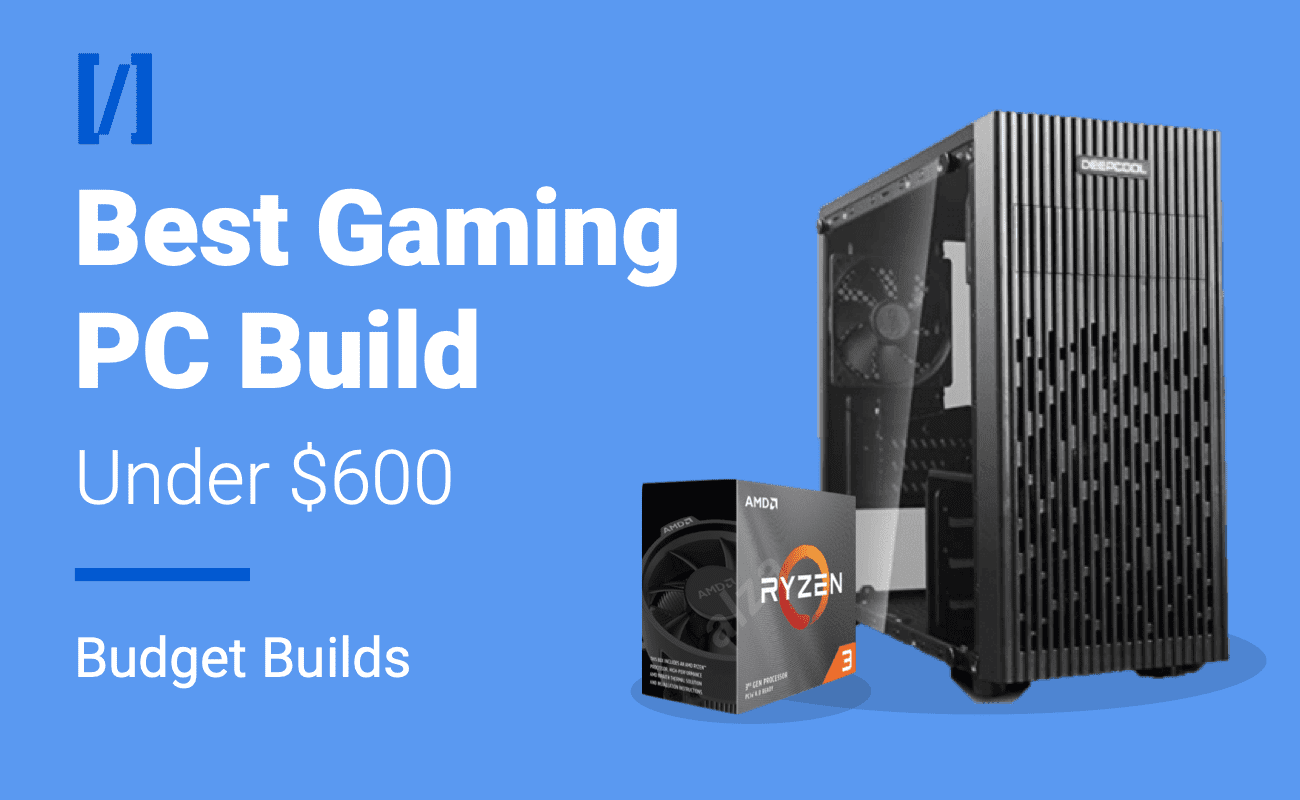 Here at PremiumBuilds, we’re all about pushing the envelope of what performance your money can buy in the PC world. We’re living some exciting times in the components market thanks to the high levels of competition on every component a PC build needs. This $600 part list that we’re presenting here is an indirect follow up to a $700 one we’ve did at the start of this year; we’re talking about a Ryzen 5 2600 CPU paired with 16 GB of fast Dual Channel RAM and a graphics card that laughs at anything 1080p while putting really good numbers even in higher resolutions. With this $600 build and 8 to 9 months later, we’re trying to slightly exceed those performance levels of the previous $700 build with a new build planned around the $600 price mark.

A new exciting CPU has been launched a few months ago which, on paper, isn’t something really exciting or some kind of performance king. The unlocked 4 core / 8 threads Ryzen 3 3300X is an entry-level CPU that puts out a heavy fight in the gaming department thanks to its single CCX design. Launched together with it, the Ryzen 3 3100 has the disadvantage of having 4 cores enabled on two different Core Complexes (CCXs) and this slightly affects gaming performance due to the introduced latency of cores communicating with one another. The Ryzen 3 3300X is the first AMD Ryzen 3000 CPU that has all its cores on the same CCX and it makes a sizable difference; gaming performance is up to 10% faster than its very similar brother, the Ryzen 3 3100. This aspect gives us a lot of prospects and insight into the performance of upcoming Ryzen CPUs with cores on the same CCX and its also why this 3300X CPU makes this list in favor of the 6 core / 8 thread Ryzen 5 2600 featured on our $700 list. We’re building a gaming machine here and when compared with the Ryzen 5 2600, the 20% higher single-core performance and comparable multi-core performance of the Ryzen 3300X feels one or more steps ahead, at least in the gaming department.

We promised we would beat the performance of the previous $700 high-value build and we will do so because even if this $600 build has a slightly slower GTX 1660 SUPER (2-3% slower than GTX 1660 Ti), the difference is more than made up for it with the added CPU performance of the new Ryzen 3 3300X. eSports games like Counter-Strike: Global Offensive, CoD Warzone, Valorant, or Fortnite will heavily benefit from the much better single-core performance and heavily GPU bound titles will perform about the same in average FPS but with better minimum frame rates which leads to a smoother experience. This $600 price point is also very important for the PC market because it fits right around the launch price of the upcoming Play Station and Xbox generations.

Enough with the talk, lets get on with the list!

We’ve rambled about what this little powerhouse of a CPU can do and rightly so; many people will remember that 3 years ago the 4 core / 8 thread CPU was the top consumer processor, in the form of the Intel Core i7 7700K. Today, we consider a 4 core / 8 thread CPU tiny thanks to how the market has evolved and how the mainstream market now offers AMD’s 16 cores / 32 threads 3950X and Intel’s 10 cores / 20 threads in a mainstream consumer platform. Those CPUs are also very workstation focused and cost themselves around the price of this full build.
We won’t need them in our $600 list thanks to how the Ryzen 3 3300X is capable of offering stellar 1080p performance at the low price of ~$130. And that’s our focus, right? High and stable frame rates when paired with a midrange GPU like the GTX 1660 SUPER.

This build features the latest iteration of AM4’s chipsets, the midrange B550. Nothing special here but a motherboard that will easily handle the Ryzen 3 3300X and any upgrade you have planned for the future thanks to its compatibility across the whole Ryzen stack.

The board features the mandatory 24-pin ATX power connector, 4 x SATA ports for your storage, and a USB 3.0 header. The audio, CMOS, TPM, and COM headers are all present on the bottom of the board and the I/O is good for this price; on the rear panel, we get 2 x USB 2.0 ports, a shared PS/2 port, HDMI, DVI-D, and D-sub video output, 4 x USB 3.2 ports, audio jacks, and a gigabit fast ethernet port.

Thanks to the high competition in the RAM market, we can get good memory kits for a fraction of previous years’ DDR4 prices. This RAM kit is an example of that and it offers very good capacity at 16GB and great bandwidth thanks to Dual Channel (two RAM sticks). One well known recommendation is to buy two memory sticks over a single one in order to get the full bandwidth which, for our interests, translates to smoother performance in gaming situations.

If you can’t find this exact same 3000 MHz CL 16 kit, you can swap it with a different 2 x 8GB one but be sure to aim for similar speeds and latencies. Such a memory kit or even a 3200 MHz one shouldn’t exceed $60-65 as it perfectly fits this price range.

This may be the most unexciting component in this build because its simply just a basic solid state drive with average rated speeds. Its enough for most gaming builds though if you want more storage for your files or game library, consider looking for more capacity or getting an additional SSD from an older build. We highly recommend having an SSD for the boot drive because it takes the whole PC experience and snappiness to a new level.

Older HDDs can be easily added in order to store rarely accessed files like documents or movies so feel free to use those as well if you desire; 4 SATA ports is usually enough for anyone!

Even if its now almost an year old, this 6GB card sits right under the RTX 2060 GPU, neck and neck with the GTX 1660 Ti in raw performance. You can’t expect a lot of ray-tracing capability at this price point from the likes of the RTX 2060 so that shouldn’t be your focus; what it should interest you though, especially in a $600 build is how capable the 1660 SUPER is for $229. The closest in performance you can get is a Radeon RX 590 which is around 15% slower, more power hungry and priced around the same. That makes the GTX 1660 SUPER a great opportunity and the best value in the Turing line-up.

Around 30% better than one of the most popular 1080p cards, the GTX 1060, the 1660 Super will crush 1080p gaming in both ultra graphics AAA titles and high refresh rate eSports games. Paired with the Ryzen 3 3300X, you’ll be able to play any eSport game from the likes of CS:GO, Valorant, Fortnite, CoD Warzone, Rainbow Six Siege and others always above the refresh rate of a 144Hz monitor and that’s a great level of performance to have from such a mid range build.

Its also important to note that even if the ASUS variant we’re recommending here is a great implementation of the GTX 1660 Super (silent operation, good form factor and cool temps), if you can’t find this in stock where you live, other similar priced options will do the job just as well. It would be best if you’d check our list of all GTX 1660 SUPER custom graphics card implementations.

By using the SUPER variant of the GTX 1660 we are able to fit in the $600 budget and remain very close in raw graphics performance to the GTX 1660Ti.

The Matrexx 30 case has a rather spacious feel to it and designed around an open style layout. An ODD bay is present with minimal intrusion in the top of the case. A power supply shroud is not present so you’ll have to do the majority of the cable management around the back of your motherboard but if you feel like you need a PSU shroud then you’ll have to take a look at other cases with a higher price point. Deepcool however has designed the steel side panel to allow for extra cable management space; the Tempered Glass front side panel is also a rarity at this price point.

Temperatures are kept under control by a 120mm pre-installed rear exhaust fan; the case also has an additional slot for a 120mm case fan on the front panel. The honeycomb style mesh vent together with the very efficient components in this build means you’ll experience a silent build that will not get hot even in the most intensive gaming sessions.

The power requirements of this PC are taken care of an EVGA unit that can output 450W with 80+ efficiency. Don’t be fooled by the lower price point of this power supply because EVGA still takes seriously every safety aspect of this product.

With its sleeved cables, silent operation, and simple but sleek looks, this power supply fits this build very well in both budget and power requirements. The build won’t even come close to the 450W this PSU can output thanks to the efficient Ryzen 3 3300X & GTX 1660 SUPER.

If you’re not a big fan of console gaming and would like to find something with high performance which at the same time, doesn’t break the bank, then this $600 build might just be for you! We’ve focused on balanced CPU & GPU performance in order to get the best possible performance in both eSports and Triple A games. If you plan to game on Ultra 1080p, high refresh rate 1080p or entry level 1440p this build will definitely not disappoint. On the contrary, you’ll probably be amazed how this little beast handles everything with ease.

Last year we’ve put up a $700 build that crushed 1080p gaming but this year, you can get even better performance out of a $600 build; that’s progress for us consumers and we’re very happy to be able to give you more and more builds similar to this one.

There are some areas where you could spend a little more money in order to upgrade a few components. One of them is the SSD; you can get a larger one, with more capacity for your files, OS and game library or a faster one like an NVMe drive (the motherboard supports it). The other area would be the PSU if you plan on upgrading to a more powerful graphics card or processor in the future.

The great thing about getting a Ryzen 3 3300X together with a B550 (or even a B450 board) is that you’ll be able to upgrade your CPU on the same motherboard with no additional stress; just BIOS update, swap the CPUs and you’re ready to go!

We hope that the sections in this article have been informative enough for you to go ahead and make your dream PC come true, regardless of your price range. Any further questions can be easily addressed in the comment section below. We will also be doing complete building video guides in the future so stay tuned for that!