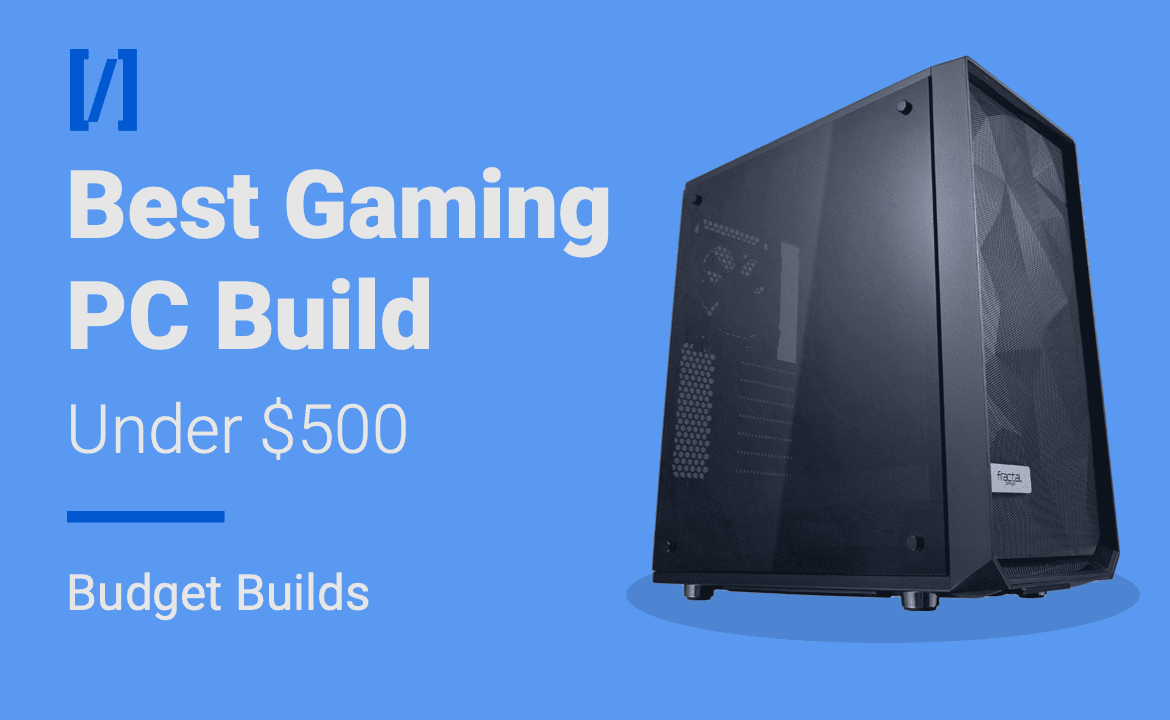 A $500 PC build today can provide tremendous value to the buyer. If you’re looking for a responsive system that can play even the latest games at 1080p with a good amount of details and still have enough power to do the hardest of daily tasks, look no further. With as little as $500, this system does it all and it should be enough for most people; even a starting point for anyone switching from Console to PC. We regard this build highly thanks to the Ryzen 5 2600 and Radeon RX 570 motherboard-CPU combo, which is a godsend for builders on a budget. Every component in this build is carefully chosen to make sure everything is compatible and the building process goes smoothly and without any trouble.

You can also get similar components to the one in the list below; for example, there’s no issue if you get a Gigabyte RX 570 instead of the XFX RX 570 we featured. As long as you do a little bit of research on different components, you can mix brands with no issues. Different companies do different implementations of similar components; that’s why you see a lot of different GPUs/SSDs/RAM/etc of the same type but with different naming. Get you components based on availability and pricing but keep the component models close to this list.

Just $200 more expensive than our $300 office build, it gives us some breathing room to create a good 1080p entry gaming machine that will play most games in High/Ultra details with very good frame rates. List of improvements over a basic office PC include the CPU, RAM and PSU.

Below is the parts list for our $500 budget gaming PC build – perfect for 1080p at high/ultra settings, as well as great workstation capabilities.

Out of the same Ryzen 2nd generation series comes the Ryzen 5 2600 which features 6 unlocked cores and 12 threads (that’s an additional 2 cores and 8 threads over the previous 2200G!). This CPU is a small workstation beast that is incredibly punchy for its price. It can game & stream at the same time and do some rendering on the side with very decent performance. In this $500 build list you probably can’t find a more suitable do-it-all CPU for a good gaming PC.

This list has a dedicated GPU in the form of the RX 570 which is for almost 3 years now, the best value budget card. It can usually be found new for a little over $130 or used under $100. The 4GB and 8GB variants don’t present much performance difference and if you’re on a tight budget, I’d suggest getting the 4GB one. It’s very hard to take this GPU’s crown because it treats 1080p gaming very well still, even with the latest titles.

A small upgrade on the previous office PC motherboard (seen in our $300 PC build guide), the ASRock will allow better overclocking capabilities for the Ryzen 5 2600 and better I/O; it also boasts better VRMs (Voltage Regulator Modules) for cooler running under load. If you can’t find this board in your region then a similarly priced B450 AM4 motherboard (like the products from MSI/ASUS/GIGABYTE) will do the job well. A comparison of the top motherboard brands can be found here.

At the $500 price point you can easily afford to get the 2x8GB | 3200MHz memory that provides a significant boost in performance over the lower clocked memory modules. CPUs, especially the Ryzen series, love memory speed because it reduces access latency. This results in improved responsiveness, better average FPS and much better minimum FPS; gameplay smoothness is enough of an argument to go with such memory modules and 16GB is enough for this gaming-oriented build. Just make sure you are always getting dual-channel memory for your builds (two identical RAM modules).

An SSD is mandatory for a build in 2019 and this build has a small one to keep everything within budget. Consider shelling out $20 more for a 480/500GB SSD if you’ll be installing a lot of apps and games.

For this list we’ll be using one of the best ATX cases in this price range. The Cougar MX330 case comes at a very good price for its features; a sturdy side panel, PSU shroud and multiple cable management options. For the price and the design, this case is hard to beat and easily makes it into this list.

The PSU is a decent upgrade over the one featured in our $300 office/light gaming PC build – in the sense that it features higher wattage output and modularity; essentially, you’ll be able to only use the cables that you need and not crowd the case with the ones that you won’t be using. Save them for future upgrades.