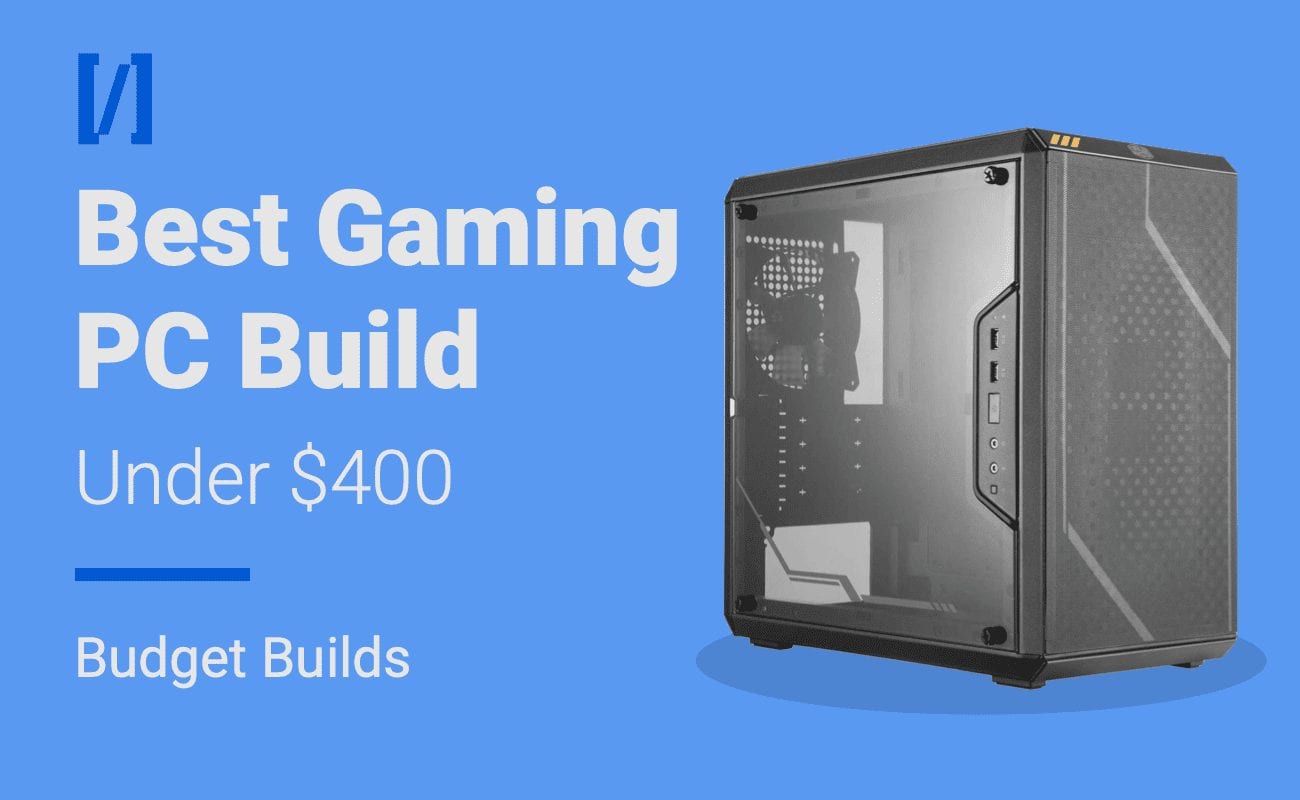 So you want a gaming PC but cash is tight… No Problem! In this article, I’ll run you through a build specification that gets you a fully functional gaming PC for just $400. We’ve done the leg work to find affordable parts that provide an easy upgrade path as your tastes and means develop over time.

This build is aimed firstly at getting a functional PC that will let you explore the versatility of a PC: That means it will be happy to let you browse, edit photos and simple video, and of course play the vast majority of games. Due to the budget constraints, we’re going to make the fullest use of AMD’s 3200G CPU. This is technically an ‘APU’ in that it combines a 4 core CPU with 8 AMD ‘VEGA’ graphics cores – the result is that this single component provides an all in one processor and graphics solution to get you started. However, it doesn’t stop there. For every component, we’ve considered not just how it will work in this build, but how it will support you over time as you inevitably upgrade and modify this system to meet your needs. Every part has been chosen to smooth your path in future so that this PC isn’t just a computer, it’s a platform towards your very own premium build. We’ve adopted a ‘keep it simple’ approach to minimise the components you need to buy and therefore maximise the value in the build but this list includes everything you’ll need to get a working PC except a Philips size 2 screwdriver and a  monitor or TV to output to.

Performance expectations from the Ryzen 3200G

The 3200G utilises AMD’s ‘VEGA’ architecture on the CPU die in order to provide 8 Vega Cores. These specialist cores focus on 3D graphics rendering and the APU uses the system RAM as video RAM as well. This is an impressive amount of functionality from an $87 part but it does carry some inherent limitations. 3D performance is remarkably good, but it is limited. Demanding AAA games like Grand Theft Auto V will be playable on low settings only, whilst titles like Red Dead Redemption 2 will demand that you drop settings AND resolution to 720p to have the game run at around 30fps – you won’t be experiencing it in all it’s glory using this set up. However, e-sports titles and well optimised games will run with remarkable visual fidelity and fluidity and the vast majority of the PC game catalogue will run with pleasing results. This lets you delve into all manner of gaming experiences at a very low price point. You can find videos on youtube documenting the 3200G’s performance across a range of titles so have a look to ensure you’ll be happy with the performance in the games you want to play.

Let’s get into the part by part breakdown of this system:

This system is built around the incredible value offered by the Ryzen 3 3200G ‘APU’. This $87 processor uses AMD’s ‘Zen+’ Architecture, using a 12nm fabrication process. It is a quad-core CPU without multithreading but also packs 8 Vega Graphics processing cores to provide video output. Along with the 3400G, It’s somewhat unique in the AMD line up – only CPU’s with the ‘G’ suffix have inbuilt graphics and any other AMD CPU’s require a dedicated Graphics card to obtain a functional PC. The 4 cores self boost to 3.6Ghz but those of you who enjoy tinkering will be able to achieve mild overclocks for a little more performance. It’s plenty of CPU power for general tasks and gaming and it’ll happily support a mid-range GPU if you choose to upgrade in future. The quirks and nuances of the CPU are that it needs fast RAM to allow the VEGA cores quick access to the information they need to render out images – your system RAM doubles as video RAM and RAM speed has a dramatic impact on performance in this setup. It also ships with a basic CPU cooler – the wraith stealth which has thermal paste pre-applied, so there’s no need to spend any more on those items.

This motherboard, the Gigabyte B450M DS3H, is amongst the cheapest B450 motherboards on offer. We’ve opted for this over the cheaper A320 motherboard options because it allows for overclocking meaning you can get the best performance out of your CPU, and it has markedly better build and feature sets than those rock bottom boards. It includes HDMI and DVI-D video output, onboard Ethernet and sound output, and 2 full-length PCIe slots and one x1 PCIe slot to make fitting a WiFi PCIe card simple. There’s an M.2 connector that we’ll populate with the main SSD for this system. The CPU power delivery is a 4+3 phase set up which is nothing to write home about but it will happily support the demands of a 3200G or for example, the 6 core Ryzen 5 3600 if you choose to upgrade in future. The BIOS is compatible with this ‘3000’ series CPU since BIOS revision F40 so you’ll have no issues booting right out of the box. But, if you’re in doubt check with the Vendor that you’re getting up-to-date BIOSwith the board you’re buying. In the box, you’ll find a SATA cable and m.2 mounting hardware. Overall this motherboard is a no-frills option that gets you what you need without overspending.

RAM performs an important dual role in this system which is why I’ve chosen a kit, the G.Skill Aegis, with the following features: 16 Gb in 2 matched 8Gb Sticks, 3200mhz speed, and tight CL16 timings. RAM specification has a huge impact on the systems ability to process and render 3D imagery because using an APU means that the VEGA cores use system RAM as video RAM. In a dedicated graphics card, there is usually 4-8gb or more of very high specification video memory with ‘GDDR6’ being the current specification. System RAM is DDR4 or 4th generation and has much lower bandwidth. To combat this disadvantage we need to ensure 2 things: First that the RAM is a matched 2 stick kit to operate in ‘dual-channel mode’. This pairing of sticks effectively doubles the throughput of the RAM with a dedicated channel from the CPU memory controller talking to each ram stick. Secondly, we want the ram to operate at a higher frequency, increasing throughput. This 3200mhz kit should have no problems operating at its rated speed, which is activated simply by selecting the predefined overclock profile in BIOS settings.

Further, because 2Gb of ram is partitioned off for video use, the system loses that for general use. This is why 8Gb (2x4Gb) is unsatisfactory in an APU system, with 2Gb hived off only 6Gb is available for the operating system and game code and this is small enough to trigger performance problems in resource-hungry games. With 14Gb available, however, you’ll experience no such problems. To cap it off, if and when you do decide to add in a dedicated GPU you’ll have the full 16Gb RAM at your systems disposal which is plenty for all normal PC tasks and gaming.

This is a high speed ‘NVME’ drive and uses ‘QLC’ flash memory. This quad-layer memory allows manufacturers to cram more storage onto each chip keeping costs low, but it does negatively impact speed: this NVME drive is not as fast as more expensive ‘TLC’ drives. That said it’s an order of magnitude faster than any mechanical disc drive and provides a snappy responsive experience when booting up and in use.

500Gb is plenty of space for an operating system, several large games and a good number of smaller games. It might be tempting to opt for a larger 2Tb HDD initially, but we advise against it: It’s FAR easier to add a hard disk to this system later for more storage than it is to clone a hard drive onto a smaller SSD or re-install the operating system onto an SSD and reconfigure the system come upgrade time. This drive gets you started with fast, reliable storage space and can then continue to operate as your core OS drive in future. The m.2 form factor means no cables are required for fitment, it slots straight into the motherboard and is held in place by a single screw and standoff.

We’ve chosen the very popular Q300L mini-tower case from Cooler Master. This version has the ‘TUF Gaming’ branding and works out a few dollars cheaper than the standard version at the time of writing. It’s a versatile mATX case which can be laid flat or stood on its side, and it provides plenty of space and a window to view components. It’s no secret that this isn’t the best thermally performing case on the market but we’re only loading it with a 65W CPU and little else to make heat: it’ll perform fine in this configuration or with a mid-range GPU in future. It will accept GPU’s up to 4-slots deep and 360mm long meaning that virtually any GPU you choose in future will fit without a problem. It ships with an exhaust fan, and cabling and hardware to hook up the USB ports and buttons.

Finally, we come to the power supply which is a critical part of any PC build. Unfortunately at the moment, we’re suffering the compounded effects of the trade wars with China and supply issues due to COVID-19 meaning that the choice and price of PSU’s has been haywire for a while. It’s really a case of finding any available reputable brand PSU with an output of 450W or more. Currently, the Thermaltake Smart BX1 Bronze 550W PSU is available at a reasonable $59. This 550W PSU has ample power for this system as is, but will also happily power an additional GPU in a future upgrade, minimising the cost and trouble of upgrading. It has a 5-year warranty and the full suite of thermal and overcurrent protection.

Suggested upgrade path for the future

As stated, this PC has been specified with upgrades in mind. The first item should definitely be a dedicated GPU, and the PC is ready to accept and power any mid-range GPU without additional purchases or modification.  A suitable good value GPU for 1080p gaming would be an AMD Radeon RX580 at around $150 or a Nvidia GTX 1660 Super at around $220. Either of these options would transform this PC from an entry-level gaming PC to a very capable 1080p gamer, with demanding titles running well at high settings.
Other upgrades could include a 2Tb or larger hard disk, or SATA SSD to improve the storage capacity and either of these options are plug and play, with the original operating system already on the main SSD from the initial build.

If you want wi-fi connectivity we’d recommend a simple PCIe WiFi add-in card such as the TP-Link TL-WN881ND at $16.

Finally, following the addition of a GPU, a Ryzen 2600 or 3600 CPU would be a substantial upgrade for productivity tasks or more demanding games and will be a tempting option when these CPUs are available on the second-hand market.

I hope in this article we’ve demonstrated that with $400 you can get a great starter system that will impress you right from the start, but moreover, one that gives a basis to grow with your needs as they develop.