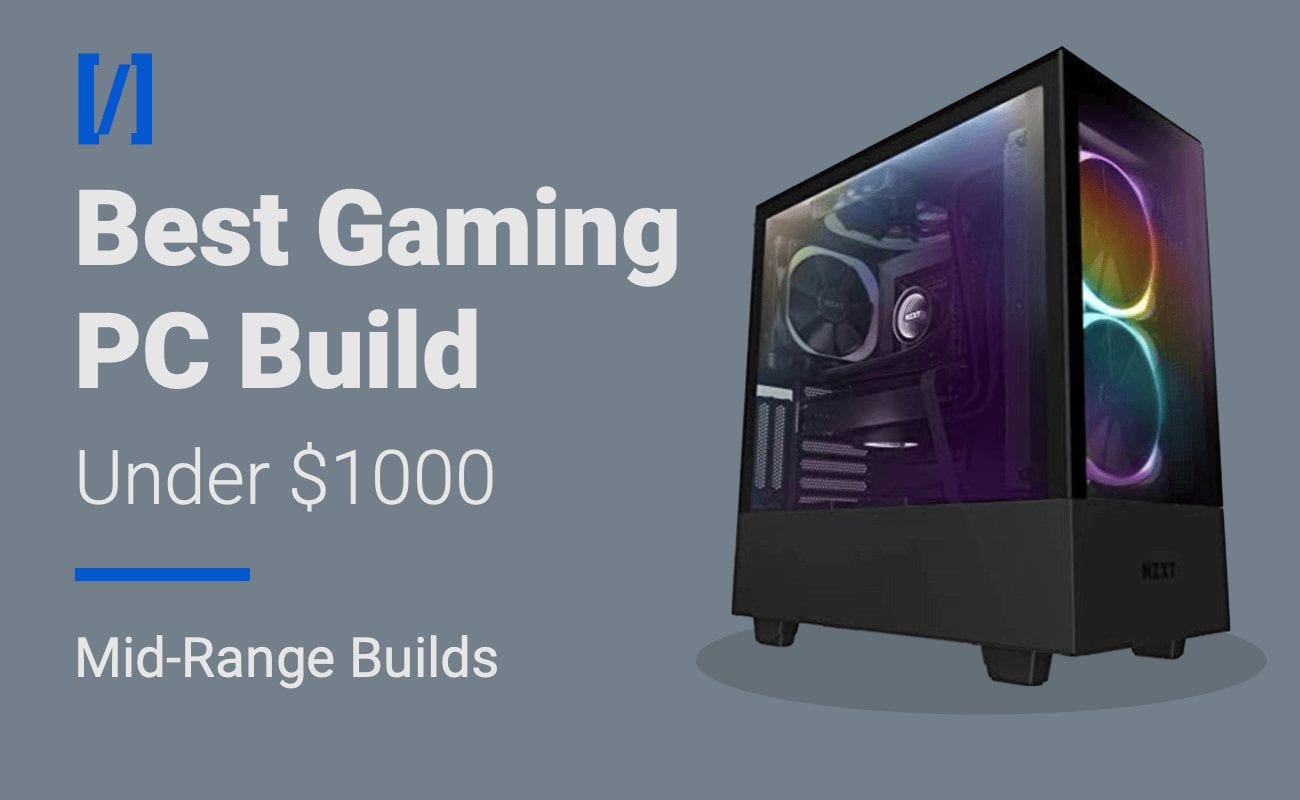 In our series of recommended PC builds at different price points, we now get to the mighty $1000 price mark – allowing us to shape the build around a CPU/GPU duo that is leading to a lot of excitement in the market right now; the Ryzen 5 3600 + RX 5700XT.

The direct successor to the Ryzen 5 2600 is the 6 core Ryzen 5 3600 and it’s a worthy one thanks to its 15% better IPC and improved clock speeds. The best things about the Ryzen 5 3600? It easily works on older B350, X370, B450 and X470 motherboards and it’s a sub-200$ CPU that performs better than the previous generation top of the line Ryzen 7 2700X (comparable multi-core and much improved single-core). For you and most other people in the market for the CPU of their gaming PC, you don’t need anything better than the Ryzen 5 3600; are there slightly better CPUs out there? Yes. The Ryzen 7 3700X and the Core i9 9900K both have more cores and slightly better gaming performance but at a very steep cost. The 3700X and 9900K are 60% and 130% more expensive respectively for just small percentages of better gaming performance.

If you are planning to game, do some content creation on the side and/or stream from time to time, there is no better value CPU than the Ryzen 5 3600 (the R5 2600 would be a close contender but the boost in performance from the 2600 to the 3600 makes it worth it).

Paired with this exceptional CPU comes the RX 5700 XT, the new Navi card from AMD which delivers groundbreaking performance for the $400 you can find it for. 1080p Ultra and 1440p Ultra is a breeze for this card and high refresh games will surely delight you with such powerful hardware.

You can also get similar components to the one in the list below; for example, there’s no issue if you get a Radeon RX 5700 XT from a different brand other than the one we featured. Just be careful, not all 5700 XT implementations are great and its best that you do some research on noise, performance and cooling before deciding for a different card, from a different company, rather than the one in the list. To view our in-depth comparisons of aftermarket GPU manufacturers, click here.

Released mid year in July of 2019, AMD brought an amazing performer for the high-end market. The Radeon 5700XT GPU is based on a completely new architecture called NAVI which promises great performance, scalability and an array of features never before seen in the company’s GPUs. Built on the brand new 7nm process, the power consumption values are great even with hefty over clocks and its performance is very close (within 5-10%) to the more expensive RTX 2070 Super. Both cards are amazing performers though but we fit the 5700XT in this build because it fits the budget better. The latter will deal with the latest titles @1440p with no problems and can even drive 144hz/entry-level 4K with some settings dialed down. Its truly a great work horse that will get better and better over time with software updates and architecture optimizations. Careful that some of its drivers have been reported to be unstable.

A rather important step-up in this build compared to our cheaper build guides is the MSI B450 Tomahawk MAX AM4 board. Since release, it has been praised over and over for its solid VRMs (Voltage Regulator Modules) and overall quality build.

This ~$110 mid-range B450 motherboard punches well above its weight in the performance category because it allows you to run big overclocks on your CPU without the need to worry about the motherboard parts. The BIOS is great as well and the support going forward is still ongoing. This specific one, the Tomahawk MAX, comes with the 3rd generation BIOS already flashed so you don’t need to worry about compatibility issues (found in older generation motherboards lacking BIOS flashback functionality) with the new Ryzen CPUs.

Overall, the MSI B450 Tomahawk is a great board that puts up a fight even with the top-end $200+ boards in the performance sector.

At this price point you can easily afford the fast and highly tweakable RAM featured in our build lists; meaning you’ll be able to mess with memory voltage to allow higher clocks and/or lower CL latency. Tweaking RAM is a lengthy process of trial and error but such memory sticks will make it easier for you. CPUs, especially the Ryzen series, love memory speed because it reduces access latency. This results in improved responsiveness, better average FPS and much better 1% and 0.1% minimum FPS – meaning that your gaming session will be smooth with no stutters; smoothness is enough of an argument to pay more for such memory modules and 16GB is still enough for this gaming oriented build.

Just make sure that if you also want to focus on video editing (so a workstation build), it would be better to get 2 sticks of 16GB (so a total of 32GB) from the get-go. You’ll not only future proof your PC but video editing is pretty intensive on RAM timeline previews; it eats memory alive! Getting dual channel memory for your builds (two identical RAM modules) is always a wise option!

The Crucial P1 M.2 SSD assures that everything loads as fast as possible; from games to applications and file transfers, this little but powerful guy will do and ask for more. NVME SSDs, like this one are starting to be preferred over classical SATA SSDs because they come with better sustained speeds and in very small form factors. Heating and lifetime should not be an issue.

For this $700 build, we can afford a great looking mid-tower PC case with tons of functionality. The Phanteks will certainly ‘wow’ you in areas like cooling performance, all-around looks and ease of setting up.

The Corsair RMx PSU is a first tier component that will provide sustained and constant current to your build. Its Gold certification and Full modularity are icings on the cake, allowing you to have an efficient power source with only the cables that you really need; no extras will crowd your case.