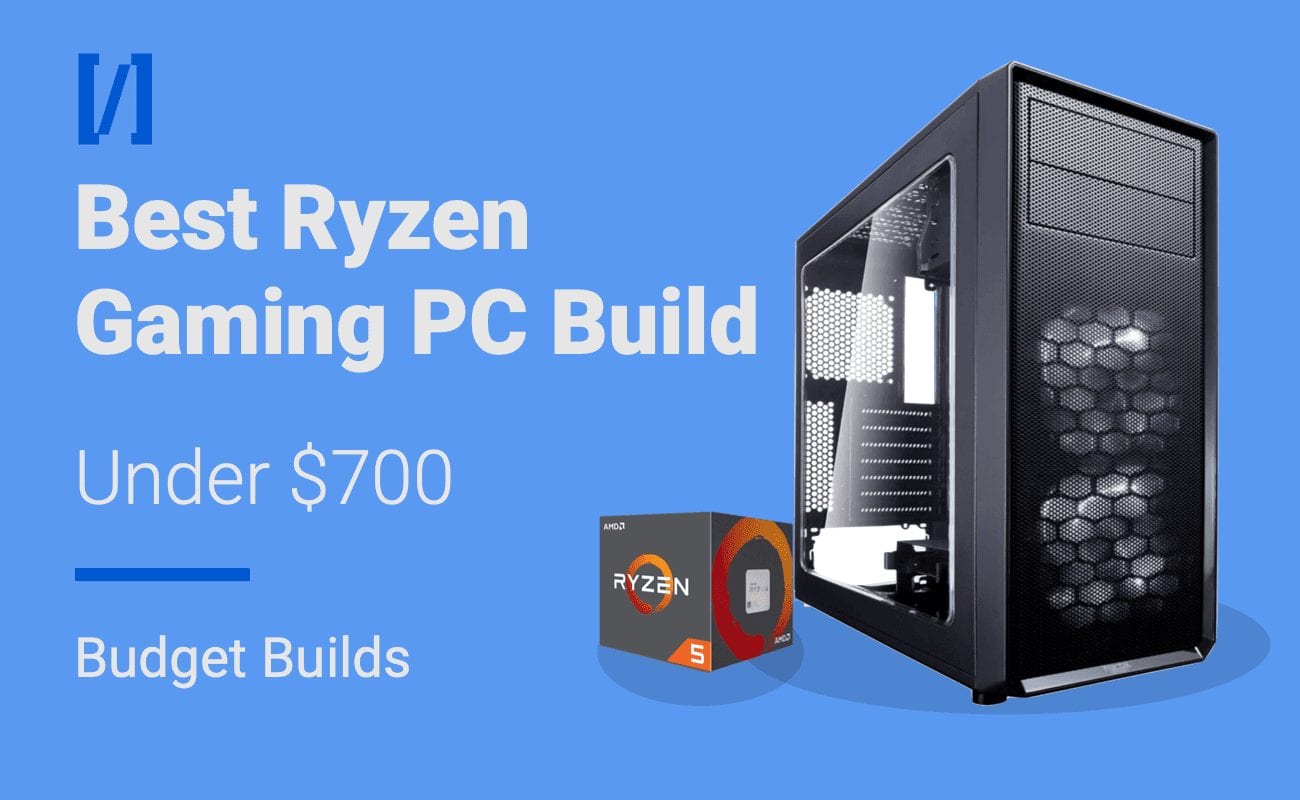 AMD quietly released a killer budget CPU at the back end of 2019. Termed the Ryzen 1600 ‘AF’ on account of the Product code changing from AE for 2018’s Zen Architecture Ryzen 1600, to this model which is Zen+. The TL;DR on this processor is that provided it’s cheaper than the Ryzen 2600, it should be your go-to CPU for all but the most price-conscious builds.

In this article I’ll give an overview of why the 1600AF is such great value and make a recommendation of a DIY PC Build that uses the CPU to Its maximum potential.

The original Ryzen 1600 ‘AE’ was based on a 14nm production process and the original Zen architecture. Whilst an impressive performer, the node size lead to more heat and less efficiency, keeping clock speeds low and preventing it from challenging the intel gaming CPU’s such as the i5-8400. Nevertheless it was a fine chip bringing 6 cores and 12 threads into the mainstream at a very affordable price.

So why then the 1600AF? Well, it’s best thought of as a Ryzen 2600 with lower stock clock speeds. It has been moved to the Zen+ 12nm architecture with the heat and efficiency benefits that that brings. Whilst the clock speed is stated to be lower like all Ryzen CPU’s provided you use a B450 chipset or better they can be overclocked. It’s not guaranteed, but it should be possible to hit 4Ghz+ on all but the unlucky chips which got bad silicon. You don’t even have to be a skilled overclocker to do it: Enabling PBO (Precision Boost Overdrive) and XFR2 (eXtreme Frequency Range 2) in BIOS will automatically overclock your chip to the best values it can achieve, safely.

AMD even includes Ryzen Master software to give you a native Windows application to overclock and test your CPU. That ability to extract maximum performance makes these CPU’s killer value. They even come bundled with a perfectly adequate wraith stealth cooler preventing the need to spend extra on an aftermarket solution.

Pricing has been variable as the CPU goes in and out of stock. Occasionally prices have even exceeded the Ryzen 2600 – in which case you should obviously opt for a 2600 instead which comes with a slightly better version of the Wraith Stealth and guaranteed 4Ghz Clock speed.

The Ryzen 1600AF will perform almost identically to the Ryzen 2600 – because it is a Ryzen 2600 to all intents and purposes. In almost all gaming PC’s the GPU will be the component that limits performance. You will only find the 1600AF holding up framerates in rare cases where performance is CPU bound – for example CS:GO or other games with simple graphics and high CPU demand. That said, performance will be completely acceptable across the board, with 6 cores and 12 threads.

This CPU is capable of running AAA titles such as Shadow of the Tomb Raider or GTA V at 90-100FPS given an adequate GPU pairing, whereas less demanding e-sports titles such as Overwatch and Fortnite comfortably exceed 144FPS to make maximum benefit of a high refresh rate monitor and slightly lowered graphics settings. Gaming frame rates will be down to your selected GPU’s performance in almost all cases, which is exactly as it should be.

Getting what you’re paying for:

The 1600AF has wholly replaced the original 1600AE because AMD is no longer fabricating CPU dies at 14nm, and yet felt the need to replace the now near 3-year-old Ryzen 1600 with a drop-in upgrade. That said, old stock will still be on shelves so it’s wise to double-check with any retailer that the SKU is ‘YD1600BBAFBOX’ which relates to the boxed retail version of the 1600AF including a cooler. Again, double-check pricing vs the Ryzen 2600 at time of purchase and if the Ryzen 5 2600 is cheaper, buy that instead!

So, now that we’ve explored the value offering of the Ryzen 1600AF I’ll recommend a system that absolutely maximises the value on offer. This PC is aimed at fantastic all-round performance but targets 1080p gaming. This is the sensible benchmark to aim for if funds are limited but you want an exceptional gaming experience. Rest assured this PC will also take general tasks and even more taxing productivity tasks such as light video editing, photo editing and basic music production in its stride. The glory of a 6 core CPU at under $100 is that it makes for an outstanding all-rounder PC.

This CPU is, of course, the focus of the article and sets the theme of the build as maximum value without performance compromises. The 1600AF ships with a bundled cooler and pre-applied thermal paste saving another $20-$30 in total system costs. It requires a B450 chipset motherboard to allow overclocking with the opportunistic algorithms provided by AMD as well as dual channel ram with reasonably fast timings so those are the components we’ll be looking for next.

This relatively bare-bones motherboard gets the job done. It’s a ‘Max’ version and so ships with a BIOS that’s Ryzen 3000 (Zen 2) compatible (so no need for BIOS flashback), to smooth the upgrade path should you wish to upgrade to a used 3700X or similar in the future. It has just 2 RAM slots and an M.2 slot but provides all the functionality required and acceptably good Voltage Regulation Modules to extract maximum performance from the 1600AF. If you think a RAM upgrade might be necessary in the future, a few dollars extra on a Motherboard with 4 slots may be a good consideration – the Asus B450m TUF Gaming is a good motherboard in this case.

Ram speed is important to Ryzen Architecture, but the Zen+ Memory controller runs at 2933mhz making anything much above 3200mhz a gamble as to whether it will run stably. Using dual-channel ram is of utmost importance however, making a matched kit of 16Gb in two 8Gb sticks a must. It’s a few dollars more than the very cheapest kits but has CAS16 latency and decent sub timings, all of which will help you get the most from your bargain CPU. 16Gb is plenty for virtually all games and allows enough RAM for multi-tasking and productivity work too.

NVME drives have come of age and this high-performance drive from Western Digital is just a few dollars more than the cheapest of SATA SSD’s. It boasts blazing-fast read/write speeds and high-quality TLC NAND for good durability. 500Gb is plenty for Windows and a good handful of applications and games. A simple 2Tb Hard Drive is a straight forwards addition to this system for media and data storage. If you feel 500 Gb is too little, the 1tb Crucial P1 is available at just over $100 and makes an excellent general purpose drive, although with QLC NAND it is somewhat slower and less durable than the SN550. It is, however, excellent for gaming and general use.

As stated before, with ample performance from the Ryzen 1600AF it is the GPU that dictates the gaming performance of this system. The Nvidia GTX 1660 Super is still the mid-range king. The ‘Super’ refresh saw the GTX 1660 upgraded with GDDR6 Vram which boosted performance to 1660 Ti levels, but at a lower price point. This GPU is aimed squarely at excellent 1080p performance and will impress with luscious visuals in AAA titles whilst being able to crank out high framerates for e-sports and first person shooters. It includes the NVENC hardware encoder so you can encode streams with minimal system overhead. This Zotac GTX 1660 Super Twin Fan AIB model offers excellent value at $240 and good thermal performance as well as versatile video outputs.

The case is a matter for personal preference, with virtually any mATX or ATX mid-tower case being sufficient for this build. I’ve opted for the Fractal Design Focus G due to its mesh front panel and good build quality. Two included fans mean that you won’t need to spend extra on cooling, and it has external drive bays which may be useful for legacy optical drives. At $58 this is a case offering impressive value – but feel free to opt for an NZXT H510 at $70 or any number of other cases to suit your needs and chosen aesthetic.

Power Supplies a component that has suffered turbulent pricing and availability from trade wars to COvid-19. This is unavoidable since many of them originate in China. Right now the Cooler Masterwatt 550W is a good option for $80. It offers plenty of power for this system and semi-modular design keeps cables to a minimum and the system and build neat and tidy. 80+ Bronze is the minimum efficiency standard we should be looking for and it includes fanless operation at light loads and a 5-year warranty.

Conclusion: An excellent gaming PC at $700

With the Ryzen 1600AF allowing you to buy into very high performance at under $100, it’s now possible to self build an excellent all-round PC for $700 that will play all current titles well at 1080p. The intention is that paired with a good quality 1080p 144hz monitor and peripherals, you can get a versatile set up capable of gaming for well under $1000.