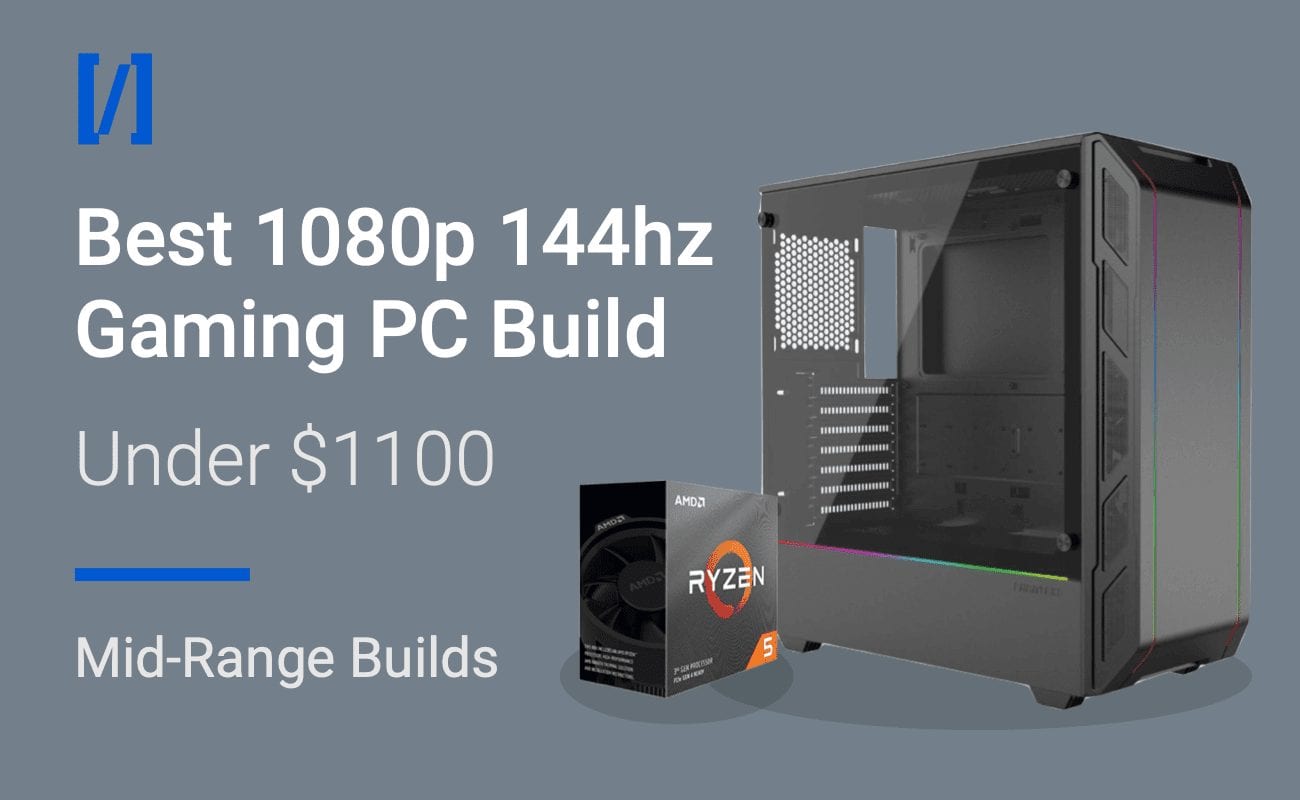 1080p or ‘Full HD’ is the starting point for a great gaming build – but it shouldn’t be considered entry-level. For many gamers running 1080p resolution has an advantage beyond the value it offers: With relatively inexpensive GPUs a carefully specified system can offer high frame rates. High FPS means a rewarding and fluid experience, but for competitive e-sports players pushing frames can mean you see an opportunity a split second before an opponent does – and that can equate to a competitive edge. In this article Premium Builds recommend a versatile 1080p/144hz gaming machine that can be built for $1000/£1000 and will satisfy the needs of general-purpose players and hardcore competitive gamers alike.

The demands of 1080p 144hz gaming are perhaps counter-intuitive. There are two factors that must be balanced: The Graphics Processor needs to be powerful enough to render the frames, but the CPU has to be powerful enough to compute the game data to produce them! Unless the core of the system can run the game engine towards or past 144fps, you won’t be maximising the refresh rate of the monitor. For this reason, a 144hz capable system needs a strong CPU irrespective of its target resolution, whilst one of several mid-range GPU options will supply the rendering horsepower.

The luxury of competitive e-sports is that you can always lessen the burden on the GPU by lowering graphical quality settings to boost performance: Indeed you’ll struggle to find a winning e-sports player who doesn’t run bare minimum graphical settings. But don’t worry – the system we’re recommending here is more than capable of doing both fast AND pretty! Expect excellent performance on high or even ultra settings with this build at 1080p resolution. It’s worth managing expectations at this point: There are plenty of games at no current system will run at or past 144fps. Demanding AAA titles like Monster Hunter World or Shadow of the Tomb Raider won’t reach that speed no matter how much processor you throw at them. Some games are simply poorly optimised, and they’ll struggle too (PUBG or Assassins Creed Odyssey, for example).

Thankfully, e-sports title developers know that fast frame times are key to a fluid and thrilling experience so stalwarts like Apex Legends, Overwatch, Rocket League and even Fortnite will, given the right system, run to very high frame rates. We’d recommend pairing this build with a 144hz monitor with FreeSync capability. With this technology matching the monitor refresh to the GPU output on a frame by frame basis you’ll experience smooth gameplay without screen tearing even on games where the magic 144fps isn’t attainable.

This system uses the huge value and performance of the Zen 2 AMD Ryzen processors at its core. There’s little on the market to challenge the Ryzen 5 3600 right now, and with 6 cores and 12 threads it’s sure to remain capable for years to come. The $50 more expensive 3600X promises 200mhz higher clock speeds – but the reality in this iteration is that there’s barely any performance difference and certainly not enough to warrant the additional spend. Just 3 months ago we’d have been recommending the intel i5-9600K for a high FPS build, but the Ryzen 3600 has it matched in frame rates and well and truly beaten for versatility and value, making it the clear choice. The inclusion of the Wraith Stealth cooler cements its value.

The MSI Tomahawk established itself as a firm favourite for the Ryzen 2600, but the transition to the Ryzen 3000 series has prompted MSI to release the revised ‘B450 Tomahawk MAX’ version. This motherboard comes with rock solid CPU power delivery hardware and Ryzen 3000 ready BIOS. It’s compatible with a wide variety of ram and has a rugged ‘Arsenal’ themed aesthetic.

Ryzen CPUs have always been RAM sensitive owing to the ‘infinity fabric’ architecture. The Ryzen 3000 series is no different with a good correlation between performance and RAM speed. There’s a balancing act though: Whilst select RAM kits may allow 3600mhz or even 4133mhz overclocks they’re hard to find and incredibly expensive. With performance gains in the realms of single percentage points, it is not a cost-effective means of boosting performance. We’re left looking for high-quality RAM on the Qualified Vendor List of the motherboard and balancing price and performance. The Kingston Hyper X Predator Ram kit (and yes, this specific SKU as checked against the QVL for the MSI Tomahawk B450 MAX) fits the bill perfectly whilst not costing the earth. 16Gb is more than adequate for current titles, and Dual-channel mode is essential for optimised RAM performance.

We’re nearing the end of the spinning platter: Ever since vendors broke through the SATA interface bottleneck, and then began offering bulk storage drives with low cost per Gb Storage and high speeds the writing was on the wall for traditional mechanical Hard Disks. The last 18 months has seen a wealth of consumer SSD’s hit the market promising high speeds and good value. The Intel 660p 1Tb NVME M.2 SSD is aimed squarely at the general use market. It’s not the fastest NVME SSD by quite some margin, but that doesn’t stop it being more than fast enough for general and gaming use.

The price point is nearly unbeatable, although the Cruical P1 which uses the same controller and NAND has dipped below in pricing recently. For a gaming PC, this drive is all you need. If you intend to capture gameplay footage, edit video, or manipulate large files on a regular basis, you may find a MLC based NVME Drive such as the Sabrent Rocket, Corsair MP510, HP EX 920, or ADATA SX8200 Pro meet better meets your needs. All are available for around £130/$150 for a 1Tb drive.

AMD’s Navi GPUs came to market this summer riding a wave of hype – and quickly crashed to shore with a $50 price drop to ensure they remained competitive with Nvidia’s refreshed ‘RTX SUPER’ line up. Navi takes the brute horsepower of the VEGA predecessors and addresses some of the issues those GPU’s posed, namely high power consumption and heat output. We’re left with a fantastic offering to drive 1080p at high FPS in the AMD Radeon RX 5700 GPU.

AMD’s partners are now offering GPU’s with axial coolers and it’s one of the first to market, the Sapphire Pulse, that we recommend in this build. It performs at least on par with the $50-$100 more expensive RTX 2060 SUPER although it trades blows depending on the game engine – some simply favour NVIDIA. Sapphire is a long-standing AMD partner and trusted manufacturer of GPUs. This cooler design promises 10dBa Sound reduction (that’s huge!) and cooler temperatures than the blower versions of the card. AMD has even addressed competitive gaming with technology that claims a 30% reduction in input lag. If you’re aiming for a 1080p system at the $1000/£1000 price point the RX 5700 – in non-blower format – is the GPU for you.

Every system deserves a decent case. It protects your expensive components whilst providing adequate airflow, and of course it defines the look of the whole build. Quality cases also help keep a system quiet.

For this system we’ve opted for the Phanteks Eclipse P350X. Phanteks are a premium case manufacturer and despite a low $70 price point, this case has all the features you need: A PSU shroud and tempered glass side window keep things looking neat. It has a slick black finish with discreet RGB accents – which sync with MSI mystic sync on the Tomahawk motherboard. Dust filters prevent unsightly build up inside the case and are removable for easy cleaning whilst slide-out drive caddies make fitting 3.5” bulk storage drives a cinch. It is supplied with one 120mm fan: We’d recommend supplementing this with a pair of 140mm PWM fans in front such as the BeQuiet! SilentWings 2 to ensure ample airflow into the case, whilst the supplied 120mm fan can take care of exhaust at the top rear position.

AMD’s new generation of CPU’s and GPU’s have brought incredible efficiency improvements. This means that we don’t have to over-specify a power supply. The unit chosen here, the SeaSonic Focus 650 Gold offers fanless mode for quiet operation when power demands are low. It’s gold-rated for high efficiency and Seasonic Back it with an outstanding 10-year warranty. With 650W it offers enough headroom for component upgrades if you choose to add a more power-hungry CPU or GPU in the future. At $100 this power supply forms a solid backbone for the system – This PSU will probably power your next build as well as this one!

So, that concludes PremiumBuilds’ recommendation for a high performance 1080p gaming machine. With the current best in class CPU and GPU and a host of strong supporting components, this system will provide top-flight entertainment for years to come without breaking the bank.