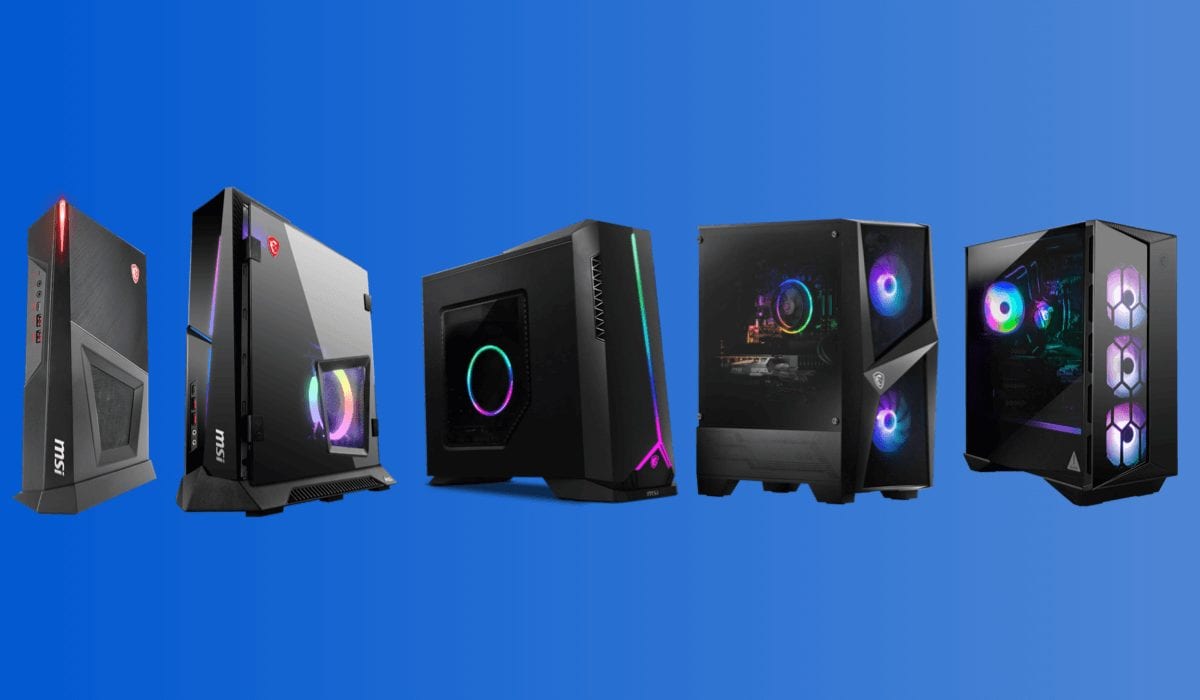 MSI has just revealed some of their Intel 10th Generation ‘Comet Lake‘ gaming desktops with new Trident, Codex, and Aegis lines, including a new Walmart exclusive Special Edition Aegis PC tailored for young or inexperienced builders interested in starting their PC gaming journey. While the stars of the show are their SFF Trident desktops, MSI has an excellent spread of performance and size options, suitable for all sensibilities, that will all be available by the end of July. If you’ve been thinking about finally getting into PC gaming, or about downsizing from a standard desktop, there’s plenty of fabulous picks here for you.

The case options are all quite sharp, ranging from 4.7 to 47 liters, and each one includes an install of 64-bit Windows 10 Home, a VIGOR GK30 RGB gaming keyboard, and a Clutch GM11 RGB gaming mouse, wholly covered with a limited 1-year warranty. All of MSI’s 10th Gen gaming desktops also come equipped with some form of wireless and Bluetooth connectivity, their hub software MSI Dragon Center, and at least some sort of RGB LED lighting. Also, the systems are assembled in the USA! Now, let’s have a look.

Further reinforcing the recent and massive spike in popularity of small form factor (SFF) PCs, MSI has graced us with the MPG Trident 3 10th. At just 4.7 liters, with the ability to cram an NVIDIA GeForce RTX 2060 Super, an 8-core i7-10700F, 16GB (2x8GB) DDR4-2400MHz of memory, an M.2 NVMe SSD, and a 2.5” SATA drive, there’s not much this little guy can’t handle, especially @ 1080p. If you’re looking for something extremely portable, the MPG Trident 3 is positively pocket-sized. As we mentioned previously, memory is user-upgradeable, but you’re limited to 2x DIMM slots. So, keep that in mind if you ever decide that you need to open more than a single tab of Google Chrome 😊.

The MEG Trident X 10th is the Trident 3’s much older brother, and he just returned home from an overseas deployment. While it’s not their smallest desktop in this lineup, the Trident X is by far the most capable. If you want an absolute SFF powerhouse with a Core i9-10900K, NVIDIA GeForce RTX 2080 Ti, and up to 64GB (2x32GB) DDR4-2666MHz of memory with 2TB (1x M.2 + 1x 2.5” SATA) of storage, then this guy’s got your back. The Trident X has spectacular space optimization thanks to the split-chamber design it has adopted from many of the most popular premium SFF cases, so the CPU, GPU, and PSU all have separate compartments with dedicated airflow. With support for the most powerful gaming components, an actively cooled base-stand, overall sleek design, and ventilated tempered glass side-panel, MSI genuinely deserves to call the Trident X “the centerpiece of gaming.”

The Aegis SE 10th is the least powerful and most affordable machine from MSI’s new desktops, but “budget” thankfully doesn’t have to look bad. The Aegis SE provides the same amount of style-points you’d get with any of their other machines, goes easy on your wallet, and leaves you plenty of room for future upgrades. Although, with an NVIDIA GeForce GTX 1660 Super, 240GB 2.5” SATA SSD + 1TB 3.5” HDD, and 1 x 8GB DDR4-2933MHz of memory, you really won’t have much room to complain at this price. You may not be doing much multitasking or any productivity work, but you’ll get stable performance in all of the popular esports titles nowadays while you save up for your new RAM or CPU.

With the Codex R 10th, we return to familiar territory. The Codex R is a “no-frills,” mid-range gaming PC inside yet another beautiful enclosure, this time with a full tempered glass side-panel. With the added benefit of USB Type-C, and the ability to choose a Core i7-10700F, NVIDIA GeForce RTX 2060 6GB, and 16GB (2x8GB) DDR4-3000MHz memory, it’s hard to ask much more from a system given its price. This case is probably my favorite of the bunch and will make a stellar foundation for your future no-holds-barred battle station.

The Aegis R 10this the middle child in this family. While it shares the same enclosure with our next, and final, PC for today, it’s the slightly shorter mATX version with marginally worse specs. Here you can opt for either an NVIDIA GeForce RTX 2070 Super or an NVIDIA GeForce RTX 2060 Super, which is a relatively small step above the Codex R. If you’re not concerned with the difference between a 2060 and a 2060 Super, the decision ultimately comes down to which case you prefer. They’re both steel and tempered glass, and they’re honestly both gorgeous, so flip a coin perhaps.

Finally, we arrive at the Aegis RS 10th, the “big boy” computer around these parts. While the Aegis RS may be limited to an NVIDIA GeForce RTX 2080 Super and only 32GB (4x8GB) DDR4-3000MHz of memory compared to the options available with the snooty Trident X, it can still come equipped with a Core i9-10900KF. You’re also getting the only full-sized ATX platform in this group, again with steel and tempered glass construction, on top of a custom MSI AIO liquid cooler (with RGB, of course) for your CPU. The Aegis RS is arguably the best option if you plan to build in whatever case you end up with for the next few years, and you could opt for the least expensive configuration in anticipation of future upgrades or new hardware launches.

In our opinion, as far as system integrators go, MSI has some of the most compelling build choices and pricing on the market, especially considering their case designs. Even the most entry-level options have a flair for style, and that’s something many people who might be looking to enter the PC market will appreciate.