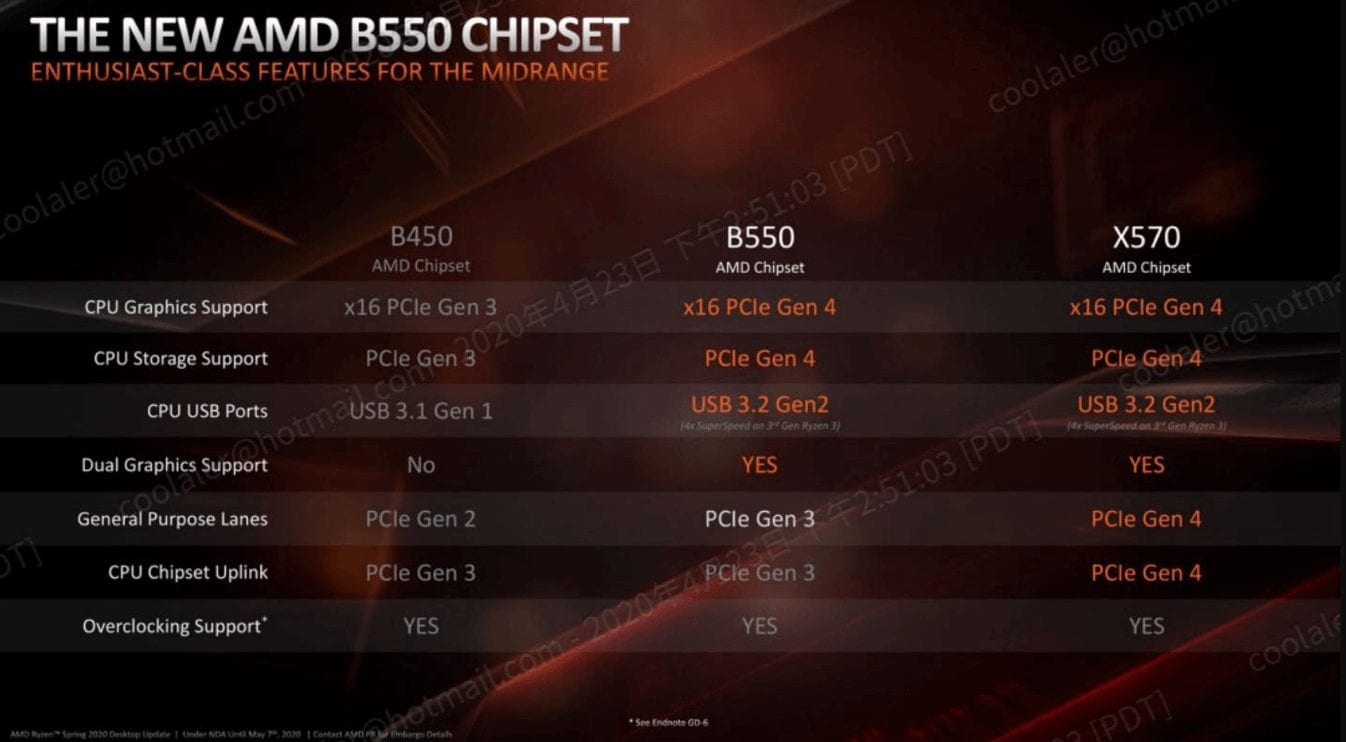 AMD’s B550 chipset is now available for purchase, pending retailer stock, of course, and we’re left with a very intriguing dynamic in the Ryzen motherboard market between it, its predecessor, the B450, and the X570.

While the B450 chipset was very successful and the better options are still capable of adequately driving Zen 2 and the upcoming Zen 2 Matisse Refresh, it has been growing more scarce, and expensive, leading up to the release of the B550 chipset. Now, this scarcity is at least partially due to recent global events (regarding both health and trade), which have negatively impacted electronics’ pricing and availability across the board. However…

For better or worse, hardware manufacturers are businesses; they do still have to make money, and they’re going to want you to buy their newest products. While B450 hasn’t reached end-of-life yet, it is fast approaching when you consider the rollout of the new B550 chipset, let alone the impending launch of AMD’s Zen 3 Ryzen 4000 CPUs which will, by and large, be mostly supported by AMD’s 500-series chipsets and above. Although 400-series chipset manufacturers can elect to provide beta BIOS updates to allow support for Zen 3, this will remove support for older generation Ryzen CPUs due to the finite nature of Nonvolatile BIOS memory. Essentially, there’s a list of CPUs that can be supported by your BIOS stored on the motherboard itself, which can only be so long, and there’s no going back after deciding to flash a beta BIOS.

Understandably, many users looking to build their first AMD system, or those looking to upgrade, are then faced with a tough question: “which motherboard chipset should I buy?” To help you answer that question today, we’re going to dive into the new B550 chipset and explain the differences between it and the X570, as well as some highlights in comparison to the B450 to help you decide which option best suits your needs.

First and foremost, the B550 chipset offers PCIe 4.0×16 support for the primary PCIe and M.2 expansion slots, as well as your system memory. While we’re likely still quite far off from needing the improved PCIe bandwidth, even for a monstrous GPU like the NVIDIA Titan RTX, having PCIe 4.0 means you’ll get to take advantage of both Gen4 M.2 NVMe SSDs and USB 3.2 Gen 2. Double the bandwidth, double the fun! Although, something you need to keep in mind if you’re curious about the B550 is that you must use, at minimum, a current-gen Zen 2 Ryzen 3000 CPU, not to be confused with the Zen+ Ryzen 3000G APUs.

Now, the crucial difference between B550 and X570 is that B550 boards possess a PCIe 3.0×4 link between the CPU and chipset, which can only handle so much throughput – meaning manufacturers must sacrifice certain features in favor of others. For example, opting for Wi-Fi 6 and Bluetooth 5.1 support, 2.5G LAN, and USB 3.2 Gen 2/Type-C internal headers for front case I/Os may mean restricted USB support for the rear I/O. Even the number of available (a)RGB and PWM fan headers on the motherboard come into play. The PCIe 3.0 link is simply not enough to run a plethora of high-speed connectivity features simultaneously without bottlenecking. So, these restrictions are something to consider if you want to pick up a B550 motherboard, but also need a significant amount of USB 3.1 Gen 1, at which point you should think about snagging a PCIe 3.0 USB expansion card. Note, perhaps one of the biggest perks to having PCIe 3.0 for the chipset, instead of 4.0, is the lack of active chipset cooling. No active chipset cooling means no additional points of failure or noise sources in your build, which, for some, are a dealbreaker with X570.

B550 also features support for AMD CrossFire and NVIDIA SLI, but to be perfectly frank…  These are dying technologies, suffocated by the very companies that implemented them due to the ultra-powerful performance of individual GPUs over the past few generations, and the visionaries who pioneered them have long since left their respective positions with both NVIDIA and AMD. Also, while they’re not entirely useless, SLI and CrossFire are best leveraged mostly by those who spend their time competing for leaderboard rankings in extreme overclocking benchmarks. Unfortunately, fewer and fewer games support multi-GPU configurations nowadays, the ever-rising prices for single GPUs make them insanely cost-prohibitive, and due to the aforementioned performance offered by even mid-range cards, they’re just not necessary.

The final key area where solid B550 boards have separated themselves is with their VRM performance. We’re not merely getting B450 boards with PCIe 4.0 and a few small tweaks; instead, we’re getting mature VRM designs with excellent thermal performance on par with even some of the most premium X570 platforms. For example, in Hardware Unboxed’s B550 VRM benchmarking, they found that the Gigabyte B550 Aorus Master’s VRM thermal performance matched that of the Gigabyte X570 Aorus Xtreme, as it has the same VRM layout, but costs 50% less when viewing current prices on Newegg. Note, this example is a bit of an outlier. While VRM performance looks promising across the board, the biggest conundrum when it comes to B550 is pricing, where a large portion of B550 and X570 motherboards are nearly identical. Because B550 is overall much higher quality compared to B450, and genuinely competes with X570 in many aspects, we see significant price premiums, at least shortly after release. It is likely that as the demand for B550 motherboards dies down throughout the year, we’ll see pricing drop accordingly as well.

With all of that out of the way, what does the X570 have to offer? Not only does the X570 sport superior connectivity thanks to its PCIe 4.0×4 chipset link, but you also have the option to socket any Ryzen CPU from Zen+ through the upcoming Zen 3. Meaning you’re only unable to use first-generation Zen Ryzen CPUs and APUs.

So should you go with B550 or X570? Well, that largely depends on your use-case, so we’ll list some examples for each to give you a general idea.

View our Best B550 Motherboard Guide

Wait! Whether you’re in the market for your first PC or if you’re itching to upgrade, wait. Not only is Zen 3 just around the corner, but as we said before, the prices for B550 motherboards will likely drop over the coming months as demand dies down. If you can find a good deal, and you want to be ready for AMD’s latest and greatest, then, by all means, upgrade. However, if your machine is running just fine, or if you haven’t built one yet, you don’t want to give yourself a case of buyer’s remorse!

Finally, a quick word regarding the B450: considering the issues with current pricing and availability, inferior VRM performance, lack of PCIe 4.0, PCIe 2.0 opposed to PCIe 3.0 for general purpose lanes, and uncertain support for Zen 3, we wouldn’t recommend opting for a new B450 motherboard. Furthermore, if you have the option, we’d recommend upgrading to a B550 chipset if you’re at all interested in upgrading to Zen 3. You may have the opportunity to flash a beta BIOS if your particular manufacturer releases one for your board, but you’ll be missing out on nearly all of the features of Zen 3. That said, if you do receive a beta BIOS update, you can at least use your B450 as a stopgap to space out your CPU and motherboard purchases. Just be aware that you could potentially run into system stability issues depending on how “beta” those updates are.

The current AMD motherboard market is indeed a bit odd, and we have a somewhat confusing spectrum of choices thanks to AMD’s long-term support for the AM4 socket. While we’re all curious as to how well the beta BIOS updates will work for 400-series boards and Zen 3, it’s very intriguing that the B550 lineup is more of a slightly less expensive X570 rather than a true “budget” offering. AMD has kept their promise not to replace AM4 through 2020, and the B550 may be its death knell, considering it will likely only support Zen 2 and Zen 3.

What do you make of the new B550 options? Would you be willing to experiment with Zen 3 on a 400-series motherboard? Are you excited about the Ryzen 4000 processors? Let us know in the comments below, and as always, thanks for reading!