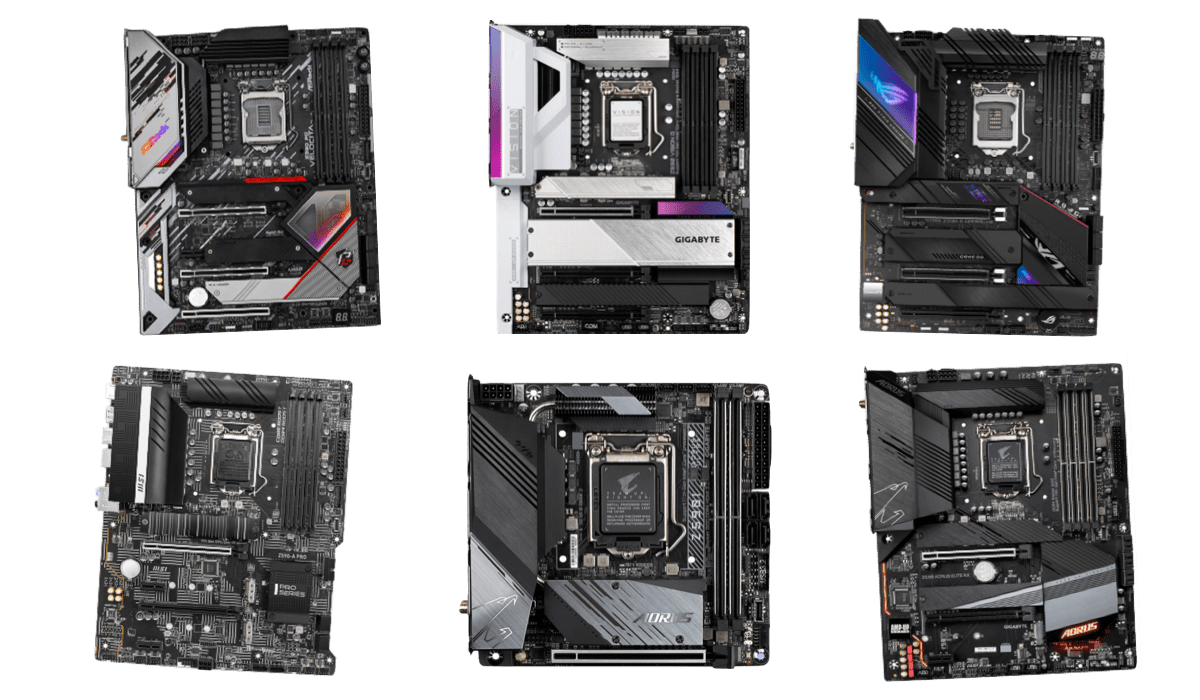 Intel’s newest 11th generation CPUs, ‘Rocket Lake’ require motherboards with their latest chipsets to function. The Z590 chipset is top of the line and allows full CPU and memory overclocking on K series CPUs, as well as memory overclocking on non-K CPUs. These motherboards make full use of the Z590 specification to provide 20+4 PCIe 4.0 lanes for the GPU and main SSD (though PCIe 3.0 SSDs will work just fine), whilst other nice to have features like integrated Intel networking boost the spec sheet. They’re not cheap, however: Running these power-hungry CPUs demands top-flight power delivery circuitry and Z590 motherboards command a significant price premium. In this article, we’ll recommend the best options for a range of needs, including to keep costs down or if you want to extract the most from a new Rocket Lake CPU – such as the i5-11400, i5-11600K, i7-11700K and i9-11900K.

Gigabyte has been impressing us with the balance of specification, performance and price on Intel chipset motherboards for several generations now. The Z590 line up is no exception. This mid-range board, the Z590 AORUS Elite AX, boasts a suite of features that make it our go-to recommendation. It has strong 12+1 Phase 60 Amp VRMS and extensive and attractive heatsinking, 3 M.2 slots with the top one direct to the CPU (11th gen only), four armoured RAM slots and two full-length PCIe Slots. For networking, there’s integrated WiFI 6 and 2.5Gb Ethernet. The audio solution is a higher-end ALC 1220 Codec, with full audio output on the back panel. USB is covered with 8 rear ports, and a USB 3.2 Gen2 Type C front panel connector – so ensure your case is compatible. It also has Q flash for easy BIOS updates and a full complement of configurable fan and RGB headers. The aesthetics are on point with attractive anodized heat sinking and discrete RGB elements. Overall this board covers all the bases and packs a great feature list into its $240 asking price.

Gigabyte also takes our recommendation for the best mini-ITX Z590 board for SFF builds with the Z590I AORUS Ultra. Not only is it significantly cheaper than the alternatives at $280, it beasts some of them out for specification. Despite its diminutive size, it packs in an impressive 10 phase VRM with 90 Amp Power Stages, capable of running even the 11900K to full potential. There’s also a neat heat pipe and fin stack to keep VRMs cool. A pair of M.2 slots give versatile storage options with the main front slot being PCIe 4.0 and there are 4 SATA ports too. The single PCIe Slot is ‘armour plated’ to help it cope with the stresses of large GPUs, as are the memory and power connector sockets. As with all mITX motherboards, there’s integrated Wi-Fi and 2.5Gb Ethernet, and they’ve squeezed in Displayport and HDMI outputs as well as USB-C and 7 other USB A ports on the rear panel. Audio is rounded out with the ALC 1220 Codec for good performance and features there too. Aesthetics are clean and classy with black anodization and burnished highlights, with only an RGB AORUS eagle highlighting the brand.

If you’re looking for an mITX Z590 board this option offers great specification, and the price point makes the more expensive competition look like bad value.

Whilst the price tag may not scream ‘class-leading performance’, a deeper look at the spec sheet highlights the ASRock Z590 PG Velocita as a wolf in sheep’s clothing. There’s everything you’d expect of a high-end overclockers motherboard on offer here.

This Z590 motherboard has a 14+1 phase DrMOS power delivery system with 60Amp chokes – capable of delivering well over 700W of power to a CPU. Thermal control is managed by a chunky and heavily ventilated pair of heatsinks connected by a heatpipe, and there’s even a 30mm fan supplied to actively cool the heatsinks in extended overclocking sessions – though it’s probably noisy enough you wouldn’t want to run it 24/7, with such efficient and extensive VRM design there’s no need to use it for general use. This forms the foundation of a very solid overclockers board. Enhancing the OC credentials, there’s onboard power and reset switches for ease of use on a test bench or partially built system, whilst a full LED diagnostic display helps you track down boot or running issues with ease. There’s even a pair of full 8 pin CPU power connectors for over 300W total delivery to the CPU. The Z590 motherboard is full-featured and doesn’t skimp in more general specifications either, with Wi-Fi 6, three full-length PCIe slots, three m.2 slots and a comprehensive selection of ports on the rear I/O panel. They’ve even integrated a GPU holder that supports the front edge of the card to limit the stress on the PCIe slot. ASRock has squeezed an impressive amount of functionality in at this price point, and we have no doubt that this board is as capable as any when it comes to squeezing the most out of a Z590 compatible CPU.

MSI’s A-Pro is the more discreet and focused products in their line-up, aimed at a function over form rather than a gamer aesthetic. The Z590-A Pro hits all the core specifications without diverting money to RGB or other frivolities.

The capable 12+1 Phase power stages and heat sinking ensures you can run any 10th or 11th Gen CPU to its full potential. There’s a pair of full-length PCIe Slots and a second pair of x1 slots for expansion cards. Three M.2 slots (top slot is 11th Gen CPU only) and 6 SATA ports take care of storage – though as with all Z590 motherboards it pays to pay attention to which exact combinations of PCIe slots, M.2 slots and SATA ports are active depending on your proposed system configuration. There’s an inbuilt 2.5Gb LAN, and a reasonable if unexciting ALC 987 audio chip providing 7.1 channel audio output. To take care of cooling there’s an impressive six fan headers and one water cooling pump header. It also has a BIOS flash button, a useful addition for system upgrades. In conclusion, this motherboard is one of the cheapest options for the Z590 chipset but makes a perfect basis for a productivity or budget gaming rig where bang-for-buck matters.

ASUS’s Z590 lineup includes the ROG Strix Z590-E, which is their top tier board before you get to the incredibly expensive ROG MAXIMUS XIII Hero – a board which we have used to test the 11th generation flagship.

The Z590-E gets you most of that boards functionality at $120 less, whilst retaining the aggressive all black looks and ROG Styling as well as premium features.

The VRM is gloriously overkilled with 14 phases 70 Amp power stages, a heat pipe and chunky finned heatsinks – and it even includes a fan and bracket to concentrate airflow over the VRMs for additional cooling when pushing power-hungry CPUs to the limits. The m.2 heatsinks sandwich drives between a pair of thermal pads and keep temperatures incredibly low – we’ve not seen drive temperatures exceed 40C with this design, and there are 4 Slots total (One is 11th gen only, another shares bandwidth with the main PCIe slot when active, so choose your drive configuration with care). An integrated clear CMOS button helps you reset when testing settings to the limits, whilst a LED Code output helps troubleshooting during set up or testing. There’s a broad range of qualified RAM on the compatibility lists for this Z590 motherboard and we’ve found its bigger brother forgiving of higher speeds and aggressive RAM timings to find those last few per cent of performance from tweaking for optimisations. There’s no denying it’s a great looking motherboard as well, one that will integrate perfectly with most enthusiast Rocket Lake PC builds.

Gigabytes new ‘Vision’ line is aimed at content creators, but they’ve accented the boards with the cleanest white and silver aesthetic available in Z590 format, with the Z590 Vision G being our pick. These slick motherboards have a high-end VRM solution, including extensive heat sinking so you can run any 10th or 11th generation CPU with the confidence it will be performing at its best. There are four M.2 slots (primary PCIe 4.0 slot 11th gen CPU only) and three full-length PCIe slots available with the main one being PCIe 4.0. To control RGB there’s 2 RGB headers plus two more addressable headers, and integrated discrete RGB on the board itself as well. It also provides a good selection of fan, CPU fan and pump headers for you to customise a comprehensive cooling solution. The stand-out styling and full feature set mark this Z590 motherboard out as the one to get for a build that performs every bit as good as it looks and means you can build a beautiful white PC, without compromising on features or performance.