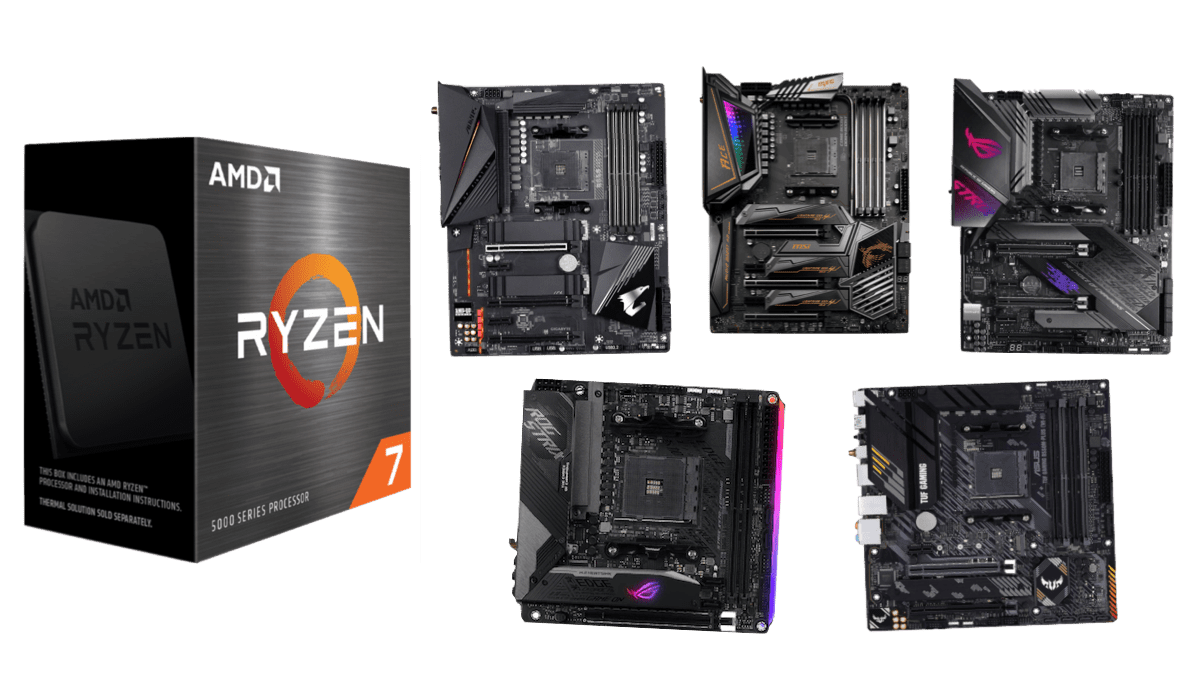 To put things bluntly, Intel should be pretty shook by the upcoming Zen 3 processors from AMD, especially considering the Ryzen 7 5800X. There’s still no telling if Zen 3 will have any worthwhile overclocking headroom to speak of, but even if the eight-core/sixteen thread 5800X is flat out incapable of boosting past 4.7GHz, it spells trouble for Intel’s current flagship 10900K.

AMD has boasted roughly 20% instructions per clock (IPC) improvement for Zen 3 over Zen 2 thanks to their new architecture and L3 cache restructure. This means that, despite the 5800X having fewer cores and slower clock speeds than the 10900K, it may not matter in the face of superior technology on a smaller process. Worst of all, for Intel, the 5800X will be nearly $100 cheaper than the 10900K.

Even though we’re due for an announcement of Intel’s 11th Generation CPUs, the fact that they’re still stuck on 14nm, compared to AMD on 7nm, there’s no guarantee that Intel will be able to maintain their last bastion: gaming performance. AMD isn’t pulling any punches, and they may very well end up with another crown.

Of course, we will have to wait until Zen 3 and Rocket Lake are both out (and Intel is holding off until next year) to see how they truly stack up. Regardless, the 5800X might not be the guaranteed best bet, but it’s guaranteed to be a damn good one. So if you’re placing that bet, today we’re going to help you also place your order for the best motherboards depending on your preferred style of build.

Perhaps you’re not only eyeing a brand new 5800X, but you’re interested in a brand-new chipset as well. Thanks to B550, builders have the option to save a bit of money (or opt-out of the slightly more extensive PCIe 4.0 and connectivity support) they’d potentially waste on an X570 platform. That is where the Gigabyte B550 Aorus Pro AC comes in!

B550 motherboards are somewhat restrictive due to having only a PCIe 3.0 link between the CPU and chipset, where X570 has PCIe 4.0. While you still get PCIe 4.0 lanes from your CPU, the lower bandwidth PCIe 3.0 chipset link forces motherboard manufacturers to sacrifice some features in favor of others, chief among them being rear I/O USB connectivity. Some B550 motherboards only have a total of 5 USB ports on their rear I/O, with maybe a couple of USB 3.2 Gen 2 or Gen 1 ports. However, a handful of B550 boards prioritize the rear I/O, especially the B550 Aorus Pro AC, which is usually the deciding factor when determining the best B550 options.

At $190, the B550 Aorus Pro AC manages to pack some impressive connectivity options, on top of a real finned VRM heatsink and integrated I/O shield, into a package that lives up to the stellar design and build quality of the Aorus name. If you’re looking for a reliable platform to get the job done in gaming and light productivity work, the B550 Aorus Pro AC won’t disappoint.

The 5800X, if the 3800X was any indicator, should be a powerhouse in workstation tasks but should also be exceptional for gaming, and one of the best overall homes for it is the Asus ROG STRIX X570-E Gaming for $300.

The X570-E Gaming is another remarkable entry to Asus’s ever-popular ROG STRIX series. ROG/STRIX components have always offered top-tier features and performance and some of the best proprietary software solutions, user interfaces, and build quality, all complimented by strong design language.

Asus has been one of the most popular and premier PC hardware manufacturers for what seems like an eternity for one main reason; consistency. Of course, every company makes mistakes or missteps here and there, but it’s no coincidence Asus controlled at least 45% of the market share in the motherboard market (2017-2019). You’re always going to find rock-solid motherboard options in nearly any Asus lineup, and the X570-E Gaming is one of the best overall X570 motherboards available for the 5800X.

If you’re not fond of Asus for some reason, or if you’re specifically looking for features like onboard Power/Reset and Clear CMOS buttons, check out the MSI MEG X570 Unify for the same price!

When it comes to enthusiast-class X570 motherboards, at least ones that won’t cost you a month’s worth of utility bills, you have only a few options, all with relatively similar features and pricing. Today, our award for the best high-performance motherboard for the Ryzen 7 5800X goes to the MSI MEG X570 Ace. The X570 Ace certainly isn’t the king of the hill over the Gigabyte X570 Aorus Xtreme regarding VRM thermals, but that board costs $700. Further, if you want that highest tier VRM for AMD with a cheaper price tag by opting for their B550 Aorus Master, you end up losing out on the bandwidth/connectivity of an X570 chipset. Hence our decision, because MSI’s X570 Ace is one of the most popular, well-reviewed, and well-rounded enthusiast X570 motherboards ($350-$700) with arguably the best balance of features, build quality, and aesthetic design.

The X570 Ace is one of only two platforms MSI didn’t decide neglect after the release of X570 about a year ago. Many of the options priced under the Ace at the time, like the Gaming Edge Carbon and Gaming Edge (Wi-Fi), had worrisome issues with thermal throttling, even for some Zen 2 chips! However, MSI eventually addressed those issues and, as a response, released their MEG X570 Unify, which is essentially a slightly more affordable, blacked-out version of the Ace. If you want one of the sleekest and most potent X570 motherboards on the market, though, consider MSI with their “ace in the hole” 😊.

mATX motherboards are overlooked and underappreciated. It’s a disservice and a tragedy that we don’t see as many high-end mATX options as we should. Until recently, there was only one mATX option for the X570 chipset from ASRock, and it was mediocre at best. Thankfully, with the release of the new B550 chipset, we now have access to several mATX Ryzen motherboards with great VRMs, and the best of the bunch is the $180 Asus TUF Gaming B550M-Plus (Wi-Fi).

Despite the general disinterest in mATX compared to full-sized ATX and mini-ITX PCs, mATX can offer the best of both worlds. You can reduce your rig’s overall size from standard ATX while avoiding much of the hassle associated with the extensive hardware compatibility research and tedious build process required for most mini-ITX systems. Now, thanks to Asus and their ubiquitous TUF Gaming series, we have a spectacular mATX motherboard that’s capable of driving even a 5950X. However, it may not keep up with any serious overclocking if Zen 3 turns out to have some headroom to play with, which Zen 2 essentially didn’t, so keep that in mind. But, if you’re itching to shrink your footprint and you don’t want a shoebox PC, the B550M-Plus (Wi-Fi) offers some of the best mATX VRM quality and USB connectivity for Ryzen CPUs to date, making it the clear winner for those looking at the 5800X.

While we may not ever experience the same sort of droughts for mini-ITX motherboards that we do for mATX, there’s quite often one option to choose from each of the major manufacturers. Today, we’ve chosen the Asus ROG STRIX X570-I Gaming for $250.

Not only does the STRIX X570-I have competitive VRM performance for ITX AM4 motherboards overall, but it also sports some of the best rear I/O USB connectivity and memory overclocking support. Builders who want the best possible SFF (small form factor) PC for high-end Ryzen CPUs like the 5800X, you cannot go wrong with the X570-I Gaming.

AMD continues to dominate the CPU market with Zen 3, and based on their consistent and dramatic improvements, things might start to get tense in the GPU market later this year when Big Navi finally drops. Even though Zen 3 brought a price hike, the performance improvements more than justify an additional $50 on top of what was already a reasonable ask for each tier of Ryzen. However you feel about any PC hardware company, competition is almost always a marvelous thing. We have tons of crazy developments headed our way for at least the next few years because of it.

Best Entry-Level: Gigabyte B550 Aorus Pro AC – This is the best option under $200 for builders looking to leverage PCIe 4.0 with a 5800X who may not want to “waste” features like support for multiple Gen4 M.2 NVMe SSDs on the more expensive X570. The B550 Aorus Pro AC also prioritizes rear I/O USB connectivity more than most other available B550 options.

Best Overall: Asus ROG STRIX X570-E Gaming – Consistency, quality, and reliability are typically the hallmarks of ROG STRIX products, and the X570-E Gaming is no different. With a rock-solid VRM, plenty of USB 3.2 and SATA III ports, and a POST code readout, Asus has one of the most well-rounded high-end X570 boards perfectly suited for the 5800X. If you’re not a fan of Asus, or you specifically require onboard Power/Reset and Clear CMOS buttons, check out the MSI MEG X570 Unify forthe same price instead.

Best High-Performance: MSI MEG X570 Ace – For $370, the X570 Ace is one of the best enthusiast-class motherboards with a competent high-end VRM, gorgeous design, and similar features to even $700 boards like the MEG X570 Godlike or Gigabyte’s $700 X570 Aorus Xtreme.

Best mini-ITX: Asus ROG STRIX X570-I Gaming – Competitive VRM design for X570 ITX and massive USB connectivity on the rear I/O. If you’re thinking of grabbing a 5800X, there is no better option for SFF systems on the market!