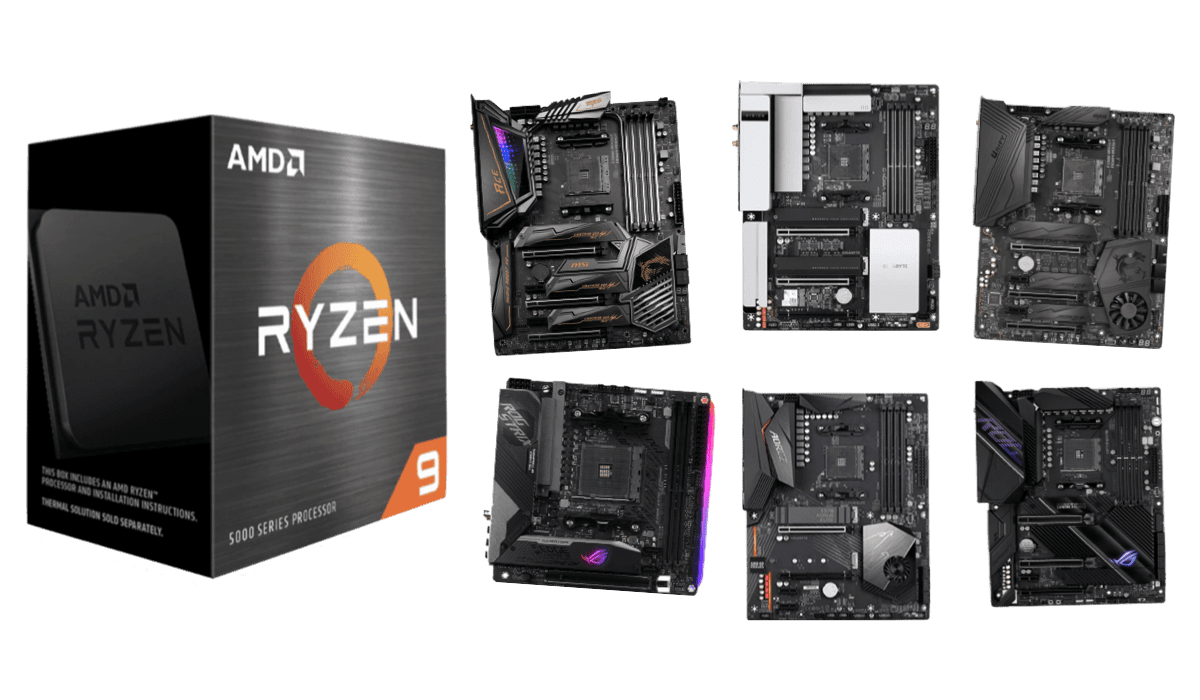 AMD’s Zen 3 CPUs have stormed onto the scene with impressive performance. The top tier offering is the Ryzen 9 5950X – Taking the last generation 3950X’s formula of 16 cores in a consumer CPU and adding Zen3’s state of the art individual core performance to make a CPU that can truly do it all. This processor dominates gaming and productivity benchmarks making it the most versatile CPU available today. To ensure you get the best out of it you need a motherboard with the connectivity and features that meet your demands. Whether you’re going to explore the limits in an overclocking rig, use it as the core of a productivity workstation, or simply want to game with the best chip available today we’ve got recommendations for the best X570 motherboards you need to ensure that the Ryzen 5950X performs at its best.

The Ryzen 5950X is remarkable not only for its capabilities but also because of its efficiency: AMD quote a thermal Design Power of just 105W whilst peak loads see it consume around 140 Watts. The consequences of this are twofold when considering your PC build. Firstly most CPU coolers are capable of dissipating this heat, giving you a wider choice of coolers for your PC and any cooler compatible with the AM4 socket will fit. Secondly, almost all B550 and X570 motherboards have voltage regulation circuity (VRMs) that are more than up to the task of providing power to this chip. Again this frees up your choices amongst the options despite pairing them with this top tier CPU. All in all, this is an excellent coup for AMD, vs current Intel Comet lake CPUs that cannot match the performance but approach 250 Watt power draw whilst trying.

Without further ado, here are the best motherboards to pair with the Ryzen 9 5950X – with options for a variety of builds – such as gaming, overclocking, micro-ATX. ITX and enthusiast Zen 3 builds.

MSI’s MEG Unify boards have long been overclocking stalwarts and this X570 motherboard, the MSI MEG X570 Unify, is no exception. It has serious provenance, holding overclocking records on Ryzens Zen 2 CPUs. There’s a host of overclocking features including power and reset buttons on the board itself and a full debug panel for faster troubleshooting as you explore the limits of your CPU and RAM. It uses a pair of 8 pin EPS connectors to ensure sufficient power to the 14 phase CPU VRM, and those VRM’s are extensively heatsinked with a heat pipe to keep temperatures in check. The only overclocking feature missing is a dual BIOS. However the flexibility of the MSI X570 BIOS and power limits not being a problem owing to the efficiency of the 5950X mean you will have no problems extracting the full potential from the CPU without needing to switch between BIOSes. Beyond that, there’s 2.5Gbps LAN courtesy of a Realtek LAN controller, a host of USB ports and the high-quality ALC 1220 audio chip. Its network connectivity is enhanced with WiFi 6 and Bluetooth. Two of the three PCIe 4.0 slots are PCIe 4.0 capable, whilst all three M.2 Slots offer PCIe 4.0 compatibility with one routed direct to the CPU and two via the X570 chipset. Finally, there’s a host of RGB headers (although the board itself does without RGB in keeping with its restrained design) and five system fan headers in addition to a CPU fan and pump header. This feature-rich board is all you need to extract maximum potential out of your Ryzen 5950X.

The ASUS ROG Crosshair VIII Dark Hero is a high-end X570 motherboard with a ridiculously long name and an even longer specification list. Taking the already impressive original X570 Crosshair VIII’s features and building on it, the ‘Dark’ version of this board has uprated 90Amp power stages and does away with the much-derided chipset fan. It has features including Dual LAN (2.5 Gbps and 1 Gbps), exceptionally strong 14+2 phase VRM and extensive heat sinking, as well as onboard power and Clear CMOS buttons and a debug panel. It’s one of a handful of boards to include water loop monitoring sensors making this board an excellent foundation for your perfect enthusiast build. The Aesthetic of the board is clean and mature with brushed aluminum and the ROG logo in RGB. ASUS make a big play of the high-end audio solution with premium Audio components and a SupremeFX S1220 sound chip and high-end capacitors in the output stage. Overall this board has an extensive feature set and desirable aesthetic, combined with the capacity to run a Ryzen 5950X to its limit without issue. It’s an excellent all-round choice for the discerning enthusiast building with the Zen 3 5950X.

If you’re looking to build the ultimate Gaming and streaming Rig around the Ryzen 5950X then the Gigabyte X570 AORUS Elite offers a wallet-friendly but fully-featured motherboard. The specification is solid across the board with strong Voltage Delivery circuitry and a 12+2 Phase design. The Audio codec is the workmanlike ALC1200 chip, perfectly good for gaming sound output whilst there’s a pair of NVMe compatible M.2 slots for fast boot drives and six SATA ports for extensive storage options. The BIOS has a ‘Q-flash’ option so you can update BIOS without a compatible CPU – important if you want to buy the board now whilst you wait for a 5950X to become available as you’ll be able to update the BIOS if it’s not compatible out of the box. It has a full array of monitoring and overclocking options in BIOS so you can optimise your system. The Gigabyte X570 AORUS Elite is a motherboard with all the features you need to get the most out of a Ryzen 5950X, without spending money that is best put towards the best GPU you can afford to make the most powerful 5950X gaming PC possible.

It may seem odd to include a B550 motherboard in the lineup to pair with AMD’s highest-end CPU but the Gigabyte B550 Vision D has features that make it ideal for video production: This board features 2 Thunderbolt ports and dual LAN ports. This allows you to connect a plethora of high-speed drives and enjoy fast data ingest and transfer. This is vital in optimizing the workflow of a content producer working on high-resolution footage.

The rest of the board specification isn’t compromised, with dual PCIe 4.0 M.2 slots and a PCIe 4.0 x16 slot to allow a powerful GPU to assist in rendering. It’s also Quadro QVL tested for Nvidias professional graphics cards. The CPU power delivery is up to the task of running the Ryzen 5950X at full speeds with 12+2 phases, whilst this board has passed Puget Systems stringent qualification process for use in their high-end systems.

This board is a very interesting option from Gigabyte and fuses high end looks with features vital to content creators, whilst keeping costs and complexity down through use of the B550 chipset. It’s an excellent choice for a videography workstation built around the Ryzen 5950X.

It’s become a point of pride for Small Form Factor enthusiasts to squeeze the latest and most powerful CPUs into the smallest form factor cases available. To support this desire there are very few X570 Mini ITX motherboards but the ASUS ROG Strix X570-I Gaming takes our pick as the one best suited to the Ryzen 5950X. It uses an innovative design integrating a small fan into the IO plate heatsink, and using a heat pipe to draw heat away from the chipset. All of this helps in ensuring the Chipset and 8+2 Phase power stages can adequately cool themselves under the demands of the 5950X. Given the limitations of the ITX platform Asus have crammed as much as possible into this motherboard, including a pair of M.2 PCIe 4.0 x4 slots for high-speed NVME storage drives, 8 total USB ports including 4 USB 3.2 Gen 2 with one of those being a Type C. Audio output is managed by the high-quality S1220A SupremeFX Codec chip, and there’s Wifi6 and Bluetooth onboard as well.  Asus has given a good deal of thought to heatsinking, given the limited space on the board, the power mosfets have a heatpipe and heatsinking and the rear IO plate is vented to help hot air escape. The M.2 slots and Chipset utilise a compact stacked heatsink design and a low noise fan to keep them at comfortable operating temperatures. Overall the board has a slick anodised aesthetic with an RGB ‘ROG’ logo and a strip of RGB LEDs down the edge. This board represents the pinnacle of the X570 chipset in a small form factor motherboard.

X570 is the domain of content creators: From video rendering to 3D content generation, the Ryzen 5950X is unrivalled in power. The MSI MEG X570 ACE has all bases covered. It has a strong 12 phase VRM design which will happily power the Ryzen 9 CPU to its full potential. There are 3 M.2 slots so you can run a combination of PCIe 4.0 NVME drives and the lower speed but still very useful PCIe 3 drives as your needs develop. One oddity of this board is that it has just 4 SATA ports: If you’re planning an array of SATA drives you’ll want to look to the ASROCK X570 Creator or consider a PCIe to SATA expansion card. Dual 2.5G  and Gigabit LAN allows fast networking for file ingest and delivery, whilst WiFi 6 adds a useful networking option. The Rear I/O panel includes four high-speed USB 3.2 Gen2 ports with one of them being USB-C. Overall this board has a great balance of performance and features for a content creators build without using too much budget that could go towards other essential components.