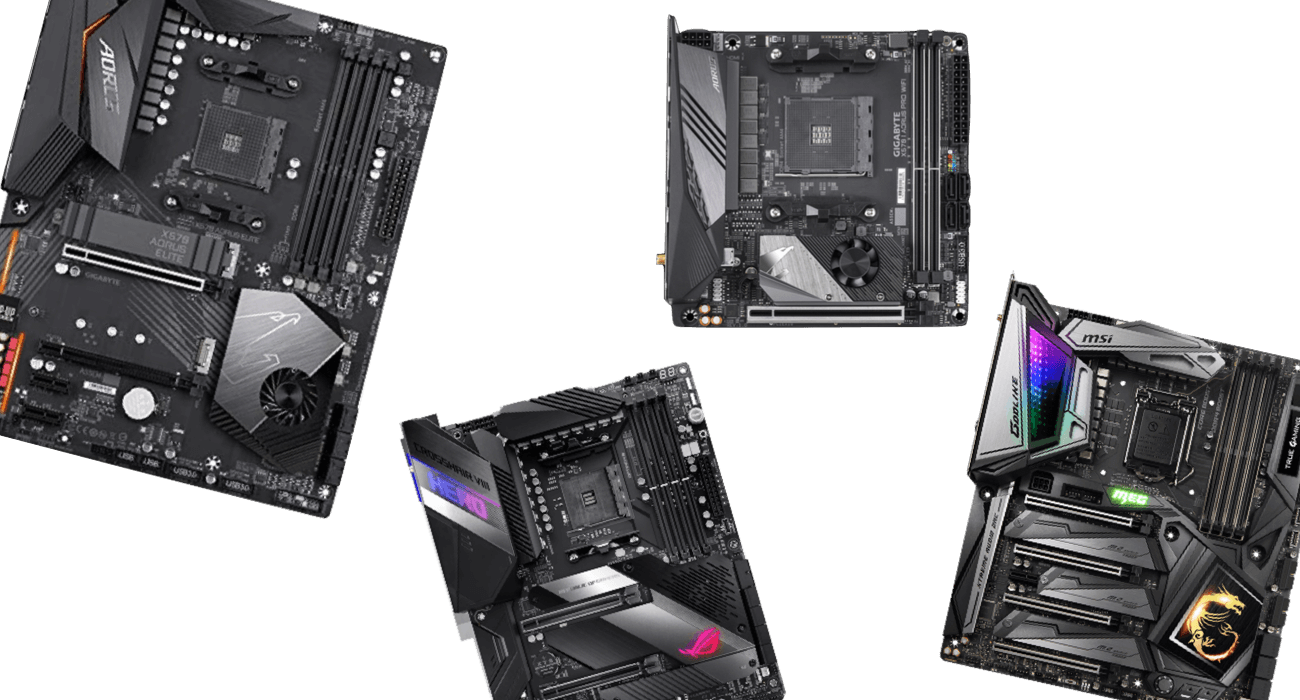 The 3950x has landed from AMD, and it takes Ryzen Zen2 to its peak. With a massive 16 core / 32 thread design and advertised boost speeds up to 4.7GHz, the 3950x is a beast of a mainstream processor that challenges HEDT processors in terms of pure core count and computing performance. Early tests show that the added cores and threads are a marked improvement over the 3900x for tasks that benefit from parallel computing power, making the 3950x the clear choice for any major productivity user.

In our last article, we covered CPU cooling solutions for the 3950x, which has a power draw of 105W and generates a corresponding amount of heat that needs to be dissipated if you want maximum performance. But in this article, we’re focusing on the other component that will match your 3950x and help it reach its full potential with clean power and high quality VRMs: the motherboard. The X570 chipset from AMD was designed to power even the 16c/32t 3950x, but that does not mean that all X570 motherboards are created equal. As with any motherboard, we’re looking for the board that offers great performance (mainly VRM set-up for clean power), features that give us exactly what we need for our use case (like M.2 slots or PCIe slots), and to a lesser extent, the aesthetics to help show off the inside of our rig. For a motherboard, we recommend sticking with one of the big four for reliability (ASRock, ASUS, Gigabyte or MSI) and to make sure that the backbone of your PC will be stable with strong BIOS support even years into the future.

So with all that in mind, let’s take a look at the best motherboards for the Ryzen 9 3950x:

As we mentioned above, all X570 chipset motherboards were built with the 3950x in mind, but the lowest level boards won’t offer enough performance to really support the 3950x. Even if they nominally can power the board, they won’t be able to help achieve an all-core boost of 4.6-4.7GHz, and if you are spending $750 on the 3950x, it’s worth getting a motherboard that can let you make the most of your CPU. So for a budget motherboard for the Ryzen 9 3950X, or the absolute minimum board for someone that is strapped for cash and has spent all of their budget on the CPU, we recommend the Gigabyte X570 Aorus Elite WiFi.

Gigabyte has had it’s up and downs in terms of motherboard reputation, with the B450 motherboard line-up being considered only OK, but the Z390 lineup receiving plenty of praise. Luckily, the X570 line falls much closer to the Z390 and contains some of the best value-for-money motherboards available for the AM4 socket. In particular, this Aorus Elite is an absolutely fantastic motherboard for its price. The stellar 12+2 VRM set-up will provide plenty of clean power for even the 3950x, even if it may not support any overclocking (not that we would expect that on a minimum budget board), and has performed wonderfully in online reviews. With two M.2 slots for fast storage and two PCIe x16 slots (one with a x4 wiring), there are plenty of options for peripheral expansion. And the inclusion of some nice features like BIOS flashback, a bit of RGB, and some nice heatsinks make this an overall well-rounded keyboard.

Now, this motherboard comes in right around $210, so still not cheap. But for X570, this is about as cheap as you can get while still getting a great quality board. You miss out on USB-C front panel, WiFi 6 (it has WiFi 5), and the highest quality on-board audio codec, but you do get great performance and a nice set of features for including storage/graphics cards. If you are spending $750 on the CPU, we would think you could afford a bit more for a motherboard, but if you are on a tight budget then this Aorus Elite will give you everything you need to get full satisfaction from your 3950x.

Now, if you are looking for a motherboard that’s a step or two up from the minimum budget board, you begin to have some more choices. The 3950x may seem to be a productivity user’s dream because of its high core count, but gamers will still see plenty of power with the high single-core speed and as games begin to optimize for parallel threading. A gaming motherboard is looking at performance before all else, so VRMs are going to be extremely important. As Crossfire for dual graphics card has not proven useful for gaming, PCIe slots won’t be overly important (as long as there is one of course), and unless you are going for a pure insane Minecraft rig, M.2 storage won’t be overly important as 2 slots should be more than enough for gaming, especially when complemented by SATA storage possibilities. So with that in mind, our choice for best gaming motherboard for the 3950x is the ASUS ROG X570 Crosshair VIII Hero.

The Crosshair Hero line of motherboards has been around for a while (as noted by the ‘VII’) and consistently provides prime overclocking abilities for gamers. This motherboard is not a workstation board, it has ‘only’ two M.2 slots and ‘only’ the now standard 8 SATA slots. But for gamers, this is more than enough. And it means that ASUS was instead able to invest in a killer 14+2 VRM set-up that should allow serious gamers to overclock their CPU to get the highest single core clock speed possible, which is still very important to gaming. The subtle RGB will also appear to most gamers, as will the high-end S1220 audio codec that should help with directional noise and hearing enemy footsteps.

In general, gaming is not always the first thought for a 3950x user, but if you are a mixed user or decided to try and future-proof with the high core/thread count processor, it certainly offers some interesting possibilities. And at $400, the Crosshair VIII will be the perfect complement, giving you the choice to push your 3950x to its limit and eke every last frame possible out of your rig.

The workstation category is the sweet spot for the Ryzen 9 3950x, which is really built to excel as a workstation CPU.

Accordingly, we went for one of the more expensive motherboards that is built to really get the most out of the 3950x, and offering a ton of I/O options to ensure you can connect exactly what you need for your workflow. While there are natural limits based on the chipset (for example, a 3 x M.2 motherboard would have less SATA slots or less PCIe x16 lanes), there are some motherboards that balance this better than others. And our recommendation for the board that balances this best is the MSI X570 Godlike.

As its name indicates, this board was made for those looking for ‘godlike’ performance. Importantly, it’s an E-ATX board! So make sure your case can fit it. But if you can, you get a little bit more of everything to ensure you never have limitations to your workflow based on I/O ports. The Godlike has 3 x M.2 slots built in, with an expansion card to add another 2 x M.2 slots that comes bundled with the motherboard; 4 x PCIe x16 slots for multiple GPU set-ups for rendering activities, WiFi, 10G LAN, RAM support up to 4600MHz, and WiFi 6. This board would be capable of just about anything, including gaming, but the extra space is a perfect complement to make sure you can have as many connections as you want for the 3950x to take advantage of with its parallel computing power.

Many people have a rule of thumb to never spend more on the motherboard than the CPU, and we still fit that rule with this motherboard, but not by too much! At $650, this is an expensive motherboard. There are options like the ones we mentioned above at a much lower price. But if you are using this for work or as a productivity rig, the benefits are pretty enormous for the extra cost and will help make sure the $750 you spent on the 3950x will not be in vain.

While SFF PC building seems to be on the rise, there is not the same wealth of choices for the ITX form factor as for ATX (although there IS more than the middle-ground mATX form). Luckily, of the limited selection, almost all of the ITX boards are at least decent, and a few are truly worthwhile. Putting a 3950x into a small form factor build might seem odd, but plenty of workstation users want a minimalist or even portable set-up. And while you might not be able to get the same level of performance due to limited cooling options without spending an absolute fortune, you should still be able to build a very powerful machine. And to help make that machine a reality, we recommend going with the Gigabyte X570 ITX Aorus Pro for your motherboard.

The Aorus Pro ITX takes many cues from its larger brothers (like the Aorus Elite we recommended as a budget board) and avoids overly frilly gimmicks in favor of a good 8 phase VRM set-up and large heatsinks to keep them cool. The VRMs are not the same quality as a 14+2 phase like we see in something closer to the Crossair VIII Hero, but Gigabyte has managed to make a very good board that will still provide plenty of clean power to a 3950x, even if more heavy overclocking might be difficult. The Aorus Pro also includes plenty of I/O for an ITX board and some nice features, like WiFI, some RGB, two M.2 slots, and BIOS Flashback. You won’t get as much when compared to a larger ATX board, but you can still have just as good of quality components with this smaller package.

The other killer feature of this board is its very reasonable price. At $220, this board provides a lot of advantages, keeping strong performance and features. We like this one in particular mainly for the price-performance, but the other ITX offerings of the X570 lineup, like the ASUS ROG X570-I or the ASRock X570 Phantom Gaming ITX, which has the added interesting feature of Thunderbolt 3. The good news is, there really isn’t a bad choice amongst the three, so go with which one looks best to you or you can find a good sale on.

Motherboards are important, and range from mega-expensive to very reasonable, so make sure you think about your needs when selecting the backbone of your rig. Spending $750 on a 3950x is all well and good, but make sure you put aside enough to get a motherboard to match!

As a final note, you’ll notice our motherboard recommendations are not for the absolute most expensive motherboards. That’s on purpose! Something like the Gigabyte Aorus Extreme or ASRock Aqua are obviously killer boards, but with $1000 price tags, we would expect them to be! So instead, we’re looking to find motherboards that offer great value at interesting prices. If you have an unlimited budget, then go for a top-of-the-line motherboard and enjoy! But if you have a budget (even if it’s a big one), these recommendations are right for you.