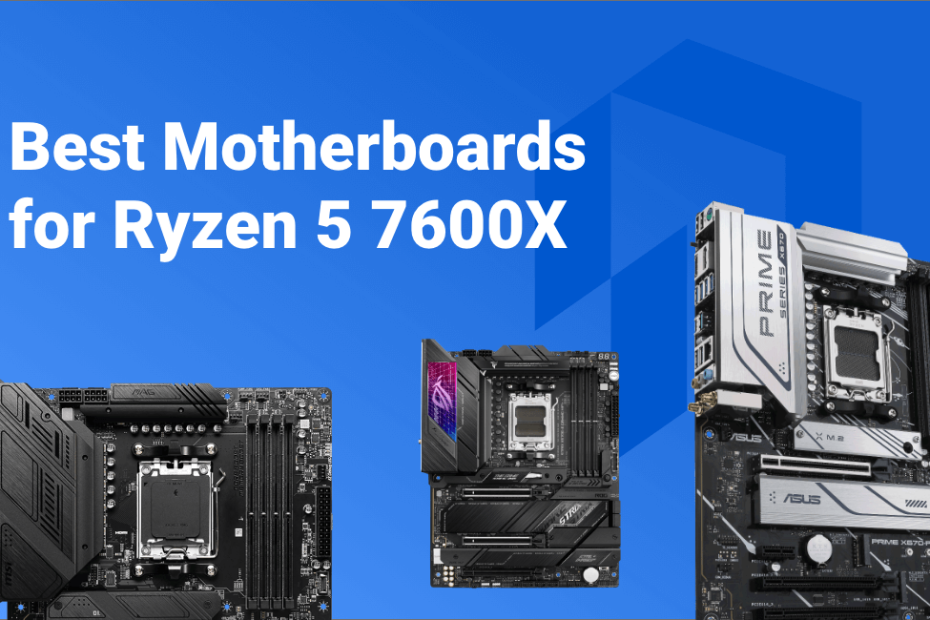 AMD’s latest Ryzen 7000 CPUs are finally here – and here at PremiumBuilds, we have spent some time with the new mid-range Ryzen 5 7600X – the next newest Ryzen 5 CPU offering from AMD based on their Zen 4 architecture.

If you’re looking to build a system with the Ryzen 5 7600X, or any new Ryzen 7000 CPU for that matter, you’re going to need to heavily upgrade or spend a pretty penny on a new system as these new CPUs are are based on their AM5 platform. This new platform brings a plethora of new trick features – including DDR5 and PCIe 5.0 support.

In addition, we’ll take you through some of the key factors and considerations to take in mind when picking a motherboard for the Ryzen 5 7600X – so if your specific requirements are a little bit more bespoke, you’ll be able to do the research and knowledge to find the perfect motherboard for your new Ryzen 5 7600X system.

Starting with our overall favorite motherboard to pair with the 7600X comes from Asus, with their Prime X670-Pro WiFi. Being a X670 chipset, this motherboard comes in the lower price point than some of its MSI rivals (>$1000!) but comes with plenty of features that will handle everything the Ryzen 5 7600X will throw at it. With a 14+2 Phase 70A VRM with an impressive heatsink for thermal dissipation, this motherboard is perfect for overclocking the Ryzen 5 7600X. Other features include an extensive I/O with USB 3.2 Gen2x2 Type-C support, WiFi 6E, 4 DIMM slots as well as 6 SATA slots. This is a great AM5 motherboard that doesn’t break the bank but offers plenty of performance and connectivity for any Ryzen 5 7600X system.

This is the cheapest motherboard you can use to build a Ryzen 5 7600X system, and boy does it perform for the money. This newest B650 chipset motherboard packs a punch in its micro-ATX form factor and has an impressive 12+2+1 phase VRM, with support up to 6200MHz DDR5, dual PCIe 4.0 support. We’re not happy about the presence of the ALC897 codec, but we think this is outweighed by the solid VRM performance and features making this great for any budget Ryzen 5 7600X system.

If you’re looking for a mid-range motherboard to pair with the Ryzen 5 7600X, the MSI B650 Tomahawk WiFi is the best current option to go for from the AM5 offerings. With most B650 motherboards, you’re really able to build an overkill system but its easy to overspend with these new AM5 motherboards with the price nudging up with each generation. With the B650 Tomahawk WiFi – you get a solid range of features, a overkill 14+2+1 phase VRM design with a oversized VRM heatsink to match. The only downside is that this motherboard doesn’t have support for M2 Gen5 support – so if you’re looking to build a system with this, look for another alternative!

When building a high-end system for the Ryzen 5 7600X – we have strong recommendations for pairing this CPU with the Asus ROG Strix X670E-E Gaming. This motherboard is perfect for overclocking with its unmatched 18+2 VRM design with 110A power stages and decent capacitors – kept cool with 2 oversized VRM heatsinks and dissipation features. With support up to PCIe Gen 5 on 2 slots and 3 M2 Gen5 – this motherboard for the 7600X is not short of storage performance. 13 rear ports on the I/O and a S1220A codec and ALC4080 codec help round off this motherboard to be one of the best all-round and high-end picks when picking a high-end motherboard for the Ryzen 5 7600X

If you’re lucky to get your hands on one of these, then we recommend building a ITX 7600X system with the Asus B650-I Gaming WiFi. Whilst the ASRock ITX counterpart has a better VRM design compared to the Asus’ 10-stage 70A VRM, this motherboard is packed with great rear I/O connectivity, DDR5 support up to 6400 MT/s+ and overall feature set is why it gets our pick for the best ITX motherboard for the Ryzen 5 7600X