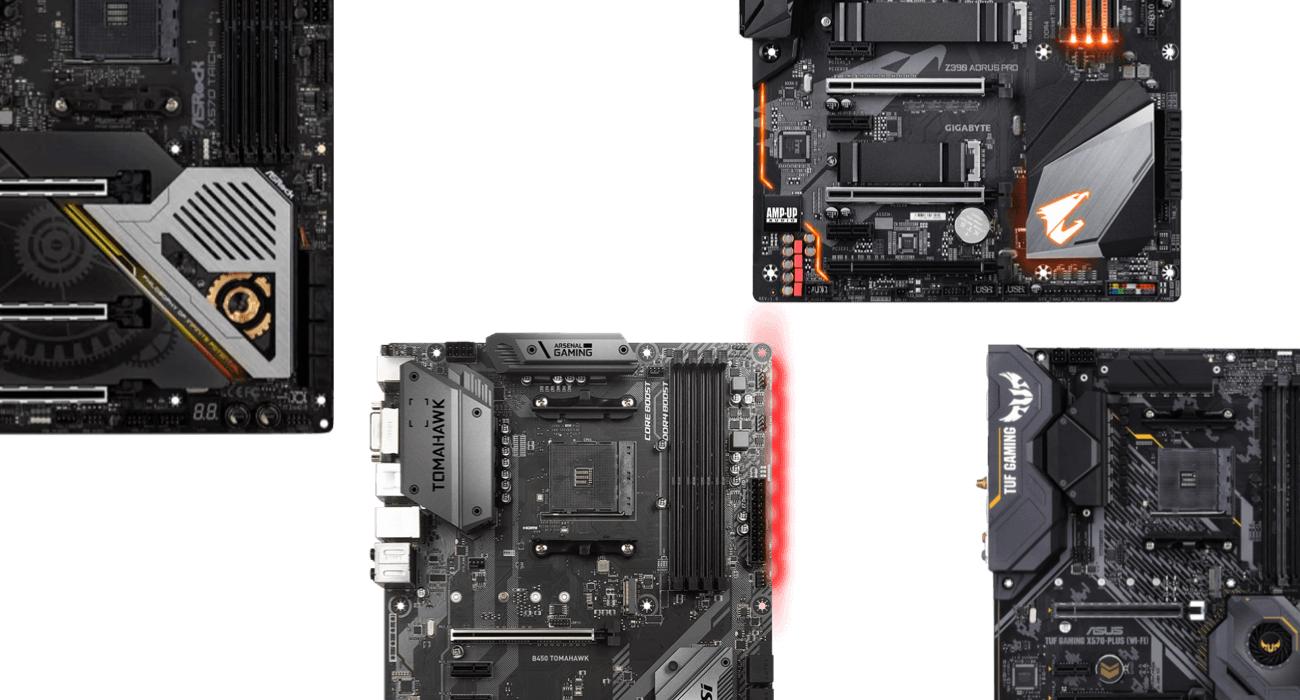 In this guide, we’re going to continue with our high-level reviews like we did with five major GPU manufacturers and talk generally about the major motherboard manufacturers putting products into the market today. We won’t cover every single one, such as BIOSTAR that still produces a few motherboards, but the market is overwhelmingly controlled by four producers: ASRock, MSI, ASUS, and Gigabyte. We will look at some of the pros and cons of the four major manufacturers, as well as some specific examples of motherboards that are representative of their reputations.

Choosing a motherboard is always an exercise in budget vs. performance, and is overwhelmingly dependent on the processor you decide on for your rig. Very few people choose the motherboard first, and then pick the processor, and that makes sense as the CPU will have a much larger impact on the performance of your machine and how you will use it. So while over generalizing is never a good idea, this guide will help you understand better the reputation of some of the big players in the motherboard market today:

We are starting with one of the more interesting motherboard producers, and one that really focuses on motherboards despite jumping back into the GPU market recently with the Challenger and Taichi lines of RX 5700/XT cards. ASRock has an odd reputation, mainly as a leftover to its past as a filial, and low cost filial, of ASUS. But since it spun off to become a more independent company in 2002, ASRock has produced some very fine motherboards that seems to cost less for the same amount of performance. The price differences have seen to more or less evaporate with the most recent lineups, but ASRock continues to provide great value while still offering strong performance and innovation throughout their motherboard lineups. The biggest gripe we hear about the ASRock motherboards is the very unfriendly RGBPolychromeSync software, their proprietary downloadable software for controlling RGB on the motherboard and with accessories. Almost all RGB software is awful, but PolychromeSync really does stand out as extraordinarily bad. Luckily, once you’ve set up the RGB of your accessories to your liking, you can pretty much never look at it again.

A great example of the value offered by ASRock is one of their most popular motherboards, the ASRock X570 Taichi. Much like the X470 Taichi, ASRock has given this motherboard a ‘mechanical’ design that features some nice RGB, strong heatsinks, and an overall subtle elegance. On top of that, the VRM’s on this motherboard are superb, especially within its price range. Currently on sale for $300, it is not the least expensive X570 board, but just like the X470 Taichi, if you are looking for a great value mid-range motherboard, the Taichi is top-notch, highlighting the strong value and reliability of ASRock.

MSI is one of the best-known names in component production and is ubiquitous in the market. From motherboards to GPUs to cases to pre-builts, MSI is everywhere. And while sometimes this leads to cutting corners or weaker products, MSI has done a good job of keeping its lineup pretty strong from top-to-bottom. Because of their size, MSI is typically great in covering all budget levels, offering some high end options for those users with specific needs or looking to overclock to the max, but also including some of the best value for money lines (for certain chipsets at least). The most recent MSI release, the X570 chipset motherboards, were not well-received due to their relatively poor performance, especially in the budget segment. But aside from those specific motherboards, MSI produces quality good.

A great example of the typical MSI value proposition is the MSI B450 Tomahawk (MAX). The B450 Tomahawk was widely recognized as the single best value motherboard in the entire B450 range thanks to its absolutely stellar VRM set-up, nice feature set, and very reasonable price point of around $110. Accordingly, it was recommended everywhere for any Ryzen 2000 series processor, becoming a legend on building communities like r/buildapc on Reddit. Many people continued to recommend the B450 Tomahawk for Ryzen 3000 series CPUs, until users started reporting difficulties updating BIOS. MSI responded with a nice refresh, the Ryzen 3000 ready B450 MAX lineup. The B450 Tomahawk MAX maintained the same great VRM set-up and the $110-$115 price point, but updated the BIOS chip to better hold the newer BIOS necessary for Ryzen Zen2 chips. This type of quick response is the advantage of a big producer like MSI, and the cost-savings vs. X570 motherboards are just an example of how MSI can provide great value.

ASUS is similar to MSI in that they produce a large variety of components. But where MSI has found a subtle-yet-distinctive aesthetic of black/silver/red with slight RGB on their motherboards, ASUS has maintained a subtler overall design – not including some motherboard that completely follow the RGB craze. Luckily, almost all of the motherboards implement their RGB well, offering good customization and nice motherboards. And to go along with the money ASUS has put into design, there seems to be an equal investment into producing high-performing motherboards with strong VRM modules and plenty of features, even at the lower end. But to get the boards with the most RGB and performance, ASUS motherboards can be among the more expensive on the market.

For the epitome of ASUS value and aesthetic design, we think the X570 TUF Gaming Plus highlights the most important aspects of ASUS motherboards. Other lines like the ASUS ROG STRIX are also very impressive and demonstrate the flash of ASUS, but the TUF lineup has been around for ages and is in our opinion, an even better example of the power of ASUS. For a long time, the TUF line was a well-loved lineup that really was a great price-performance contender, but in the early 2010’s, that seemed to fade a bit.

Fortunately, ASUS seems to have found their mojo with the X570 TUF line. Amongst all ‘entry-level’ X570 boards, the TUF Gaming performs the best in terms of VRMs, and includes a great feature set to match. The design is appealing and elegant, while still giving hints of robust reliability. Even better, the TUF lineup brought back the true value proposition, offering the X570 TUF Gaming Plus at $165, or $195 with the WiFi bundle included.

This type of high-performance and strong reliability shows the power of ASUS when they avoid going full RGB and focus on great motherboards, something we hope they continue with in the future.

Gigabyte is nearly as widespread as MSI and ASUS with their lineup, but seem to focus more on GPUs and motherboards. And while this has led to mixed success in the GPU market, with some storng options like the Gaming OC lineup and some less strong lineups like the entire VEGA offering, their motherboards seem to have really taken off lately. While we have talked a lot about AMD chipsets in our examples above, Gigabyte should be noted as producing equally strong Intel and AMD motherboards with the most recent Z390 and X570 lines. While this might seem easy (just change the socket!), it shows the versatility of Gigabyte and reflects their more focused approach to component creation. Customer service is not always praised as strongly as someone like EVGA, and the catastrophic failure of the VEGA GPU release has dogged Gigabyte for years, but overall, their motherboards look good and offer great value at both the budget level and high-end of the spectrum.

To truly capture Gigabyte’s motherboard spirit, we chose to look at the Intel side and highlight the Z390 AORUS PRO. AORUS has been the major lineup of almost all Gigabyte-produced components for a few years, using an orange-and-black eagle logo to demark their products. This particular motherboard is a great example of the AORUS value, with a 12+1 VRM set-up that can power even an overclocked 9900K and some nice design touches to keep the board looking fresh. The reviews of the card back-up the strength of the performance, and at $185, the AORUS PRO is one of the go-to recommendations for 9700K or 9900K users. For some reason, Gigabyte does not always get the attention of MSI or ASUS, but with motherboards like this one, we can’t really understand why as their products are just as strong and often even more attractive depending on the exact chipset you are looking for.

This article is a bit of a different approach for us at PremiumBuilds and continues our broader look at some of the major manufacturers out there. Once you’ve decided on your processor, you should always continue on by looking at some in-depth research on the motherboard offerings for that chipset, but this article can help you orient your search when trying to navigate amongst all of the different producers and partners that advertise their lineup. We’ve given a few examples of motherboards we think represent these brands, but be sure to research the specific model you are looking at getting no matter which manufacturer you choose to have some in-depth reviews.

We had some good feedback on the last GPU article along these lines, but we are always ready for more feedback, so let us know what you think about this type of article and if you would like to see more of it!