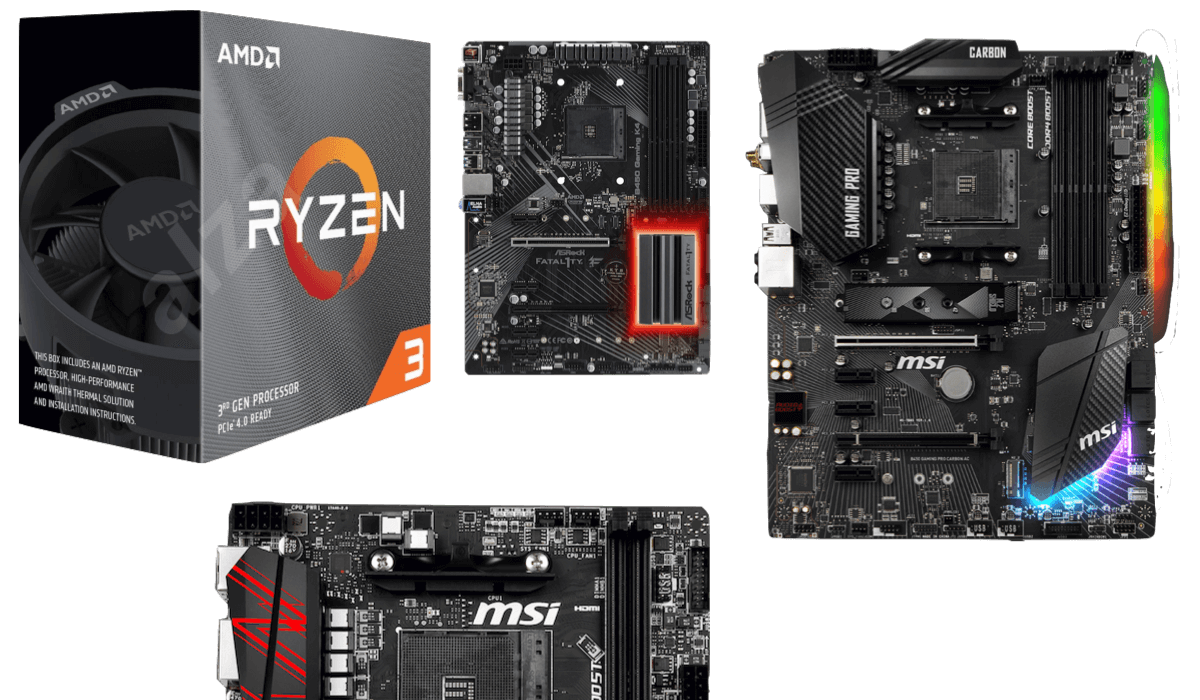 What’s great about AMD’s Ryzen CPUs, is the fact that you can buy their newest 3000 series CPUs, and plug them into an inexpensive motherboard and they’ll work just fine. The diversity of the AM4 chipset’s motherboards allow you to make some amazing value-for-money builds, and now, with the release of AMD’s newest Ryzen 3 3100 and Ryzen 3 3300X, it’s the best time to look for a B450 motherboard that can be used either for an inexpensive gaming CPU that can handle popular online multiplayer games like Fortnite, DOTA 2, or League of Legends, or even – with the use of a more powerful Ryzen 7 3700X – create a gaming build, or workstations.

The critical parameters to look out for in motherboards include the VRM solution, to ensure that they can supply enough power to the CPU for overclocking, the thermal solution, to make sure that temperatures do not become a hinderance when your PC handles heavy loads, the connectivity, how much RAM and ROM storage they can hold, and, finally, what kind of audio chipset and software these motherboards contain.

Important to note, is that the general specifications you should look for depending on your build. For example, anything over 16 to 32 GB of RAM, and any memory speeds of over 3200 MHz, are pretty much overkill for gaming. Arguably, the same applies to entry-level / mid-end, workstations as well. In terms of ROM, two M.2 slots should suffice, and covers for these M.2 slots are great as they dissipate heat from the SSD, preventing unwanted stuttering or even crashes. Lest we forget, any RGB lighting and synchronization capabilities, to add some extra glamour for gaming enthusiasts.

It is important to note, that these choices were made based mostly on their money-to-value ratio, but rest assured that any of these boards can easily carry and overclock CPUs of up to the Ryzen 7 3800X, while they can operate the stock speeds of even the Ryzen 9 3950X at stock speeds.

Looking for an inexpensive motherboard to plug in a Ryzen 3 3100 or 3300X? Then this option from ASRock, the Fatali1ty B450 Gaming K4, should fit your specifications well; and do so at a sub 100-dollar range.

Despite its low price, the ASRock Fatal1ty B450 Gaming K4 has a respectable VRM setup. It uses an Intersil ISL95712 7-phase PWM controller, and Intersil ISL6625A gate drivers. This results in a 9-phase – six of which are true – Digi Power VRM, with SM4337, 55-amp MOSFETs, all of which are heatsinked. Not the greatest of heatsinks of course, but it will suffice.

Memory wise, it can carry more than enough RAM for gaming, 64 GB in four slots, to be exact, with speeds of up to 3200 MHz: perfect value. Its best to look for lower CAS in RAM, rather than pay for speeds above 3200 MHz where the difference is miniscule.  Storage wise, it has support for two M.2 SSDs, which is also great, as most gaming builds shouldn’t need more than 1-2 TB of storage. It also has room for two PCIe 3.0 M.2 slots, one being a 22110, the other a 2280. Neither of these two slots have a cover, and it should be noted that using these M.2 slots will disable certain parts of the motherboard. The motherboard has PCIe x16 and PCIe x4 sockets, and six SATA III 6 GB/s slots (4/6 in 90-degree angles). If the first M.2 slot is in use, the PCIe x4 is disabled. If the second M.2 slot is in use, then the third and fourth SATA slots will be disabled. In regards to connectivity, it has two USB 3.1 ports, one Type-C, the other type A, and an extra four Type-A USB 3.0; with two USB 2.0 ports as well. The Fatal1ty B450 also is compatible with ASRock’s Polychrome RGB syncing application.

The audio chipset is a Realtek ALC892, with 7.1 Channel HD audio, which is again a great value option for the price of the motherboard.

Given that the ASRock Fatal1ty B450 Gaming K4 currently sells for only $84, and given that it runs Ryzen 3000 series CPUs straight out of the box, this budget B450 motherboard is the best value in the market by far. Definitely consider if you’re looking to go for one of the new Ryzen 3 CPUs, in combination with a powerful GPU, for the maximum gaming-value setup.

Going for a small, but efficient, small form factor build? Perhaps you want to have a portable PC for gaming at a friend’s house, or an HTPC gaming/4K-streaming station in your living room? Then this small, uncostly, but also feature-rich motherboard is perfect for you.

Like most ITX motherboards, the MSI B450I has two slots for up to 32GB of RAM, though two 8GB ranks will more than suffice for gaming applications. The motherboard will support up to 3466 MHz for said RAM. It also has one PCIe 3.0 x16 slot, one M.2 PCIe slot located on the back side of the PCB (which does not have a cover) and four SATA III slots, none of which are in 90-degree angles. Port wise, is has one DP, one HDMI, four USB 3.0 Type-A ports, and two USB 2.0 ports.

In terms of audio, it has a Realtek ALC 887 chipset, but it also comes with, what MSI calls, “Audio Boost 4”. Audio Boost 4 offers an HD audio processor and dedicated amplifier, supporting impedances of up to 600 Ohm, which is an excellent feature for headphone users, as it saves you from having to buy an external amplifier. Furthermore, the capacitors and audio line are both physically isolated, reducing the risk of any interference in the audio signal.

Finally, MSI also equipped this motherboard with some gaming-friendly software, including the MSI App Player for your smartphone, flexible gaming hotkey configurations for your keyboard, and the “Mouse Master”, which allows you to customize configurations for your mouse. Additionally, you can overclock your CPU using MSI’s 1-second overclocking, which basically allows you to enable overclock with the press of a button.

With all of the above, and pricing the MSI B450I Gaming Plus AC for only $129, a Ryzen 3000 series CPU will be more than content to be housed into this feature-rich motherboard, that fits in a small, yet powerful ITX build.

Last, and quite the opposite of least, the best overall B450 motherboard for gaming and workstations alike, once again belongs to MSI: the B450 Gaming Pro Carbon AC. This full-sized ATX motherboard is great for gamers that want some extra lighting pizzazz in their PC case, but also supplies enough power, and allows for enough storage, to make it ideal even for mid-end workstations.

The MSI B450 Gaming Pro Carbon AC has a Richtek RT8894A 6-phase PWM controller, with a Richtek RT9624F gate driver, and two virtual phase doublers, allowing for an overall 10-phase VRM (8 CPU, 2 SoC). The MOSFETs are ONSemi 4C029N (46 amp) and 4C024N (78 amps), all of which are heatsinked – six via an extended PWM heatsink on the IO, and three via a smaller heatsink above the CPU. The VRM and Thermal solution allow for overclocking even AMD’s high-end Ryzen 9 3950X, given that there is an ample amount of airflow cooling in the case.

The MSI B450 Gaming Pro Carbon AC allows for up to 64 GB of DDR RAM, separated in four slots, with speeds of up to 3466 MHz. It has two PCIe slots, one PCIe 3.0 x16, and one PCIe 2.0 x4, the former being armored. In terms of storage, it has two Key-M M.2 sockets, one of which also has a cover, and six SATA III ports, all of which are situated in 90-degree angles. Important to note that the first M.2 socket will disable the fifth and sixth SATA slots if used, while the second M.2 slot will disable the second, third, fourth, and fifth PCIe slots. Finally, it also has one USB 3.1 Type-A and one Type-C ports, two USB 3.0 Type-A ports, and two USB 2.0 ports.

In addition to all the software mentioned with the MSI Gaming Plus AC, the B450 Gaming Pro Carbon AC has MSI’s RGB Mystic Light Sync, which can be customized via remote control, or through a mobile application on your phone or tablet. It has two sections illuminated by LEDs: one on the upper right edge, and one chipset backlight on the bottom.

You can currently find the AM4 compatible MSI B450 Gaming Pro Carbon AC at only $174, so be sure to give it a look if you want an overall powerful B450 motherboard to house your AMD Ryzen 3000 series CPU.