Which Motherboard Size Should You Choose? ATX vs Micro-ATX vs Mini-ITX 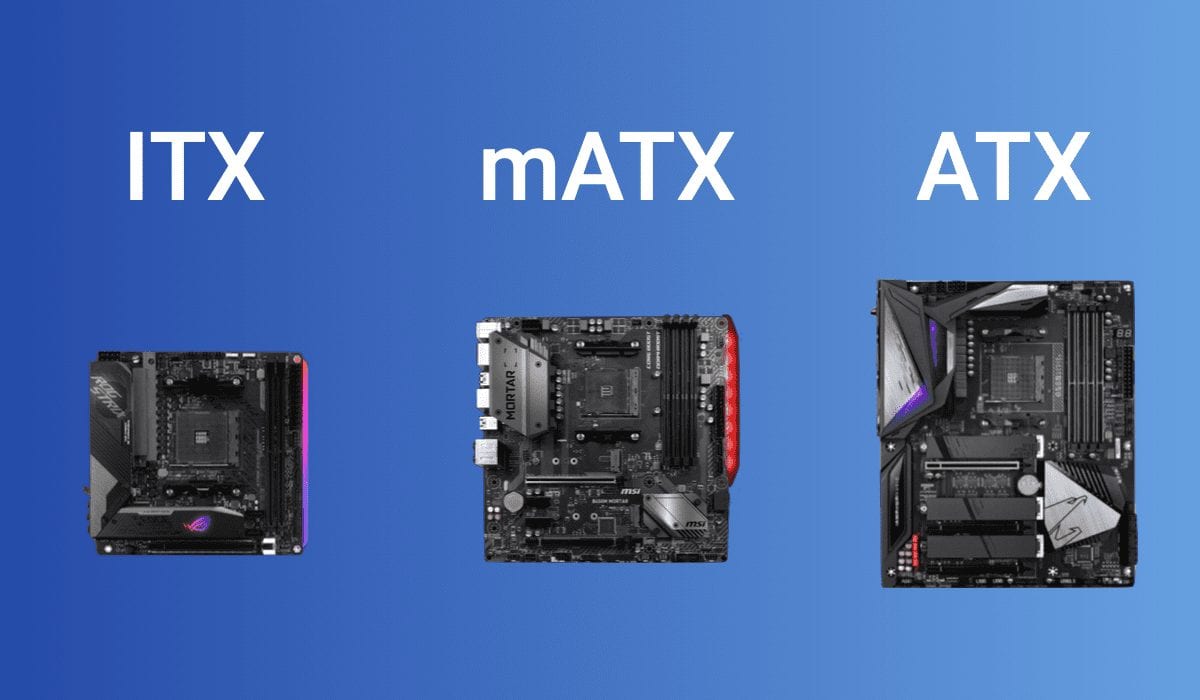 Choosing a motherboard is not an easy task. There are many factors to consider, and many aspects that need to be analyzed. Especially new PC builders can find that choosing a proper motherboard to be a daunting task, as these components are associated with plenty of technical terminology, and excessively over-the-top marketing, overloaded with information that is many times just fluff.

The most key aspects to look for in a motherboard are:

The form factor of the motherboard will not only determine the overall size of your PC, but it will also determine everything from: overclocking and upgrade potential, to RAM & ROM storage size, and even the cooling potential of your build. If you are currently debating what form factor to choose, this article will provide you with the four main questions you must ask yourself in order to reach a decision on which form factor best fits your style and preferences.

Contents hide
1 What is your budget?
2 Do you want your PC to be mobile or stationary?
3 Will your PC be flashy, or will it be quiet?
4 Are you planning on overclocking?
5 Related

What is your budget?

The first question, of course, is also the most predictable. The first thing you need to know before planning any new build is your budget – and there are some hidden costs associated with different motherboard form-factors.

ATX motherboards offer the best connectivity out of all three types, but they are typically more expensive than their smaller counterparts and they require larger cases to accommodate them, which also drives up the price.

Mini-ITX motherboards may cost less, but because they lack connectivity – like DDR4 RAM slots, M.2 SSD slots, and PCIe lanes – they will require a more substantial initial investment. For example, a mITX motherboard will typically have just two DDR4 Slots, whereas ATX motherboards will have four. That means that if you need 32 GB of RAM, you will also need to purchase them in two ranks (instead of four), since the ability to upgrade the RAM storage size will not be available. This means that it may be wise to purchase more RAM than is necessary at the time of their purchase. Because of the smaller size of mITX compatible cases, you may also need a SFX form factor power supply – which are typically more expensive than larger ATX PSUs – and an SFX compatible CPU cooler; together with additional fans – or liquid cooling – to keep the internal components at proper temperatures, since smaller cases tend to run hotter.

Finally, micro-ATX motherboards will typically be cheaper than the other two options, but they feature four RAM slots & plenty of connectivity; and they can also be placed in different cases ranging from micro to midi towers (or even mini-towers in some cases). These motherboards are  cheaper in price, so they do make for more cost efficient options. The downside is that they are  lower end motherboard models, so they will have fewer PCIe slots, weaker VRM & cooling solutions, lower-end audio chipsets, and may lack WiFi networking.

Do you want your PC to be mobile or stationary?

So, ultimately, mITX motherboards are the more expensive options, when compared to either micro-ATX or ATX form-factors, but they have a smaller footprint, and therefore more portability. If, for example, you have an office separate from your home, and want to be able to transfer your PC between these two locations, a small form factor (SFF) case can easily be relocated. Of course, there are also mini-towers (and even micro-towers) that can easily be moved, since options do exist that even include a handle for easier transfer. ATX cases are much more difficult to carry, as they are considerably larger and heavier than the aforementioned form factors; but their upsides lie in their better connectivity and wider range of compatibility.

If your case will be stationary,  then an ATX motherboard and case is almost a no-brainer. There are few reasons to purchase a smaller case if you do not have the intent of it being mobile
: which would be the budget, or the looks – and this leads to the next question:

Will your PC be flashy, or will it be quiet?

Preferences in appearance are always in the eye of the beholder, so some will want to make something like a large build with a tempered glass side panel and plenty of RGB lighting, while others may find a smaller, sleeker, and perhaps monochrome case to be more to their liking. These preferences do play a role in the choice of a motherboard, due to budget considerations, the overall size of the case, and the lighting that the motherboard itself can support.

If you’re looking to add as much pizzazz as you can get – and don’t mind sacrificing a bit of the motherboard’s functionality, or the ability to properly overclock your CPU – then a micro-ATX  build will give you a bit more budget leeway and space to plan out the RGB effects.

ATX motherboards may cost a bit more, but they will provide additional RGB lighting (on the motherboard itself) and room between hardware components that can allow for different setups for liquid cooling.

Last but not least, we have the most expensive of the three options, but arguably the most stylish: the mITX motherboards and their accompanying SFF cases. These cases can cost more than the motherboard itself, and if you want yours to allow for both style and functionality – like perhaps a Thor Mjolnir or a Sliger SM550 – then you will be paying upwards of two-to-three hundred dollars for the case alone. That being said, having both a small footprint and a sleek design can make for an excellent combination.

Now, if you see a PC as a practical piece of machinery, rather than a centerpiece for your desk, then chances are that you will also prefer to have a quiet build, rather than a flashy one. Silent builds also require specialized hardware components, including the case they will be placed in. Midi-towers will generally have less noise emissions, due to the fact that they have more sound dampening materials (larger panels), more ventilation, more space between components, and more sufficient cooling. Smaller cases will ultimately be noisier, due to the factors above, but there are exceptions to the rule: like Fractal Design’s Define Nano S: an ITX case (that only takes mITX motherboards) which is surrounded by sound dampening panels and allows for a 160mm CPU cooler & up to six case-fans (4x 140mm, 2x 120 mm).

Are you planning on overclocking?

If you plan on overclocking your CPU regularly, certain motherboards will definitely be better than others, due to their VRM and cooling solutions. The VRM is a buck converter than throttles +5 / +12 V potential to the lower values needed by the CPU. A poor VRM solution may result in insufficient voltage supplied to the processor, unwanted shutdowns, and instability. Additionally, if the MOSFETs, chokes, and capacitors are not heatsinked, the subsequent overheating can cause these components to deteriorate and have shorter lifespans.

If you want to avoid bottlenecking your CPU’s overclocking capabilities, you will want a high end VRM solution, with all the components being heatsinked, and perhaps even a heatpipe or PCH fan for additional cooling. The motherboards that are most-guilty of not heatsinking their VRM components are the micro-ATX variants, which generally should be ignored if you plan on overclocking your CPU in the future. ATX and mITX motherboards can have excellent cooling, depending, of course, on their price and model.CONCLUSION

To sum things up, if you want a motherboard for a stationary PC with a good VRM solution, that can become either stylish or silent depending on your preference – and that comes at a decent overall price – then ATX motherboards will be best for your needs. You will have an easier time setting it up, extra space for better connectivity, and far more motherboard models to choose from.

On the other hand, if you are looking for a motherboard – and overall PC build – on a budget, and don’t mind missing out on overclocking potential or connectivity, a micro-ATX build is the way to go. This will allow you for more leeway to make your PC either extra stylish, or silent, and will give you a wider range of compatible cases to consider.

Finally, if you want a premium PC build – and don’t mind spending a bit more in order to attain one – then a mITX build can be incredibly powerful, sleek, and convenient. If these motherboards are to be placed in a SFF case, then scrupulous planning must be made to ensure all components fit, and that you have sufficient memory, storage, and cooling. They can offer high-end overclocking potential, fit full-sized GPUs, and they can be transferred from one area to another on a whim. They  do have limited connectivity and may be a bit noisy, depending on the case, but if you see this as a small price to pay for what they offer, than an ITX motherboard is definitely an excellent option to consider.