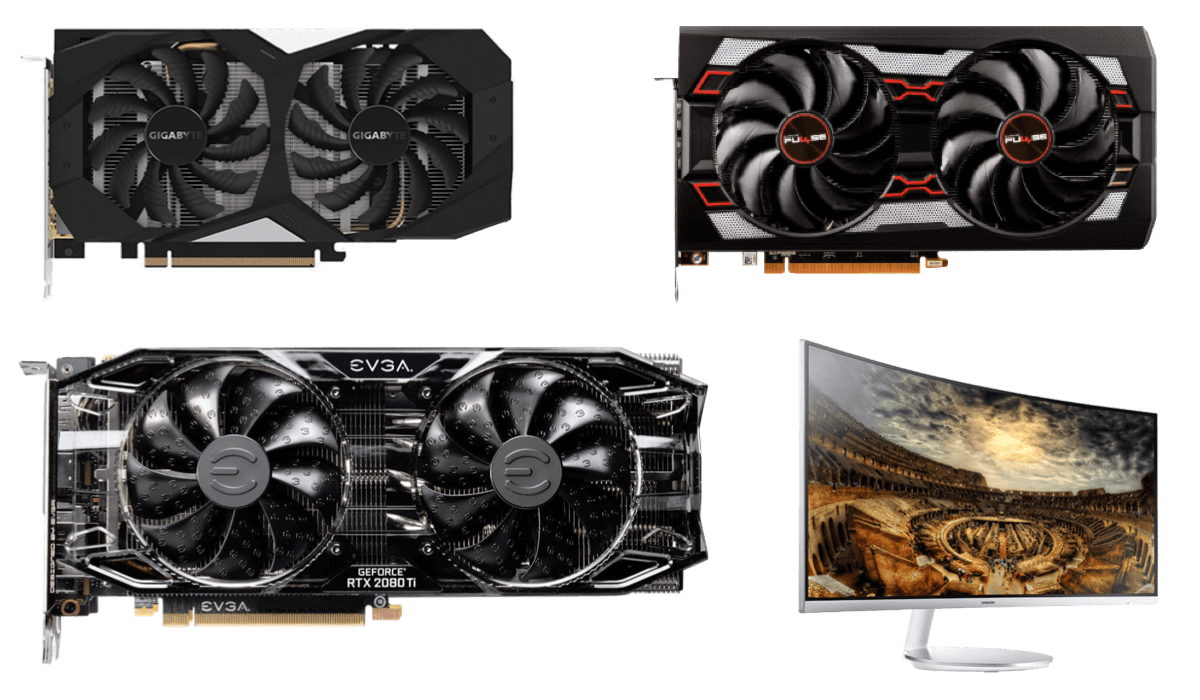 The world of gaming has recently undergone a huge shift when it comes to acceptable standards. While gaming in 1080p at 60 Hz used to be an absolute necessity and what everyone was used to, the time for 1080p is now over.

Instead, it is now the time of 1440p ultra-wide gaming (3440 x 1440 resolution) – even favoured over 4K 60Hz gaming on a standard 16:9 aspect ratio. There are still plenty of people not yet converted to the sheer majesty and otherworldliness of ultra-wide gaming, with the 21:9 aspect ratio being so encapsulating. Still, over time their numbers will diminish, and there will be more ultra-wide setups than ever before in 2020.

To be able to get to that point, however, you first need a good GPU that can handle 1440p ultra-wide gaming. But which GPU should you go for? How are you supposed to know what 1440p ultra-wide compatible GPUs are worth it for the money?

Here’s a handy guide of our personal recommendations for the very best GPUs that are ready and able to handle 1440p ultra wide gaming, at different price points and types of PC build – such as the best budget, price/performance and high-end graphics cards for 3440 x 1440 gaming in 2020.

For most people that have had regular-sized, 16:9 aspect ratio monitors and gamed with this ratio their whole lives, ultra-wide likely doesn’t seem that interesting. After all, what could be so great about playing a game with a wider display?

While it hasn’t yet become the mandatory expectation to use ultra-wide, and while it does have some problems for those that prefer to play competitive shoots due to the visual distortion, the days of regular 1080p gaming are numbered, even for budget builders.

A Note About CPUs For 1440p Ultra Wide Gaming

One thing to consider about your general build spec when you are considering upgrading to the 1440p ultra wide gaming lifestyle is your CPU.

While the main bottleneck when it comes to this new mode of gaming is going to be your GPU, you are still going to want an excellent CPU to be able to handle it. You can’t just rely on your old i5 processor anymore; you need a high number of threads to maintain your newfound high refresh rate, as well as the sheer CPU requirements of having such a massive ultra wide monitor.

It’s totally worth it, though.

So make sure that you budget for a decent quality CPU as well. We have a number of guides already recommending the best CPUs to pair with various graphics cards, such as the RTX 2080 Super or the RTX 2060 Super.

The GTX 1660 Ti was another long-awaited GTX release last year, offering up the latest and greatest of the NVidia Turing architecture at a surprisingly decent price point.

Boasting a memory speed of 12 Gbps and a boost clock of 1770 MHz, this GPU attempts to compromise on some of the long term future proofing for a better return on your investment.

While some people might consider it a bit of a stretch, the 1660 Ti has more than enough power to comfortably perform admirably and give you a high frame rate when enjoying ultra wide gaming, albeit at slightly lower graphics settings.

This GPU should probably be considered the lowest point at which you can easily play your games in ultra-wide setting with any reasonable expectation of a good frame rate. Thankfully, its cheap price point of around $280 makes it an easy decision to pick it up in 2020.

The RX 5700 XT was previously a GPU that most people considered pretty excessive when it came to gaming. While it did offer up some great advantages to its competitors, and indeed its own cousin in the RX line, the RX 5700, the XT was simply too expensive.

Paying a few extra hundred dollars for what was, at the time of release, a small power increase just wasn’t really worth it for most people compared to the RX 5700.

However, now that the RX 5700 XT has been out for close to a year now, the price has dropped, and it has become more worth it than ever. With a boost clock of up to 1925 MHz and an active memory of 8 Gbps, this GPU has all the power necessary to make ultra-wide gaming a reality, while still not completely breaking the bank. Our recommended price/performance RX 5700 XT card (as found in our RX 5700 XT AIB card comparison article) is the Sapphire RX 5700 XT Pulse.

If you’re looking for the Nvidia counterpart, we would recommend the RTX 2060 Super – also highly recommended by the PremiumBuilds team for 1440p ultrawide gaming whilst still on a moderate budget.

While the No.1 GPU to get for high resolution and ultra wide gaming used to be the GTX 1080 Ti, it has since been utterly superseded by the monstrous RTX 2080 Ti.

This is the GPU to end all GPUs, boasting incredible frame rates, a memory of 11 Gbps, and solid, chunky fans to boot in many decent AIB 2080 Ti models.

The only problem with this beast of a GPU is its frankly insane price point. Released at a $1200 price point,t his GPU has failed to really fall in price, making it still one of the most expensive options out there for graphics cards. with the cheapest RTX 2080 Ti – the EVGA RTX 2080 Ti Black Gaming – retailing at $999.

However, if you don’t care about your actual budget and just want a GPU that will play beautiful games at 144 fps in ultra wide at the highest settings.; this is the GPU to go for. IF you can afford it, maybe even spring for a cooling water system to help keep its heat down and temperatures cool. If interested, our recommended water blocks for the RTX 2080 Ti can be found here.

While it can become almost unbearably noisy if you lack adequate air circulation, this GPU will transform your gaming room into a dazzle of lights and immersive visuals, transforming whatever you are playing into an otherworldly, majestic experience.

If only it weren’t so terribly expensive, it would almost be worth it. If you can find a RTX 2080 Ti for under $1100, we would recommend it – otherwise, we recommend opting for the RTX 2080 Super as it offers better value but only a slight reduction in performance.