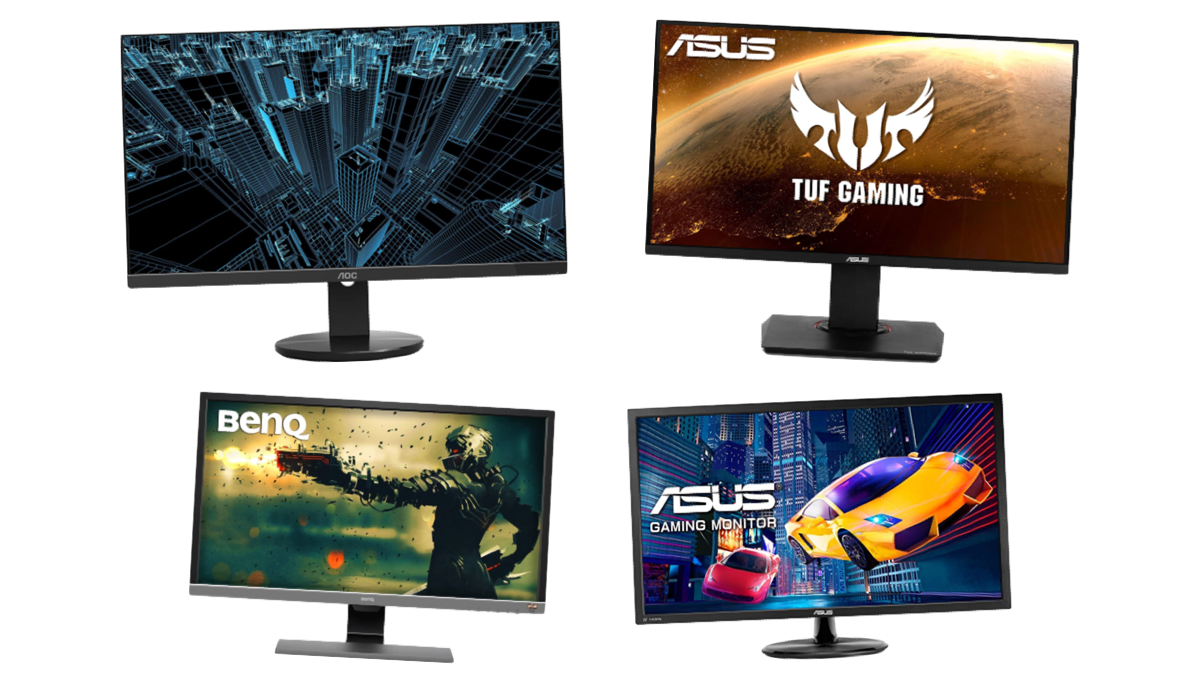 As monitor display technology advances, 1080p resolutions are gradually becoming antiquated, and 4K monitors are taking their place. The only thing holding back this resolution, is the price of the hardware needed to make full use of 4K monitor capabilities – at least when it comes to gaming. Current generation Sony and Microsoft gaming consoles can only support 4K resolutions at 30 FPS – and that is for their upgraded iterations. With the release of the next-gen Xbox Series X and Playstation 5 consoles, both companies have stated that their products will be capable of display 4K resolutions at 60 FPS; though it’s difficult to state that this would be the case for all the games that are released on their consoles. Processing a game at high frame rates and resolutions is very much demanding in regards to processing power. It is currently impossible to display framerates above 60 FPS, at 144 Hz for example, for triple-A titles without the use of multiple GPUs. Even the Nvidia RTX 2080 Ti cannot handle 144 Hz framerates at such high resolutions for graphically demanding games. To provide an example of a relatively recently released game, let’s look at Call of Duty: Warzone requirements and benchmarks.

ComputerBase shows us that even with an Intel i9-9900K and 32 GB of 3200 MHz CL 14 DDR4 RAM, the Nvidia 2060 Super would still not make the cut for 60 FPS at 3.840 x 2160p resolutions; while the mighty RTX 2080 Ti only averaged 92.3 FPS. The current sweet spot for 4K 60 FPS gaming, in regards to a price & value ratio, appears to be the RTX 2070 Super. It won’t always reach the 60 FPS mark, but it will do so on average. Luckily, with the new generation of hardware coming out within the next year: like Ryzen 4000 series CPUs, DDR5 RAM, and Nvidia Ampere 3000 series GPUs, the transition toward 4K resolutions at even higher framerates is soon rather imminent.

As mentioned, for gaming applications the processing power required is significantly higher than, for example, streaming at 4K resolutions, where even an integrated graphics processor like the Intel UHD Graphics 630 on an i5-10400 CPU can handle the task at 60 Hz framerates. Indeed, the cost for making a home theatre PC (HTPC) that can handle streaming services like Netflix at high resolutions has dropped significantly. So, whether it be for next-gen high-resolution gaming, video and movie streaming, or even just office work or image/video editing, now is the best time to invest in a 4K 60 Hz monitor. Luckily enough, with the current price drop for 4K monitors, you won’t need to invest too heavily in order to enjoy ultra HD resolutions. To help you pick the best 4K monitor for your setup at a reasonable price, we’ll provide a list of the four best budget-friendly UHD monitors available.

If you play video games competitively, for e-sports or with friends, you are going to want a 4K monitor the least amount of input lag. For such demands, look no further than the ASUS VP28UQG. This 28-inch monitor allows for Adaptive Sync/Free Sync, as well as Nvidia’s equivalent G-Sync.  This means stuttering, screen tearing and frame drops will not affect your display no matter what brand of GPU you use.

Now, this monitor uses a TN (Twisted Nematic) panel, meaning that it will have exceptionally low response times, but will fall behind VA and IPS panels in regards to contrast and color range, as well as in the range of viewing angles. However, the latter will hardly be an issue for a flat-screen 28-inch monitor which is meant to be viewed solely from the front. The contrast ratio of this screen is 1000:1, the color range is 1073.7M colors with a 10-bit color depth – with peak brightness level measures at 300-nit – and a viewing angle of 160 (V) / 170 (H) degrees. This trade off in color range and contrast is well worth it for gamers, as this screen has a 1ms GtG response time and input lag of only 9ms. To help reduce eye strain, the VP28UQG also comes with a flicker-free backlight, as well as ASUS’s Eye Care technology which has various levels of blue-light filters.

In addition, this ASUS 4k 60Hz monitor comes with a host of different features optimized for gaming, such as Game Plus: which provides a customizable crosshair for first-person shooters, an on-screen timer, an FPS counter, and even pre-calibrated picture presets that you can use for gaming, watching movies, or even reading. The backside of the monitor has a 5-way joystick which you can use to quickly navigate through the menus as well. Though the VP28UQG does not come with built-in speakers, it does have two HDMI 2.0 ports, a DisplayPort 1.2, and an audio jack. Given that you can currently purchase this monitor for only $255, really goes to show how far 4K resolution monitors have come. Definitely a must buy for competitive gamers looking for an UHD display.

Currently on an incredible sale, the BenQ EL2870U is a 28-inch flat-screen UHD monitor with FreeSync, G-Sync, and HDR10 compatibility. Much like the aforementioned ASUS VP28UQG, this monitor also features a TN panel, which comes with its respective upsides and downsides, as previously mentioned.

The upside here, once again, is the incredibly low input lag this monitor features. DisplayLag’s benchmarks proved that the BenQ EL2870U monitor has the lowest input latency achievable in a 60 Hz display: only 9ms of total input lag. In order to better the display’s contrast and vibrancy, the monitor uses Brightness Intelligence Plus Technology, which will auto-detect the ambient brightness and color temperature of your surroundings in order to adjust the display settings accordingly.

Though it may not reach the contrast ratio and color spectrum of VA or IPS panels, this monitor certainly pushes the limits of a TN display (just make sure to set the gamma to zero to prevent grayscale issues). A display of 1.07 billion colors, a 10-bit color depth, a peak brightness of 300-nit, and a 1ms of Grey-to-Grey response time, combined with low blue light and flicker free technology, make this display look great despite its budget price and low-latency TN panel. Connectivity-wise, the monitor has two HDMI ports, one DP 1.2 port, and is VESA compatible, so it can be mounted to a wall as well.

What is even better than all the above, is the current price of the BenQ EL2870U 4K 60 Hz monitor: $299 (down from its original $499 price tag). Once again competitive gamers that don’t mind investing an extra $33 (from the $256 of the ASUS VP28UQ) for HDR10 compatibility will find this BenQ monitor to be ideal for gaming and video streaming alike.

If you are not that into competitive gaming, and would rather sacrifice some response time and input lag for a wider array of colors, as well as better viewing angles, then a 4K IPS monitor will definitely suit your needs better than the aforementioned TN panels. In that case, few monitors can rival AOC’s U2790VQ flat display, 27-inch, 4K resolution, frameless IPS monitor.

Though the U2790 has a higher, 5ms response time, in comparison to the 1ms of the two aforementioned TN monitors, its display features over one billion color with its 10-bit expanded color depth. It has a 178/178 degree viewing angle, a static contrast of 1000:1 (20M:1 dynamic) and a brightness of 350 nits. It covers 99% of the sRGB color range, as well as 90% of the NTSC color gamut.

If you’re looking to make a fancy 4K resolution multi-monitor setup, then the AOC U2790 is probably the best monitor to use for the setup. Its 27-inch size is not too large, and not too small for 4K, while its three frameless sides allow for it to blend seamlessly with adjacent monitors, and its IPS panel won’t obstruct the viewing angles of the side monitors. Add its economic price tag to the mix, and you have the perfect monitor for the job.

Included with the AOC U2790VQ is a 1.8-meter (~5.9 feet) HDMI 2.0 cable, and a VGA cable of identical length. Connectivity-wise this monitor, unfortunately, has only one HDMI 2.0 port, sacrificing a second 2.0 slot for an HDMI 1.4 port – which should not be of much use for a 4K resolution monitor. For its current price of only $249, the AOC U2790VQ is tough to beat in terms of overall value, especially for a workstation, multi-monitor, setup.

If you don’t mind spending a bit more for some added utility, and versatility from your monitor, then the ASUS TUF Gaming VG289Q 4K display will work wonders for a hybrid setup.

Despite the word “Gaming” in its name, the VG289Q features an ergonomic design, allowing the screen to tilt from +20 to -5 degrees, pivot from +90 to -90 degree – so it can also be used as a vertical screen for multi-monitor setups (especially with its thinly framed side borders), and it can swivel from +62 to -62 degrees, making it ideal for multiple hours of screen time associated with work. Its height can also be adjusted from 0 to 150mm in height. Its HDR10 compatibility with DCI-P3 (90% color gamut) can change between cinematic HDR and gaming HDR, in order to optimize the viewing experience for both gaming and video streaming. For gaming, ASUS has seven preset display modes via their GameVisual Technology, which can be accessed through a hotkey for quicker access. In addition, with ASUS’s Shadow Boost Technology, darker areas within games will have higher clarity without the overexposure of lighter areas. Finally, FreeSync and G-Sync are both also supported, together with all the previously mentioned gaming features of the ASUS VP28UQG.

The max brightness it can reach is 350-nit, and its 10-bit depth support allow for a range of 1.07 billion colors (8-bit and FRC). The contrast ratio of this monitor sits at a static 1,000:1, and its Gray-to-Gray response time is measured at 5ms; though the monitor’s overall input lag ranges at around 22ms (measured by Tom’sHardware) – which may seem like a lot, but it is actually decent and near imperceptible for most gaming applications.

The ASUS TUF Gaming VG259Q also includes two built-in 2W speakers, two HDMI 2.0 ports, one DP 1.2 port, one audio jack, and an ASCR dynamic contrast option. Given the overall value of this monitor, even its higher $329 price range (when compared to previous options) is well worth the investment, especially for those looking to work/study and also game on the same monitor.