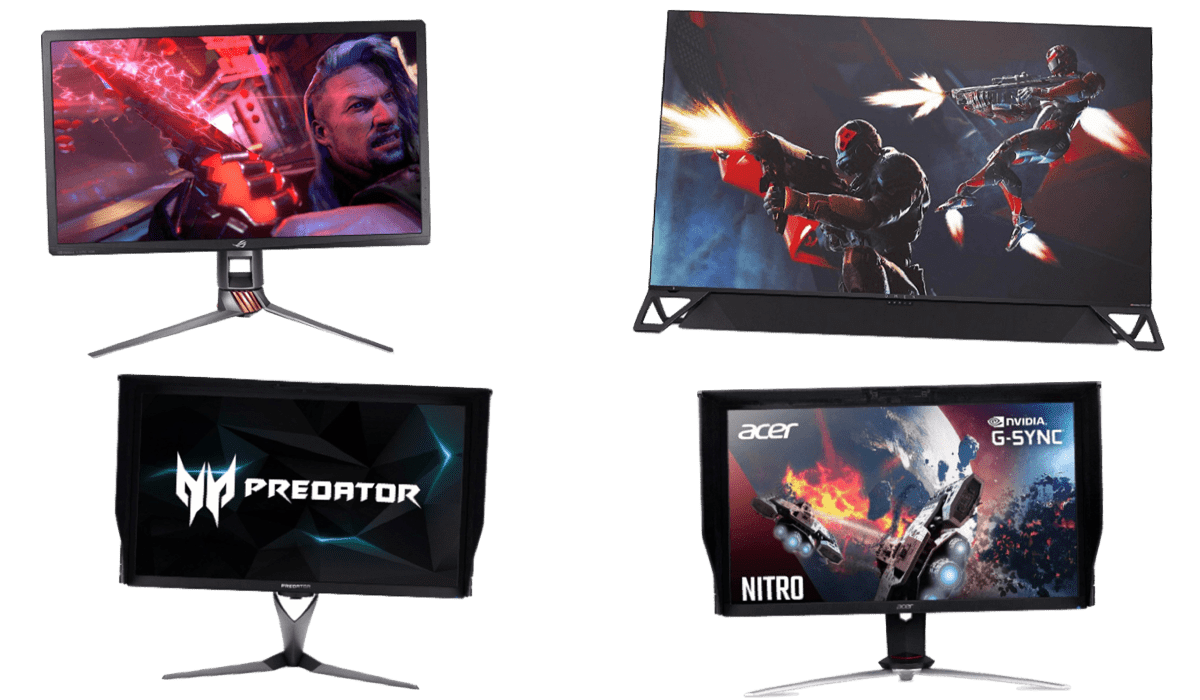 Looking to compliment your high-end gaming PC, with an equally top-of-the-line high-end gaming monitor? Well then, you are going to want a monitor with 4K UHD resolution, paired with a buttery smooth 144 Hz refresh rate, for a visual spectacle that won’t compromise your gameplay.

Currently, gaming hardware – and even ROM storage units – are struggling to keep up with the ever-increasing technology in display resolutions offered by high end monitors. With 8K resolutions soon to become a new standard for television and PC monitors alike, producing GPU technology to match these developments is an ongoing struggle.

To take full advantage of a 4K 144 Hz monitor – and have your games run on their Ultra settings at a proper 100+ FPS range – you are going to need an NVLink and a multi-GPU set-up. The minimum build for such a feat would require utilizing two RTX 2070 Super GPUs, while the recommended build would be using two RTX 2080 Ti GPUs, in order to reach that 120+ fps range.

That being said, let’s take a look at the current 4K 144 Hz monitors for gaming in the market, so you can get a better idea of what’s available, and better compare your options in 2020.

Starting with the cheapest monitor of the bunch, the Acer Nitro XV273K is a 4K 144Hz, 27-inch, monitor, that comes at only a fraction of the price of equivalent competing monitors. Its native refresh rate is 120Hz, but can be overclocked to 144Hz, and features a 1ms VRB response time. The panel is an IPS display, with 350 cd/m2 brightness, over 1 billion colors, and a dynamic contrast ratio of 100 million to one (1000:1 CR), and is HDR 400 compatible (but not at 144 Hz).

Perhaps what is most impressive about this monitor, is the extremely high DCI-P3 coverage, which is upwards of 90% and allows for the display of intense colors that other monitors fail to create. Another great feature is FreeSync (AMD), or G-Sync (Nvidia), which is an adaptive synchronization technology that reduced tearing and stuttering caused by discrepancies of frame rate between content and monitor. In regards to speakers, it does include two 4-Watt speakers, which are decent, but not recommended.

All that said, the cheaper price of the Acer Nitro does come with a few downsides. Many users have experienced a glow or backlight bleed inherent to the IPS panel, especially around the corners. Another downside is that using FreeSync/G-Sync disables the monitor from using its overdrive capabilities, so it cannot be used at 144 Hz. Same goes for the 1ms VBR response rate, and the HDR display as well.

The Nitro XV273K does currently come at a $699 price range, which – depending on the case – may overshadow these minor defects.

NOTE: Acer does also have the XB273K Predator model, which provides a better default response rate when the 1ms VBR isn’t active (4ms GTG), and all the same features of the XV273K, at a $773.99 price range. You can find this monitor here.

Next, we have Acer’s higher end model: The Acer Predator X27 UHD, IPS monitor. This model comes with a VESA certified DisplayHDR 1000, a 4ms Gray to Gray pixel response rate, and Quantum Dot technology, which allows for a higher peak brightness (1000 nits) and wider color gamuts than OLEDs. In fact, it offers 99% Adobe RGB color space, so the color accuracy is definitely there.

As with the XV273K, the monitor does come with a native refresh rate of 120 Hz, but can be overclocked to 144 Hz. It has 1.07 billion colors and a 1000:1 contrast ratio, as well. The greatest upside this monitor has in comparison to the previously mentioned displays, is the full-direct array backlight, helps considerably hide any glow or backlight bleed issues that are inherent to the IPS panel. This way, you can properly enjoy all the optical glory the DisplayHDR 1000 has to offer. To further emphasize this HDR display, it also has the upgraded Nvidia G-Sync Ultimate, which allows for 1000 nits of brightness, multi-zone backlight, and ultra-low latencies, that are altogether lacking in the regular Nvidia G-Sync.

The downside in comparison to the previous 4K 144Hz monitors? The price. Currently, at a price range of $1,299, it’s hard to tell if the rise in price is worth the upgrade, but if you want to avoid the backlight bleed issues, this monitor is a must.

NOTE: Acer does also have a 43-inch variant of this monitor, the Acer Predator CG437K, which includes a 10-Watt speaker, the 1ms VRB response time feature, a higher 4,000:1 contrast ratio, and a VA panel; but comes with the regular Nvidia G-Sync (not the ultimate), and lacks the quantum dot technology of the X27, so it has a far smaller color range . You can find this option at about $1350 currently here.

At a similar price range with the Acer Predator X27, the ASUS ROG Swift PG27UQ offers similar features to its 4K 144Hz counterpart: The resolution and refresh rate aside, it also comes with an IPS panel, DisplayHDR 1000 nit peak with Nvidia G-Sync HDR, Quantum Dot technology (again with a color space of 99% Adobe RGB), 1000:1 contrast (SDR), and 4ms of GTG response rate. It even has a similar local dimming solution, so the LED backlight is dynamically controlled and you don’t get the backlight bleeding or glowing.

The differences are in the details. With ASUS’s exclusive Aura Sync Lighting and a mini projection of the ROG logo on the desk below, you can have ambient lighting synchronized with other Aura-Sync components for some extra gaming glamor. Also, the ROG Swift PG27UQ includes an ultra-low blue light filter which reduces on-screen flicker and helps minimize eye-strain from the multiple hours of exposure to the screen.

Of course, there are downsides as well. The ROG Swift PG27UQ produces quite a bit of noise when the cooling fans are running, a noise that is far less noticeable than the Acer Predator X27. Also, the Acer Predator X27 is arguably more visually appealing than the ASUS ROG Swift, but beauty is in the eye of the beholder, so the judgment is yours to make.

The HP Omen X65 Emperium is a 65-inch monster of a monitor – and its massive size is both good and bad. Bad because if you are looking to use it as a PC monitor, it will be quite awkward. You would have to use a set of smaller monitors for up-close, and use this monitor in the distance for either gaming, or videos. It’s hard to imagine how one would work on their PC solely using a 65-inch monitor. Also, due to the massive screen size, the monitor has only 67 pixels per inch (PPI), meaning that the quality won’t be that great up close. Now the good side is that you may have a specific gaming setup that you are looking to make which features a large monitor – and having a 4k 144Hz option to fill that gap is great.

Another plus, is that the new generation of consoles is soon to launch, and this monitor can be used for the consoles, as well as the PC, since it has a massive port selection (3 HDMI, 2 USB 3.0, 1 Displayport, 1 PC Port, 1 SPDIF, 3.5mm.). Now, will the Playstation 5 and Xbox Series X be able to reach over 100 fps on a 4K monitor? Highly unlikely, but still, it will be an amazing monitor to use for the consoles, even if you can’t fully utilize the refresh rate.

The size of the monitor aside, the HP Omen X65 comes with many of the features mentioned for the Acer Predator X27, and ASUS ROG Swift PG27UQ: 1000 peak nit HDR, Quantum Dot technology, 384 zones of Full-Direct Array backlight, and a 4ms GTG response rate – difficult to find in large-sized TV monitors, a definite plus the monitor is to be used with a console.  An inherent difference is that this model uses a VA panel, instead of opting for IPS.