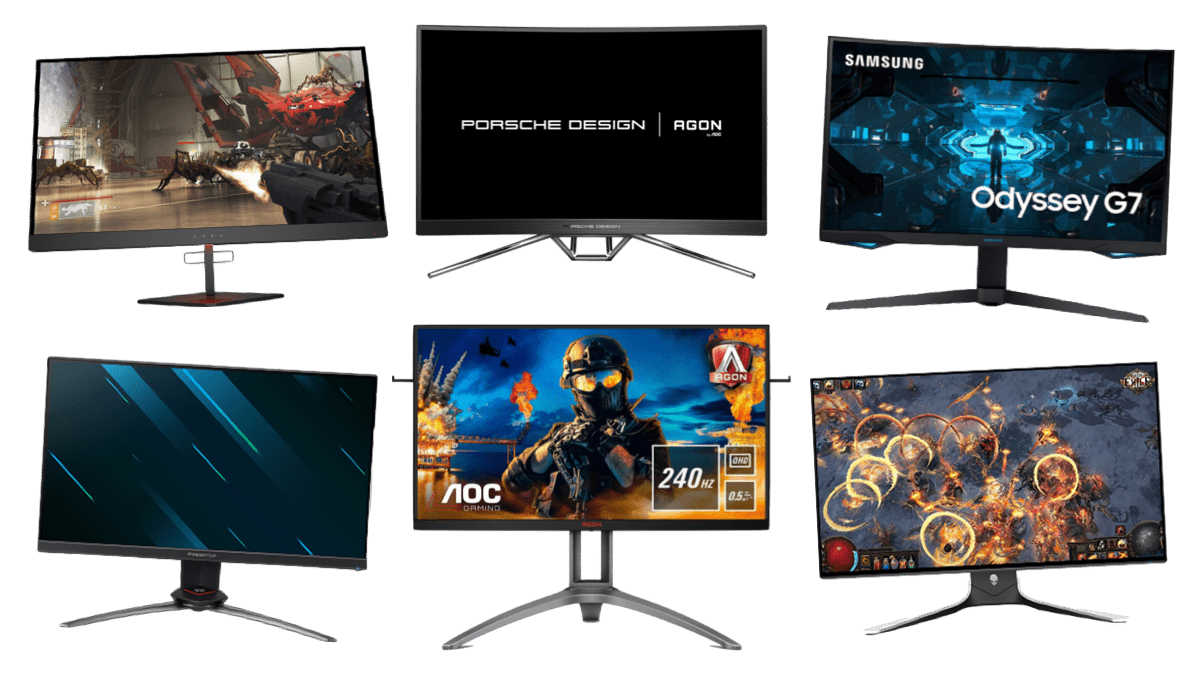 We spend a lot of time thinking and writing about monitors on this site. Along with core components like the GPU and the CPU, a monitor is one of the single most impactful pieces of technology for how you interact with your PC and your gaming experience. No matter how powerful the parts or expensive the build, if you do not have a display to match, you won’t get the most out of your gaming setup.

144hz has become the standard target refresh rate for gaming, and 2021 looks to be the year of 1440p 144hz as technology companies and games push for higher resolution to show off better graphics. High-end gaming will look to 4K as the next frontier, with producers like Nvidia already talking about their flagship products as ‘4K Gaming’ ready.

But while 4K is interesting, some gamers prefer even faster refresh rates for higher fluidity in game rather than additional pixels. We have talked about this in the past for 1080p 240hz gamers (like professional CS:GO players), but there is a new high-refresh rate option now available in the market: 1440p 240hz. Combining the super high QHD resolution with the mega-fast 240hz refresh rate, this could be the next high-end professional standard for gamers. Of course, running 240FPS at 1440p isn’t easy, so these monitors are for gamers that are spending big on their PC and want a display to match. All monitors in this article are 27”, which seems to be the sweet spot right now for this type of monitor.

There are more and more options coming to market, so let’s take a look at best 1440p 240hz monitors available today:

As there are not all the many available monitors yet, and most are based on the same couple of panels, the biggest factor in choosing your 1440p 240hz design is the panel type. As a reminder, there are three main panel types to choose from: TN, VA, and IPS. TN promises fastest response times at the cost of viewing angles and color richness, VA gives the best contrast but has ghosting issues, and IPS offers the best colors at a price premium and with the risk of backlight bleed. IPS panels in particular have come a long way recently to help become capable of gaming without awful ghosting, but TN remains the ‘gamer’s choice’ if you really want the best possible motion clarity and response times. If you view your monitor head on and are willing to do some manual color calibration, TN panels have a lot to offer. And for best TN-panel 1440p 240hz monitor, we recommend the AOC AGON AG273QZ.

TN panels get a bad rap from many gamers because of a perceived lack of color vibrancy, but for fast-twitch gaming at 240hz, the response time is unmatched. At 240hz, this means clarity for fast-moving pictures and quick reaction gaming without the risk of ghosting or blurriness. The AG273QZ epitomizes this thanks to its lightning-fast .5ms GtG response time (likely with some overdrive to get under a second on paper). The Freesync Premium ensures that for more demanding games that won’t hold 240hz stable, you won’t have screen tearing to distract you. And to top it off, and the main reason we chose this one over its competitors, is the HDR400 rating that is rare on a TN panel. This means that the picture quality and brightness will more than satisfy, even for single-player artistic games. Although not the least expensive monitor on our list at around $750 (currently low stock has inflated this), the value for a super high-end gaming monitor is hard to beat.

Another great option to consider for a TN monitor, if you can find it in stock quicker, is the HP Omen X 27. Not only is the naming scheme easier to manage, the monitor offers almost all of the same benefits as the AG273QZ. The big difference is the lack of official HDR rating in exchange for being around $100-$150 cheaper depending on the sale. If you don’t see yourself using the HDR features very often, that’s a pretty solid trade-off for another great 1440p 240hz monitor.

VA monitors were often seen as an in-between option for IPS and TN panels because they combined better colors (although not as good as IPS) with faster response times (although not as fast as TN). As IPS panels have improved their quickness dramatically, this thinking has fallen out of fashion and VA panels are less popular than three years ago. But some of the major producers still see the market for very strong contrast monitors that have good colors and decent speeds, and are able to be produced at a lower price point than IPS competitors. One major manufacturer in particular has doubled-down on their VA line as a flagship gaming product, and the results are impressive. For best VA-panel 1440p 240hz monitor, we recommend the Samsung Odyssey G7.

Samsung needs no introduction, and the Odyssey line may not either considering the amount of marketing that went into the launch of these gaming displays! Using a gently curved display, the G7 is about as good as it gets for a VA monitor. The features are formidable, with a curved HDR600 panel that promises even better contrast and dynamic range than the HDR400 AOC monitor above. Samsung claims a very fast 1ms GtG response time (likely with major overdrive so beware of ghosting), and a very well-built stand that offers tilt/swivel/height adjustment and portrait mode. All this is possible thanks to the QLED 1000R panel that is at the heart of the G7 which is what Samsung says makes this monitor unique. It’s more expensive than the TN-panels at $900, but is a small step up in terms of technological innovation and build quality. If you tend to play less fast-twitch games but want 240hz 1440p to have the best and like a curved screen, the Odyssey G7 from Samsung is the display for you.

As a bit of a wild-card alternative, Samsung sold the same 1000R panel to an AOC-Porsche Design collaboration that led to the creation of the Porsche Design AOC Agon PD27. With nearly identical specs to the Odyssey G7, but with HDR400 instead of HDR600 and a much less flexible stand, this monitor could be of interest to ‘fashion-forward’ gamers. Surprisingly, it also is $100 cheaper at $800. If you like the look and want to save a bit of money while still getting the main specs, this Porsche Design-AOC monitor could be a great buy.

IPS panels are quickly becoming the go-to because of the beautiful colors and increasingly competitive response times. As TN-monitors lose their only major selling point in speed and IPS panels continue to become more competitive in terms of pricing as well, we expect IPS to become the panel type of the future. And while we like to think our opinion matters, what is really telling is the movement of manufacturers to IPS for gaming. Spearheading this transition are several major sellers like Acer and ASUS, but also Dell. And for premium lines, one of Dell’s better-known subsidiaries. Our choice (for right now – read on for details) for the best IPS-panel 1440p 240hz monitor is the Alienware AW2721D.

Alienware typically means really high-end products, with a price to match, and this monitor is no exception. Whereas every other monitor in our article opted for the Freesync technology (which is great!), the AW2721D went for the more expensive G-Sync Ultimate certification that is the best adaptive sync tech available today. The stand is thicker and more of a design statement, and the bezels are almost non-existent, leading to a very eye-catching design. The core specs are phenomenal, with the Fast IPS-nano tech and HDR600 to match the 1440p 240hz display. Everything about this just feels high-quality, which is the point of the Alienware brand! Compared to other monitors, this one is similar to the Odyssey G7 in its target market, and the price point of $900 reflects that, although we have seen sales as low as $775 in the past. At not much more than the TN-panel and with nearly similar specs, it’s hard not to say this is the best 1440p 240hz monitor you can buy.

There is one upcoming monitor that we are really excited about and wanted to mention here as an alternative to the AW2721D – the Acer Predator XB273U GX. The IPS panel can be overclocked up to 270Hz, is G-sync compatible, features HDR400, and promises lightning-fast response times. Based on the initial reviews and the specs, this seems like it could be the monitor to beat and the overall best 1440p 240hz monitor once it is more widely available. Oh yeah, and perhaps our favorite part? MSRP is $700, making it one of the least expensive monitors in the category while packing one of the most powerful punches. Keep an eye out for this monitor (or head to a Micro Center if you’re lucky enough to live near one!) if you have some time to buy and want to go for the latest and greatest.

Even if 1440p 240hz remains an ultra-high-end experience that few gamers want and even fewer will get, it’s exciting to see the progression of tech on both resolution and refresh rate. Nvidia Ampere GPUs promise to push us firmly beyond 1080p gaming, and while 1440p 144hz seems the likely gold standard for gaming for the upcoming future, more niche monitors like 4K 144hz or 1440p 240hz will have their place for competitive gamers.

As always, make sure you check full specifications before buying and avoid buying from unknown third-party sellers that may sell you out-of-warranty products. If you are going for best of the best in your battlestation and want an ultra-fast monitor to match, these monitors will cost you but give you one heck of a gaming experience!